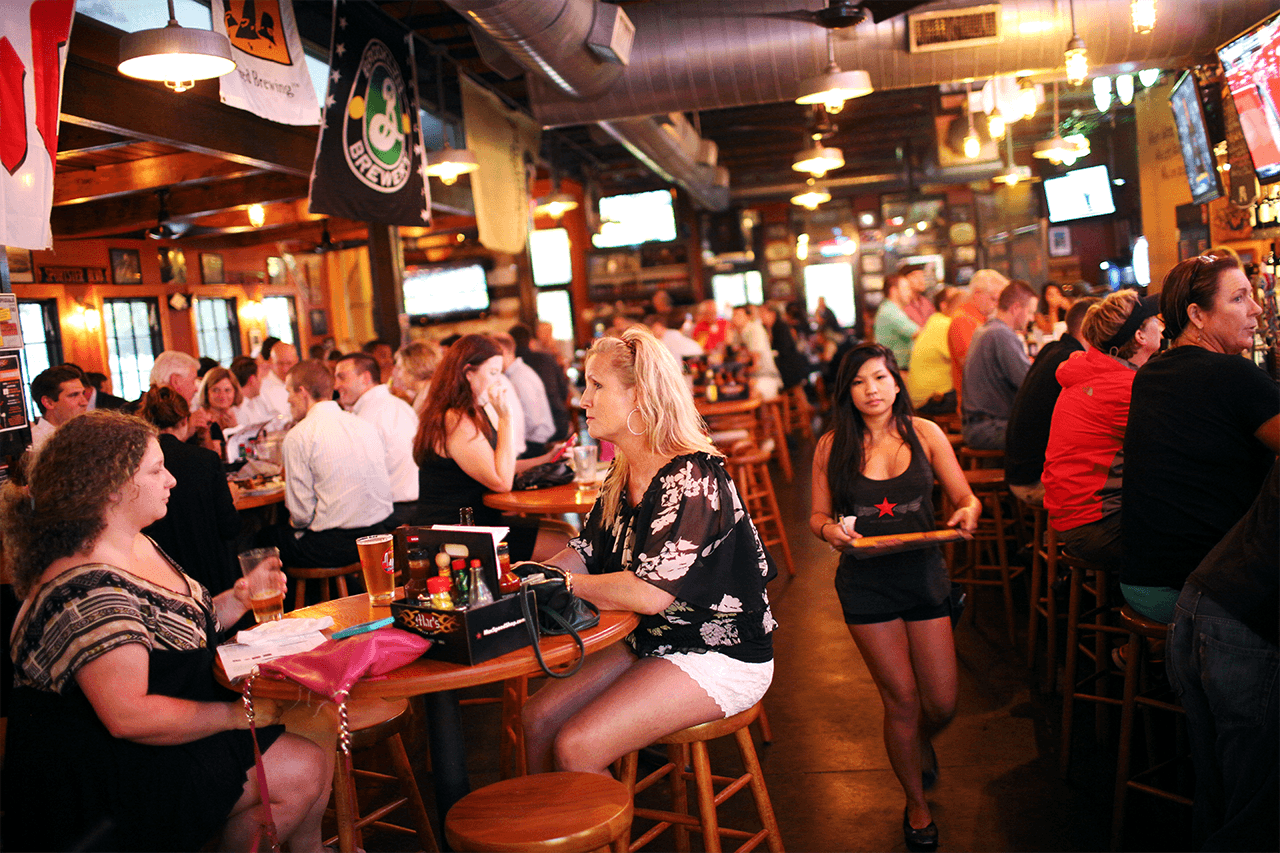 If you can’t be happy in Charlotte, you never will be, because there’s a good life waiting for you here if you’re willing to spend time looking for it. Some lives are easier to find than others. If building skyscrapers is your thing, for instance, there’s plenty of that going on, and you’re bound to meet folks who share your interest. If you’re into money — making it, talking about it, wearing it, or living in it — there’s a ton of that here, too. And even if your interests skew toward the bizarre — some people think that watching cars drive around in circles is a sport, believe it or not — look no further.

And if, like me, barbecue is your hobby, Charlotte might be a great spot to relocate, because there’s a lot of it. North Carolina law won’t let you incorporate even as a tiny town without at least one barbecue joint within city limits, so a city the size of Charlotte is legally required to have dozens of them, and it does, and some of their barbecue is actually good; Mac’s Speed Shop on South Boulevard has some of the best. 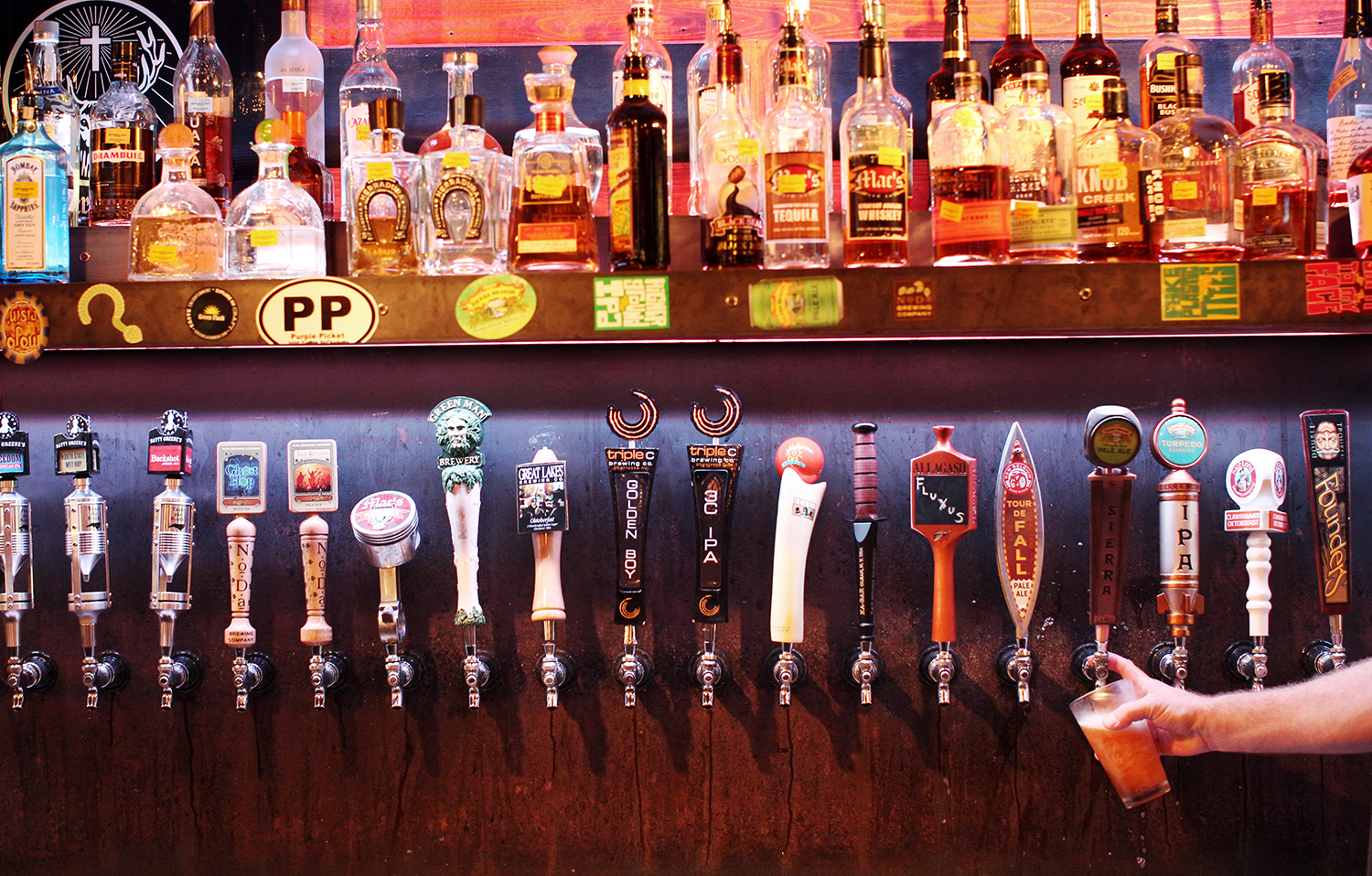 Beer drinkers should allow some time to sort through selection at Mac’s. The sports bar has more than 300 brews, on tap and in bottles. photograph by Travis Dove

I was surprised at how good it was, actually, because food is usually an afterthought at a place like this, though it’s hard to say exactly what kind of place a place like this is: Mac’s is different. It’s refreshingly Frankensteinian. It’s not a traditional barbecue joint with the red-checkered tablecloths and mammoth glasses of sweet tea and a family history in pork that goes back generations. Mac’s (named after the guy who used to work the old transmission shop the joint is housed in) has been around for less than a decade, which is a millisecond in barbecue time, and the pitmaster (hold on to your trucker hats, folks) comes from Pennsylvania. With its four big-screen televisions and world-class selection of beer — more than 300 craft beers are represented here — it could be a sports bar, but it’s not that, either. It could be a biker club or a happy-hour hangout or a place you’d take your family on a Tuesday night — but it’s none of these things, and all of them. As David Jewell, one of Mac’s five owners, told me, “Everybody’s welcome here: white collar, blue collar, and no collar.”

All collars come
Watching customers float in and out of Mac’s during the course of several hours is like watching time-lapse photography of Charlotte’s cultural strata. Bankers, bikers, and bubbas sit together at a long banquet-style table toward the back, watching a football game, while Black Sabbath gently purrs from the state-of-the-art sound system; behind them is an open kitchen dominated by a hickory-burning smoker. It’s an odd and oddly appealing place.

It’s a place well-loved by the Queen City. Kevin Kuruc, the transplanted pitmaster, is responsible for smoking 3,500 pounds of pork butts, 1,500 pounds of brisket, 950 pounds of St. Louis ribs, 1,000 pounds of chicken, and cooking about 1,500 pounds of macaroni and cheese a week. He’s a busy man: Mac’s has four other locations from Fayetteville to Greenville, South Carolina, and he’s the cook for all of them. He’s traveling constantly. He also has an understanding wife, but he sees her less frequently than he does his pork butts. He talks about her all the time, though, and I think it’s important she knows that.

Like so many neighborhoods in Charlotte, the one where Mac’s lives has come up in the world. When Mac’s opened in 2005, there was a strip bar next door and a methadone clinic across the street. Now there’s a Burger King and a condo. But Mac’s hasn’t lost its edge, even though it may have been tempered over time. All five owners are motorcycle enthusiasts, and every Wednesday and Thursday night they host Bikers’ Night. This sight alone is worth a visit to Mac’s. Half-a-hundred gleaming hogs (an accidental pun, I promise) line up beneath the canopy outside like colorful stallions arrayed, a band playing on the patio. One hundred and fifty bikes come on a good night. The night I was there, I strutted among them like an aficionado, though I’ve never been on a motorcycle in my life. No one could tell, I don’t think.

Award-winning sauce
The menu is extensive and fun and, without a doubt, has something you want on it. Kevin told me that even vegetarians eat at Mac’s, which seems a stretch to me, but I believe everything Kevin says because he has that kind of face and a guileless enthusiasm for his work. Mostly, the menu is about inventive ways to package pork and chicken, like Mexicue, which is a lot like what you might imagine it to be. 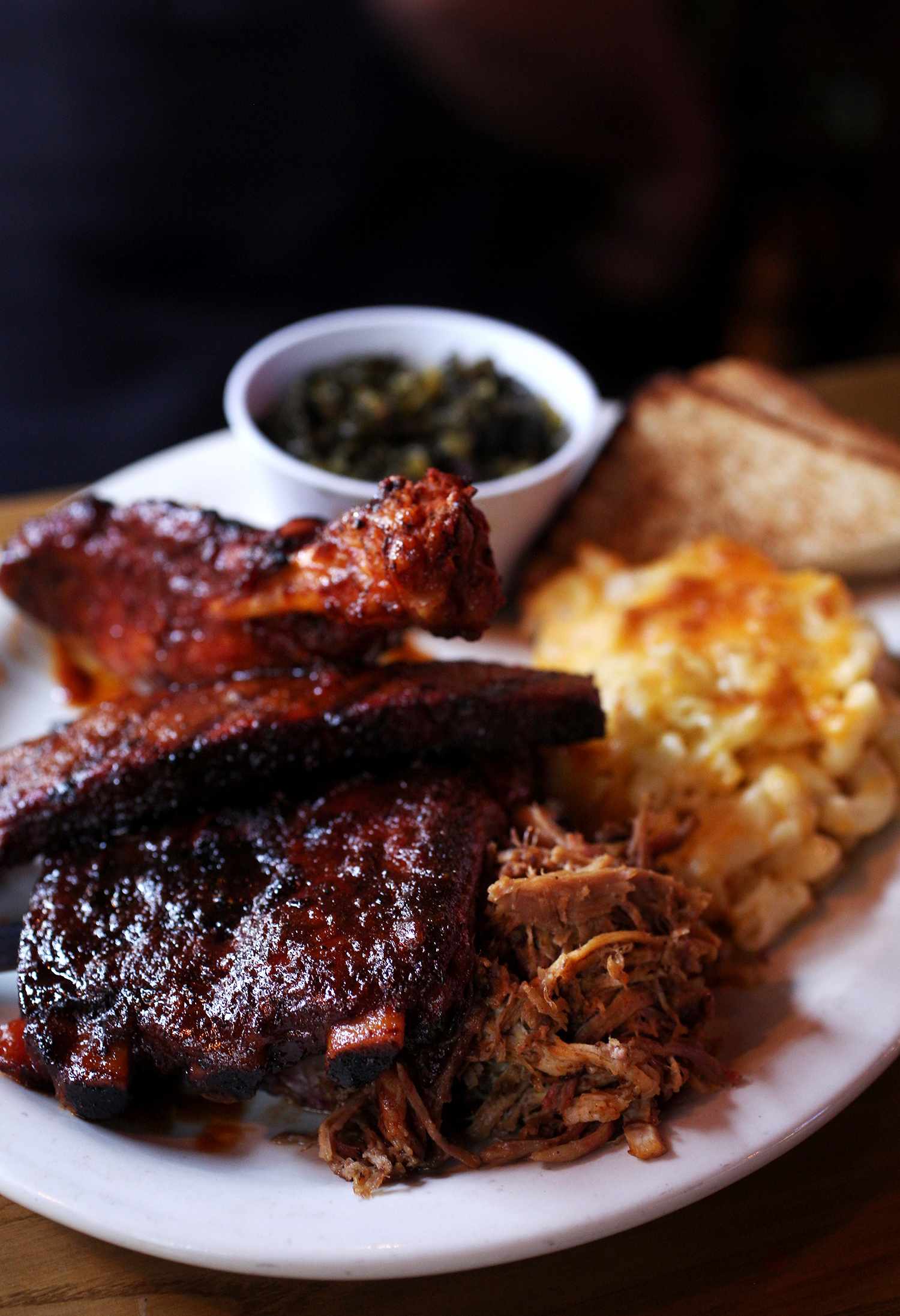 One combo platter at Mac’s can come with a lot of meat, including a “Hog Wing,” St. Louis ribs, pulled pork, and Carolina brisket. photograph by Travis Dove

The sauce, of course, is the elevator that takes Mac’s barbecue to the penthouse. It’s a red sauce with a little honey in it, Kevin tells me, but one suspects that a little something secret is in there, as well: In 2013, Mac’s won the red sauce category at the World BBQ Championship in Memphis — first place out of 245 entries. “The Superbowl of Swine,” David Jewell calls it, and he admits they were surprised and not a little proud that “some guys from the Carolinas” showed an international event that we know something about barbecue sauce.

But Kevin wonders — along with a lot of other North Carolina cooks, apparently — why we would have to go elsewhere and be judged by rules that are not our own. Memphis has its own rules, and Texas does, and so does Kansas City: Why not North Carolina, which has what is inarguably the oldest and best barbecue in the solar system?

To this end, there’s a serious effort, spearheaded by Mac’s, to establish a governing body of our own. It’s called the North Carolina BBQ Association, which will no doubt become known by its mighty abbreviation, NCBBQA. The NCBBQA will serve as a sanctioning body for barbecue competitions. The association’s members, says the boilerplate, “are on a mission to empower all North Carolinians with knowledge and passion for the state’s time-honored tradition of low-and-slow barbecue.” Knowledge, passion, empowerment: It sounds like a self-help book. And though it’s asking a lot of barbecue to cure everything that ails us, low-and-slow sounds like as good a philosophy as any.

A barbecue business model
So, yes, Mac’s Speed Shop is different. It’s the only joint I know with a corporate office, and yet — even though they have five locations and another opening soon in Greensboro — is reluctant to call itself a chain. But there appears to be no end to the towns and cities in this state in need of bikers, barbecue, and beer. Mac’s has positioned itself to take advantage of business opportunities available in the marketplace, and — wait! What kind of barbecue joint thinks like this? Maybe the kind that’s a juggernaut. A barbecue juggernaut: words I never thought I’d write one after the other like that, but then I never thought there existed in this whole wide world a place quite like Mac’s, either.