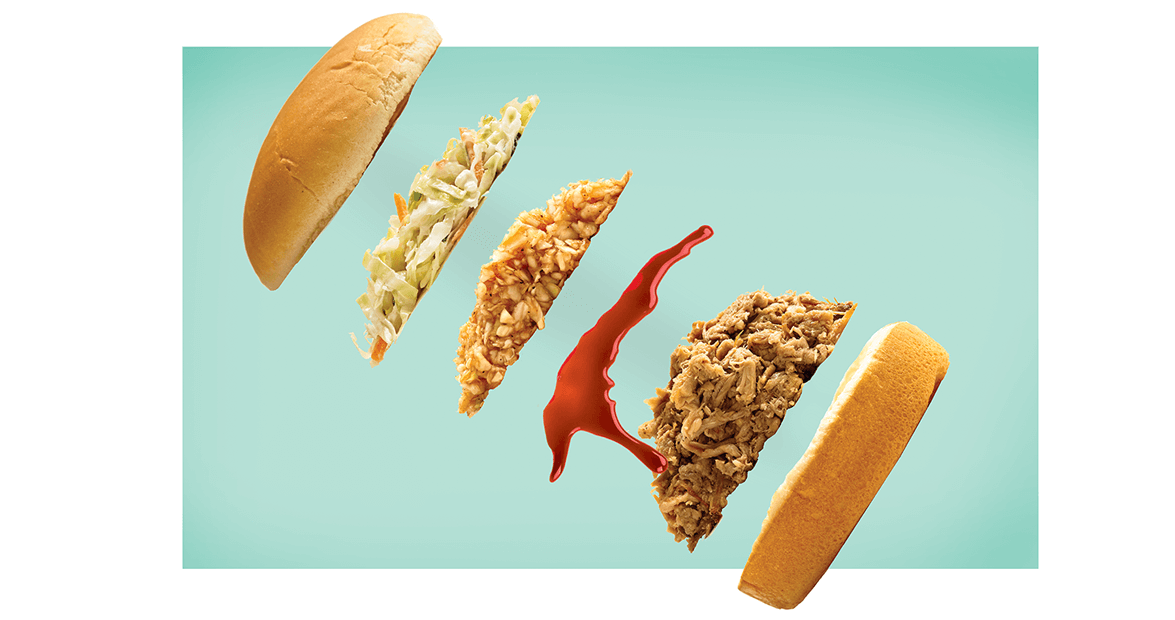 There are two ways of thinking about a barbecue sandwich — or any sandwich, for that matter.

A sandwich is either a thing in and of itself — a contraption that’s both the bread and whatever’s between the bread — or it’s no more than a mechanism for the delivery of the middle, whatever the middle happens to be. The first recorded sandwich — 1 B.C.E. — wasn’t made with bread but with matzo, and the middle was made mostly of nuts and apple. To my mind, though, this wasn’t so much a sandwich as it was sandwiching — a verb that had yet to be invented. It’s important to keep an open mind about sandwiches. But a handful of nuts between a couple of crackers? Please.

I suspect that the first unrecorded sandwich happened about 100,000 years ago on an African savanna somewhere, beside a fire, beneath the stars. Bread had yet to be invented, so something else was used as transport (I’m picturing a couple of big, tough leaves from a plantain), but I’m certain that barbecue was in the middle. Wild boar, most likely. Close your eyes, and you can see it, too: four or five ancestors sitting around a fire after a long day, eating wild boar sandwiches. No red sauce, no vinegar, no slaw — but it was a good start.

A sandwich can be intimate. It’s a relationship, a marriage: two pieces of bread holding between them the heart of the thing. Sandwiches are vehicles for nostalgia. Memories attach themselves to sandwiches like remora to a shark; peanut butter and jelly sandwiches may claim the most. Who among us isn’t yanked back into a childhood kitchen by the aroma of peanut butter warming soft on toasted bread? A peanut butter and jelly sandwich is a time machine. I’ve seen my wife float away on that timeless bouquet.

But barbecue takes up its share of the hippocampus, as well, especially here in North Carolina. “When I think about my perfect barbecue sandwich,” says a friend, “it’s the one I had while I sat, knees touching, beside a (boy)friend behind the smokers at the Asheboro Fall Festival. It’s the one I have at Country Barbeque in Greensboro while I’m watching my sweet mother proclaim it to be the best thing she’s ever eaten.”

The best thing she’s ever eaten. This sort of praise is what a beloved sandwich demands, same as you’d never tell your boyfriend he was the second-best boyfriend you’ve ever had. He has to be the best.

Like a relationship, a sandwich is mysterious. Eating a sandwich is an exercise in trust. We really don’t know what’s between that bun, those pieces of bread: We can only see what’s on the edges. That’s no different than a roll of bills with a hundred on the outside and a lot of ones on the inside. A sandwich can fool you. So much can be hidden in a bun. Like love, you take it on faith. You bring it to your mouth in the hope that what’s inside is what you’ve been told it is.

A friend from Down East tells me that were he to bite into a barbecue sandwich with slaw concealed within it, he would react as if he’d seen a snake on his pillow. Yet another pal, from western North Carolina, insists that a sandwich must be ordered with the red slaw on the sandwich, not on the side, and were it not there when he picked it up, this would undermine his desire in such a way as to be upending.

A perfect sandwich is like a good friend you can have lunch with once or twice a week for the rest of your life.

I don’t believe in open-faced sandwiches. A sandwich is either a sandwich or it is not.

It makes sense that the thing structurally defining a sandwich — the two slices of bread or the bun surrounding the all-important middle — is that thing most often in question, most often disputed, misunderstood, maligned. As crucial as some type of bread is to the fundamental construction of sandwich qua sandwich, it’s often viewed as an impediment to the riches within. I too am food! we can almost hear bread cry out. But bread’s part in the sandwich as actual food appears by consensus to be secondary.

Barbecue is almost always served on a bun, and that’s as it should be: Buns are American and workmanlike. Buns are buns, and they don’t pretend to be anything else. Bread might be focaccia or pumpernickel, but a bun is a bun, period. Buns come in white or wheat, sometimes with sesame seeds, and that’s about it. A friend who has eaten his share of barbecue sandwiches tells me, “The teeth should meet the resistance of the white bun easily, almost as if it isn’t there.” Almost as if it isn’t there. What a radical concept. One could just as easily posit that the best clothes are invisible. “Nothing should seem to come between the barbecue and your teeth.”

Another: “I love barbecue sandwiches (vinegar-based barbecue, of course) with lots of slaw and hot sauce on that kind of soft white bun that sticks to the roof of your mouth.”

Yet another: “A successful barbecue sandwich ought to be primarily barbecue, secondarily barbecue, and tertiarily [sic] sandwich. The bun is less ingredient than it is edible utensil.”

Edible utensil. How sad for a bun. But it’s true.

There is nothing that cannot be made into a sandwich. Leftovers beg to become one. Even soup — chunky, well-aged — can hope to be a sort of sandwich one day. But barbecue seems to have been created to be a sandwich. There is nothing classy about it, though, and there shouldn’t be. Another friend: “My perfect barbecue sandwich is wrapped in paper, always, because anything served on a plate is too fancy and too permanent. A sandwich in paper indicates impermanence — you eat your sandwich, and then you ball up that paper to get rid of the evidence.”

So what is it about a barbecue sandwich that makes it so perfect? What is it about this object the size of a baby Frisbee, its circularity denoting unity, wholeness, infinity? It’s not the bun, and it’s not just the meat inside. And yes, it may be important to have hush puppies on the side (as many people fanatically believe), something to eat between bites, but that’s not it. There’s more, and it may be impossible to understand or explain. It may be that a barbecue sandwich is more than just a sandwich, more than something that is merely deeply loved: Maybe it’s love itself.

An old basketball buddy told me: “When I was a medical resident on call in a hospital on the other side of the country on Christmas Eve, my wife sent me a barbecue sandwich.”

And this from a faraway friend: “When they were young, I’d take my boys for barbecue, and we would sit in the back room where you could see the ovens and pits. They’d eat two sandwiches each and soak the white bread in the extra sauce on their plates. The aroma of barbecue spread for a mile in every direction — still does — and every time I smell it, I think of my boys.”

Or maybe something better. Because love is just a feeling, an idea, an abstraction, a word that tries to put a name to something essentially unnameable. But ladies, gentlefolk: A barbecue sandwich is real. You can see it, smell it, touch it, taste it — and yes, even hear it. I hear it: It’s calling to me now, and I will answer the call. There is no such thing as an unrequited barbecue sandwich.