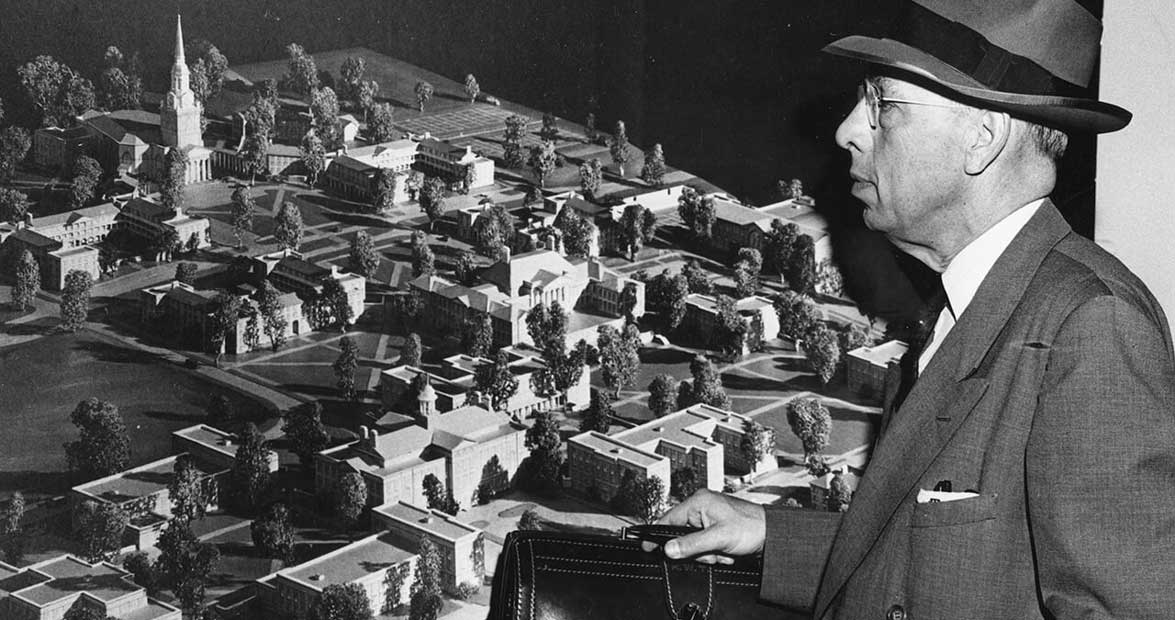 Wake Forest University’s move to Winston-Salem was a relatively smooth one for Provost Emeritus Edwin Wilson, who in the 1950s was a newly minted English professor.

“I was a bachelor at the time, and all I had to do was put my books and my clothes in the car and go,” Wilson says, chuckling.

But as Wilson very well knows, the move to Winston-Salem was a concerted effort decades in the making.

Before it became a university in 1967, Wake Forest was a college, and sure enough, it was located in the bucolic town of Wake Forest.

The town’s charm endures to this day, but during a period of great national transition in the 1930s and ’40s, a lot more than quaint storefronts and quiet streets was required of a community for it to support and sustain such an institution, especially one tight on cash.

World War II had a lot to do with it. An all-male school at the time, Wake Forest College witnessed a significant drop in student enrollment as men left to serve overseas. To alleviate its financial predicament, the college began to admit women in 1942. But other measures needed to be taken: Its law school merged with that of Duke University, and the college leased space to the Army Finance Center to scrape by. 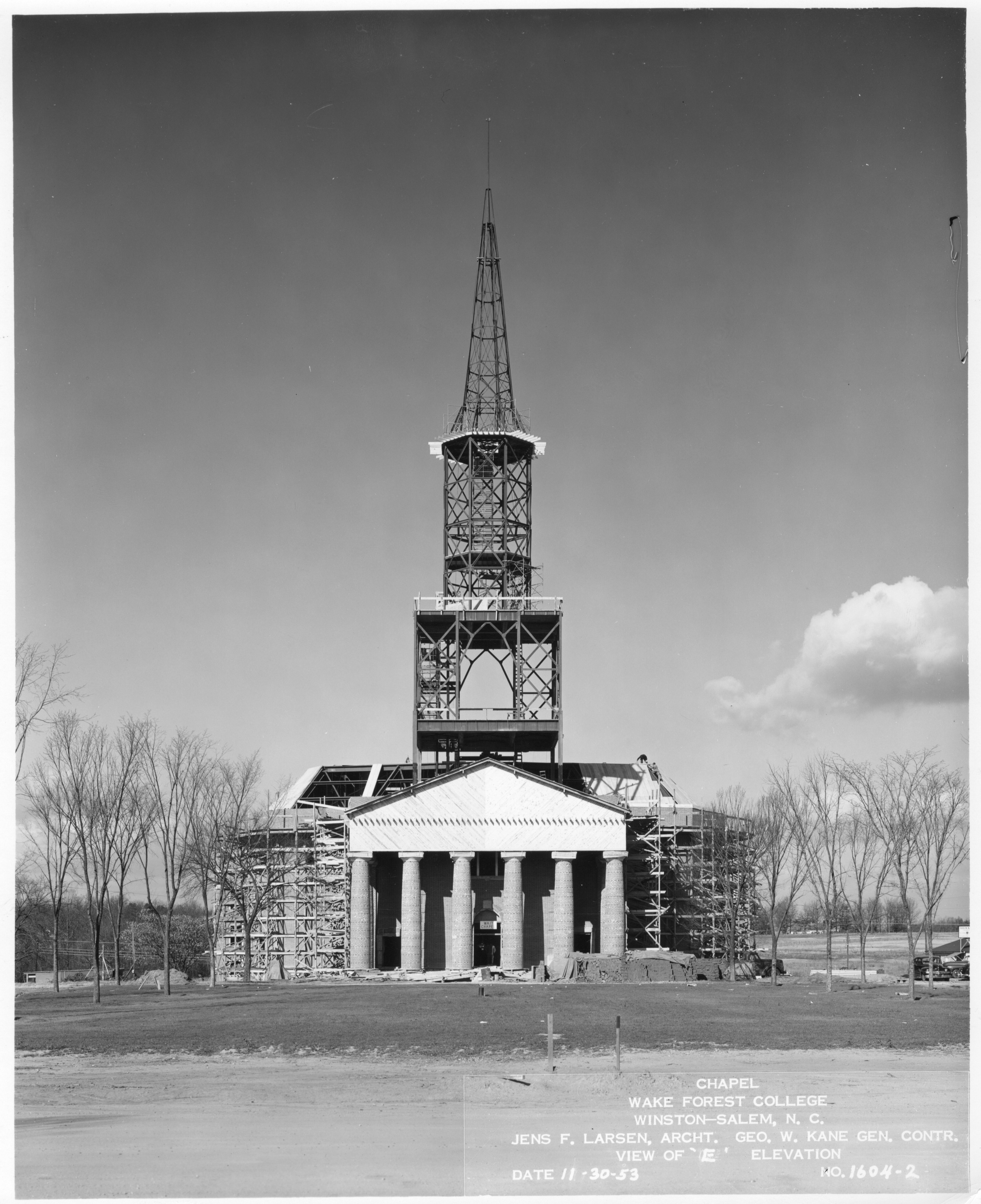 Once veterans returned home, many chose to go to college with the help of GI Bill tuition benefits, causing Wake Forest’s enrollment to spike significantly. The college needed space to grow, but where could it do so with limited money in its capital fund?

Some began to think back to when the college’s medical school moved to Winston-Salem.

In 1935, the American Medical Association outlined new regulations that would require all two-year programs, like the one at Wake Forest, to become four-year programs. As a result, Wake Forest’s medical school aligned itself with a teaching hospital, Winston-Salem’s Baptist Hospital, and its new campus opened in 1941.

It didn’t take long for some of Winston-Salem’s most prominent families to notice the medical school was a boon to the city. Among them was the family of tobacco tycoon R.J. Reynolds.

Gordon Gray, who would later become the UNC-system president, reached out to the family in the hopes of receiving funding from the Z. Smith Reynolds Foundation. The family offered 300 rolling acres and $350,000 a year under the condition that the college relocate to Winston-Salem.

Wilson says those who were familiar with the Winston-Salem area had hoped the medical school and college would eventually reunite.

But the 1951 announcement that the college would soon be relocating brought shock and surprise to some.

“I couldn’t believe that the college I loved was going somewhere else,” Wilson says. “I’m sure that for the people, particularly the faculty who had lived in Old Wake Forest, had built homes there, and raised their families there, it was quite the challenge to anticipate something new.”

Still, when the time came in 1956 to actually relocate, they picked up their belongings and moved westward to help fulfill a vision pushed forward by Harold Tribble, who served as the college’s president from 1950 to 1967.

Wilson says the move was an “extraordinary undertaking,” which Tribble approached with great resolve. 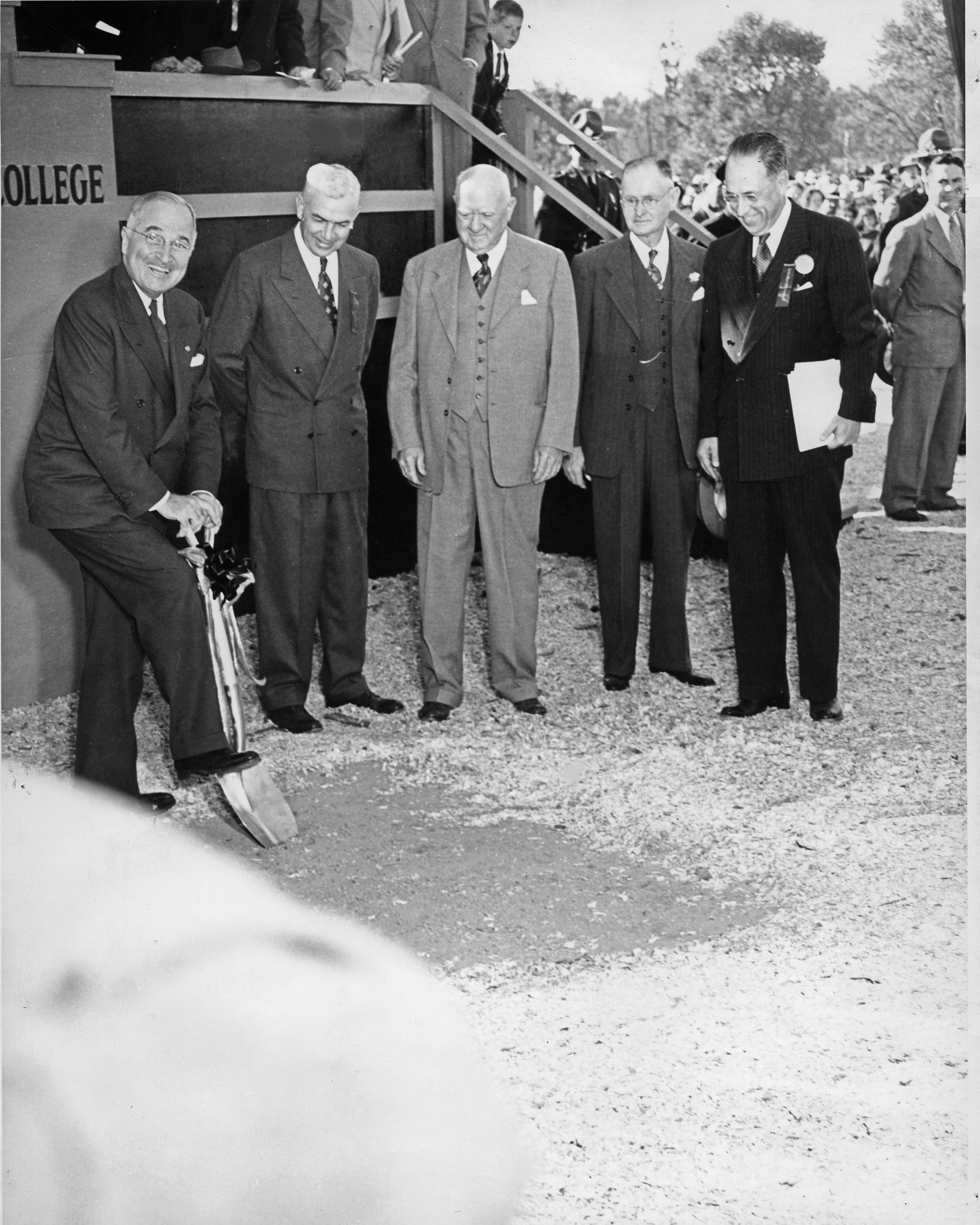 “It would be hard to think of anything in American higher education quite like that,” Wilson says. “He was a determined man who had a kind of almost messianic motive to achieve what he had been employed to achieve.”

Tribble even recruited President Harry Truman to speak at the 1951 groundbreaking ceremony, noting that what the president would say that day would be “quoted around the world as his Wake Forest speech,” emphasizing the magnitude of the relocation.

When Truman spoke that day, a mix of nostalgia and excitement clung to the air as faculty and students gathered on an empty field with no buildings — only dreams of what was to come. Nothing lay before them, yet at the same time, everything did.

Cornerstones for various buildings, from Wait Chapel to Reynolda Hall, were soon laid, and the new campus opened in 1956.

Today, those buildings still stand proud as students learn and professors teach within them, glancing out the window occasionally at the trees, upon which they hang hundreds of white streamers every so often in celebration of sports victories. The class sizes remain small, the community close-knit.

Truly, there’s no greater testament to the everlasting camaraderie Wake Forest has fostered than the willingness of its faculty members and students to pick up their lives and follow the college on its 110-mile journey back in the 1956. Why else would Wilson, affectionately known by some as Mr. Wake Forest, spend nearly six subsequent decades dedicating his life to it?

“Clearly, it is very much a part of the fabric of what I am,” he says. “I think Wake Forest has stood the test of time.”