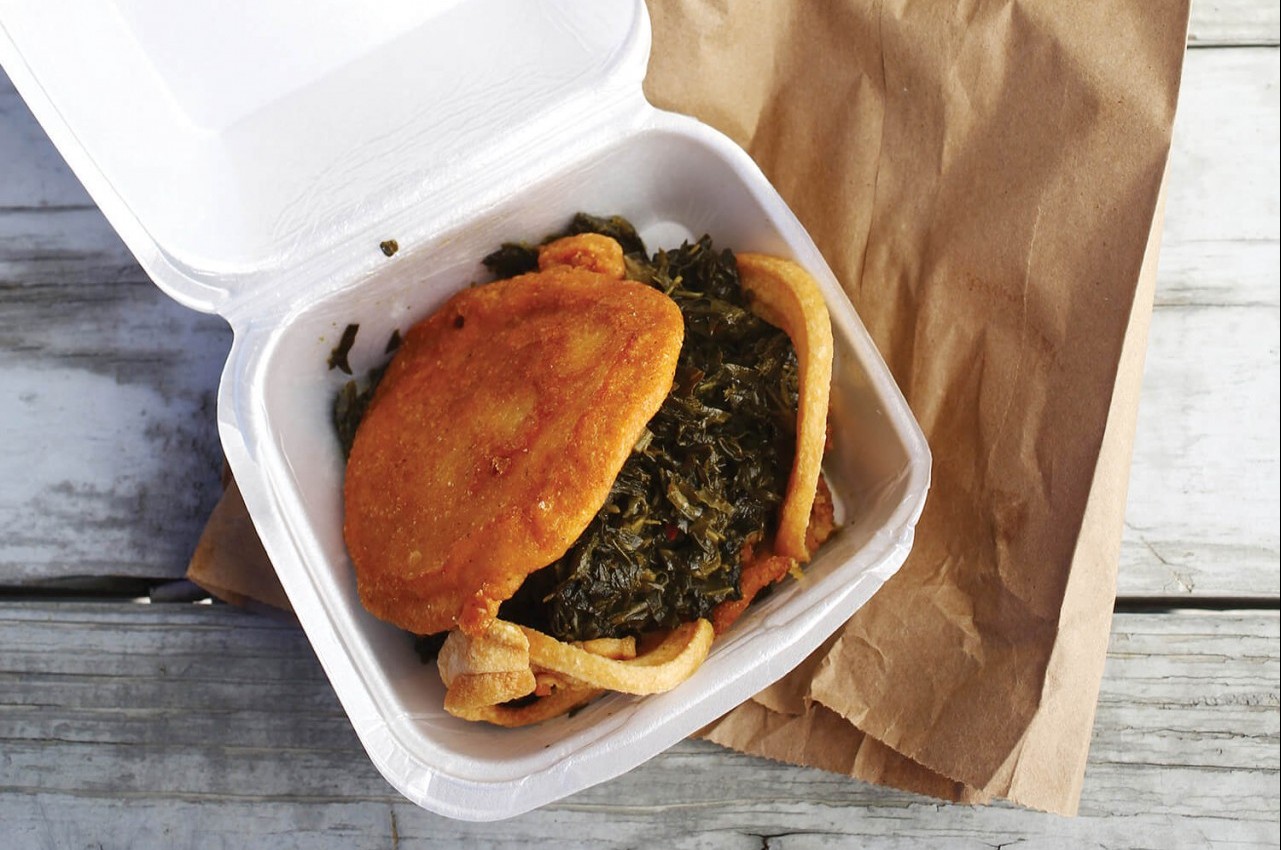 EDITOR’S NOTE: This story was published in March 2015. Since its publication, the Snak Shak in Robeson County has closed.

My husband spotted the blue Chrysler 300 — I’ve never been good with makes and models. It was nearly 10 p.m., the rendezvous scheduled in a Hardee’s parking lot off I-95 in Lumberton. What I knew of Lumberton I knew from what I could see from the interstate — bright lights, the last sign of civilization prior to our good friend Pedro at South of the Border. This was the most convenient place to make the handoff as my family headed from Durham to South Carolina for a last romp on the beach. With two preschoolers asleep in the back, I was wary that the glaring lights from the adjacent gas station might wake them — that, and the noise from a biker gang that had decided now was a good time to refuel. I pulled up beside the sedan and rolled down my window.

Leroy Freeman looked up from his dash, turned his head, and smiled. Keeping my voice low, I got out of the car to receive the goods he’d kindly agreed to proffer, in the dark, by the side of the interstate.

At least that’s what I’d been told. I may have lived in the South for a good portion of my life, but this was a new dish for me. The “bread” is two, thin, round patties of fried cornbread. The filling includes mainly collards, yes, but there’s a strong supporting element in the form of fatback, and maybe some chowchow or vinegar, if that’s your thing.

Freeman — all smiles, even though he’d started slinging fried eats at 6 a.m. — handed over a white plastic bag, neatly tied, and explained how he’d separated everything from one another. The cornbread and fatback were in one container, the collards in another, and he’d put some chowchow in the bottom of a cup that normally holds sweet tea.

The next day, I carefully assembled my collard sandwich to the best of my ability. I was warned it would fall apart, and it did. Freeman said to have a fork nearby. The chowchow was too hot for my palate (nothing new), but I was thrilled by the unabashed amount of fatback, the silkiness of the greens, and the golden brown patties of cornbread. It was nutty, a bit al dente even, and the greens were sweet enough.

It didn’t surprise me when, a few weeks after my rendezvous in the parking lot, Freeman texted me an enticing photo of a collard sandwich, reminding me that the Robeson County Fair started that weekend. “Wish you could come,” he wrote.

In the end, the combination of ingredients made the sandwich greater than the sum of its parts. Those ingredients weren’t limited to things edible.

In thinking about this dish, something so seemingly basic, made with the food of the masses — the cheap cuts of pork; greens that grow just about anywhere, anytime; and corn that’s been preserved for the ages in the form of meal — it might be easy to overlook the deeper notes, those that go beyond flavor.

Consider this. Freeman lives in Fairmont, about 10 miles away from where we met. He agreed to meet me because it was that important I try one of these sandwiches. Freeman was little more than a complete stranger. That he took the time, after a long workweek, to rendezvous at that hour, says something not only about Freeman. It speaks to this sandwich, and the people behind it. Freeman, like 50,000 other folks living in Robeson County, is Lumbee Indian.

This dish isn’t like other Southern dishes — fried chicken, or a Low Country boil. Its identity is just beginning to breach Robeson County lines, the ancestral homeland of the Lumbee Indian tribe. Considered a Lumbee Indian dish, with traditionally prepared Lumbee cornbread and Lumbee collards, its ingredients tell a story. 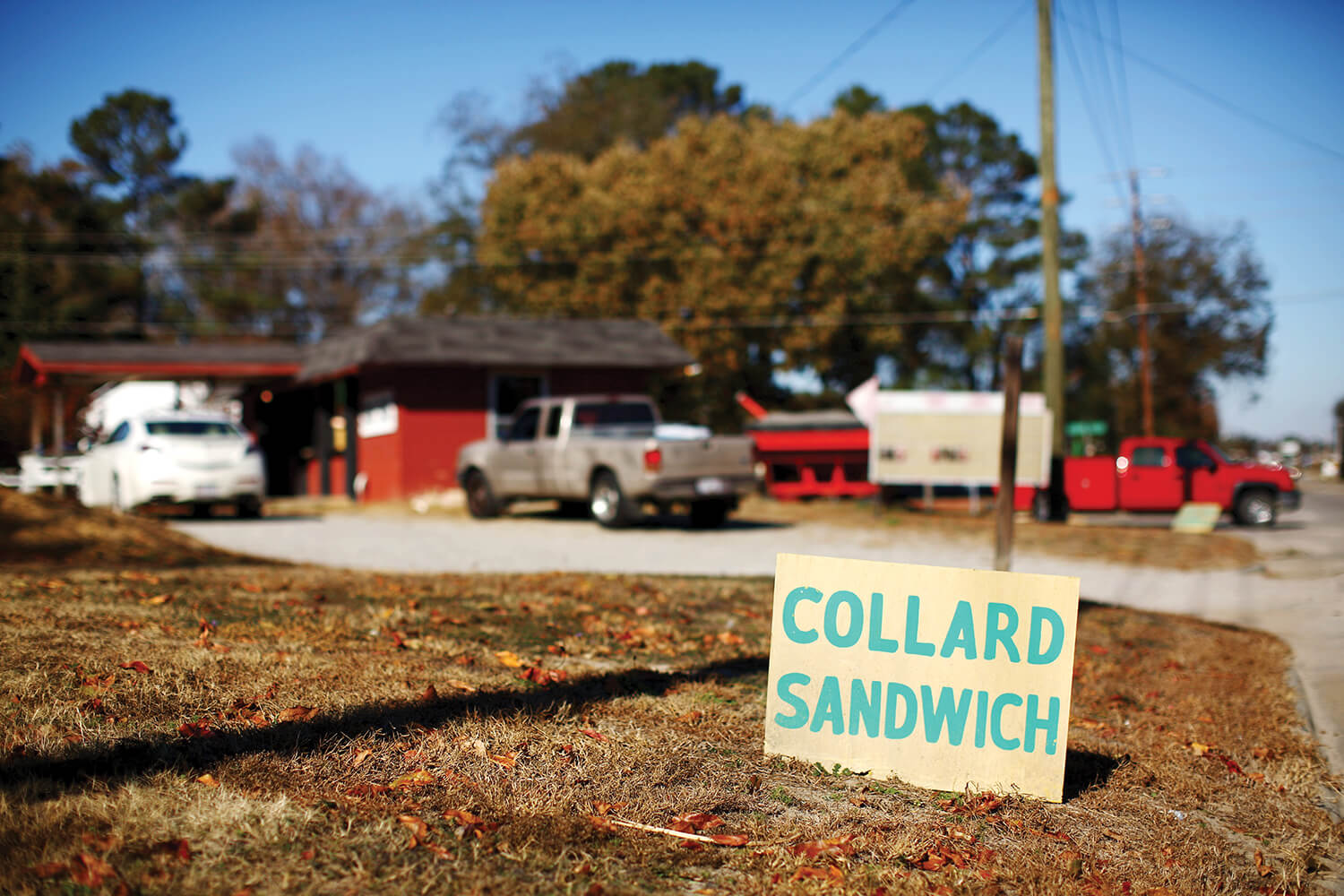 “Most older Lumbee people feel they can literally not eat collards without cornbread. You can eat cornbread without collards, but not collards without cornbread. There’s this natural pairing that’s kind of always been around for wintertime,” says Malinda Maynor Lowery. As a Lumbee Indian, she knows this as fact. As associate professor of history at the University of North Carolina at Chapel Hill and director of the Southern Oral History Program, it’s also her job to talk about such things, for when it comes to history, few subjects summon memory like those of taste and smell.

For Lumbees, the basic ingredients of corn, collards, and pork have been staples as far back as anyone can remember. Though most people prefer winter collards sweetened by the frost, the greens grow year-round and it’s not unheard of for folks to eat collards just about every day. (Lumbees have long been foodies: Some go so far as to freeze the summer greens to do what nature could not.)

“Corn is an indigenous American food. It wasn’t grown anywhere else in the world before Columbus arrived,” Lowery continues. “Indians can make corn grow lots of places nobody else can. It’s a staple of our diets, and it’s become a staple of our culture because it’s been with us for such a very long time.”

The collard sandwich tells of a people who, until not long ago, often ate their collards by scooping them up by hand, forgoing a fork for a hunk of fried cornbread. Though these ingredients are hardly nouveau in the Lumbee community, their “official” iteration in a sandwich is relatively recent. Sure, many a household likely threw together leftover collards on some cornbread, or perhaps wrapped them up with some fatback to take to the fields or the factory, but it’s only been about 10 years since this combination has been sold commercially.

It’s not often that an ancient people welcomes a new dish into the fold of traditional meals. But the Lumbees have never been all that interested in defining themselves by others’ expectations, instead focusing on the deeper elements by which they define themselves.

“What matters to us is, do you know who your people are? Do you know where they’re from? Can you appreciate and talk about their traditions?” Lowery asks. She certainly can, and does.

Like any dish that takes on a life of its own, there’s a technical side to this sandwich. It might be simple, but it would be very easy to screw it up, not unlike the way the French feel about an omelet.

Lowery nails it: “You’ve just got crunchy, melty, salty on top of the slightly sweet and still bitter collards, with the really important texture of the fried cornbread, which, if it’s made well, is very crispy and light around the edges and just sort of cooked in the middle but not dry.”

This is what people look for now at powwows, particularly at homecoming in July, a Lumbee reunion of sorts. Signs for collard sandwiches appear along the road in the weeks leading up to a tribal gathering, and in the Lumbee community, it’s Glenn and Dorsey Hunt who seem to have captured the recipe best. They say they weren’t aware of anyone else selling this sandwich before they began about nine years ago. The couple, a retired carpenter and a retired teacher’s assistant in Robeson County Public Schools, first began peddling food via an ice cream truck. Already known for their grape ice cream, when the Hunts added collard sandwiches, the lines at the powwows grew longer. They have their children post on Facebook where “The Collard People” will set up only a handful of times a year.

The Hunts cook everything on-site, which means that some days the couple cooks as many as 500 gallons of collards in one day.

“They don’t taste the same if you cook ’em ahead,” Glenn Hunt says. “We’ve got one more ingredient we put in our collards: love.”

Some customers make the trip from as far away as Florida.

“It’s a good feeling to me. It’s great. We try to be a friend to everyone,” Glenn says. “It’s about to be a Lumbee tradition, darlin’.”

The Southern Foodways Alliance is now issuing “collard sandwich alerts” when a Lumbee gathering is on the horizon.