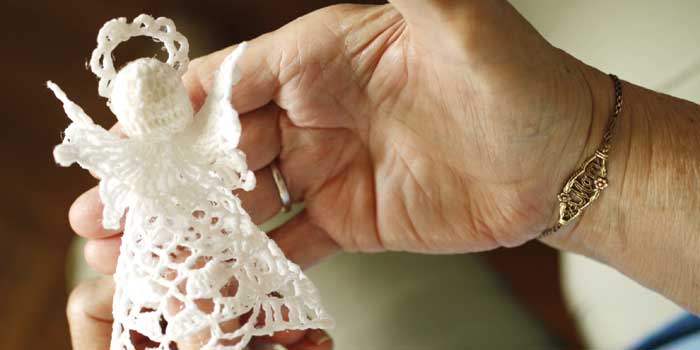 Angels gather on the kitchen island in Edith Lockhart’s Beaufort home. They jostle for space, spill out onto the kitchen table and nearby countertops; they take up residence on the windowsill overlooking her front yard.

“I’ve got more angels somewhere,” she says, looking around her small but cheery kitchen. “They’re in with other Christmas decorations. I’ve just got so many, I didn’t know which box to look in.”

Lockhart’s handmade angels are a wonder. She drew each one out of a ball of yarn with crochet hooks less than one-sixteenth of an inch round, varying her pattern and size, making the two dozen angels on display — and who knows how many more packed away in her home and in others — truly individual.

Tall ones big enough to serve as Christmas-tree toppers and short ones better suited for the mantel or placed in the boughs. They’re bright, brilliant white. Some wear skirts made from lace found on old wedding dresses, funeral flowers, or curtains. Others are crocheted halo to foot. All have round heads stuffed with cotton and crowned with a halo the size of a quarter. Every head seems raised, as if Edith crocheted a choir of cherubim and they can’t stop singing.

Their gowns look soft, like doilies made to stand. But pick one up, and it’s stiff with glue or white gesso. Your fingers read it like Braille, as if somewhere in its weavings and undulations, Lockhart hid a story from her own heart.

In a way, it’s fitting, the Braille-like pattern of her crocheting. Lockhart, 77, lost a good deal of vision in her right eye not long ago. Only the brightest colors and starkest contrasts remain visible on that side. Her left eye slowly follows suit. When she looks around the room, she sees a world in shadow.

But her failing eyes haven’t stopped her from making angels; they’ve just slowed her down a little. And they haven’t kept her from baking or sewing or sitting at the organ in her living room to play and sing hymns. She doesn’t get down about her sight or anything else that comes her way. She finds comfort in creating.

‘I know my children’

Lockhart first sold her angels at a church bazaar 30 years ago. Since then, she’s sold out at every craft fair and market she’s attended. She’s sold them individually to folks looking for handmade Christmas ornaments and 100 at a time to dealers who resold her angels in craft stores and shops from Virginia to South Carolina.

Several years ago, she and a friend were in Charleston, South Carolina, when Lockhart spotted her angels hanging on a tree in the window of a store. She went in to talk to the shopkeeper and told him that she made every one of the angels on his tree.

The shop’s owner didn’t believe her, but Lockhart convinced him when she named the man to whom she sold six or seven dozen angels a few months before — the same man who sold them to the shopkeeper.

He asked Lockhart how she knew they were hers.

Lockhart remembers the tiny mistakes she makes in each one.

“I know where I missed a loop and where I doubled up,” she says. “I know where to find the imperfections in each one, but I choose to overlook them for the beauty within.”

A scrap of lace from Lockhart’s friend Ashley Sullivan inspired her first angel. Sullivan’s husband had just lost his grandmother, and the couple wanted a way to remember her. So they gave Lockhart a scrap of lace from the grandmother’s wedding dress. Lockhart crocheted a body, wings, a head, and a halo and attached them to the lace. Just like that, an angel. Just like that, a piece of family immortalized in cotton and glue.

Over the years, her deft work created lasting memories and helped mend many hearts, including her own.

When her daddy, Bill Willis, died in 1987, Lockhart was lost. The man who raised her and loved her, the man who inspired much of her artistic talent, was gone. At his memorial service, one spray of flowers contained a lace ribbon. Lockhart turned that lace into 24 angels for family members, working her grief and love for her daddy into each one.

When she lost her mother in 1997, then both of her brothers within four days of one another 10 years later, Lockhart found it hard to work through her grief, even on her angels. But she also drew comfort from creating, and each time, she slowly returned to her art.

The most devastating loss for Lockhart and her family came in 2003 when her daughter, Rebecca, lost a short but fierce battle with leukemia. Rebecca was 38.

“It’s so hard to lose one of your children,” she says. “Becky was a sweetheart, and I miss her every day. After her, it was right hard to get started again.”

But the angels called to her, and Lockhart discovered that her grief lessened with each twirl of her crochet hooks. She found her calm center within the even, clicking rhythm; she found peace within the act of making something beautiful from something plain.

Inspired by Mom and Dad

“When I was little, Daddy baked,” Lockhart remembers. “He made a jelly cake for Christmas one time, and he drew Santa Claus on it, and I thought, ‘I can do that.’”

Too young to bake on her own, she began to help in the kitchen, mixing, icing, and decorating cakes beside her parents. As a teenager, she provided the baked goods at family functions and started selling cakes to friends.

But baking wasn’t Lockhart’s only outlet. She watched her father sew a tent at their pedal-powered Singer, and she learned to sew, making dolls, clothes for herself, and even a few wedding dresses. In the early 1980s, she learned to quilt and made dozens that she sold in craft stores and gave to family and friends.

Lockhart says she inherited all of her artistic talent from her father, but she attributes the crocheted angels to her mother.

“I started crocheting because, well, you don’t always have a cake to bake and I needed something to do with my hands,” she says. “Mother had a bedspread she’d crocheted by lamplight when she was young, and I always admired it. For years, I thought about that bedspread, and finally I decided to learn to crochet.”

She bought a book and began to work balls of yarn into doilies and lace of growing complexity, once even adding her own lace to a wedding dress she designed. She made a tablecloth with 65 pineapples crocheted into the pattern around the hem.

Today the tablecloth stretches over the table in her dining room, the pattern spiraling out from the center like the most delicate snowflake.

Lace Angels
For more information about Edith Lockhart’s lace angels, or to purchase her work, contact her at (252) 728-2712.