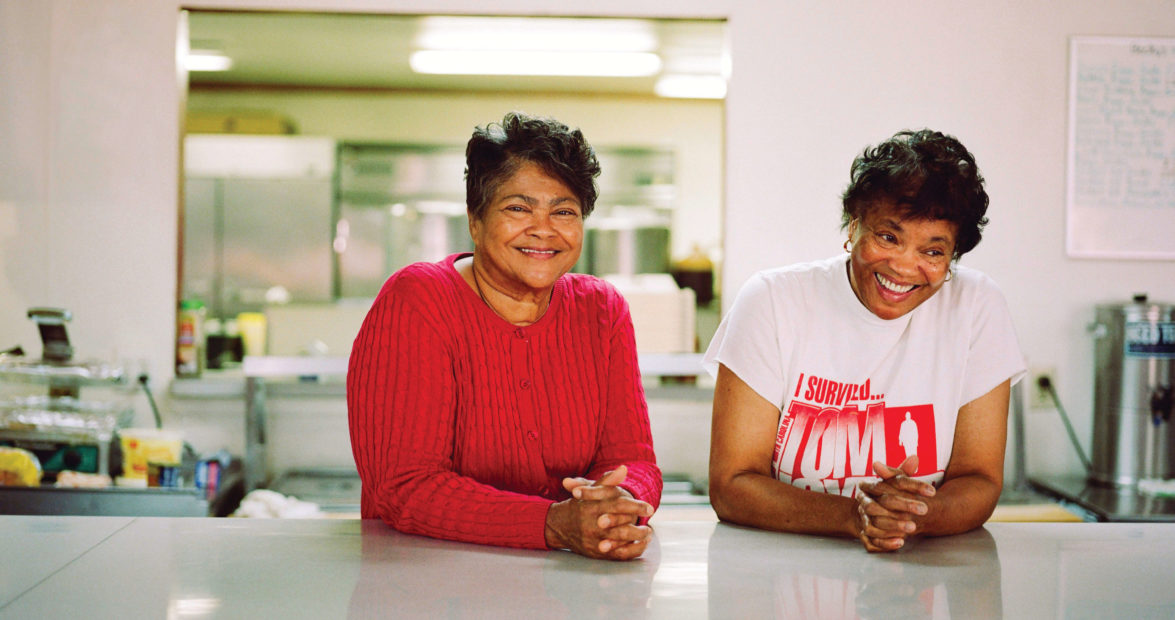 I easily spot Brother Archie’s Barber Shop and Mt. Zion Baptist Church along High Point’s East Washington Drive, a storied place for many in North Carolina. But I’m looking for that hard-to-find place I discovered long ago, that same place homemaking mogul Martha Stewart loves and a 97-year-old man nicknamed Pop comes to every day.
I find it in a slight crook of East Washington beside a gravel parking lot full of cars. It’s a cinder-block building, the one with no big sign out front.

But I know I’m at the right place when I see two small signs in the windows, full of exclamation marks: “Becky’s and Mary’s Soul Food Restaurant!! Best Food In Town! Service With A Smile!!!!”

Inside are 17 tables. There’s no dishwasher, and employees scrub pots and pans by hand. Customers use plastic forks and eat off Styrofoam plates that they throw away after each meal.

Meanwhile, staff members write orders on anything they can find — a paper plate, Post-It notes, and the back of a Styrofoam lid — and they write it in a shorthand that few people can decipher, let alone read.

The decor is more pragmatic than pretty. There’s a wide-screen television and framed posters highlighting memorable moments in sports, such as when the Brooklyn Dodgers played in the World Series and Joe Frazier fought Muhammad Ali.

And among the tables, situated underneath a 16-line declaration about the intersection between God and personal faith hanging on the wall, time stands still.

The food helps. It’s a time capsule to the old South, where people learned recipes at the hips of grandmothers and rarely counted calories on any afternoon, especially Sunday.

The customers help, too. They talk in first names. They congregate around the tables, yammer at the cooks, and start conversations in line at the cash register, even as it grows four, five, six, seven people deep.

But really, time stands still because of Becky and Mary Ingram. The two sisters started Becky’s and Mary’s at this very spot along East Washington Drive in 1973. Since then, they’ve never left.

I find Becky in the very same place where I first discovered her long ago — behind the counter, next to her baby brother, hovering over a grill, with their cousin Daisy Ingram parked by the cash register.

Becky just turned 70. She’s the matriarch of the large Ingram family. When I see her, she smiles. I ask her about her cooking, and when I do, she holds out her hands and grabs mine. She grabs them hard and shakes them like a preacher after a Sunday service. She’s got some kind of grip.

“You got to do it with love,” she tells me about her cooking. “You put God first. Then your family. And you cook food with love, and if you do, you know it’ll be good. It’s all in the hands.”

There was a time when East Washington Drive was the Harlem of High Point. It was a community unto itself with restaurants and law offices, hotels and schools, churches and movie theaters. It prospered in the segregated South.

Jazz legend John Coltrane grew up a few blocks down and around the corner on Underhill Street, and performers, such as singer Ella Fitzgerald, are rumored to have stayed up the street in the nearby Kilby Hotel.

Meanwhile, the black families of High Point planted roots. They raised kids, went to church, graduated from William Penn High School, and worked in the nearby furniture factories.

They created a life around these storied blocks of East Washington Drive.

Today, East Washington is a shell of what it was. William Penn High, Coltrane’s alma mater, is now Penn-Griffin School for the Arts. But a block away, storefronts stand abandoned, and the Kilby is no more.

But along that street, where business feels forgotten, Becky’s and Mary’s Restaurant thrives.
“It’s the backbone here,” Bryan Springs says while waiting to pick up a dinner of chitlins for his mother. “This is like The Last of the Mohicans.”

There’s the handwritten menu on the wall and the aroma of candied yams and the sound of frying bacon that remind me why food and fellowship bind us like glue in the South. Salmon and eggs for breakfast. Fried chicken for lunch. Meatloaf or chitlins for dinner, with potato salad, green beans, cornbread, and iced tea flavored with a splash of lemonade.

And behind the counter, standing over a grill, is Dennis Ingram, the youngest brother of Becky and Mary. He’s 50. In 1985, he started cooking part-time on the weekends. In 1995, after working for years building school buses, he came to work full-time with his sisters.

“They give me hell,” he tells me, laughing with his spatula in hand. “But oh, it’s more comfortable.”

“If I pay him,” Daisy shoots back, walking near his shoulder, her glasses perched on her nose. “He has to do it right.’’

“She wants me stuck in this hot corner,” Dennis responds, waving his spatula like a band conductor’s baton toward his cousin.

“Alright now,” shouts a customer across the counter. “You’d better watch out with that spatula!”

“OK,” Dennis says, pointing the spatula at the guy giving him grief. “What you want? Turkey sausage?”

‘She’s looking for a job’

Since 1961, customers have been coming to East Washington Drive to eat Becky’s food.

That was the year Becky arrived in High Point. She came from Anson County, the oldest of nine kids, to live with her aunt Lula and uncle June. She wanted to escape her potential future: picking peaches and cotton in the fields near Wadesboro.

Her dad, who worked in a box factory, didn’t want her to go.

So, she came to High Point by bus, with the $50 her maternal grandfather gave her. In less than an hour, she had a job cooking at the L&M Restaurant, a place along East Washington Drive.

“I came walking down Washington Street, saw the L&M, and I saw Mary Tillman,” Becky says today. “Mary’s from Wadesboro, I knew her from back home, and she was working there. So I walked in, and it was like old times.

“She introduced me to her boss man and told him, ‘She’s looking for a job.’”

Once again, she holds out her hands, palms up.

“You see, I was blessed from Day One,” she says. “I didn’t have to worry about nowhere to live, and I didn’t need to worry about money. It was a blessing from God.”

Becky’s boss was black attorney John Langford, a World War II veteran. Langford found out quickly that Becky could cook. She learned from her grandmother Leola Lindsey, standing with her in the kitchen, watching her make chicken and dumplings, chocolate cake, egg custard, and potato pie.

She brought those lessons with her. In 1965, four years after Becky made her way to High Point, her sister Mary left Anson County to be with her. Mary was just a teenager, and she enrolled at William Penn. Meanwhile, she worked at the L&M. Just like her sister.

By 1973, both Becky and Mary wanted to be their own bosses. So, they opened Becky’s and Mary’s Restaurant two blocks down on East Washington Drive. They’ve been there ever since.

In 1995, a fire in the deep fryer shut down the restaurant. But two years later, Becky and Mary reopened and doubled the size of the place — from 30 seats to 60.

I ask Becky about the fire, and she pulls out a photo album two inches thick from a shelf in the kitchen. She points to pictures of her family, including her grandmother Leola, before finding the photos from the grand opening.

“I had to get up and make a speech, and I was just shy,” she says, laughing. “I could hardly talk. All I could say was how blessed I was. But all these, these pictures, bring back memories. Good memories.

But mostly, you’ll find the not-so-famous. Customers such as Bryan Springs, the 50-year-old son whose mother loves chitlins. He grew up around the corner from Becky’s and Mary’s.

“I remember coming in here with no money, and I’d get something to eat,” he says. “I’d get a bologna sandwich to knock the wrinkles off, and I’d wipe the tables and sweep the floors to pay for it. This was it. And this is still it.”

Pop has always been here, too. He’s Hosey Lindsay, a 97-year-old who still drives to Becky’s and Mary’s in his Chevrolet. He eats breakfast and sits for a few hours at the same place — near the cash register, the third table from the back wall.

“He likes sausage and bacon,” Daisy says, standing beside Lindsay, her hand on his shoulder. “I see him park just outside, and by the time he comes in, I say, ‘Hey, Pop! Come on in!’ He comes every day at 7 in the morning, and God knows, if he’s not here, we go check on him.”

So many stories, so many customers. Take Bennie Clinton. I catch him on his way to a family reunion when he stops by to pick up two gallons of potato salad. Last time, he only bought one gallon. He knows he needs more so his relatives won’t say, “That’s all you got?”

Or Calvin Carter. He’s a High Point cop. Like me, sort of, he discovered Becky’s and Mary’s when he walked the streets 15 years ago while on patrol. On this particular Sunday, he’s hungry, and he needs to eat before he gets back to work. So he comes for the fried chicken, greens, and macaroni and cheese because it reminds him, as he says, of Sunday dinner at Grandma’s, surrounded by good food and good people.

And nearby, at the counter, is Bob Brown. He’s one of the famous people of High Point, an alum of William Penn High, class of 1954.

He tells me he brings college presidents, movie stars, and big-time businesspeople to eat food prepared by Becky and Mary. But on this particular Sunday afternoon, dressed in his dark suit, he just brings himself.

He stands by the counter, talking to the many people he knows on a Sunday afternoon after church. That includes Becky.

“My brother in Christ,’’ she says. “You want something to drink?”

Make it at Home

Wash and slice the strawberries. Drain them off and sprinkle a little sugar over the strawberries and let them sit in the refrigerator for 30 minutes. Mix the condensed milk, the pudding mix, the can of water from the condensed milk can and let chill in the freezer for no more than 30 minutes. Afterward, mix in Cool Whip. If too thick, add cold water. Lay the mix in the bottom of the container or bowl. Then, begin to layer. First, with cookies, then strawberries, followed by cookies again. Top it with the remainder of the mix. Sit in the refrigerator until you’re ready to eat.