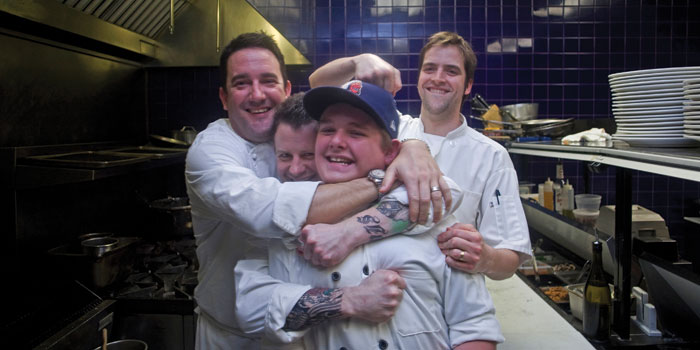 Working behind a large window, Ben Braxton pulls out his kitchen knife and starts mincing parsley with astounding speed. Diners entering Pazzo’s double doors might worry at the sight of a boy with such a big knife. But Ben, wearing a baseball cap with his chef’s whites, is clearly in control. Curious patrons, both young and old, grab a stool and sidle up to the chef’s counter to watch him work.

“Kids tap on the window like I’m a goldfish and ask me how old I am,” Ben says.

Fourteen, he tells them.

When Ben started helping out in the kitchen at the Chapel Hill restaurant and pizzeria, he was young enough to order off the kids’ menu. But even at 12, he had a taste for finer things. Not satisfied with mere macaroni and cheese, he pined for the likes of penne alla vodka. So Ben’s mom asked her friend, Chef Seth Kingsbury, if her son could hang around the kitchen of his restaurant. Ben was too young to work for pay, but he didn’t mind as long as he could learn from a bona fide chef. Since the beginning, Ben has loved it.

One of the guys

“When he first started, he was like a little kitchen pet,” Kingsbury says. “But once he was here for a while, he got treated like one of the guys.”

Kingsbury was impressed when Ben asked his mom for a chef’s knife for Christmas, but he knew that Ben was truly dedicated when he saved his money to complete the set. He carries the knives into work in a businesslike black case. Now, at 14, Ben is an official employee at Pazzo. He prepares salads, whips up bruschetta, and arranges platters of antipasti. At the bottom of the dinner menu, just below the roast duck breast over sautéed local Savoy cabbage, he’s listed in the kitchen credits as Ben “Little Chef” Braxton.

But now that it’s a paying gig, he’s expected to do the less-glamorous work that he was once excused from. In the beginning, Kingsbury saw him as a little kid who just wanted to have fun. But becoming a real member of the team means doing his fair share of the grunt work, too. Kingsbury tells him: “All right, man, we all started in the dish pit, so get back there and start washing pots and pans.”

Ben prefers it that way. “They don’t baby me,” he says.

Kingsbury tries to treat Ben just like all the other cooks, but he acknowledges the challenges. “He’s working in a kitchen full of grown men, which is hard when you’re 13 or 14 years old.” Despite Kingsbury’s request that everyone in the kitchen keep it clean when Ben is working, the occasional slip is inevitable. He reminds his youngest cook: “The kitchen is like Vegas — what you hear in here stays in here.”

Ben acknowledges that his gig requires some social sacrifice. “It’s cool to work here, but everyone wants to hang out on Saturdays when I’m here,” he says. The sacrifice is diminished by the fact that he has fans. Some Pazzo customers consider it a bonus to dine when Little Chef is on duty. Rick and Karen Suberman are former restaurateurs and regulars at Pazzo. “I have never seen a kid that is so intense when he is working,” Karen says. “It’s just wonderful to watch him. It’s all about perfection for him.”

Ben’s behavior when he’s in the dining room impresses Rick. “I noticed that he orders like an adult, with a sophistication well beyond his years,” he says. “When my kids were 14, all they wanted was fast food.”

Steve Robinson, an assistant basketball coach for the University of North Carolina at Chapel Hill, dines at Pazzo several times a week. When asked how long he’s been eating here, he laughs and replies, “How long has it been open?” Robinson remembers when Ben first started. “Little Chef was always attached to Seth’s left hip, watching and learning,” he says. When Ben learned enough to handle tasks on his own, Robinson was amazed at how meticulous he was. “You can see the concentration on his face,” Robinson says. “Every little detail has to be just so. You just don’t see that out of many youngsters.”

Ben is not allowed to cook hot food for customers unless they’re family members, but he’s building his repertoire by learning how to make all the dishes on the menu. Sometimes his dad comes for dinner, or his older brother brings a date to the restaurant. That’s when he shows off his favorite skills, such as flaming pans with vodka. When things are slow in the kitchen, Kingsbury takes the time to teach Ben important techniques, taking care that he doesn’t instill any bad habits in his protégé. “He’s learning that there’s only one right way to sear a piece of fish, one right way to mark a steak, and one right way to make a vinaigrette,” Kingsbury says. “He’s learning things that were pounded into me over decades by the chefs I worked for.”

Kingsbury presides over the kitchen with a cheerful discipline. He asks Ben, “What are the two most important words in this kitchen?”

At first, Ben’s mother, Beth Braxton, was nervous about her son being in the kitchen at such a young age, but she knew that Kingsbury would keep a close eye on him. And she’s been there when the chef has yelled at Ben for messing up. “I told him that I didn’t like to see him get in trouble,” she says, “and he said ‘Mom, you can’t learn if you don’t make mistakes.’”

Kingsbury’s discipline extends beyond the kitchen. Every quarter, Ben has to show his report card to his boss. “He knows he has to make good grades, or he’s not allowed to work,” Kingsbury says. “School comes first.”

Beth Braxton credits Ben’s success in school to the confidence he’s gained working at Pazzo. He was a below-average student but now makes the A-B honor roll. In third grade, Ben was diagnosed with attention deficit hyperactivity disorder. But since he’s been working at Pazzo, the concentration he’s gained in the kitchen has translated to his schoolwork.

Beth is a single mom, working full-time, but she makes time to help her son follow his dream. “I love watching him work in the kitchen because he’s so intently focused,” she says. “I can see the pride he takes in his work, and that makes me proud of him.” On the nights that Ben works, Beth usually drives him the half-hour to the restaurant, returns home, and then goes back to pick him up at the end of his shift. “I can see how much he is enjoying it,” she says. “And he has really seemed to mature, so that makes all the driving absolutely worth it.”

Kingsbury’s willingness to allow a kid in his kitchen goes back to his own childhood. Growing up in a family of great cooks, Kingsbury was interested in pursuing culinary arts as a career. At age 14, he had already worked in fast-food kitchens but wanted a greater challenge. His dad had a friend who managed a swanky hotel restaurant in south Florida, and he agreed to let Kingsbury work in the kitchen. For two summers in the late ’80s, he did mostly grunt work. “They’d tell me, ‘We need 1,500 potatoes peeled. See you in two days!’” he says. But he also learned techniques that gave him an advantage once he made it to culinary school.

Kingsbury hopes that Ben’s experience in his kitchen will give him a leg up if he decides to pursue a culinary career. When asked what he wants to be when he grows up, Ben replies with a grown-up response: “I’ve put some deep thought into being a chef, but I need something to fall back on.” He plans to attend a four-year college and then consider culinary school.

Whether or not Ben becomes a chef de cuisine, his time in the kitchen has been worthwhile. At 14, he exudes a quiet confidence and self-assuredness. When he dines out with his family, he sometimes asks for the chef, compliments the meal, and then introduces himself as a colleague. He has learned how to focus, gained the respect of his adult coworkers, and become part of a team. And he’s mastered penne alla vodka, well before he can legally consume the key ingredient.