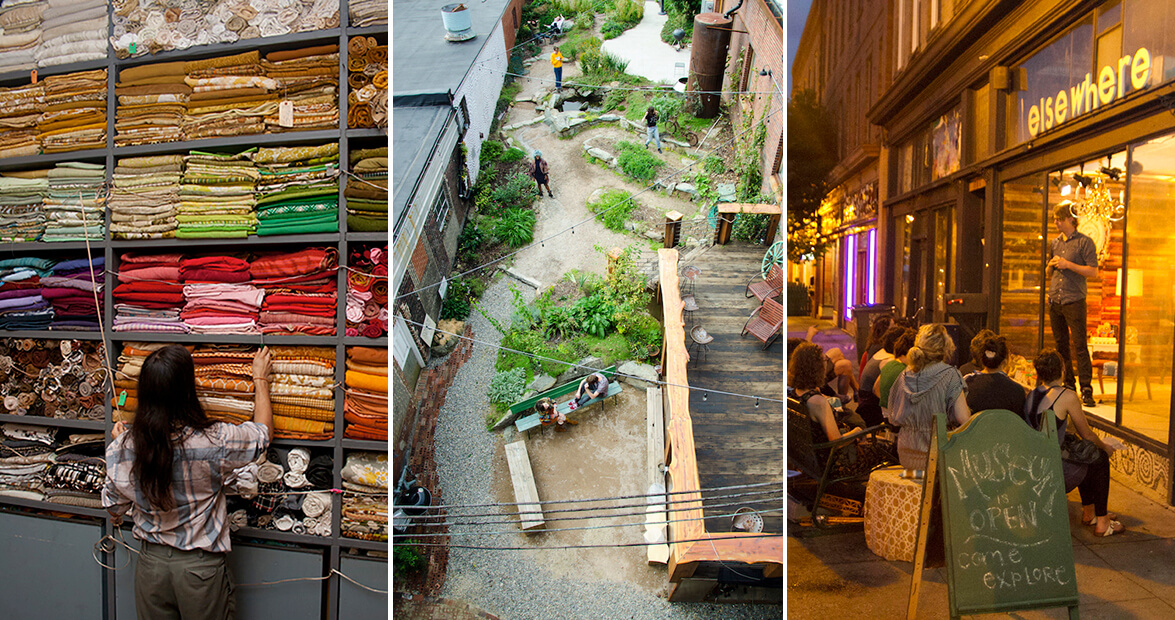 When you step inside Elsewhere on South Elm Street in downtown Greensboro, the first thing you are likely to notice is the overflowing collection of things. Walls and walls of books, endless organized rolls of fabric, and bins of antique toys. Then you’ll see people milling about the space, building, conversing — and cooking. There’s a full kitchen in the first room, and artists living upstairs.

What is this place? Is it a thrift store? A museum? A home?

The answer would be: Yes. In fact, it’s a combination of all of the above. The three-story property was once an army surplus business that Joe and Sylvia Gray opened in 1939. Joe passed away unexpectedly in 1955, leaving the store to Sylvia, where she continued to expand the inventory until 1997. She was the epitome of eccentric and saw value in everything, but making money was not her priority. She would shop twice a day at the local Salvation Army and Goodwill, building an ever-growing collection of objects ranging from upholstery to clothing, buttons to ribbons, furniture to knick-knacks. The space was, essentially, Sylvia’s life in objects.

When Sylvia died in 1997, the store sat untouched until her grandson, George Scheer, rediscovered the space in 2003.

“The store had been locked up for six years, and we decided that nothing would be for sale and nothing would leave,” Scheer says. “Instead, we began a treasure hunt — organizing, arranging, transforming the objects — and eventually began the Elsewhere residency program in 2004. We started inviting artists from all over the world to come in and use the materials to create artworks, and those works become part of this changing, transforming, living museum.” 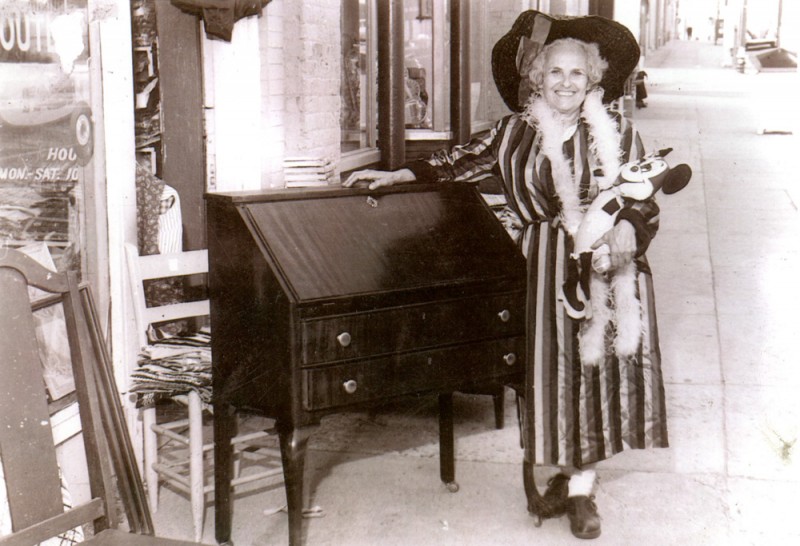 In Elsewhere’s case, the “living museum” concept means that the artists in residency are required to only use the materials that already exist in the space to create exhibits and installations within its walls. Nothing new is brought inside, nothing is removed from the space, and nothing is for sale. Nevertheless, materials are constantly being rearranged, reimagined, and reinvented.

“The idea wasn’t to open another store in downtown Greensboro,” Scheer explains. “We came to transform the way people think and engage with culture. Elsewhere is a store where nothing is for sale, that’s also a museum and a home. It engages artists in collaborative practices, and invites them to come and transform it from within, not starting from a blank slate.”

Elsewhere’s residency program invites artists from near and far, from different mediums, backgrounds, and disciplines, to create projects that make the museum come alive. Residencies are two to four weeks long and bring in four to six artists to work and live together during that time period. In a given year, Elsewhere will host up to 50 different artists.

When Montreal-based artist Anique Vered first heard of Elsewhere and its residencies, she was living in Australia, where she was born. That was nearly a decade ago.

“I reckon I’ve known about Elsewhere for 10 years,” Vered says. “That’s how I knew about Greensboro. I know people from all over the world that have come to Greensboro specifically for Elsewhere. Elsewhere is gaining traction in the wider community, so it got to the point where I thought to myself, I can’t be living in North America and not go and spend some time there.”

Vered is an artist-researcher whose recent work explores alter-economies and “living with difference” — different bodies, minds, propulsions, and needs. She started her Elsewhere artist residency in October 2016, and Greensboro played a large role in her creative process.

“Part of my practice, which is research-focused, deals with the sites and places and communities in which it’s based,” Vered says. “So for that reason, Greensboro as a place has affected my experience here. But there’s such a vibrant community around Elsewhere, and the residency itself is very intensive. You can get pretty caught up in it.”

Fortunately, the Elsewhere model encourages the outside world to come and interact with artists like Vered. The museum is open to the public Thursday through Saturday from 1 p.m. to 10 p.m. Admission is donation-based ($1-5), and visitors are welcome to explore the space and engage with the installations. “When people are walking around, and you start a conversation with someone, you get to connect with the community in different ways,” Vered says.

Ayo Janeen Jackson, another artist in residence, found inspiration in Greensboro because of its ties to the Underground Railroad around Guilford College’s campus. She is working on an extended performance piece titled “Walking with Freedom: The Heritage of the Black Imagination,” where she is retracing Harriet Tubman’s footsteps to freedom. She was also inspired by her fellow artists in residence and the collaborative nature of the program. “It’s a completely different process that I’m definitely going to take into my own practice and bring with me on my next residency,” she says.

But the one thing that surprised Jackson the most about her experience at Elsewhere was the fact that each artist has to cook dinner one night a week.

“I recently made dinner with a girl I met three weeks ago,” Jackson recalls. “We were listening to music, feeling good, learning, and growing together, and it felt completely enriching, and I love that. I love that.”

At first you may feel like you’re in a thrift store, or a museum, or someone’s quirky home. But with a closer look, you realize that Elsewhere is a perfect balance of all three. It’s symbiotic. It’s alive.

Sylvia Gray didn’t live to see the full potential of her legacy. It took her grandson, George Scheer, and his artistic vision to allow her collection to become the emporium of organized creativity that it is today. Scheer hopes that Elsewhere changes the way that people think about and engage with contemporary art.

“Art doesn’t always happen in a gallery or a museum, or by a solo artist in a studio, but art can be a part of a whole living practice,” Scheer says. “That’s the role the artists are playing here. They’re transforming everyday stuff into these reimagined worlds, and you begin to see art in everything.”