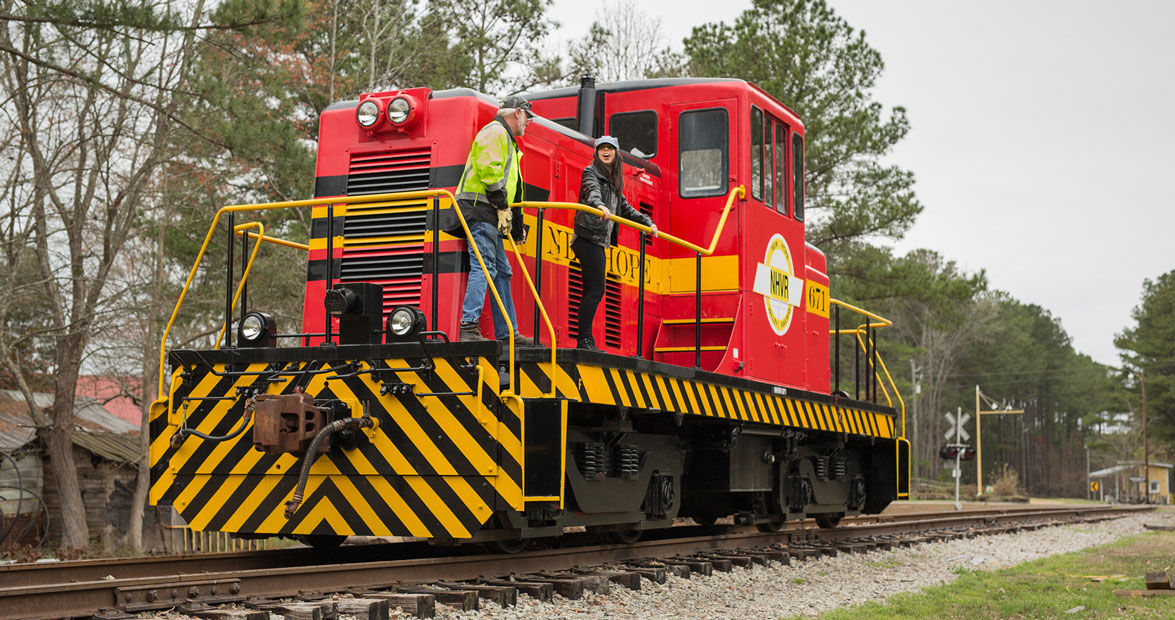 You come to the North Carolina Railway Museum in Bonsal to see the historic railcars, or to live out a childhood fantasy of driving a locomotive. But volunteer chief dispatcher Bob Crowley, with his almost-too-tall-to-be-true tales of the New Hope Valley Railway, is the reason you stay.

He has stories of sleeping engineers, underwater towns, and train crashes — evidence of which you can still see if you know where to look at the American Tobacco Campus in Durham, where the north end of the line once stopped. To hear these stories, you’ll have to show up at his office door (and carve out a couple of hours of your time). But with each anecdote, Crowley brings a hefty dose of zeal to these stories that few people still tell.

It was never Crowley’s intention to become the museum’s walking railway encyclopedia, but early in his involvement with the organization, he saw a need. “I’d asked some of the other volunteers when I joined in 2002, ‘Why was this railroad put here?’ and the immediate reaction was, ‘Tobacco,’” Crowley says. “People think of this as a tobacco railroad because the American Tobacco Company owned a controlling interest.”

But something about that didn’t seem right to Crowley. His love of history and his familiarity with the industries in the region during that time period made him question whether transporting tobacco was really the railroad’s original purpose. So he started digging.

“I found out it had absolutely nothing to do with tobacco at its start,” Crowley says. “They ran tobacco up and down it, too, but this was primarily a lumber railroad, built here in 1904 to collect lumber taken from the New Hope Valley, now Jordan Lake.”

If that aspect of the railroad’s history had been wrong, Crowley wondered, what else don’t we know about it? Some basic facts were well-documented: The New Hope Valley Railway was originally chartered as a 30-mile line from south of Apex to West End (present-day Carrboro). It was rechartered a year later and eventually extended, connecting the Harnett County town of Duncan with the warehouses of the American Tobacco Company in Durham County. The line operated continually through 1980; during its heyday, in the 1910s and ’20s, it ran two trains a day. The railway also offered passenger rail service between 1904 and 1932.

But the stories of the people — the ones who built the railroad, worked the railroad, grew up with the railroad — had been lost, so Crowley set out to retrieve them. Like the equipment, it was finally time for history to be restored.

Today, anyone can trace the former northern rail path from New Hill to Durham by walking the American Tobacco Trail; the southern end is now property of Shearon Harris Nuclear Power Plant. In 1983, the North Carolina Railway Museum, which was then operating in Farmville as the East Carolina chapter of the National Railway Historical Society, purchased its 4.2-mile portion. Once the purchase was finalized, the organization packed up its cars — train cars, that is — and moved to its new, permanent home in the Triangle.

“In its earliest days, this organization was just a bunch of people who liked trains and wanted a railroad,” Crowley says. “They weren’t doing this to eventually create a business. They would just get together, and if someone wanted to run a locomotive, they simply had to bring a can of fuel with them.”

After spending a year repairing and restoring the line, one member had an idea: They had the track, they had the locomotives and railcars — why not invite the public to come along for the ride?

“The members went to all the churches around here and said, ‘Hey, we’re going to run down the New Hope Valley track on Sunday after your services; why don’t you come out?’ And, boy, did they,” Crowley says. “The first couple of times they did it, they didn’t charge anyone — just invited them up on the flatcars, told them to bring lunch. Then, somebody said, ‘You know, if we charged admission …’”

More than three decades later, visitors to the North Carolina Railway Museum can still chug along the line in train cars. After the ride, they can check out the outdoor model train system and learn about the more than 30 restored locomotives and cars in the organization’s collection. True railroad enthusiasts can take the next step and earn their stripes through the museum’s Operate-a-Loco program. Participants don an engineer’s cap and actually drive a locomotive down the track, from Bonsal to New Hill and back.

The museum also hosts special events throughout the year, such as Brew ’n’ Choo, held the last Saturday of the month from April to September. Local breweries and wineries are welcomed to the rail yard, where guests can take a train ride, enjoy music provided by a live DJ, have a drink, and take a walking tour. “It’s a little different compared to the standard dinner and a movie, but for a lot of people, it’s become a date night,” Crowley says.

In the future, Crowley hopes to see the museum grow both its number of visitors and volunteers. Because the North Carolina Railway Museum is 100 percent volunteer-run, the volunteers’ experience is equally as important to the organization as the visitors’ — it’s the volunteers’ collective passion for railroading and its history that keeps the museum running.

Less than 5 percent of the museum’s 190 members have previous railroading experience, but they can still participate in other ways. In fact, Crowley wants volunteers who come from a wide range of backgrounds unrelated to machine operation. “Are you a seamstress? Because I have old uniforms that I want to have patched and remade,” Crowley says. “Do you enjoy china collecting? Because I’ve got railroad china that needs to be curated. We’ve got tons of carpenters, diesel mechanics, painters, all that, but we really need a plumber. Please, send me a plumber!”

For some 200 years, trains have brought people together from different backgrounds and locales, just as the North Carolina Railway Museum does today with its volunteers and visitors. Together, they form the rails that keep the legacy of this railway — and the trains themselves — running at full steam.