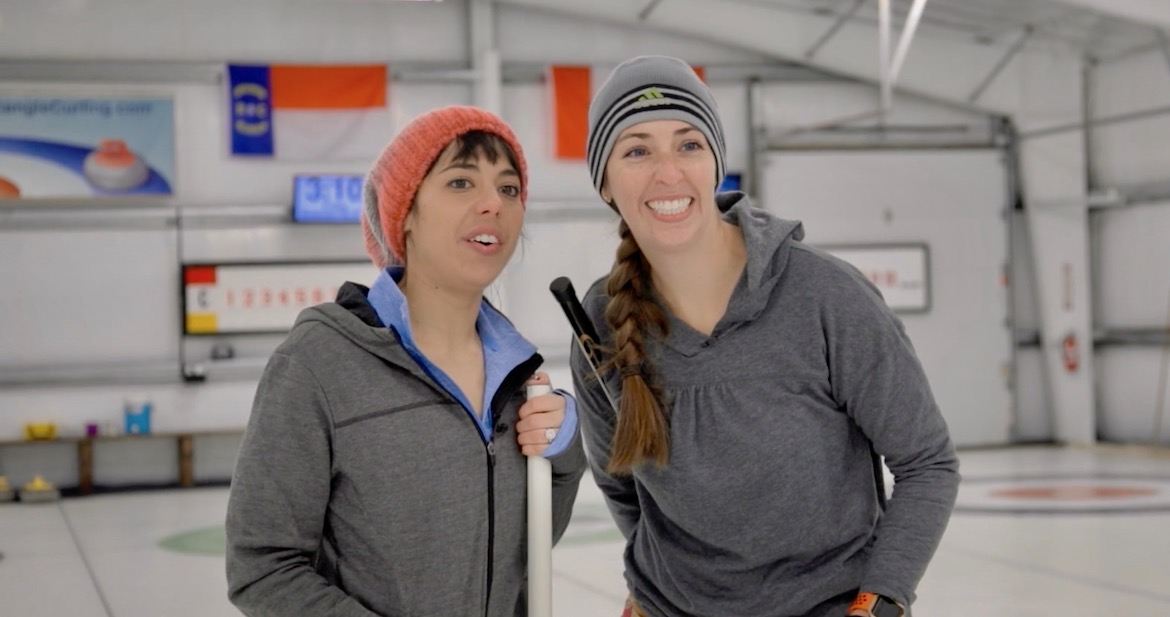 The revelers are throwing rocks at the house. When they finish, they’ll move to broomstacking. Then, the next group of people will start pebbling.

If you have a limited knowledge of curling, you may be confused, and a little concerned, at this point. However, seasoned curlers know all the lingo. “Pebbling the surface” is the process of spraying water on the ice surface to ready it for a match. “Throwing rocks at the house” is launching the granite stones toward the marked target at the end of the lane, or “sheet.” “Broomstacking” is a curling tradition where the winning team buys the losing team a round of beer at the end of a match.

Curling is well-known for its quirky nomenclature, but few know how approachable the sport can be. “The closest [comparable] sport is bar shuffleboard,” says Triangle Curling Club of North Carolina President Andrew Pearson. Except instead of the palm-size discs used in shuffleboard, curling players throw a roughly 40-pound stone down a sheet of ice toward the house. As the stone slides across the ice, teammates use curling brooms to sweep the ice ahead of the stone to help it travel farther and straighter.

Once relegated to the odd hours of cable television for a few days every four years, the recent increased television coverage of Olympic curling has allowed the sport to reach a larger audience across North Carolina. In fact, it’s specifically thanks to the coverage received in the 2006, 2010, and 2014 Winter Games that the Triangle Curling Club has grown to where it is today: more than 240 members and its own building equipped with an ice rink designed specifically for curling.

Tonight, the ice is at full capacity. Thirty-two players, split into teams and divided over four sheets, are in midplay on the first night of the Tuesday Winter League. A mix of people from all life stages, ranging from high school to retirement, compete with players of varying experience levels. Some members drive more than 100 miles to curl, while others live a few minutes away. The diversity of players on the ice tonight reflects a popular recreational curling mentality: Age and physical ability are secondary to good sportsmanship and camaraderie.

Today’s club has come a long way from its humble beginnings in 1995, when two relocated Canadians put an ad in a local newspaper to start a curling league and just 12 people showed up. In the years that followed, membership growth was largely stagnant as the club traveled across the region to play on ice hockey rinks, using Sharpie markers to draw game play lines on the ice. Though the club wasn’t competitive, it was successful in its main mission: to bring the Triangle community together through curling.

“The founders have since moved away, but their legacy lives on in this building,” Pearson says. Though the Triangle Curling Club has undergone many changes over the years, it’s the continued emphasis on community that has allowed the club to thrive.

Club member Kerry Radigan remembers watching Olympic curling on television in 2014, the year she moved to the Triangle. The sport intrigued her enough to find out where she could learn to curl.

“I thought I was going to have to drive hours and hours to be able to even try curling, and it turns out a curling club was just a few minutes away,” Radigan says. Many of the current members share a similar story: After the Olympics, they signed up for an introductory curling lesson and were surprised by how easy it was to fall in love with the sport.

“A lot of people have the expectation that curling is just one of those cool Olympic sports,” she says. “But when they come into the club and experience it for themselves, they’re drawn to how fun the sport is, how small the learning curve is, and how amazing the people are.”

When not on the ice, members can usually be found sharing a couple of laughs and enjoying one another’s company in the lounge. The lounge is designed to be a familiar, inviting space where Triangle transplants can pop the top off a Molson, sink into the couch, and watch curling on a Canadian cable channel.

“Research Triangle Park really brings people in from everywhere,” Pearson says. For Canadians in the Triangle, an afternoon at the club is a comfort when they’re feeling homesick. However, the club pays tribute to its Triangle location, too — the lounge’s bar rotates four drafts from local breweries. Tonight, Fullsteam Brewery, Bull City Ciderworks, Bond Brothers Beer Company, and Ponysaurus Brewing are on tap.

The Winter Olympics are always an exciting time for the curling club, but this year’s games are particularly noteworthy. For the first time, mixed-doubles curling — a two-person, coed variation of the game, which Triangle Curling Club has played for more than two years — is part of the competition. The addition of this event means curling will be one of the only Olympic sports played every day of the Games. As a result, it will receive more exposure, which the club anticipates will lead to increased interest in the sport.

When the 2018 Winter Olympics conclude, the club will pause league play to host various learn-to-curl events every night for the following week. A one-hour “Try Curling” course will be offered on weekday evenings and weekends. “Lunch and Learn” sessions will provide instruction, game play, and a meal. “Pick-up and Pizza” sessions will offer three hours of curling, allowing newcomers and experienced members to play together and enjoy a slice or two.

“People will come onto the ice for learn-to-curl events, curl for a couple of hours, join a league, and fit right in with everybody else,” Radigan says. “The majority of our membership base actually has less than two years of experience.”