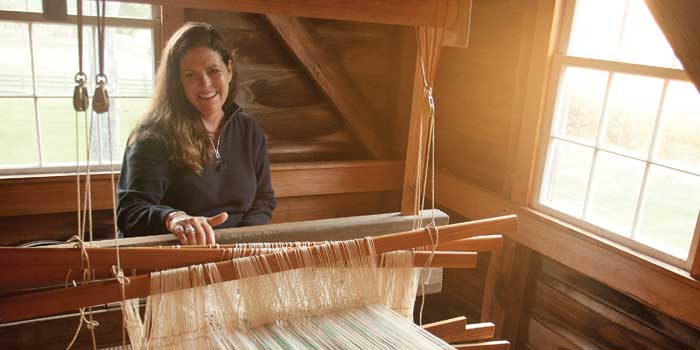 Beth Burns walks into the pasture where her sheep graze on the quiet end of Roanoke Island. Colleen, the leader of the flock, nuzzles up to Burns, leaning the weight of her warm body into Burns’s legs. Burns scratches the sheep between her stubby horns and rubs the dust-coated, cream-colored wool that rolls in dense waves along her body.

Burns’s Rambouillet, Romney, and Corriedale sheep that live along the main road at Island Farm are a favorite sight on Roanoke Island, a public historic site that shows what life was like here in the mid-1800s.

These reminders of the past are also beloved pets named Colleen, Izzie, Collette (LouLou), Betty, Bucky, Iris, and Mamie.

“They provide daily purpose and peace,” says Burns, her easy smile lifting the corners of her eyes. Gentle-natured and a little shy, like her sheep, Burns’s speech is careful, soothing. “They need me. I love them. They’re easy, and they are just really … peaceful.”

These pets also provide Burns with her artistic medium. A fiber artist and weaver, she transforms their wool from coarse, earthy-smelling tufts into cushy heaps of cottony fleece. Sometimes she dyes the wool; sometimes she leaves it natural. She can card and spin the wool herself, and has, but recently, she sent 400 pounds of fleece to a spinnery in Vermont. It came back to her as superfine, double-ply threads of organic wool, the same soothing cream, gray, and dark brown colors as her sheep.

On her Norwood eight-harness loom, the threads become comforting woolen shawls, scarves, and Roanoke Island blankets. To wrap your shoulders in these wool creations is to warm yourself in the gentle, peaceful nature of Burns and the sheep she raises on Roanoke Island grasses. It is to surround yourself in a little piece of the island.

Burns believes her serendipitous path to weaving and fiber art came with help from above. Each step of the way, things just fell into place for her.

“I always knew I wanted to weave,” Burns says. “I like texture.” And you see that affinity for feel by the way she touches things, from her Newfoundland sidekick, to a pile of felted wool, to her long hair when she pushes it back. Her hands linger on things with intention, as if the nerves in her fingertips are more sensitive than others.

Burns never took up weaving during her childhood in western Pennsylvania. But when she attended North Carolina State University to study zoology, she met a friend whose mother was an expert weaver and fiber teacher. Burns expressed an interest in learning from her friend’s mother, but the woman was unable to take on a student at the time because of her poor health. After graduation, Burns got a job as a fisheries biologist with the N.C. Division of Marine Fisheries, moving first to Elizabeth City and then to Manteo in 1982.

Then in 1996, she took a weaving class with Feather Phillips at Pocosin Arts in Columbia and also received an unexpected call from her college friend saying that her mother was feeling better.

Ferne Winborne Sr., then 69, spent all of her time in her family’s compound in Atlantic. Burns hopped on the Ocracoke-Cedar Island Ferry and showed up at Winborne’s studio, the Long House, ready to learn. During the next four years, Burns traveled to Atlantic nearly every weekend. Every time Burns arrived, Winborne laid out reference books and magazines to create a study plan.

“I loved her lesson plans, how she saved magazines and left them open to a page for us to study,” Burns says. “When Ferne was learning, she had to have a library and a collection of friends. Now everything you need to know is on the computer. Back then, you had to do that more in a guild. You had to call people.”

The two of them studied, wove, dyed, and experimented all day and late into the night, wrapping themselves in their hand-woven shawls as night settled in.

“Ferne’s remarkable passion for all fibers and her love of natural dyes were infectious and will be with me forever,” Burns says. “I was her pet project.”

Winborne enjoyed the mentorship, too, and she renovated a house on her property for Burns to stay in during her visits. And Burns must have been a rewarding student.

“Sometimes it feels like I’ve done it before,” she says. “It came really easily to me. It makes me want to do it more.”

Winborne kept sheep and goats, which inspired Burns to purchase her own.

“You’ll never leave town once you get sheep,” Winborne warned her. “You have to take care of them every day.”

But that anchor isn’t a problem for Burns; she doesn’t like to leave the island much anyway. She gets anxious when she leaves sight of the water.

When Burns worked full-time in the fisheries, weaving and raising sheep provided a creative escape. She didn’t give up when Winborne passed away at age 72. She kept studying at Penland School of Arts & Crafts, attending workshops, and teaching herself new techniques. Every night and weekend, Burns returned to her loom, and her small house filled up with weaving supplies.

Burns began to sell her work and called her business Waterside Weaver. Through her connection with Winborne, Burns met Billy Parker, one of the founders of Outer Banks Conservationists (OBC), which owned Island Farm. Even before the farm opened to the public, OBC allowed Burns to keep her sheep on the property, store her looms, and hold weaving weekends with friends in the old house. Now that Island Farm is a tourist attraction, Burns’s sheep lend historical credence to the site; documentation shows that the original owners of the property raised sheep and wove with their wool. And Burns shares that same, old-fashioned mentality: weaving beautiful, useful things from her own sheep.

Over the past 15 years, Burns developed a preference for weaving with superfine threads and natural materials — cotton, linen, hemp, silk, Tencel, bamboo, and wool. Her pieces are not only functional, but also creative, complicated with dye or unusual patterns or something surprising, like pineapple husks or black needlerush from the local marshes. She experiments with techniques, such as shibori and nuno felting, and is known for her dyeing skills.

Burns sells luxurious scarves and shawls in a variety of materials; her signature, naturally colored Roanoke Island blankets, borne from her sheep; and simple, feminine tea towels, napkins, and pillowcases. Her handmade soap enveloped in a colorful pouch of felted, dyed Roanoke Island sheep-wool scraps is one of her best sellers. Burns chooses colors that reflect the island.

“I tend toward green, blue, and brown,” Burns says. “I wonder, is that from place, or is it just what I like? If I still lived in western Pennsylvania, would I do green and gray?”

Burns recently retired after 30 years in fisheries and is more serious than ever about her weaving. Today, the Waterside Weaver lives and works in a bigger house on the Croatan Sound, and the seat of her loom overlooks the water.

Molly Harrison is a freelance writer and editor living in Nags Head who writes extensively about the people and places of the Outer Banks.