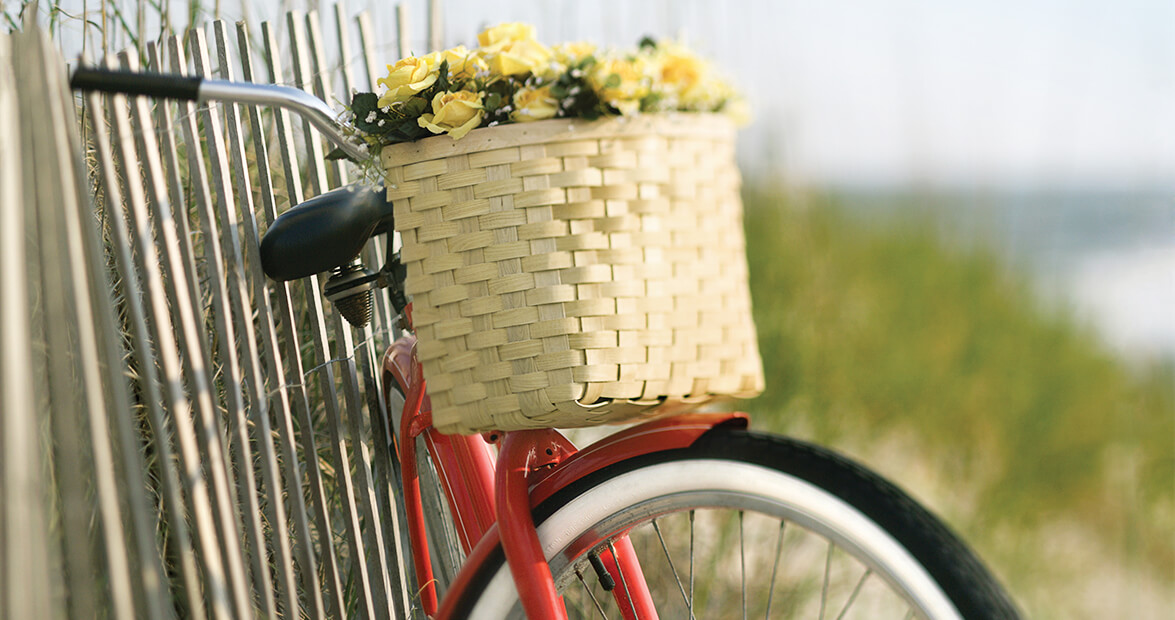 Go ahead and say bicycle, but really, it’s a bike. A bicycle is one of those sleek machines that cyclists — as opposed to bike-riders — scare you to death with, whizzing noiselessly past while you’re taking a walk. The kind with wheels (bikes have tires; bicycles have wheels) skinny as a hose. A bicycle is at the very top of the evolutionary ladder, and not everyone wants to climb that high.

I speak of my childhood Schwinn, a navy blue beaut with a white vinyl seat and a wicker basket that attached to the handlebars with leather straps and silver buckles. At some point — before I deemed them uncool — the handlebars also bore thin plastic streamers dangling from the (also white) handgrips, and a bell whose tinkle I activated with my thumb. My sister would probably vote for her low-rider with the high handlebars and long “banana” seat, a green vinyl number that seemed 3-D and sparkly, an aspect of cool that put all earlier bikes to shame. Then came racing bikes with complicated clicking gears and curled-under handlebars that left you with a backache. Then came mountain bikes, and onward and upward with gizmos and gadgets and engineering all the way to a bicycle, necessitating special footwear that fastens onto the pedals, meaning that should you forget you’re locked in, you’ll fall over like that tricycle-riding guy on Laugh-In used to do. And like my husband did, forever consigning his bicycle to the toolshed. Moral of the story: old-school backward pedaling is the best way to brake a bike.

Riding a bike shouldn’t be about speed anyway, but about the experience, that feeling of wind in your hair, the satisfaction of self-propelled forward motion, and freedom from engine noise and seat belts.

Beach bikes are terrific, with their big, wide seats, made for low tides and hard sand. You can see everyone on the beach and what they’re doing in a single ride. And it’s hard to beat coasting down a hill, sticking your legs out. Remember yanking up the front tire, like you were riding a bucking bronco? Remember hitching a ride on the flat, running-board-like seat over the rear wheel? Remember bell-bottoms getting stuck in the chain? Remember trying to get the chain back on? Hmm.

Navigating a bike on the street can be a source of anxiety. Thus, the greenway. These wide asphalt paths wind through many a North Carolina town and city. It’s hard to beat cruising alongside the mighty Tar River, and through the campus of East Carolina University, in Greenville. Try Greensboro’s greenway, too, and Hillsborough’s, and Charlotte’s, and, jeez, Raleigh has a hundred miles of them! Take your compass.

I learned to ride a bike on grass, which is a more difficult surface — uneven and soft — for balancing, but a kinder surface for falling. Palm scabs hurt. Learning to ride a bike is the ultimate accomplishment of early childhood, that longed-for moment when the training wheels come off, and you bravely climb on, and someone runs beside you, holding the seat, urging, “Pedal! Pedal!” Until, finally, that daunting combination of wobbled balance and uncertain control leads to the thrilling combination of boundless freedom and the ability to go somewhere on your own, on transportation other than your feet.

And once you’ve learned, you can’t believe you ever didn’t know how. After all, “It’s just like riding a bike …”

Some twilit dusk, on some neighborhood street, venture out to listen. Even if you can’t see that parent, that child, that bike, chances are you’ll hear the encouraging words everyone knows as well as their own name, an unchanging refrain, generation to generation: “Pedal! Keep pedaling!”

Ready to ride? Three bike trails across the state: