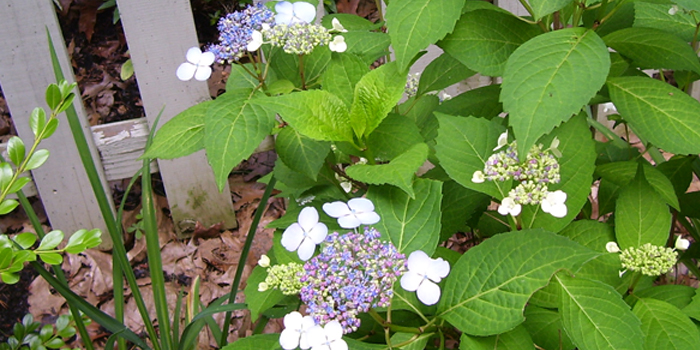 Blue is a cool color.

So cool in fact that landscape designers choose plants with blue flowers to complement a patio or other outdoor living space – places that offer refuge from the stress of a fast-paced world. Topping the list for ornamental shrubs for these places is the Bigleaf hydrangea.

The Bigleaf or French hydrangea, Hydrangea macrophylla, is no stranger to the South. They’ve found their way into most country gardens, thriving in the shadows of towering shade trees. Still, Bigleaf hydrangeas are not native to North Carolina. Instead, they originated in eastern Japan. And the French also propagated the plant as far back as the 19th century, when nursery production in France spurred worldwide distribution of the ornamental shrub.

A unique feature of the hydrangea is that soil pH affects the color of its flowers. Blue flowers appear when it’s planted in acidic soil. To intensify the blue color, some gardeners apply aluminum sulfate fertilizer to the soil. The flowers turn pink in alkaline conditions and when garden soil is limed to achieve a higher pH. New cultivars, such as ‘Pia’ and ‘Forever Pink’ were released to satisfy the requests from urban gardeners desiring a more pastel color scheme without the fuss of altering the soil environment.
Today, there are hundreds of new selections thanks to decades of hybridizing (ref: Passalong Plants, Bender & Rushing). The Tar Heel state even boasts a native hydrangea in the Smooth hydrangea, Hydrangea arborescen, a parent of the ever-popular ‘Annabelle’ cultivar and new ‘Invincibelle Spirit’.

There are two main classes of Bigleaf hydrangeas—mopheads and lacecaps. The mopheads, referred to as hortensias or snowballs, have showy, globular-shaped infloresences of sterile flowers. The sterile flowers are petal-like, except for the stamens that contain pollen sacs. A lacecap flower consists of a ring of sterile flowers with a center of fertile flowers, and a flower head that’s broad and flattened. Both forms are attractive in their own right and add interest wherever they’re used.

When my wife and I built our home 20 years ago, I chose lacecap hydrangeas to plant outside our master bedroom window. Through the years, we’ve thoroughly enjoyed the view of looking out onto a bed of blue lacecaps. They typically begin blooming in mid-May and continue the show into summer. Many plants are best appreciated when viewed from a higher elevation; doublefile viburnums and lacecaps work best in that setting.

Since hydrangeas love water, be prepared to keep plantings mulched and irrigated in beds that receive full sun in the summer. The hyndrangea’s medium-textured foliage is a good foil for plants with fine textures, such as ferns. The big turnoff for some gardeners is that hydrangeas are deciduous and look naked during the winter season.

Bigleaf hydrangeas set their flower buds in the fall months, so don’t prune them heavily in early spring. Improper pruning is often why hydrangeas fail to bloom. Cold winters in the Piedmont and mountain regions can also cause damage, resulting in fewer blooms. It’s best to prune hydrangeas after their flowers fade, and cut back old canes to keep the plant’s height in check. Hydrangeas also benefit from an occasional application of organic fertilizer when their foliage lacks a lustrous green color.