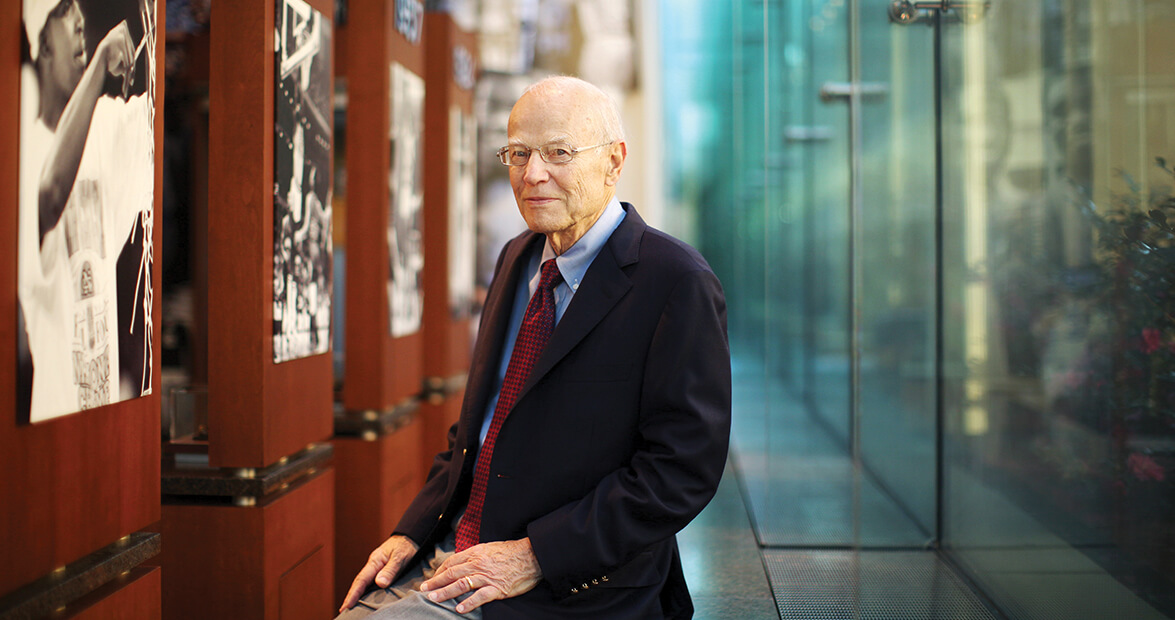 Bill Guthridge pushes button No. 6. It lights up beneath his finger, the television screen hanging from the ceiling comes to life, and then, magic …

The aging coach travels back three decades to New Orleans, to a moment when he is sitting on a folding chair in front of 60,000 people in the Louisiana Superdome watching history unfold. His North Carolina Tar Heels — Jimmy Black, Matt Doherty, Sam Perkins, James Worthy, and Michael Jordan — are competing for the 1982 NCAA men’s basketball championship. As Perkins catches Georgetown’s final, failed shot punctuating UNC’s 63-62 victory, a grin spreads across Bill Guthridge’s face.

“Wow, that was a long time ago. Can you believe how young Sam looks?” he says.

Today, far from that day in the Big Easy, Guthridge is frail. He leans on a railing for support, but he seems to grow younger watching the video on the television screen.

As the video plays, a dozen schoolchildren on a field trip gather around Guthridge, their eyes transfixed by the unfamiliar drama playing out on the television. The kids giggle at the sight of the players’ skimpy basketball shorts. Many of the children are clearly Tar Heel fans. They let out a collective cheer when UNC sinks the game-clinching basket. Then one of them turns to Guthridge and asks, “Do you know who made that winning shot?” Guthridge tells them it is Michael Jordan. They’ve never heard of him.

None of them recognize Guthridge, either. In fact, for the 90 minutes that the former UNC coach and I share inside the North Carolina Sports Hall of Fame, not a single visitor identifies the Hall of Famer in their midst, even as he is standing right beside them watching highlight videos, his image often in the background on the screen.

The history of the North Carolina Sports Hall of Fame traces back 50 basketball seasons, all the way back to when Bill Guthridge was a 26-year-old assistant coach at his alma mater, Kansas State University. The Hall’s initial 1963 class of inductees featured Asheville’s Charlie “Choo Choo” Justice, the renowned UNC running back who finished second in the Heisman Trophy voting in 1948 and ’49.

For several years, it was a Hall of Fame in name only. It had no hall, no place to display its memorabilia, until 1969, when the collection found a temporary home inside the old Charlotte Coliseum. The sports relics remained there until 1982, when the Hall of Fame morphed into an exhibit at the North Carolina Museum of History in downtown Raleigh. Today the Hall occupies its own 4,000-square-foot space on the third floor of that museum, and each year 350,000 visitors come to learn the stories and view the mementos of the Hall’s 300 members, including the most recent 2013 class featuring Bill Guthridge. 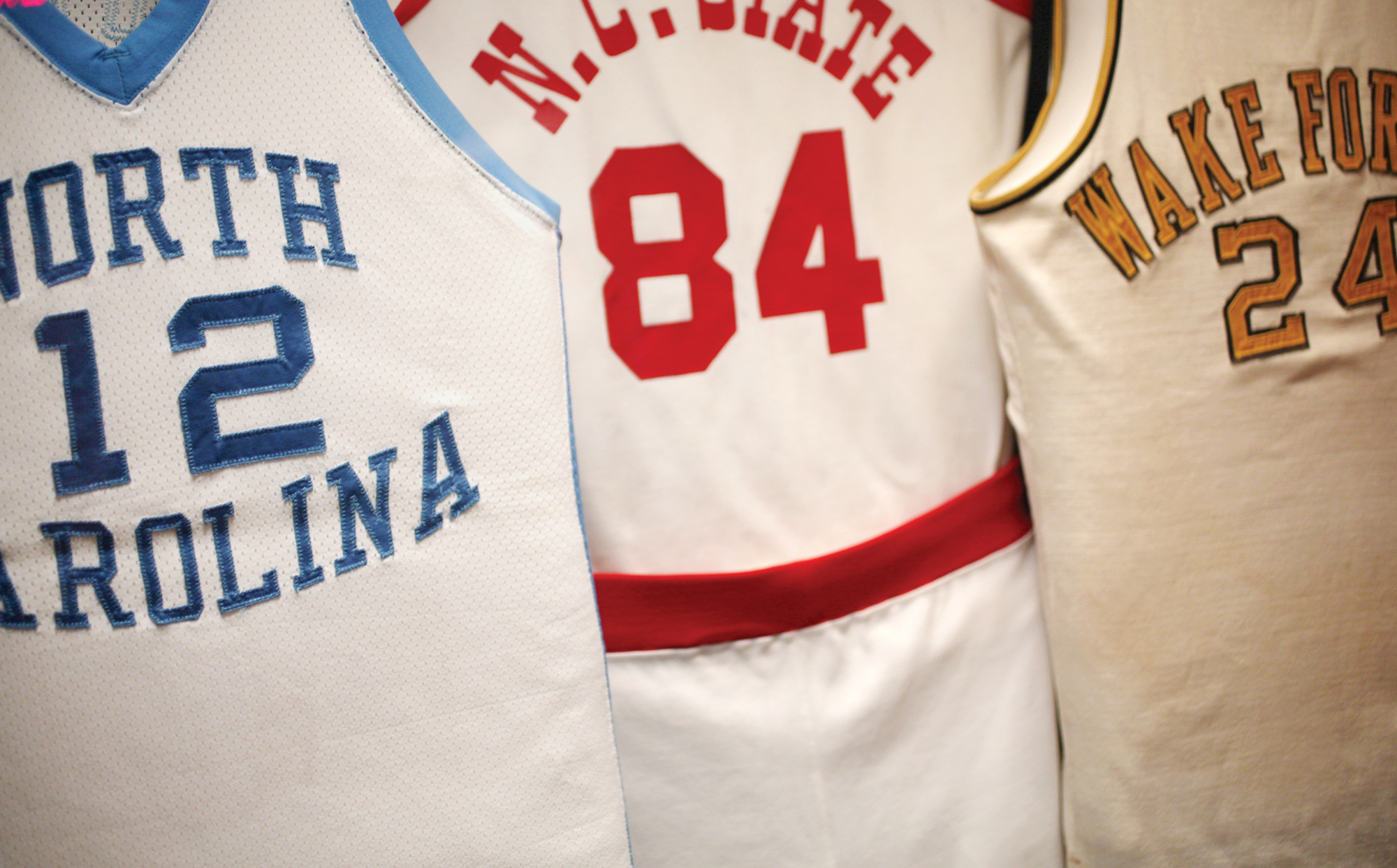 Phil Ford’s #12 jersey hangs with those of other ACC greats. photograph by Travis Dove

Guthridge won a total of 80 games in his three seasons as UNC’s head coach. Although that may not sound like a Hall of Fame résumé, consider that Guthridge was also an assistant coach to Dean Smith at UNC for 30 years and was part of 867 Tar Heel victories. Including his career as a player and assistant coach at Kansas State, Guthridge played or coached in 14 Final Fours, more than anyone else in NCAA men’s basketball history.

Guthridge has visited the North Carolina Sports Hall of Fame only once before, for just a few minutes on the evening of his induction in May, so on this Friday morning he plans to savor the moment.

When Guthridge reaches the trophy case honoring the Hall’s 2013 class, he pauses for a moment to gaze through the glass at his gift to the museum, a 2009 NCAA championship ring. Guthridge says he chose that particular item to represent him for one simple reason: He thought it would be “sparkly enough.” 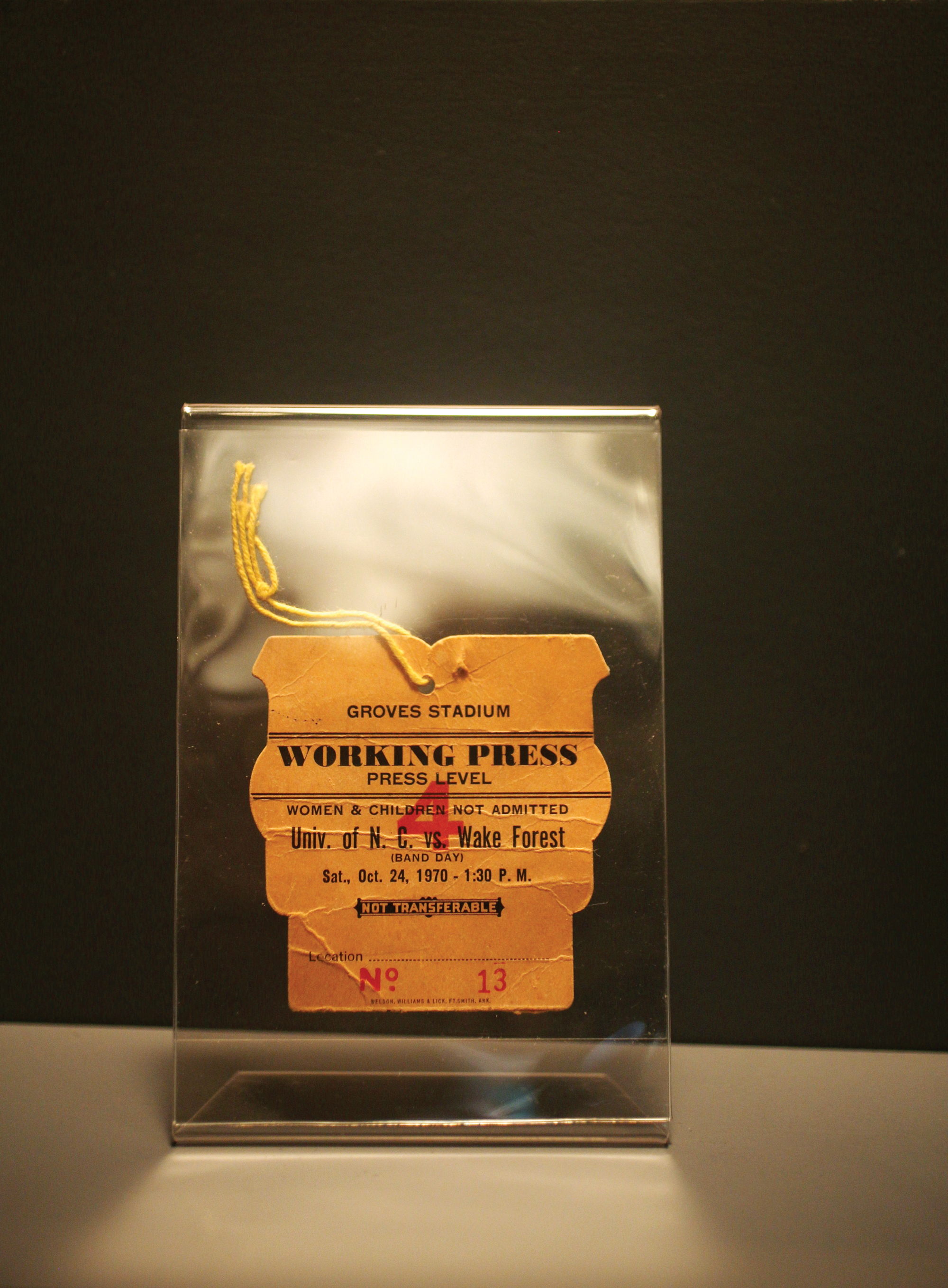 Around the next corner, Guthridge walks into the museum’s climactic exhibit, the dessert of the place, which fittingly, here on Tobacco Road, is devoted to basketball. Guthridge can’t help but turn into a tour guide. He spots John Lucas’s blue No. 15 jersey from Hillside High School in Durham and remembers recruiting Lucas in the early 1970s. “John came to UNC games and he’d sit in the first row at Carmichael Auditorium,” Guthridge says. “He was a great player, but we wound up signing this other guy from Rocky Mount named Phil Ford.”

Ford’s iconic No. 12 Tar Heel jersey hangs in a nearby case and, upon seeing it, Guthridge recalls the first time he saw Ford play. Ford scored a basket at the final buzzer to win that game and then sprinted straight off the court and downstairs into his team’s locker room. “Phil was the most gifted point guard I’ve ever coached,” Guthridge says, staring at the jersey. “After the final game of every season, Phil cried because he just loved playing for Carolina so much.”

Strolling from case to case, Guthridge notices Jim Valvano’s N.C. State warm-up suit — “He was a really enjoyable character, but his legacy may be finding a cure for cancer.” James Worthy’s familiar No. 42 Los Angeles Lakers jersey — “Great high school player in Gastonia, great college player, great pro, great man.” Former N.C. State Coach Norm Sloan’s distinctive plaid sport coat — “Because of our rivalry, he didn’t really like us much.” David Thompson’s iconic No. 44 Wolfpack jersey — “David told me one time that he had originally wanted to come to Carolina before he went to State.” A plaque presented to former legendary North Carolina Central Coach John McLendon — “There’s no telling what he could have done if he had white skin or been black later.” And finally, Dean Smith’s lapel pin from the 1976 Olympics — “I was one of his assistants with that team and there is nothing quite like the pride of coaching for your country.” 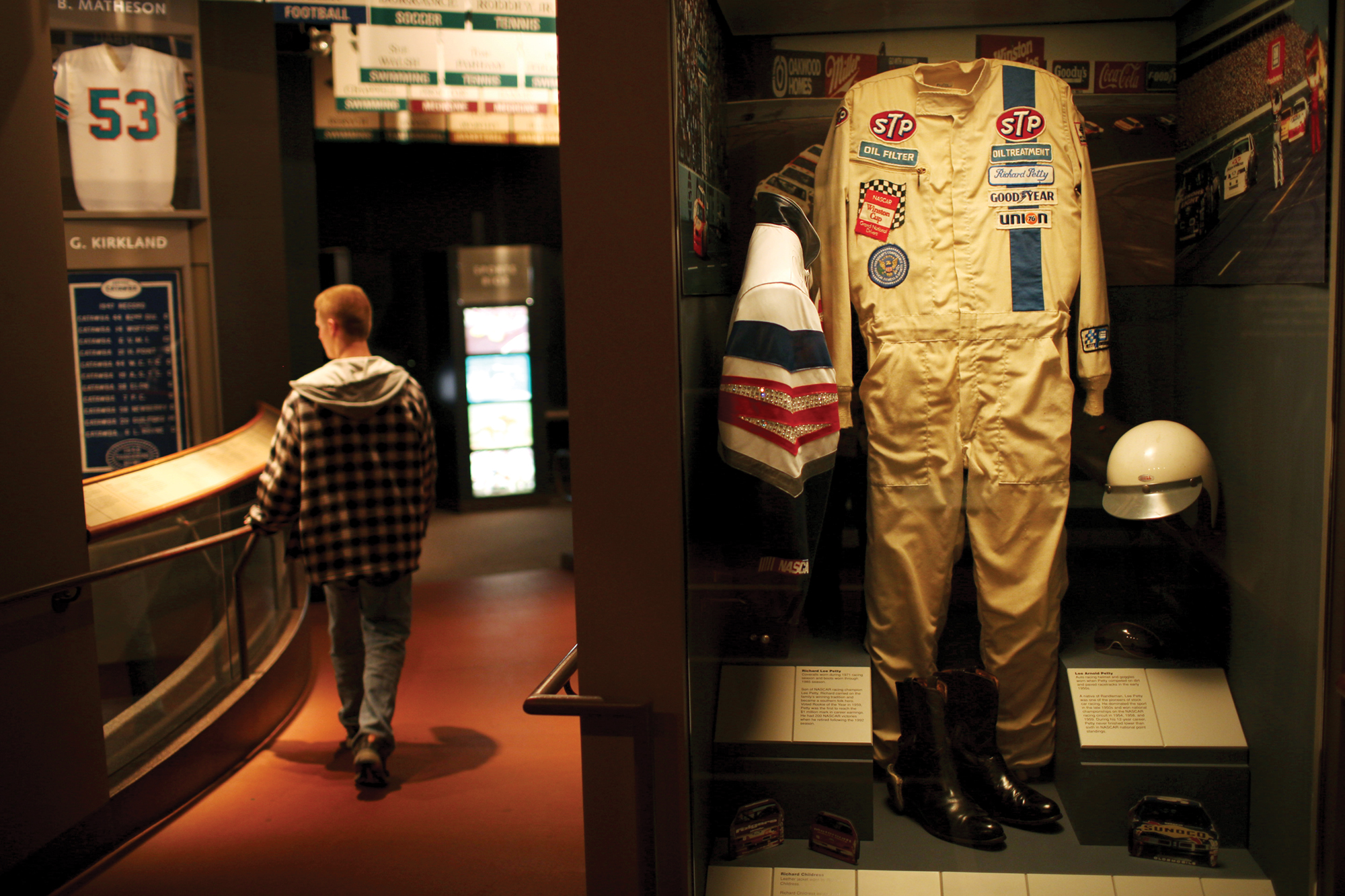 Richard Lee Petty’s coveralls from 1971 stand proudly next to his car. photograph by Travis Dove

The schoolkids linger, mesmerized by the videos, some of which date back to before their parents were born. Through their impressionable eyes, Guthridge sees the power of this place. Nobody is born a Hall of Famer, but through the souvenirs and the stories they tell, younger generations can be inspired — not just by Michael Jordan, but also by athletes like Eckie Jordan, a five-time All-American basketball player who once led her Hanes Hosiery team to 102 straight victories. They can find motivation in the journeys of former High Point College Coach Virgil Yow and former N.C. State and U.S. Olympic women’s basketball Coach Kay Yow. They can understand the very different paths to fame walked by Wilmington’s Meadowlark Lemon, the former Harlem Globetrotter, or by Kinston’s Cedric “Cornbread” Maxwell, a two-time NBA champion, or even by Bill Guthridge. In many cases, they can actually watch them in action. “When Michael Jordan went up for that game-winning shot, I just knew he’d make it,” Guthridge tells the schoolchildren, never revealing his UNC connection. “You know, Michael got cut from his high school team and kept working hard until he became the best NBA player ever.”

Guthridge wants to see one more video. He pushes button No. 11, it lights up beneath his finger, and more magic … the coach travels back two decades, back to a moment when he is sitting on a folding chair in front of 60,000 people in the Louisiana Superdome. There’s Michigan’s Chris Webber grabbing a rebound in the waning seconds of the 1993 NCAA championship game. UNC’s ahead of the Wolverines by two points. “Watch this,” Guthridge says to the children. “Chris Webber calls a time-out and Michigan didn’t have any time-outs left. That’s a great lesson about paying close attention to your coaches.”

The students eventually disperse and Guthridge begins to slowly exit the basketball section when his eye catches a familiar face on a banner hanging in the rafters. With a wry smile, he asks, “Who’s that guy next to Terry Holland?”

He doesn’t have to be told that it’s Michael Jordan.