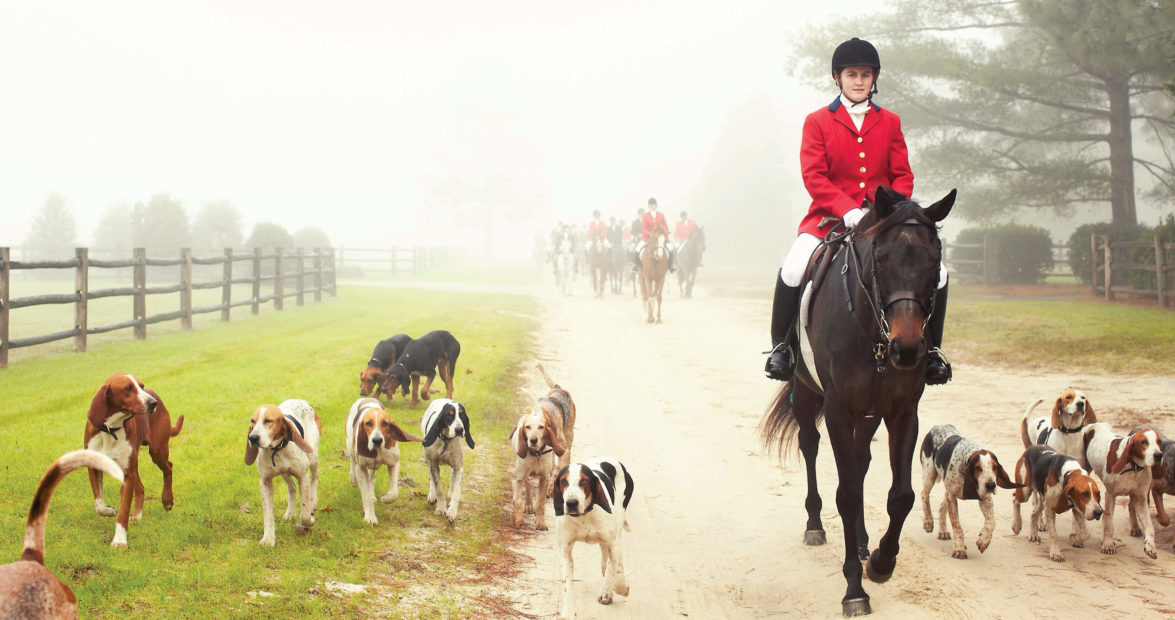 Codie Hayes draws a deep breath as she nudges her horse onto the blacktop and into the fog. A pack of 32 foxhounds and the mounted hunt staff of the Moore County Hounds follow her down Youngs Road through the heart of Southern Pines horse country. For nearly a century, Moore County Hounds has held its opening meet, popularly known as The Blessing of the Hounds, on Thanksgiving morning. Until today, Hayes rode behind her grandfather, who is the official huntsman, but his nearly fatal riding accident 48 hours earlier changed everything. Now, the 17-year-old senior at Pinecrest High School leads the oldest, grandest foxhunting tradition found in the Carolinas.

The cadence of horseshoes striking the pavement announces the parade long before it can be seen through the haze that has swallowed horse country. Scores of tailgaters dressed in their equestrian finest step aside to let Hayes pass. Cameras flash in the diminished light, trying to capture the splendor of the riders dressed in scarlet jackets (known as pinks), snug-fitting white breeches, leather riding boots, and hunt caps. Visiting riders wear the required black and navy coats, and a handful of these visitors sport top hats and black tailcoats called shadbellies. The outfits keep with aristocratic tradition, but they also protect riders from tree limbs and brush while providing some degree of warmth, a welcome bonus on this unusually cold Thanksgiving Day.

From her perch, Hayes sees the expectant faces of adults and children staring back at her as they shiver in their coats and caps. Her grandfather always told her leading the parade down Youngs Road, with excited crowds parting for him, makes him feel like Lance Armstrong winning the Tour de France. For Hayes, it’s just “nerve-racking.”

Hayes guides the procession to the center of Hobby Field, a 60-acre hayfield, where an Episcopal priest awaits. The hunters and hounds congregate in a rough circle around the priest with the hounds on the first row, waiting in reverent silence for the blessing.

Wearing black and white vestments, the Rev. Meaghan M. Kelly begins the liturgy with Psalm 19:1, followed by the Lord’s Prayer. She then raises her right hand high in the air and begins: Bless, O Lord, we beseech You, rider and horse and hound.

The ecumenical tradition harks back to early medieval days when hunters believed an intercession from St. Hubert of Liege, the patron saint of hunters, would protect their hounds from disease and keep them safe during the hunt.

With the final amen, Kerrie Hayes, Codie’s mother and first whip at Moore County Hounds, flies out of the field, pulling a foul-smelling, fox-scented drag behind her horse. The hounds follow the trail that she lays for them in this fox-friendly mock hunt.

Codie Hayes launches the hounds with a sharp blast from her brass horn. Almost immediately, the hounds strike the track and begin to “speak,” individually at first and then as a group. The cacophony reverberates across Hobby Field as the chorus of rejoicing hounds grows louder. Hot after the scent, the pack bursts from the field with Hayes close behind. In a flash, she jumps the fence that surrounds Hobby Field and disappears into the longleaf pines of the Walthour-Moss Foundation.

The hounds reach full cry, and Hayes gallops full bore after them. She ducks limbs, dodges stump holes, and tries to avoid tree roots, which are especially slick today. When Hayes encounters wooden fences in the forest, she clears them in a single adrenaline-fueled leap. All the while, she tries to anticipate what the hounds will do next. With help from the two whips, she shepherds them along the track, guarding them from possible danger.

“You kinda have to be ahead of the game. You have to think ahead. It’s like a chess game,” the former cross-country runner says. “You can’t just dwell on one move.”

For the hounds’ sake

While Hayes charges through the forest, her grandfather, Joseph “Jody” Murtagh, recuperates in the intensive care unit at Moore Regional Hospital in Pinehurst. Two days before the meet, Murtagh nearly died doing the same job.

On that day, the pack headed toward a busy highway, and Murtagh tried to intercept them. Charging full speed down a driveway, he hit a steel cable stretched across it.

Kerrie Hayes and Missy Murtagh knew something was wrong when their father didn’t answer his cell phone. They rode their horses back to the road where they last saw him. There, they met a Jeep that slowed to a stop.

“The guy gets out and goes, ‘Oh, by the way, there’s a dead person laying next to that horse back there.’ My sister was like, ‘Oh,’ and we galloped down,” Kerrie says. “He was just coming to, and the horse was standing right there next to him. He didn’t look that good.”

In fact, Murtagh broke eight ribs and, as they later learnedwas bleeding to death internally. The horse was fine. It landed on top of the 67-year-old huntsman. As soon as Murtagh regained consciousness, he asked about the hounds.

“What we’re doing as a job, and this is what I blame my accident on, is we’re really concerned about the hounds,” Murtagh explains. “That’s our job.”

For Codie Hayes, this devotion to foxhounds and mounted foxhunting stretches back at least five generations to Jody Murtagh’s maternal and paternal grandparents. His grandfather, M. Roy Jackson helped start the now-renowned strain of American foxhounds called Penn-Marydel hounds, several of which now make up the Moore County Hounds.

“She was riding before she was born,” her mother says, laughing. “Sometimes, we would walk the hounds on foot, and she would be in a backpack on somebody’s back.”

When she was 4 years old, Hayes began hilltopping (following the pack at a distance with a group of slower riders) on a small paint pony. Six years later, she was riding a thoroughbred as a whip, helping her grandfather and mother with hunts. She stuck with foxhunting, sacrificing high school sports to spend more time with the hounds.

“At night, she’d come out, and still does, and go in with the puppies and lay there and play with them,” Murtagh says. “It’s just a way of life.”

In North Carolina, this way of life dates to 1914, when author James Boyd and his brother, Jack, founded the Moore County Hounds at Weymouth Woods on the outskirts of Southern Pines. They hunted the pack until 1942, when they transferred ownership of Moore County Hounds to William Ozelle “Pappy” Moss.

Legends in the Sandhills horse community, Moss and his wife, Ginnie Walthour Moss, are largely credited with preserving mounted foxhunting in North Carolina. During their lifetimes, the Mosses purchased hundreds of acres that surrounded their home at Mile-Away Farm and worked with other foxhunting and horse enthusiasts to create fire lanes and build bridges to enhance the cross-country riding. In 1974, two years before Pappy’s death, they established the Walthour-Moss Foundation and donated 1,700 acres so that the equestrian community would have a place to ride and thrive. Today, the Walthour-Moss Foundation, which is open to the public, has grown to 4,200 acres.

The horse country of Southern Pines is unlike any other community in North Carolina. Pasture-to-pasture horse farms are separated by painted wood fences and connected by secondary sand roads that make for comfortable horseback riding. Most of the homes are built around horse stables. On Thanksgiving morning, the community comes together to show its pride in the equestrian culture and celebrate the tradition of The Blessing of the Hounds.

Almost an hour after she started laying the track, Kerrie Hayes pulls the drag back through Hobby Field. The joyful noise of the hounds soon fills the misty air along with the thundering hooves as loud as a cavalry charge. The riders jump the fence, returning to the starting point, and the race is done.

Everyone, hounds and all, gathers in the fog on Hobby Field. Soon, following the feast called the hunt breakfast, splendid sunshine will erase the last shreds of fog. But for now, the haze remains. The children crowd around to pet the hounds, who seem to enjoy the attention. A smiling Codie Hayes is surrounded by well-wishers who congratulate her.

Parents and grandparents shuffle the kids over, one by one, to take photos of them standing next to the horse that carries the girl who leads the hounds.