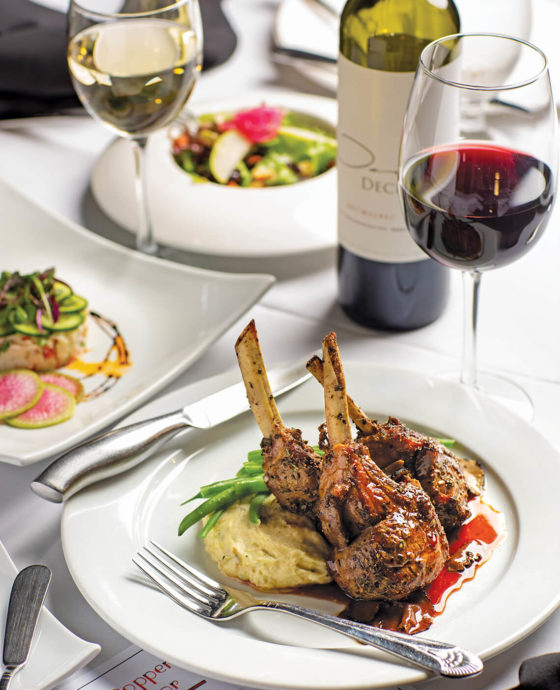 The intersection of Herbert and Main streets in downtown Hayesville has always been a “bustling” location. That is, for a small town that’s less than a square mile with a population that’s never topped 500. Here, neighbors have gathered on the grounds of the historic Clay County Courthouse for community events for generations. Near Main Street, a trio of service stations with fiercely loyal patrons — a Sinclair, an Esso, and a Gulf — once filled residents’ tanks.

“I think you patronized one over the other based on your politics,” quips Ada Huff, whose dad, Chef Dennis Barber, opened The Copper Door more than a decade ago, bringing a taste of the French Quarter to this little mountain town.

Barber knew he’d found an unlikely home for his dream restaurant in 2004, when he stood in the middle of downtown and saw the potential for growth. “When we came up to look at the location — which was completely dilapidated — I knew there was an opportunity,” Barber says.

Situated in the shadow of Piney Mountain and just north of the Georgia state line, Hayesville may not be the largest dot on the map, but fans of fine dining have come knocking thanks to Chef Dennis Barber’s Copper Door. photograph by Eric Haggart

Later that year, he began converting the former Jack Woods Gulf Service Station into The Copper Door, a fine-dining destination with a New Orleans vibe. The restaurant opened in 2007 and, two years later, expanded into the adjacent Wallace Crawford’s Sinclair Service Station. The result was a series of dining spaces reminiscent of a maisonette turned café like those back in New Orleans, where Barber grew up.

The canopied pull-through where travelers once gassed up was transformed into The Copper Door’s entrance; the service station mechanic’s lift was concealed under a new bar floor. An oversize, two-sided stone fireplace occupies much of the main dining room. Molten glass artwork by local artist David Goldhagen shares space with oil paintings of irises by Barber’s mother, Ruby, and a nostalgic oval metal sign sporting the friendly Sinclair dinosaur adorns one wall. Otherwise, nothing in the restaurant hints at the fact that this space was once occupied by cans of STP and vending machines full of Nabs.

The backstory, and success, of The Copper Door shouldn’t come as a surprise.

Born in Memphis, Barber grew up in New Orleans, where his culinary journey began casually, cooking at a small café in a pre-Food Network New Orleans — about the time a young Emeril Lagasse was starting out. After a nine-year stint in the Air Force as a bombardier, Barber went to culinary school and earned his kitchen stripes in fine dining in and around New Orleans, first at the Westin Canal Place near the French Quarter and later at the Petroleum Club.

Barber not only brought his cooking skills to Clay County, but he also brought his hammer.

Coincidentally, Barber was trying to establish a restaurant in an old Atlanta filling station — while also working in sales for BellSouth — when a friend’s interior design customers mentioned that they owned a service station in North Carolina just waiting to be transformed into a restaurant.

Once Barber committed to coming to Clay County, he not only brought his cooking skills, but he also brought his hammer. “I did all of the renovation work,” says Barber, who credits his woodworking skills to his father, who was both a carpenter and a preacher.

The result is an upscale, off-the-grid destination restaurant with a French Quarter-inspired menu that is both straightforward and sophisticated. 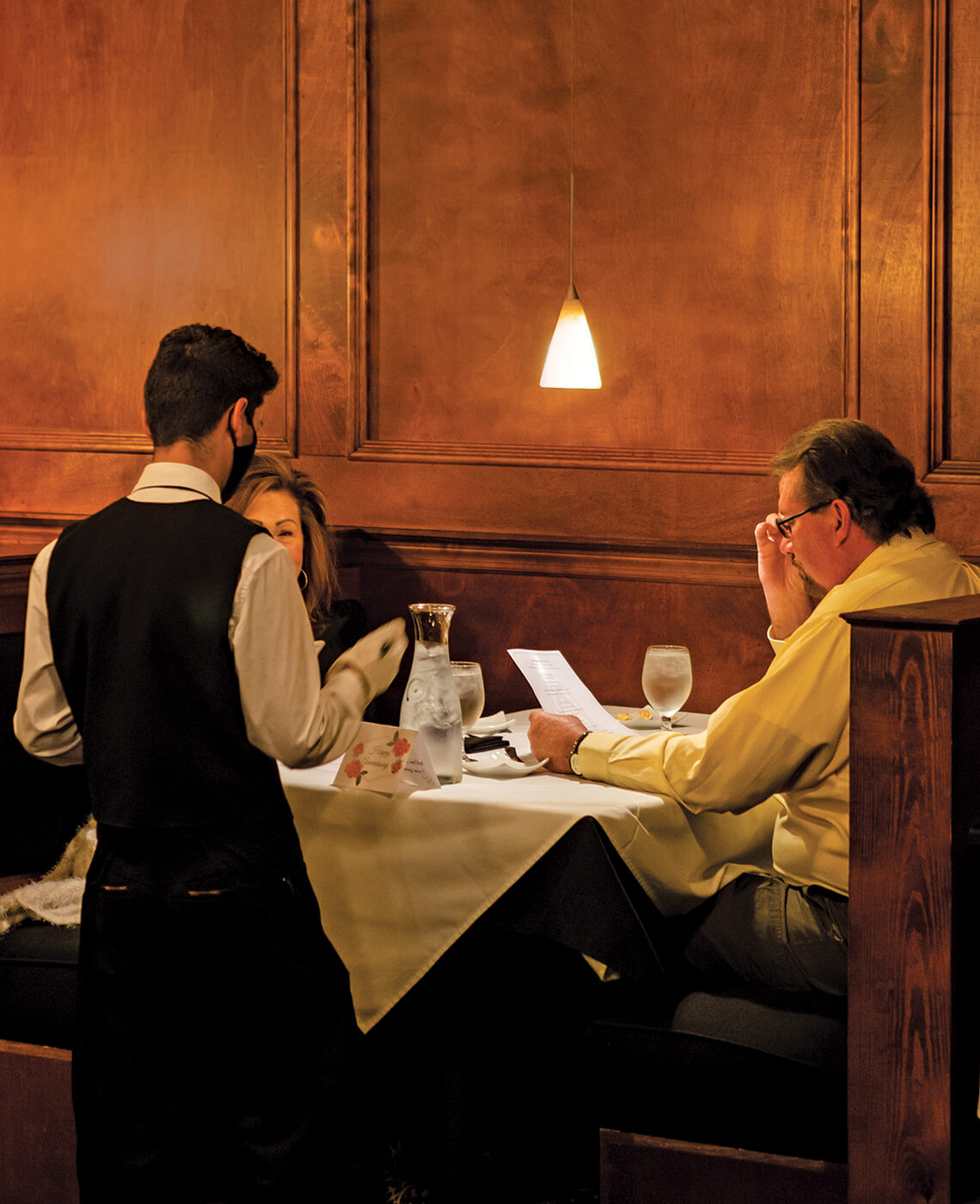 Dining at The Copper Door is more than just “fine” — it’s an experience. photograph by Tim Robison

Guests may begin with a scratch-made cocktail or a craft beer. But when it’s time to dine, it’s hard to resist a bottle from the restaurant’s 200-pluslabel wine cellar that was created and is maintained by Advanced Sommelier Nick Demos and in-house wine steward David Wood.

Demos also hosts quarterly five-course dinners that pair flavors of New Orleans with pours from around the world. Past wine dinners have featured braised celery salad, buttery and infused with a hint of sweet paprika and pecans, all under a spunsugar dome — a nod to the New Orleans Saints’ Superdome back in Barber’s hometown. 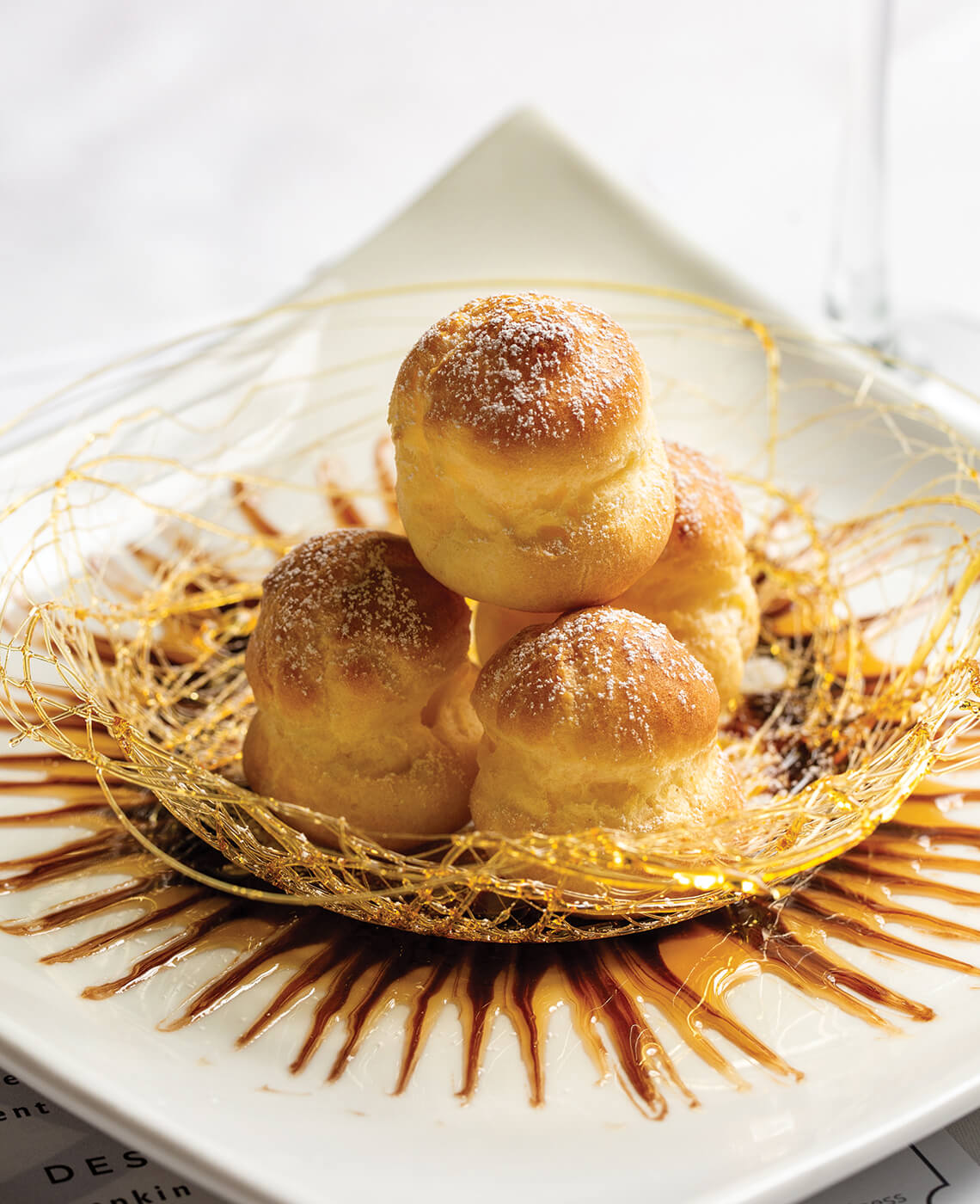 Profiteroles in a golden nest of spun sugar. photograph by Tim Robison

Today, thanks to Barber’s vision and focus on bringing a little laissez les bon temps rouler spirit to the mountains, “fueling up in Hayesville” has an entirely new meaning.