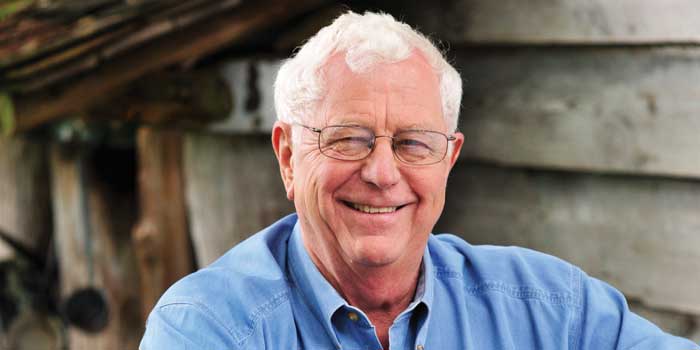 If the Yankees had their way, Bob Timberlake’s art studio would’ve been burned down long ago.

In her apron, Mrs. Shoaf walked out of the kitchen and saw a group of Union soldiers on horses, trotting down the path. They tipped their hats at the housewife, real friendly-like.

She knew what they were doing, though. They’d done it to her neighbors and friends.

Lexington is just north of Salisbury, which was home to one of the most notorious prison camps in the South during the war, and Mrs. Shoaf’s husband, along with many men in the area, had enemies in the Union.

Under orders, the soldiers continued moving down the lane.

In her apron, Mrs. Shoaf walked alongside them.

“Mrs. Shoaf,” the lieutenant said, “I don’t want to do this, but I have orders. I have to burn the barn.”

In her apron, she moved between the men and the barn. The lieutenant ordered her to move aside.

The lieutenant ordered his private to proceed and light his torch. The private got off
his horse.

From behind her apron, Mrs. Shoaf pulled a gun and pointed it at the private.

The lieutenant ordered her to put it away and tried to rationalize with her: “Mrs. Shoaf, if you shoot him, we’ll kill you.”

Mrs. Shoaf, now surrounded by the children, kept the barrel aimed at the private.

“You’re not going to burn the barn while I’m alive,” she told the lieutenant. “You may kill me, but I promise you, I’ll kill him, and I’ll get another shot off before you get me, too.”

That barn that she protected so dearly, built in 1809, cared for through the centuries, is now the core building of Bob Timberlake’s studio in Davidson County.

“The lieutenant backed down,” Timberlake says, recalling the story he’s heard for years from a soft-cushioned chair with his feet propped on a coffee table, “and he trotted away, and I have a studio.”

Timberlake bought the barn in 1986. He had it moved from its previous location just west of Lexington to a piece of land on the east side of town. Construction workers renovated the oak structure, board by board, until it became a two-bedroom, wide-open piece of art in itself.

Every detail was done to Timberlake’s specifications.

“This is nothing but a big piece of sculpture,” he says. “Every window was put in just so I’d get the sunlight like I wanted it. I was like a kid in a playhouse. I knew this place was going to produce something.”

A few years later, in 1989, after extensive renovations, Timberlake had just started decorating his new studio with old, heirloom furniture when he took a break to go eat some of his beloved Lexington barbecue.

At the barbecue stand, he saw an old friend, Jay Young, whose family owned Lexington Furniture Company. Timberlake invited Young to come by and see the studio.

Timberlake opened the back door to the studio and Young stepped in. Instead of focusing on the structure, Young noticed the furniture — old, wooden, rustic, comfortable. Timberlake, a longtime collector of everything, had never given his furniture much thought, other than that he’d protect it as family property.

But it fit the studio. It fit the old barn look. It was accessorized, before Timberlake even knew what the word meant.

Young turned to Timberlake and said, “Bob, we have to do something with this furniture.”

And the Bob Timberlake furniture line was born.

Before he founded his furniture business, Timberlake’s only furniture creation was a big chest he made in an industrial arts class when he was 14 years old.

He spent 350 hours on the chest, and it was good enough to enter into a contest for furniture-making. He won the contest and earned a trip to Dearborn, Michigan, to an industrial arts conference with other winners from around the country.

He didn’t touch furniture again, though, until Young walked through the door that day in 1989. At the time, the furniture industry was struggling. But in fall 1990, Timberlake decided to introduce his line at the International Home Furnishings Market in High Point.

His furniture, called the “antiques of the future” by some publications, was a hit.

“I had people all over the world thanking me for bringing excitement back to the furniture industry,” Timberlake says from his studio. “And all of this was created here.”

Pieces of Timberlake’s furniture line are all around the studio, from couches to chairs to coffee tables. And of course, his paintings also line the walls.

The Timberlake signatures are scattered among family possessions, such as images of his ancestors and other pieces of furniture handed down through the years.

Timberlake speaks dramatically about his furniture, and he often uses quotations.

Timberlake has sold more than $1.3 billion in furniture since 1990.

Timberlake may be a collector, and he may own his own furniture line, but more than anything, he’s a painter.
He has several hundred paintings, and reproductions of them have sold worldwide. Some devoted fans have them all. But even they might not know just how it all happened for this Davidson County son.

He tells the story like this, sitting back in one of his chairs:

In 1971, he and his father took a train to New York with six pieces of his work wrapped tightly. He had two appointments in two showrooms, and he knew only one man in the city by name. After getting off the train, Timberlake and his dad took a taxi to their hotel, the New York Hilton. They pulled up to the hotel, and Timberlake’s dad got out. The young artist tried to get out, too, but his dad pushed him back in and told him to go to his first appointment without him.

He arrived at Hammer Galleries at 10 a.m., and he knocked on the window. The man he knew, Bill Mitchell, opened the door for him. Timberlake started unwrapping his paintings when the elevator opened, and off stepped Victor Hammer, the gallery owner. Hammer pulled on his overcoat and walked toward the door.

Hammer noticed the unwrapped prints and looked up at Timberlake and said, “I think we can sell these. I’ll take them,” and then walked away.

Timberlake had only been in the studio five minutes. Mitchell told him to go into the back and meet the administrative assistant, so she could gather his information. She just kept typing, never looking up from her desk as she talked to Timberlake.

“You mean you just came off the street from North Carolina?” she asked him.

She pointed to a table covered in other people’s prints.

“I hope you know what’s just happened to you,” she said. “I’ve been here seven months, and five or six artists come in here every day trying to sell their work. And in the seven months I’ve been here, Mr. Hammer has not even talked to another artist.”

Then she paused and looked at him.

“And by the way,” she said, “he was just here to pick up his overcoat.”

Timberlake went back to the hotel, and his dad wasn’t there. So he left his dad a note on hotel notepaper. It’s now framed in his studio.

“SUCCESS at 10:15 on the first gallery,” Timberlake wrote. “Victor Hammer wanted them all.”

Art critics  have never gushed about Timberlake’s work. But Hammer once told him not to worry about that.

“Nobody likes your art but the people,” Hammer told him. “And they always will.”

Timberlake, who turns 75 this month, is still a person of the people, particularly here in Lexington.

Walking with Timberlake into Hendrix Barbecue, located less than a mile from the private entrance to his studio, is like traveling to the White House with the president. He pushes the door open, and handshakes start flying his way.

He knows the waitress is in her second semester of nursing school. He knows he wants a plate of chopped pork and a side of hush puppies and sweet tea. And he knows his old friend standing outside the door needs to stop smoking.

“You’re not still doing that, are you?” he asks the man.

Timberlake’s descendants have been here since the 1700s, and even as he rose to the top of his professions, he never considered leaving Lexington. He even shunned an industry-wide push to have his furniture produced internationally and continues to make it with North Carolina companies.

“I didn’t want [my furniture] made overseas,” he says. “I wanted it made right here by people I was kin to.”

And nothing comes a close second.