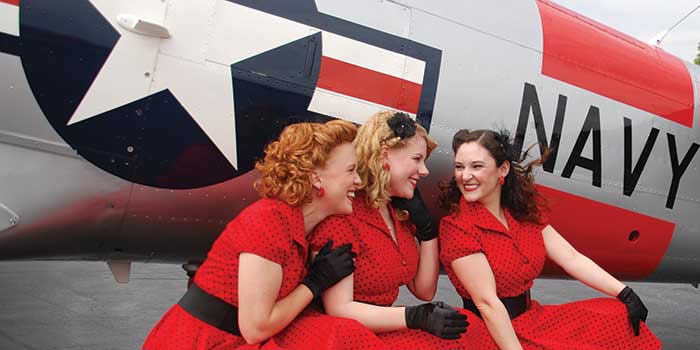 Dewitt Wells may be North Carolina’s only 89-year-old groupie. And even if he’s not, he’s almost certainly the only groupie to have participated in the D-Day invasion of Normandy and fought in the Battle of the Bulge.

Wells, who lives in Winston-Salem, was a soldier in the pugnacious 90th Infantry Division, a unit known for its hard-earned nickname “Tough ’Ombres.” He waded past the dead bodies of fellow American soldiers as he approached Utah Beach, and his feet nearly froze in the brutal cold. The numerous war medals he earned include the distinguished Bronze Star.

All of that was nearly 70 years ago, though, when Wells was a very young man. Today, in his twilight years — with the number of World War II veterans continuing to dwindle quickly — Wells admits to being a little sentimental about his Army days. That’s how he became a groupie enamored with Letters From Home, an Andrews Sisters tribute act that performs primarily the songs made famous by the legendary wartime trio of sisters LaVerne, Maxene, and Patty Andrews. He figures he’s seen Letters From Home perform nearly a dozen times since the trio’s beginnings three years ago.

“He’s our biggest fan,” acknowledges Erinn Diaz of Winston-Salem, who organized the group in 2010. “We just love him.”

The truth is, Diaz and her two sisters in harmony — Serah Haley of Winston-Salem and Chelsea de la Cuadra of Durham — love all U.S. military veterans, but the music they perform particularly resonates with veterans from the World War II era.

During a show at Greensboro’s Barn Dinner Theatre, veterans in their 80s and 90s clapped their hands, tapped their feet, and sang along as the trio performed such Andrews Sisters classics as “Pistol Packin’ Mama,” “Near You,” “Don’t Sit Under the Apple Tree (With Anyone Else But Me),” and the sisters’ signature hit, “Boogie Woogie Bugle Boy.” The trio’s stirring, a cappella rendition of “God Bless America” brought a frail veteran in the audience slowly to his feet, setting the precedent for the entire audience to stand and sing along; as the song ended, he wiped a tear from his eye with his left hand and saluted the young women with his right.

“It’s been incredible to see,” Diaz says. “These World War II veterans are not remembering things as well as they used to, but when we sing their music, they’re transported back in time, and they’re 20 years old again. They’ll come up to us after the show and say, ‘Oh, the memories that music brings back — thank you so much!’ Some of them have lost their spouses, and they’ll talk about the memories it brings back. It’s really special.”

That’s what happens to Wells every time he goes to a Letters From Home performance — memories overwhelm him, particularly when the women sing “Sentimental Journey.”

“That was our song,” he says softly, referring to his late wife, Joyce, to whom he was married for 63 years before her death in 2011. “The song was played at a USO dance, and we just claimed it as our song. Every time she heard it, she wanted to get up and dance. I can’t even sing it now — I just cry when I hear it.”

Diaz remembers how the trio’s music affected another World War II veteran during a performance at the Charles George VA Medical Center in Asheville.

“We had finished the show, and we were walking past this veteran in a wheelchair,” she recalls. “He stood up to give us a hug. We didn’t know it at the time, but we learned later that it was the first time he had stood up by himself in over three years.”

When they returned for a Christmas show eight months later, they saw him walking down the hall with his walker.

“Music has a way of stirring those deep, deep memories in a way that a lot of other things can’t. It just shows you how very powerful music can be,” Diaz says.

Diaz created Letters From Home at the urging of her father, Pat Dearth of Winston-Salem, a U.S. Coast Guard veteran who also happens to be a huge fan of the Andrews Sisters. The trio are all in their late 20s, which is roughly the same age as the popular sisters were in their heyday, and they’ve studied films from the 1930s and ’40s to get a sense of how the Andrews Sisters performed. While they consider themselves more of a tribute act than impersonators, they do a great job of capturing the tight three-part harmonies, the lively tap dancing, the playful audience interaction, and the humor the sisters were known for when they entertained troops.

Letters From Home started out performing at mostly retirement facilities, private parties, corporate events, and the like for the first year or so, Diaz says. “Our first bigger gig was the National VFW Convention in 2011 in San Antonio. It was wonderful exposure, and we got to meet so many veterans from all over the country.”

Since then, they’ve been in demand at venues across the United States: theaters, air shows, parades, VA hospitals — even an Alaskan cruise. Media outlets have made a fuss over them. They’ve even recorded a couple of CDs.

The attention has been a bit intoxicating, the three women admit, but they’re quick to deflect it.

“We never expected what we were doing to reach so many people,” Haley says. “It’s just been an amazing adventure honoring these veterans. My grandfather [the late John Vance of Kernersville] served in World War II, and he would’ve loved this. When we’re performing, I see him in so many faces, so I want to do the best I can to honor him.”

De la Cuadra agrees that Letters From Home is not so much about the performers as the people they’re performing for.

“It’s such an inspiration to be around these servicemen,” she says. “We’ll sing the official songs of the various armed forces, and they just stand right up like they’re 20 years old again. Sometimes they have tears in their eyes when they come up to meet us after the show, telling us about their memories. It’s just very special when these strangers all of a sudden feel like they know you.”

To See
Letters from Home will bring their show to The Barn Dinner Theatre in Greensboro for a November 11 Veterans Day performance. For details, visit andrewssisterstribute.com.

Jimmy Tomlin lives in Greensboro and is an award-winning writer for the High Point Enterprise. Tomlin may not be a Letters From Home groupie — yet — but after seeing the trio perform, he’s grateful for the joy the group brings to veterans. His most recent story for Our State was “Reggie’s Flower Shoppe” (August 2013).