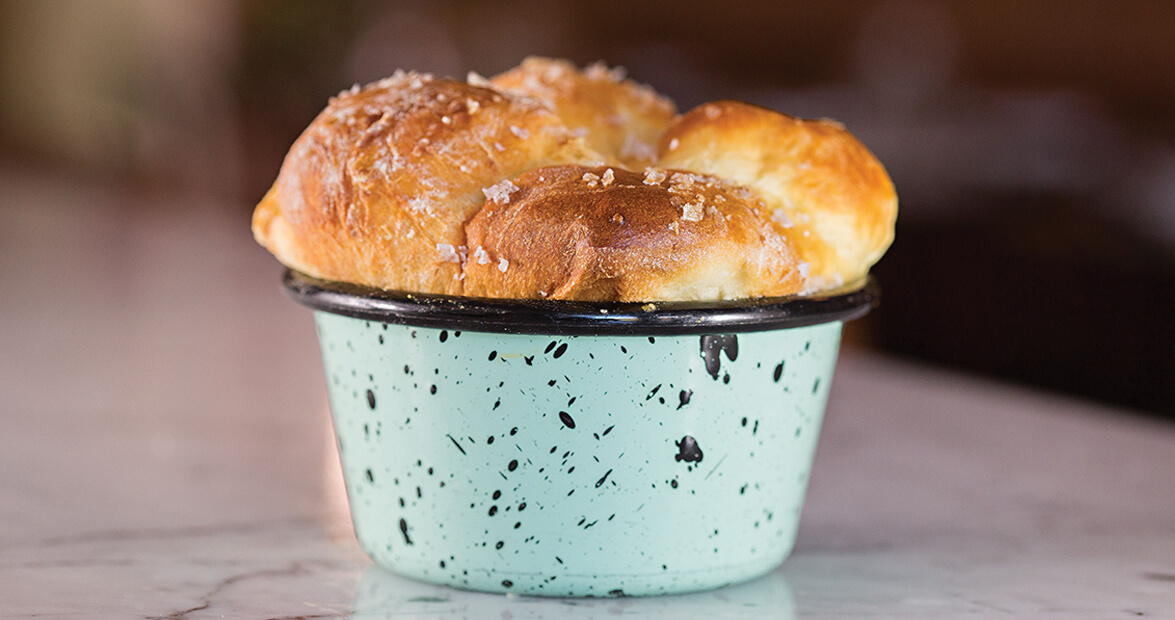 It isn’t often that a restaurant’s bread and butter is its bread and butter. Somehow, bread has become something we eat simply to tide us over until the main course arrives. Well, enough of that. With all due respect to the baguette, the milk bread at Kindred restaurant in Davidson is more than a mere loaf. It’s magic.

Baked in a graniteware bowl and sprinkled with delicate flecks of fleur de sel — hand-harvested sea salt — Kindred’s milk bread is warm and pillowy and sweet and salty and … stop me there (or don’t). Consider it a handshake, or a hug, even, in carbohydrate form. There’s a reason why this stuff arrives at the table even before the glasses of water do.

Since Chef Joe Kindred and his wife, sommelier Katy Kindred, opened their restaurant last year, it’s turned the quiet college town of Davidson into a culinary destination. Artful dishes like squid ink conchiglie and wagyu beef tartare have earned Kindred national recognition. But it’s Kindred’s humble and understated milk bread, served every evening, that greets people at their table. Milk bread has the power to turn even the most bashful taste buds into believers.

Milk bread is a Japanese delicacy. The flour-and-water paste it’s made with, called tangzhong, gives the bread its distinctive airy quality. But the first time Joe tasted milk bread, it reminded him of the down-home Southern yeast rolls he ate as a child living in Davidson. (He used to play in the stairwell of the very Main Street building Kindred now occupies.)

“People might come in here like, ‘What is this? I see all these Italian words on my menu. My servers told me to share with my wife. I don’t see steak on the menu. What’s going on?’” Joe says. 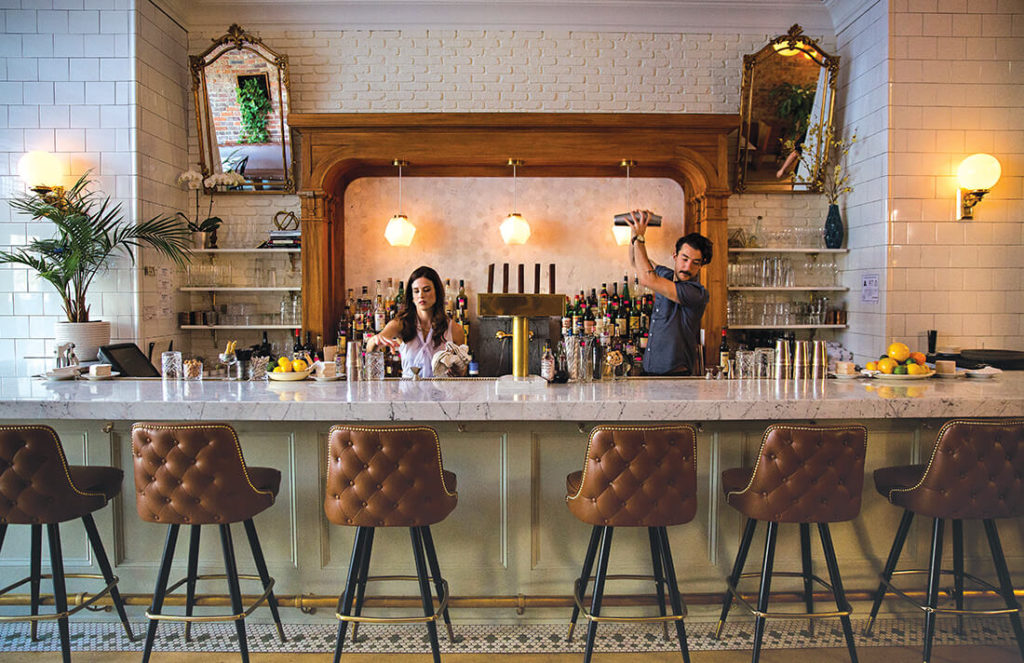 You can still see traces of the pharmacy that once occupied the 1914 building in Kindred’s bar. photograph by Peter Taylor

At Kindred, marble tabletops and shining brass bar fixtures are accented by the soft glow of modern lighting, and the wine cellar against the back wall hints at an upstairs with additional seating. To those unacquainted with the fine dining scene, the place can be a little intimidating.

Bring on the milk bread.

“That’s our way of saying, ‘There’s nothing super fancy about it. Here, try it out,’” he says.

The milk bread’s not the only thing at Kindred with an international flair.

“It’s got a little Southern thing going on, but it’s also got influences from all of these other places,” Katy says of the restaurant’s menu.

All of the accolades pale in comparison to the sense of community they’re fostering through food.

The tongue-twisting words that make up the names and descriptions of dishes are enough to clue guests in. The paccheri pasta boasts spicy ’nduja, a spreadable Italian salami, and earthy kale and black walnut pesto. The squid ink conchiglie is topped with North Carolina shrimp and coated with robust sea urchin butter. These sharing plates might sound intimidating, but their components aren’t at all threatening to the palate — even the sea urchin butter (because come on, y’all, it’s butter).

Many of the ingredients used at Kindred come from the Davidson Farmers’ Market, a two-minute walk from the restaurant. The menu features familiar favorites like buttermilk fried chicken, but pasta’s the thing here. It’s made in-house, with a pasta maker that Joe and Katy brought home from Italy.

Joe and Katy have traveled the world, taking restaurant jobs in the biggest food cities, like San Francisco, to gain experience and draw inspiration for what would later become Kindred — which, by the way, was a decade in the making. 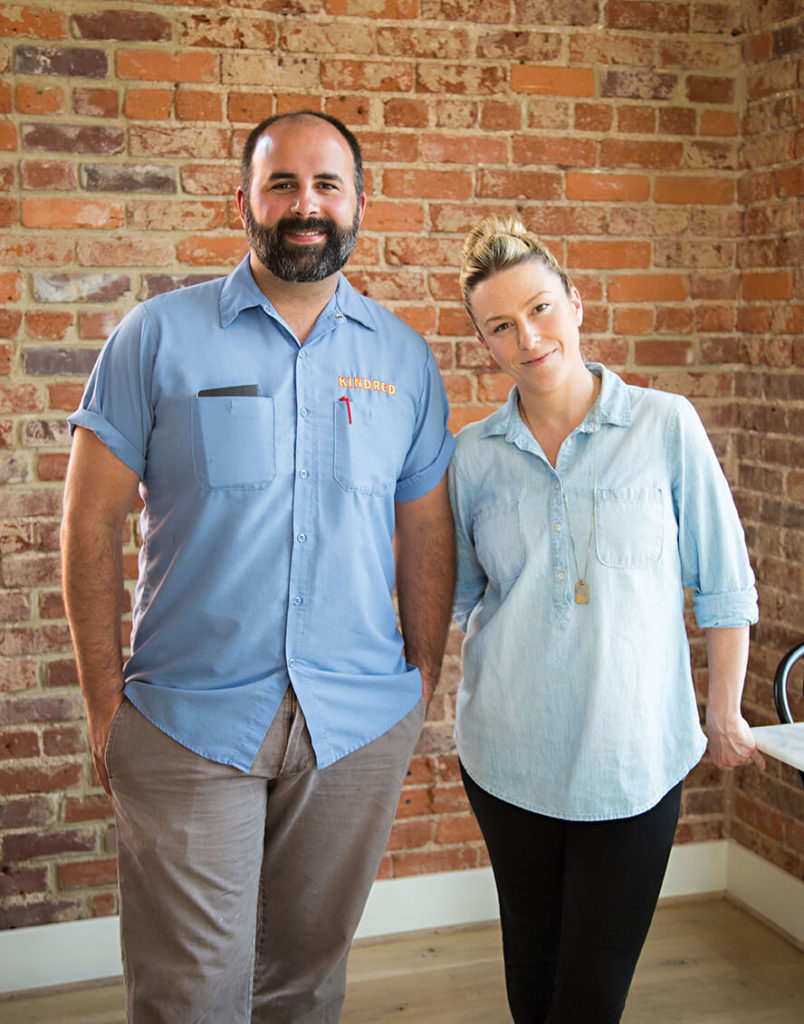 Joe and Katy Kindred worked at restaurants around the world before opening their own place, Kindred, on Main Street in Davidson. photograph by Peter Taylor

“It’s not fair to say we were picking out silverware 10 years ago, or something like that,” Katy says with a laugh. But the first time they ever thought about opening a restaurant called Kindred? “That was honestly 10 years ago.”

On any list of the nation’s best restaurant towns, you expect that the Windy City will garner a mention. The same with New York City. But Davidson? With its population just shy of 12,000? Unlikely.

Joe and Katy thought so, too. Then they learned that they’d earned a spot on Bon Appétit magazine’s list of Best New Restaurants in America in 2015.

“How on earth did they find us? was our first question,” Katy says. “It was not lost on us that we were the tiniest town ever to make that list by, like, a million people.”

And in February, Joe was named a James Beard Award semifinalist for best chef in the Southeast. Yet all of these accolades pale in comparison to the sense of community they’re fostering through food.

To the Kindreds, it’s the simple things that matter most. The couple could’ve opened their restaurant in any number of big cities. Choosing Davidson meant being closer to Joe’s relatives. It just made sense, and it’s fitting, considering “kindred” literally means family.

“It’s about making those connections. That’s what’s important to us. We’re raising our kids a quarter of a mile away from here. That’s our name,” Katy says, nodding to the front window. “This is what we’re doing.”

When first-timers walk into Kindred, they don’t always know what to expect. Wide-eyed, they take their seats and look around while servers, wearing simple, pinstriped aprons over their own clothes, flit around the dining room. Napkins appear on laps. Elbows disappear from tables. But it doesn’t stay that way for long. Hushed tones soon turn into gregarious laughs, and when you look around, you realize: They’ve begun to break bread.