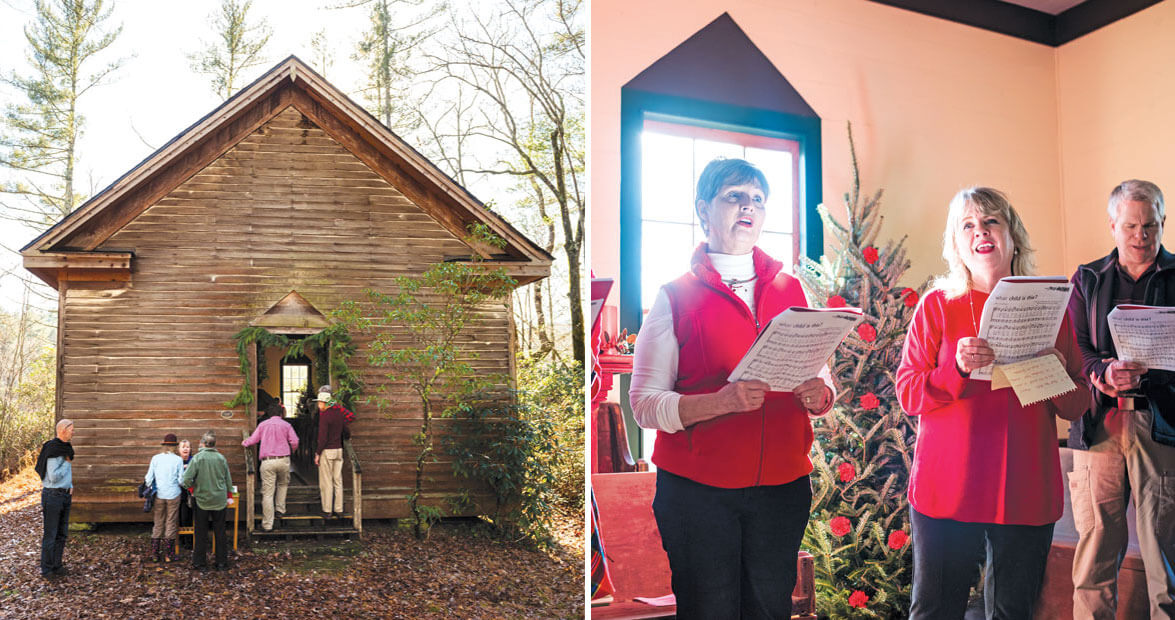 ack then, back when, no one connected the chapel to Christmas at all. “It was Halloween every night,” Charles Burden says. In the 1940s, Burden was a cotton mill boy whose father was a foreman at Piedmont Manufacturing Company, 45 miles away in South Carolina. The mill owned cabins near Brevard, where employees’ families could spend time in the summer. At dusk, teenagers would gather the younger children to visit the abandoned “haunted chapel” a mile down the road. Scared silly by the older children’s hiding and moaning, and the eerie wheezes coming from a decaying pump organ, Burden and his buddies would flee back to camp, down U.S. Highway 276, which was essentially empty due to wartime rationing of gas and tires.

Thing is, that haunted chapel did have a name — McGaha — which you might as well get right from the start: It’s not pronounced McGaha as in the Christmas tune fa-la-la-la-la, but McGaha with a flat “A,” as in Appalachia. Or as G. Keith Parker, who is related by marriage to the original McGaha family, says, “As Eve said to Adam, ‘Adam, if you don’t stop, I’ll throw this apple ’atcha.’” 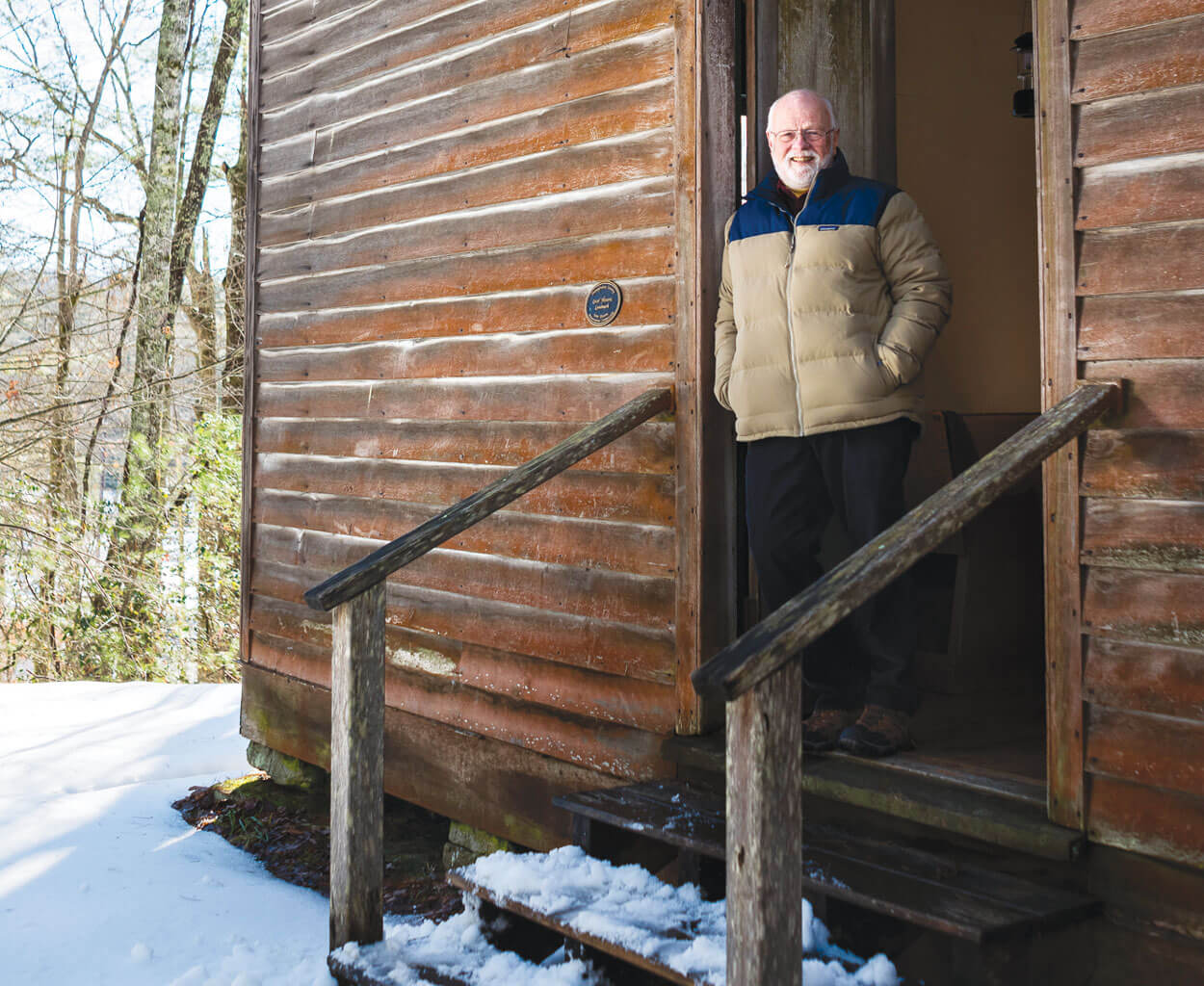 G. Keith Parker, who’s related by marriage to the original McGaha family, bundles up for the caroling event. The restored chapel does not have heat, but the Christmas spirit keeps congregants warm and cozy. photograph by Jack Sorokin

From the outside, you’d never know it’s a chapel. There’s no paved road leading to the small, one-room building, its lines as basic as a box, perched on stacks of fieldstone on a hill in the forest. A double-door entrance, plain windows, four walls, and a peaked roof. No sign, no steeple, no cross. Certainly no parking, because when it was completed, in 1872, people got around on foot or on horseback. Meaning that there’s a faint path, but no actual address, either. Depending on whom you ask, you’ll learn that the chapel is right up from the community of Dunn’s Rock, in Cedar Mountain, outside Brevard, and just off U.S. Highway 276, which was at one time the Johnstone Turnpike, and before that, a Cherokee trading road. When you’ve been around for 147 years, things tend to change.

Way back then, back when, Parker’s ancestors settled alongside those Cherokees in the late 1700s. His kin were survivalists, a term that has nothing to do with stockpiling supplies for an unknown disaster and everything to do with simply surviving. And they never left the area, even when summer folks from nearby South Carolina — Columbia, Charleston, Greenville — began arriving to escape the heat, humidity, and seasonal illnesses of their hometowns. And many people, wherever and however they live, need a place to worship.

Survivalists were too poor and too busy surviving to have slaves, and they often just didn’t like the practice. But the summer folks had households of enslaved workers who moved to the Brevard area along with the gentry. In 1854, when locals tried to persuade the community to build a permanent church for services, rather than holding them in “camps” at one of the existing religious meetings, the idea failed. Limited resources and tensions over slavery, states’ rights, and secession fractured the community and defeated the effort.

During the Civil War, those tensions became true divisions. (Transylvania County was formed in 1861, the same year that North Carolina seceded from the Union.) Neighbors became foes. Twin brothers fought on opposing sides. Bushwhackers — guerrilla forces outside the regular military — wreaked havoc on the rural area. Finally, in 1872, during Reconstruction, the chapel was erected — Parker’s great-grandfather was a trustee — and named the Little River Methodist Episcopal Church. Big name, little chapel.

Inside the chapel, all is as it would have been a century and a half ago.

Back then, back when, the McGaha family saw to the upkeep and maintenance of the building, and their name became attached to the place. Sheriff Bunyan McGaha ferried people to church in his Packard. For 50 years, the chapel thrived, lively with songs and services. But as time passed, preachers on quarter-time — available once a month — were hard to come by. Folks went into Brevard proper for Sunday services at newer churches. The wee chapel in the woods was forgotten to all but the moonshiners, who hid jars of hooch from revenuers beneath the floorboards, and children who spooked each other in the shadows. 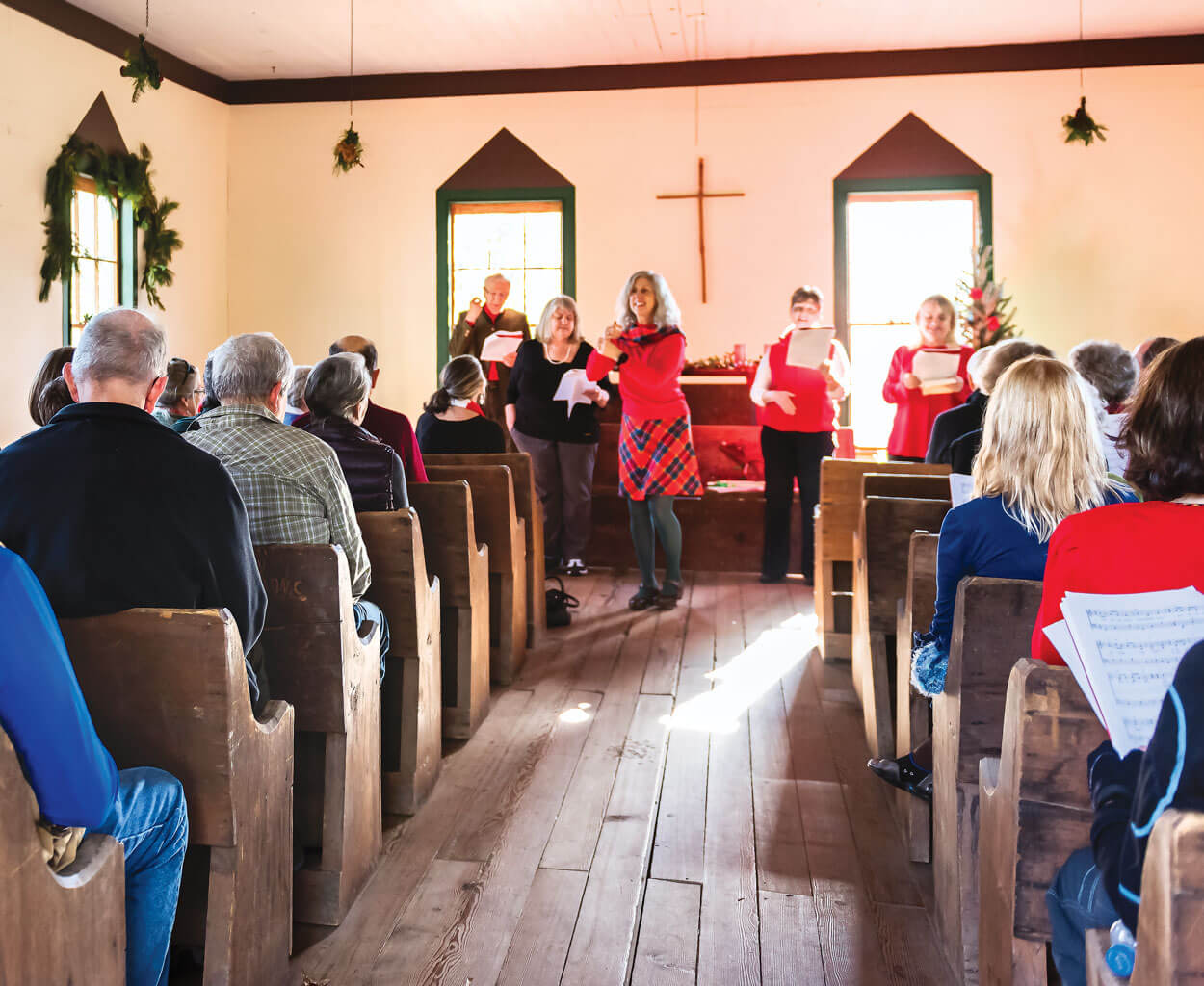 In the early 2000s, Friends of the Chapel raised funds for restoration, hiring a specialist in old buildings. After a chemical analysis of the original interior paint, an equivalent modern blend was created. A chimney that had been tacked on in the 1900s was removed. The roof was repaired. McGaha Chapel was a chapel again, and several members of the community had keys, in case someone asked to tour it. But still, it was just a building, hidden on a hill in the woods.

“Singing seems to bring people together in a divided world.”

The Transylvania Historical Society took over ownership in 2007 to ensure the chapel’s future. Meanwhile, Charles Burden, the cotton mill kid, was all grown up. He and his wife, Elke, owned a home in the Sherwood Forest neighborhood nearly right across the road from the chapel. And while he loved his memories of being gleefully frightened, he’d also loved returning to the mill camp afterward for the simple entertainment of nightly sing-alongs. From Burden’s fond recollections of back then, back when, a new tradition was born: an annual gathering for Christmas caroling at the chapel on a Sunday afternoon in December, with cider and cookies afterward.

This first Sunday in December, at 2:30 p.m., the winter sun sits just over the peak of the chapel’s roof. Burden, now 81, is wearing a traditional Bavarian-style jacket with hunter-green velvet piping and horn buttons — a nod to Elke, who is German — and a bright red turtleneck. He stands beneath the chapel’s lintel, which is adorned with a garland of fir. Arriving carolers cluster around the Historical Society’s guest book, its page charmingly decorated with a single fir sprig. Inside the chapel, all is as it would have been a century and a half ago: no heat, no electricity, perfectly plain. Yet in each of the eight windows, a tiny battery-powered candle glows. Small bundles of berries, pine cones, and greenery dangle from ceiling hooks, and a freshly cut Christmas tree at the front is decorated only with live red carnation blooms. A cross on the wall is simply that: two crossed sticks.

Bundled in coats and mittens and scarves, the singers sit shoulder to shoulder on the 18 single-board pews, hand-sawed from poplar in 1872. Occasional knotholes in the original floor permit a glimpse of the leaf-strewn ground below. But for the printed songbooks, it might be a December Sunday in 1872.

And they sing: from a ruddy-faced, white-haired gentleman in a bow tie; to an 8-year-old; to the four women, standing in front of the chapel’s original mourner’s bench, whom Burden has persuaded to lead the caroling. “Silent Night.” “Deck the Halls.” “The 12 Days of Christmas,” with its vocal and mental workout.

A child asks for “Jingle Bells,” and it’s no surprise when someone with a faint English accent requests “What Child Is This,” sung to the traditional melody of “Greensleeves.” Despite the high-note difficulty, everyone’s game for “O Holy Night.” There’s even a brief appearance from Santa — and something about that bright red turtleneck looks suspiciously familiar.

There are no prayers, no sermon. No instruments accompany the voices, only Burden’s cheery call — “Full of enthusiasm!” — to encourage everyone. As it was for decades at the chapel, the congregation is made up of different denominations. The singers have come from many places — summer homeowners from Michigan and South Carolina, locals from Brevard, retirees transplanted from California. For nearly an hour, they lift their voices. “Singing seems to bring people together in a divided world, never mind degrees of religion or political association,” Burden says.

An era of strife that led to war. An era of Reconstruction that led to restoration. Today’s era of division and polarization. All points in the chapel’s history lead to this moment, right here, right now. In a chapel dressed simply in Christmas cheer, the old songs of glad tidings carry through the chill. If only for an hour, sounds of reconciliation and joy, peace and warmth, ring out once more. Just as they did at McGaha Chapel back then, back when.