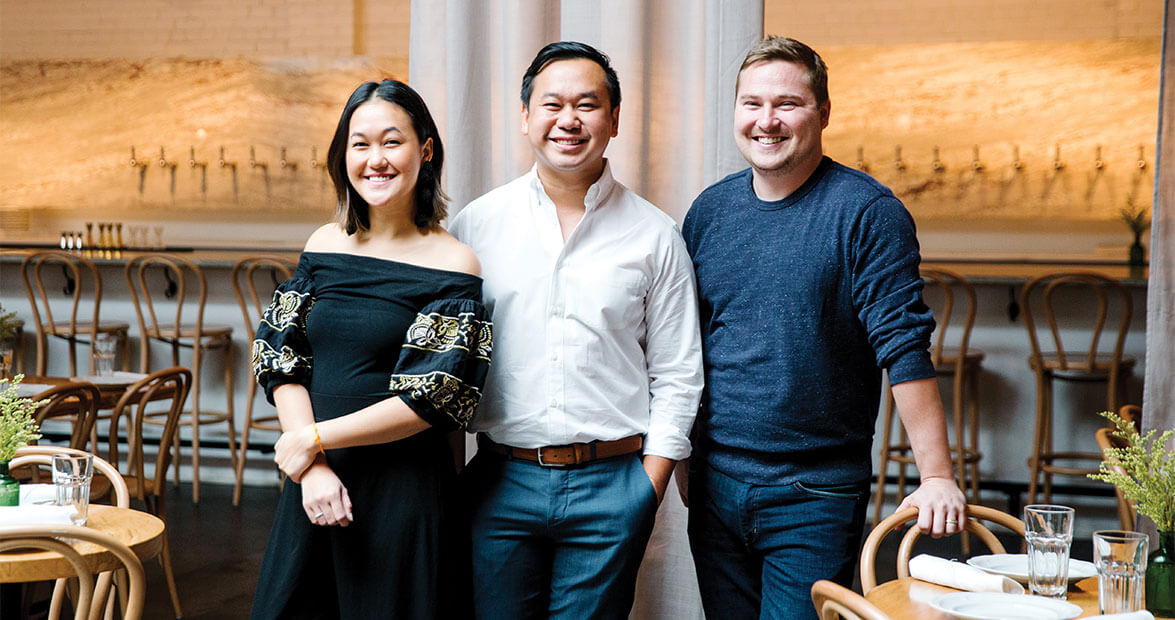 “It was serendipitous,” Patrick Woodson says. “One of those moments when you have no clue how your life has changed. But mine did, as a direct result of pork belly soup.”

Woodson had been in Raleigh with his family for less than a week. He and his wife had just spent two years in Uganda as Peace Corps volunteers, then six months traveling 20 countries. Laos was their favorite — so Woodson’s parents couldn’t wait to tell him about a Laotian restaurant on South Blount Street. “There’s no way,” he said. But there was.

Enter Bida Manda, where Woodson found that pork belly soup — and met brother-and-sister co-owners Vansana and Vanvisa Nolintha. Soon, the three were friends. Now, they are business partners, co-owners of one of the boldest ventures our state has seen: Brewery Bhavana, a 9,000-square-foot restaurant, flower shop, taproom, and bookstore. A few months after opening, Bon Appétit magazine named it one of the best new restaurants in the country.

“Before Patrick, we thought about opening something else,” Vanvisa says. “But this was meant to be.” The three, it turned out, lived in the same neighborhood, and Woodson shared his home-brewed beer with the Nolinthas. They spent Sundays together, talking about the possibility of a brewery, about community and hospitality, with this friend and that friend and — “Everything snowballed from there,” Woodson says.

A concept began to bloom. Or, not.

“Bhavana was never a concept,” Vansana says. “It’s an extension of relationships. When you zoom into each component, you begin to discover” — he pauses, waiting for the right word — “fingerprints.” 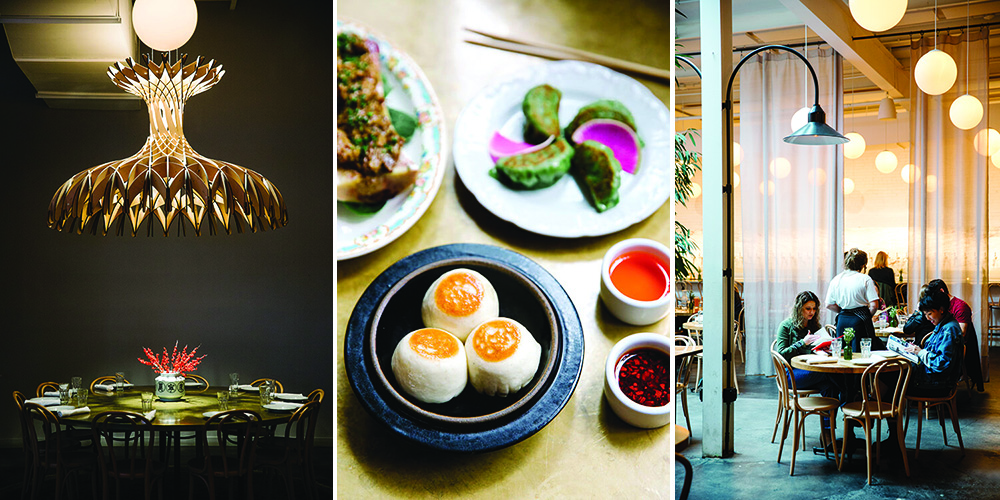 From left: The lotus — here, in the form of a chandelier — is a symbol of the restaurant. Plates of pork bao and edamame-and-ginger dumplings are served in Havana’s sunny dining room. photograph by Anna Routh Barzin

Chun Shi was in graduate school, studying for finals, when a fellow Chinese student asked for a favor: scallion pancakes.

Shi was pursuing a master’s degree in computer science at George Washington University, but she also loved to cook. “So I made her scallion pancakes … such a simple food, but it made her so happy,” Shi says. “It’s a memory of home.”

For Shi, that’s Shanghai. She immigrated to the States in 1999, and, eventually, she and her husband moved to North Carolina for his job. He told her, “If you find another computer job, you’ll probably never do anything else. You love cooking, so why don’t you try that?”

Shi abandoned keyboards for cleavers and enrolled at Johnson & Wales. After graduating, she interned at Ãn, an Asian restaurant in Cary, where she stayed for almost a decade, working her way up every single station to become sous chef.

Her cultural understanding of dim sum cuisine is what caught Vansana’s attention, years ago, when he connected with Ãn’s executive chef: “He said, if he would ever let Chef Chun go, it would be for us,” Vansana says. “It was a joke.”

Or foreshadowing: Now, Shi leads the kitchen at Bhavana, alongside Executive Chef Lon Bounsanga, who holds the same role at Bida Manda. They serve more than a dozen types of dim sum, like char siu bao, pai gu spareribs, and scallion pancakes. For each, they prepare more than 500 pieces per day. Which totals, give or take, 7,000 dim sum — little dumplings that make a lot of people happy and remind Shi of home.

Deana Nguyen holds a pair of pruning shears, snip-snip-snipping a bunch of smoke bush leaves. She sets them in a stout glass vase, then stops.

“I listen to how the stems want to sit,” she says.

Before flowers, Nguyen studied everything from painting and ceramics to loom-weaving and jewelry-making. But none of those stuck.

Nguyen was an early hire at Bida Manda. When she was at a crossroads and considering her own shop, the Nolinthas encouraged her to grow. Vansana connected her with Jaclyn K. Nesbitt, a floral designer in Napa, California, with whom Nguyen then apprenticed. She returned with Nesbitt’s artistic approach — emphasizing design elements, eschewing expectations.

“I don’t think there are rules,” Nguyen says as she gathers dahlias and zinnias, lisianthuses and gomphrenas.

She holds a zinnia at arm’s length, spins it ’round and ’round, then snips. She adds a lisianthus. Takes it out. Puts it back. Spins the vase on a marble turntable. Steps back. Stares, squints, tilts her head. “I think I’m almost done,” she says.

Like the flowers, Nguyen wants her arrangements to feel alive. Imperfect, asymmetrical, all over the place — like sculptures. While some florists strive for traditional structure, Nguyen embraces individuality. As she sets the arrangement out for sale, the flowers stretch, slouch, sigh — reaching past their vessel, as if toward you, as you pass them by. 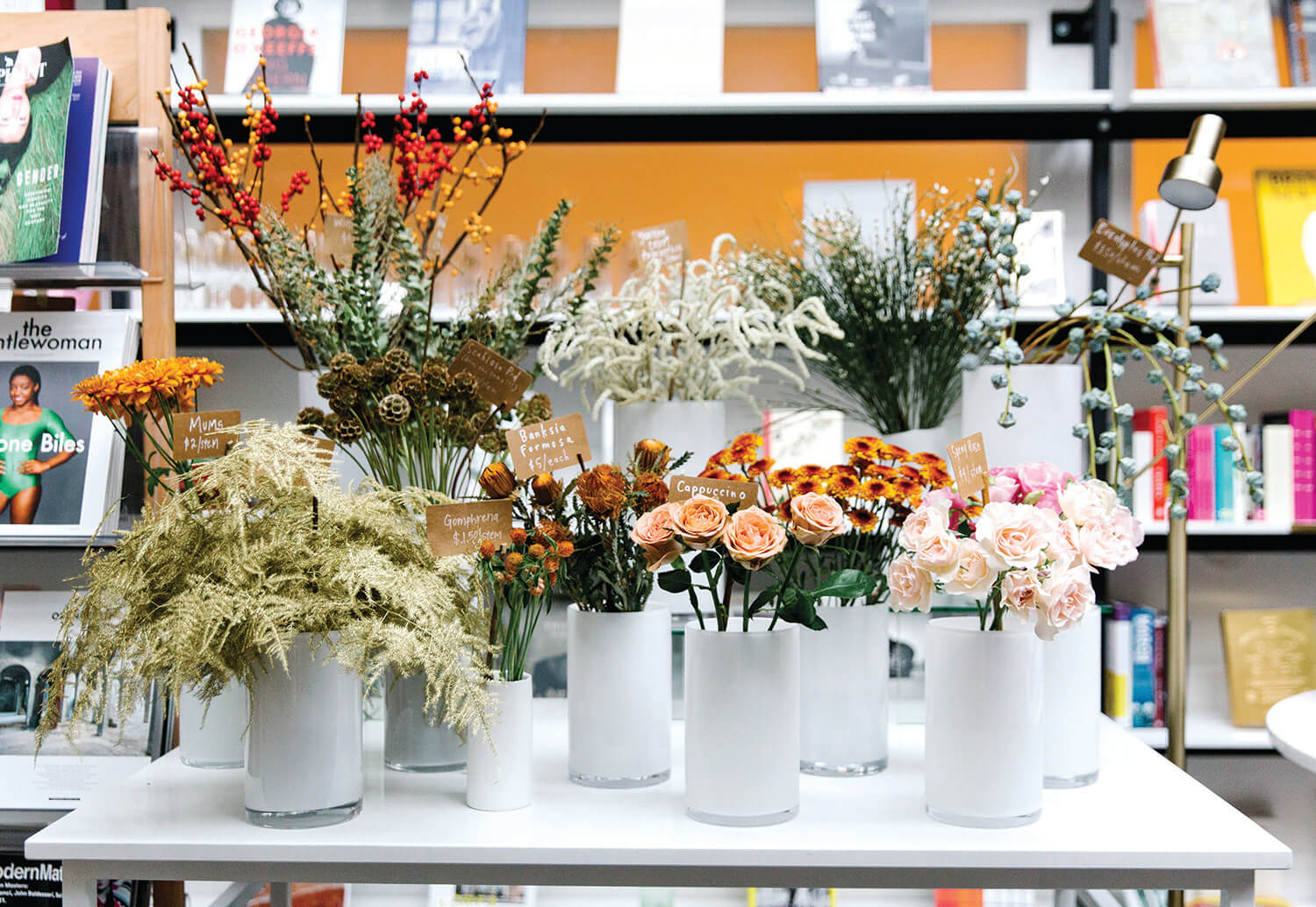 “The bookstore was tricky,” Vansana says, “because we didn’t know what it should say.” But Monica Jon did.

“We have always been inspired by who she is, her aesthetic, her taste, her ability to curate,” Vansana says. “We had a pop-up flower shop a couple years ago, hosted by me, Deana, and Monica, and it was like — oh my God — the person we’ve been looking for has always been here.”

Jon specialized in film studies at NC State and planned to pursue graduate school. But then, Bhavana.

“I wanted to be part of something like this,” she says. “It’s rare to have a bookstore that’s so small, but open enough to curate whatever you want. You aren’t limited.”

Indeed, the bookstore stock is as singular as its location within a restaurant. An oversize skylight splashes sunshine onto the little collection, which rotates almost as regularly as the plants.

“Having one to two copies of each book allows us to keep bringing in new items, or old classics that you wouldn’t expect to see,” Jon says. Think everything from The Feminist Avant-Garde to Goodnight Moon.

A colleague, Laura White, helped Jon get the bookstore — and library — set up. The latter is a community-sourced compilation for guests to enjoy while they sip beer and slurp soup dumplings. Before Bhavana opened, they asked hundreds of people to contribute a few favorite books. The return: more than 4,000.

“When you don’t have the steel tanks to say, This is a brewery, it asks a lot of important questions,” Woodson says. “Like, what is a brewery?”

The answer, for Woodson — who serves as head brewer alongside his counterpart Brent Steffen — has as much to do with hops and yeast as it does with wine barrels and mango trees in Uganda.

Woodson learned home brewing from his dad, then went on to study fermentation engineering in graduate school: biofuel by day, beer-making by night. “Beer won out,” he says, “because it tastes a lot better.”

But what, exactly, beer tastes like is where Woodson starts to “play with people’s palates.” The Roselle, for instance, takes flavors that most associate with rosé — hibiscus, grapefruit zest — and incorporates those ingredients into a blushing beer. Other times, Woodson is just chasing a memory. He spent more than four years recipe testing Magnifera — until he could open a bottle, close his eyes, and be standing in Uganda with his wife, smelling mango trees.

In this way, beer is Woodson’s medium — to experience, express, experiment — just as books are for Jon, flowers for Nguyen, dumplings for Shi.

“Before we opened, it would have been so easy for people to think, What are they doing? Why do these four things go together?” Woodson says. “And they don’t.”