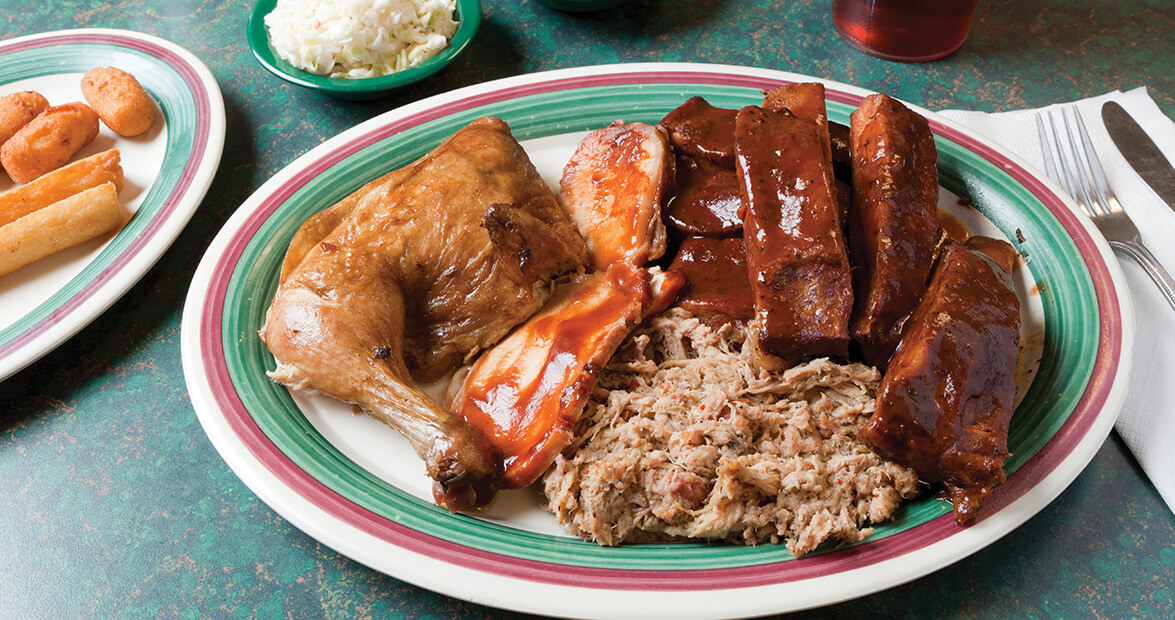 Jeff Swofford converted to low-and-slow cooking in 2002. Before that time, he turned out rapid-fire burgers and fries for the Hardee’s fast food chain. He and his family once owned 37 Hardee’s restaurants in North Carolina and West Virginia.

But that was then. Today he owns Brushy Mountain Smokehouse and Creamery in North Wilkesboro, where he uses one of the world’s slowest cooking methods to deliver succulent barbecue. He doesn’t regret the change for an instant.

Now he cooks sauced St. Louis-style ribs for three hours, and works Boston butts over hickory wood in a Southern Pride smoker for 14 and a half hours.

Located in western North Carolina, Brushy Mountain adopts an ecumenical attitude when it comes to barbecue. The eastern part of the state inspires Brushy’s barbecue sauce. Dominated by vinegar, the house-made sauce has only a hint of sweetness.

One element of that style is care.

“We hand-pull all our pork,” Jeff says. “It doesn’t touch a blade.”

Not only do Jeff and his coworkers look across the state for inspiration, but also they’ve also created an appetizer that combines a South-of-the-border staple with North Carolina meat and sauce: the Barbecue Cruncher. It consists of hickory-smoked pork butt stuffed inside a flour tortilla and deep-fried, with vinegary barbecue sauce on the side.

In the tradition-bound business of barbecue, Jeff Swofford is an innovator.

For another menu item, he looks east again — to Holden Beach, where the Swofford family vacations. There, Jeff got the idea to start serving shrimp burgers, adding them to the menu in late 2012.

“Our shrimp burgers are loaded with Calabash shrimp,” he says, sitting at a table some 290 miles west of the coast.

Among the restaurant’s side dish choices is more geographical diversity: a mayonnaise-bound slaw akin to those found in East Tennessee alongside a tart red barbecue slaw of Piedmont lineage.

Sweeter than the tea

Although the worlds of fast food and barbecue are different, at Brushy Mountain, there is one common bond: ice cream. The Swofford family was the first to serve Hershey’s ice cream in a Hardee’s. The pairing of barbecue and ice cream has been a trademark of Brushy Mountain from the start.

Just inside the front door, there’s a rainbow-colored case of house-made ice cream. Jeff, his son Paul, and his cousin Todd once considered putting the barbecue cooker in that spot. Jeff says he put the ice cream case there instead because he likes the aroma of fresh-made waffle cones.

With different flavors revolving in and out — 18 to 20 flavors at one time — the case is an eye-pleasing color palette that tastes even better than it looks. Consider Brushy Mountain’s mud pie, a blend of chocolate, coffee flavor, Oreos, and chocolate chips; or bestsellers, like red velvet and coconut.

Jennifer Foster makes them all. Her ice cream repertoire is always expanding. When a customer suggests a new flavor, you can find her concocting a recipe for it. If the flavor is adopted, that customer receives one quart for free.

But ask Jeff Swofford what he’s most proud of at his restaurant and he skips right over the knockout ribs and the divine ice cream. “Family,” he answers, with not even a pause between the question and his answer.

“All the servers, they’ve been here seven years or more,” Jeff says. “I’ve watched a ton of kids who worked here graduate from high school.”

The Swoffords themselves are a well-known family in North Carolina. Jeff’s uncle, John, is commissioner of the Atlantic Coast Conference. The late William Oliver Swofford, “Bill” to his family “Oliver” to the world, made a hit record in 1969 that sold one million copies.

A copy of that record, “Good Morning Starshine,” hangs on a wall at the restaurant alongside pictures that reflect the history of Wilkes County.

Altogether, it seems everything at Brushy Mountain, including the decor, is a product of time and thought. Nowhere is that more evident than in a plate of slow-cooked ribs and hand-pulled barbecue. That is, until you taste the ice cream.