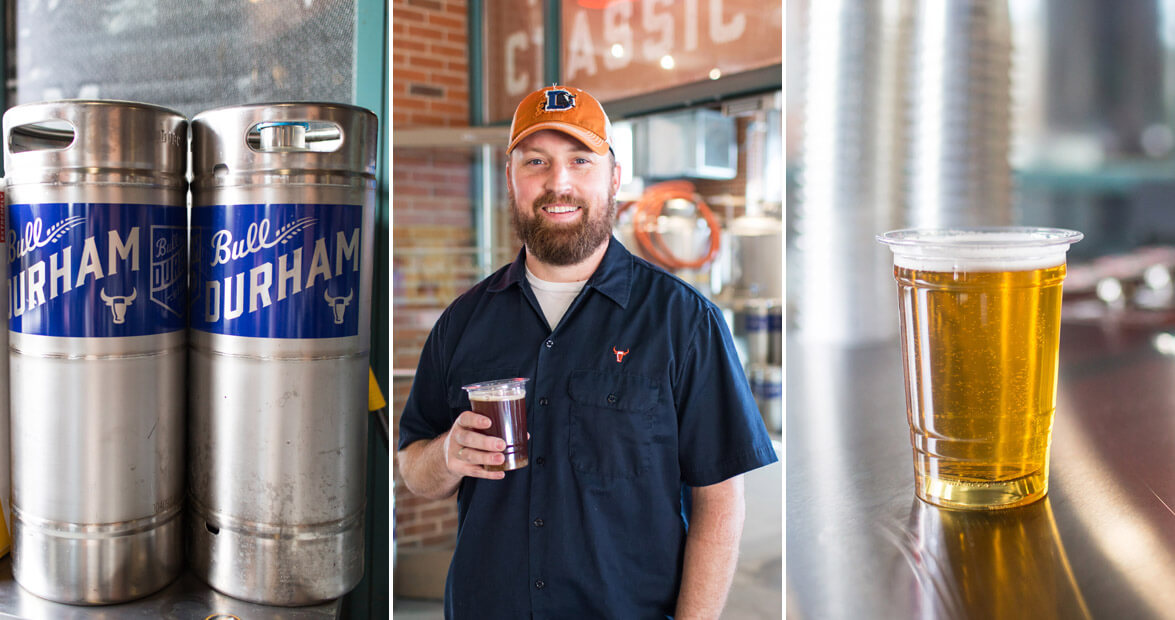 Baseball’s greatest virtue is the time that it takes. Every precise pitch and calculated swing of the bat, unrushed and not ruled by seconds on a scoreboard, are what make baseball beautiful.

The beverage that tastes best with baseball isn’t something to be hurried, either. Beer takes hours to brew, weeks to ferment. But when we gulp it down, we can’t fully appreciate how it’s made and where it came from. We’ve got nine innings, so why not savor it?

Beer and baseball are a natural pairing, so it only seems fitting that every stadium across the country would have its own brewery. You’d think that, anyway, especially as we’ve become better acquainted with what’s in our pint glass over the past decade — but it wasn’t until last year that the Durham Bulls Athletic Park in the heart of downtown Durham became the first minor league baseball stadium in the country to have its own microbrewery. This brewery joined the four others in Durham: Bull City Burger and Brewery, Fullsteam, Ponysaurus, and Triangle Brewing Company, with two more in the pipeline to open in the coming months.

Bull Durham Beer Company is the brainchild of Sebastian Wolfrum. He figured that the beer-friendly city of Durham could use a stadium brewery, especially since the ballpark already featured a variety of North Carolina pours. 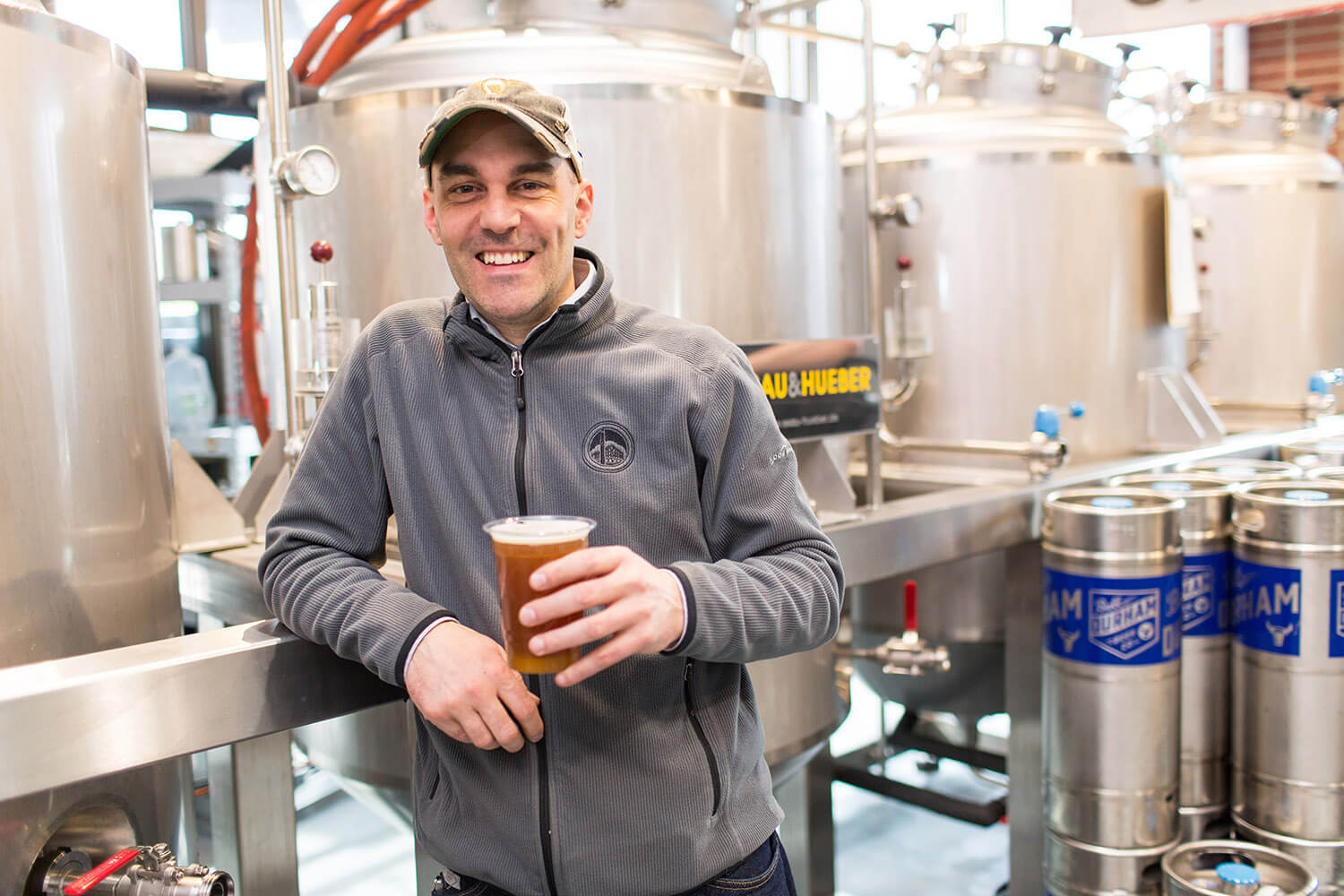 But there were a few logistical matters to consider. The space where the brewery is situated required some finessing to fit the large kettle system required. The resulting brewery has the ability to crank out 15 barrels of beer each week when operating in full force.

The brewery sits on prime real estate in the stadium, just above the main entrance and in full view. While conventional breweries might see a steady trickle of beer drinkers throughout the day, curious game goers often pour into Bull Durham Beer Company all at once — before the first pitch, between innings, during rain delays. They pop their heads in for an impromptu tour of the place and line up to buy a beer at the serving station just outside of the brewery’s doors.

“People walk by, and they’ll see our station out there. They’ll ask, ‘Where are y’all from? Where does your beer come from?’” says Garrett Eder, assistant brewer. “I’ll just knock on the window and say, ‘Right here.’” 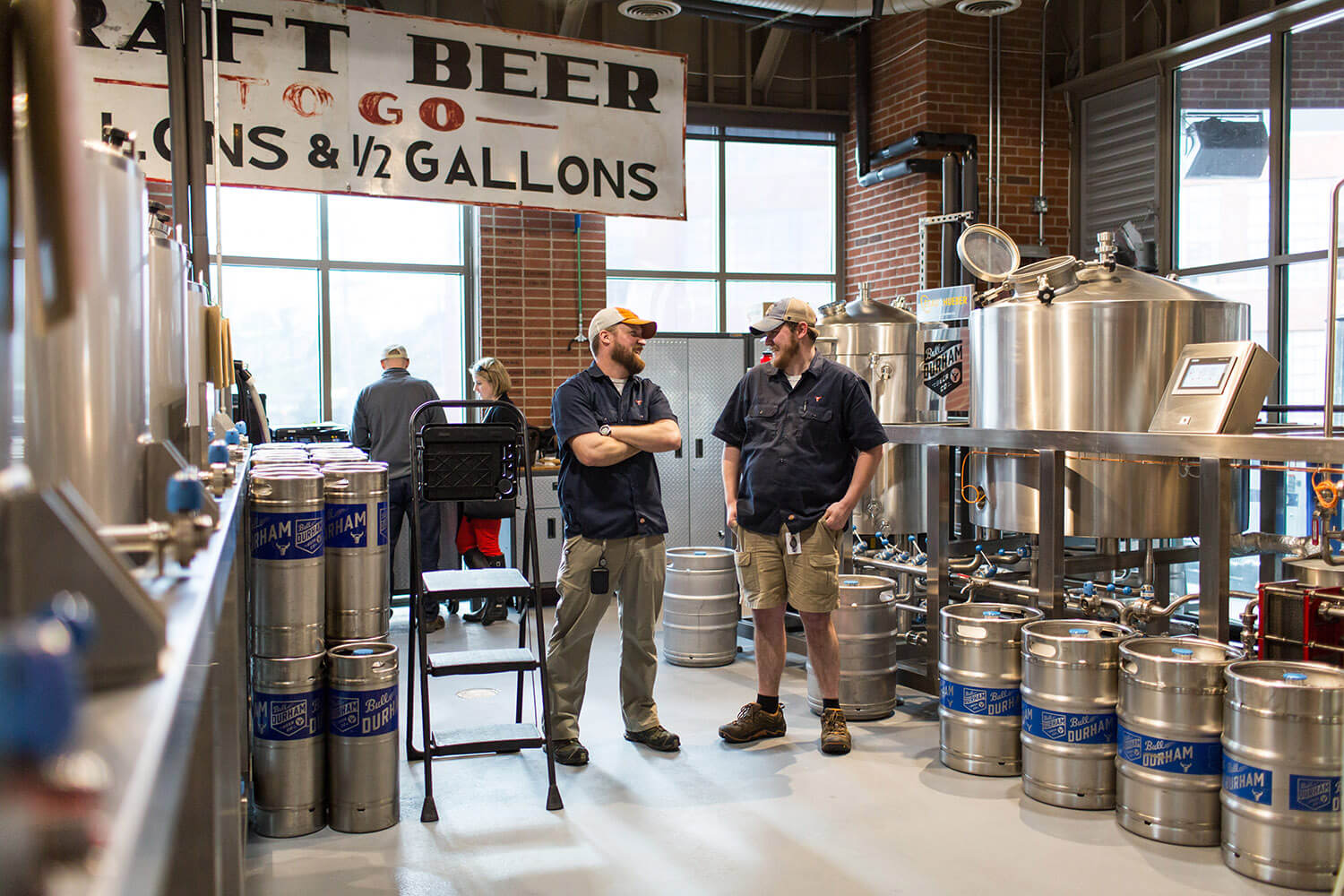 A lot of folks can’t believe it. Some have never even stepped foot inside of a brewery before. Wolfrum sees it as an opportunity to sing the praises of locally-made beer.

“There are a lot of first timers who never knew how beer is made or that it takes more than a day,” Wolfrum says. “For the five minutes that people spend in here, we get a snapshot of their attention.”

The easy-drinking brews that Bull Durham creates have the power to make fans out of most beer drinkers. 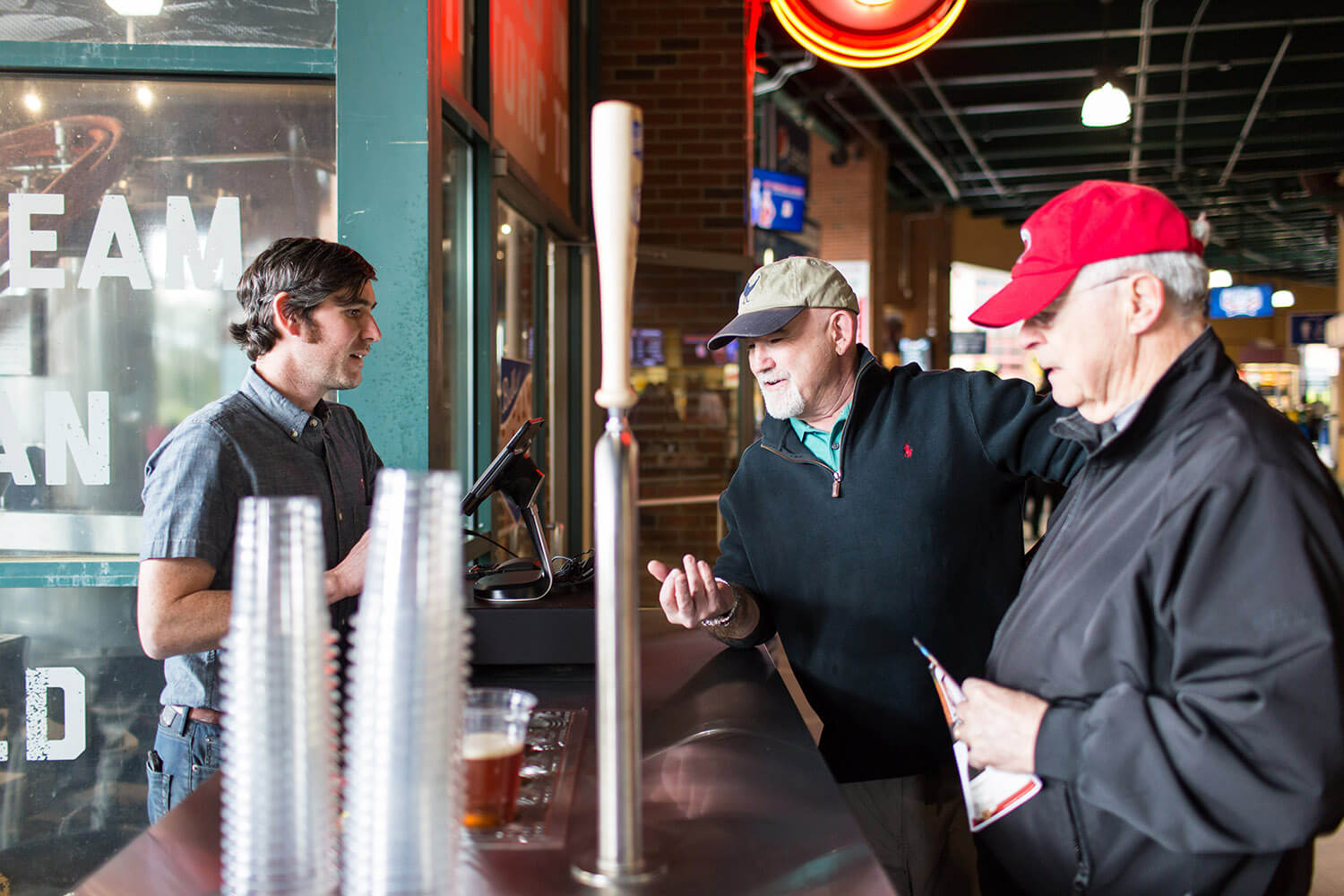 During its first season in 2015, Bull Durham only produced two beers: the crisp Lollygagger Kolsch and the balanced Water Tower Wheat. This year, the brewery has a stacked lineup as it adds an IPA and an amber lager to the roster. Both are robust, yet brewed with approachability in mind. “They’re not big and bold and overpowering,” Wolfrum says. “You sip along as you watch the game.”

When ball’s being played, Bull Durham keeps it simple with beers that quench summer’s thirst. Come offseason, Wolfrum and his team like to concoct new flavors and work with various bars and restaurants in Durham and beyond. It used to be that you could only drink Bull Durham beer from your ballpark seat, but now the beer is on tap at the likes of nearby tapas bar Mateo, among others reaching beyond Durham’s borders. This summer, Bull Durham will open its own taproom adjacent to the stadium, an opportune place to unwind any night of the week. 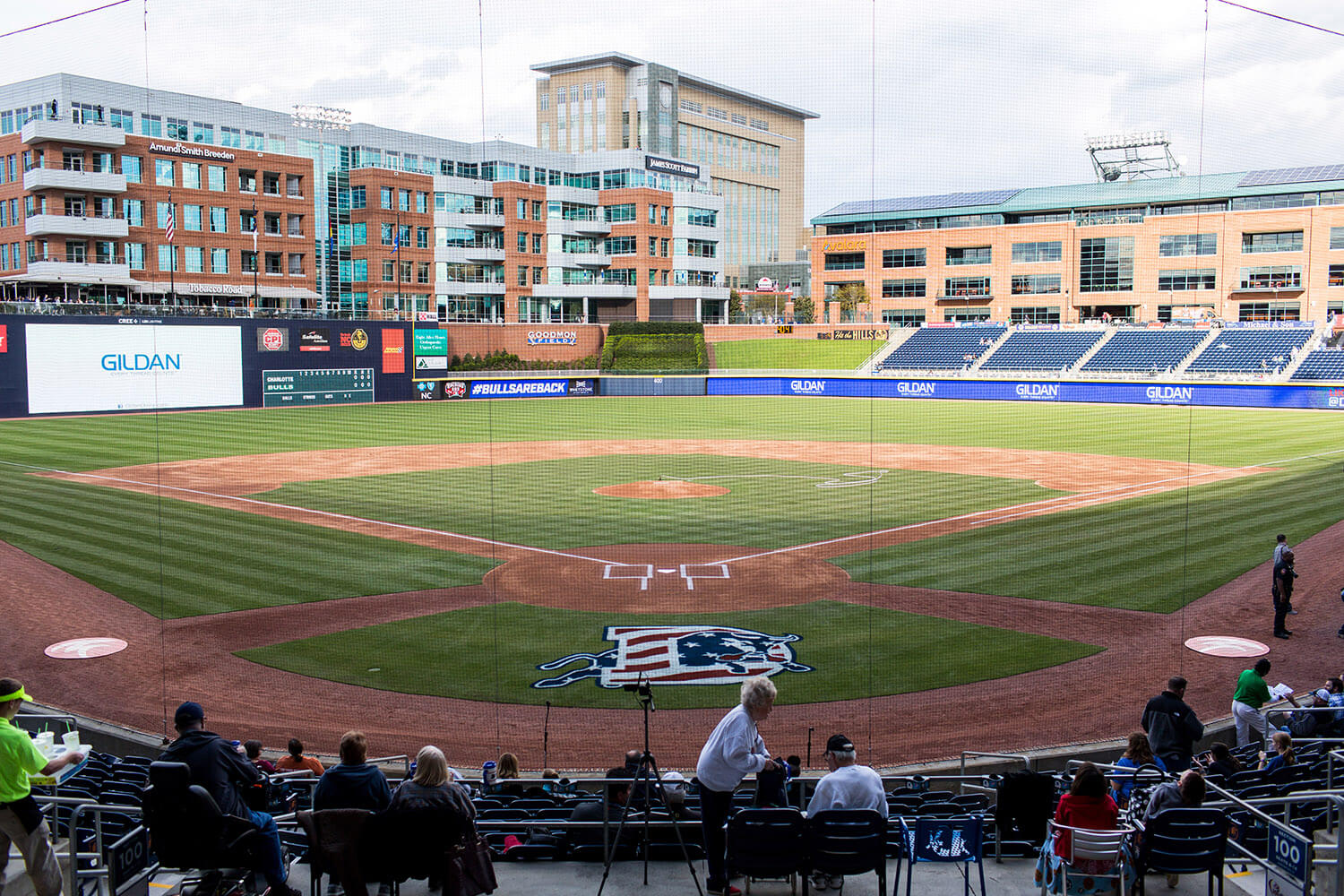 In the hopes of becoming more sustainable, the brewery is now experimenting with its own hop yard at Sassafras Fork Farm, just north of the city in Durham County. It’s pretty neat, considering Wolfrum also happens to own a Durham-based malt company.

“Hopefully, we’ll have a beer at some point in time that’ll [include] local hops and grain,” head brewer Tate Little says. “Not many people can say they have a beer that does both of those things.”

Homegrown flavor, like a home-team win, is worth celebrating.