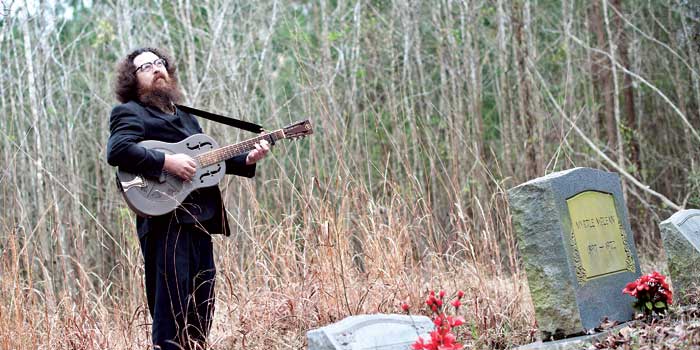 Bullfrog Willard McGhee can spot history with ease. Pulling up a chair in Raleigh’s Berkeley Cafe, he eyes the mural of blues musicians painted on the back wall. He frowns and strokes his beard.

“I may not know all of ’em,” he says. Then he rattles off almost all their names.

“That’s Elmore James — Tennessee guy, his big song was ‘Dust My Broom.’ Next to him is Blind Boy Fuller, Durham’s own; Albert King; the Rev. Gary Davis, another local legend; Mississippi Fred McDowell; Skip James; that jazz band looks like one of Louis Armstrong’s Hot Five with Bessie Smith. That woman and those white guys, I’m not sure,” he says, laughing.

McGhee is one of the great characters of modern-day North Carolina Piedmont blues, which he played long before Hurricane Katrina drove him here from New Orleans, Louisiana, in 2005. At 40, he has grown into the nickname he’s had since age 11, when a kid on the school bus in West Virginia said, “You’re so ugly you look like a bullfrog.” The name stuck.

McGhee played guitar, wrote songs, and learned everything he could about the blues. His mother, a “chronic mover,” toted him all over the country during his early years, arriving in Chicago, Illinois, when McGhee was a teenager. He looked up blues players in the phone book — Johnny Shines and Honeyboy Edwards.

“They treated me well and let me come visit,” he says. “If the old white guys had been half as decent to me, I’d probably be a fast-picking bluegrass guy now.”

McGhee got a history degree from West Virginia University then moved to New Orleans, where he drove a cab and played every gig he could.

McGhee’s deep yowl was an effective instrument for singing the likes of Fats Waller. But it still wasn’t a perfect fit. When he moved to North Carolina, he found the right spot.

“I fit better musically here,” McGhee says. “The living tradition of guys playing in the old style — there’s a lot more of it here.”

McGhee plunged into the local scene in Raleigh, developing musical friendships with contemporaries, including Tad Walters, his most frequent recording partner. He sought out John Dee Holeman, Boo Hanks, and other local elders to swap songs and stories. And he did a lot of “tombstone tourism,” immersing himself in the area’s blues history by tracking down local landmarks.

In Chapel Hill, McGhee found the railroad bed at the end of the street where the teenage Elizabeth Cotten wrote the blues standard “Freight Train” nearly a century earlier. In Orange County, he discovered the graves of Richard and Willie Trice, who played with Blind Boy Fuller. And in Durham, he unearthed the place where the Rev. Gary Davis used to live with Sonny Terry — a church parking lot.

“I’ve been to an awful lot of vacant lots around here that used to be something,” he says.

Eventually, McGhee’s wanderings took him to Sanford and the overgrown cemetery where Chapel Hill bluesman Floyd Council is buried. Council is best known for his name, which provided half the moniker of the English psychedelic-rock band Pink Floyd (South Carolina bluesman Pink Anderson is the other half). But Council died poor, in 1976, and he was buried in an unmarked grave.

McGhee decided Council deserved better. He teamed up with his recording partner, Walters, and other blues locals to record Pink & Mr. Floyd (Tadfrog Records), a very fine tribute album of Council and Anderson songs that closes with a rendition of “See That My Grave Is Kept Clean.” Bullfrog will use the album’s profits to clear out the grave site and erect a monument.

He wants to finish the monument within a year. But until then, he’ll keep singing and searching for the graves and stomping grounds of other Piedmont blues musicians, ensuring they’re not forgotten.

David Menconi is the music critic for The News & Observer in Raleigh. David’s most recent story for Our State was “A Musical Revolution” (March 2012).