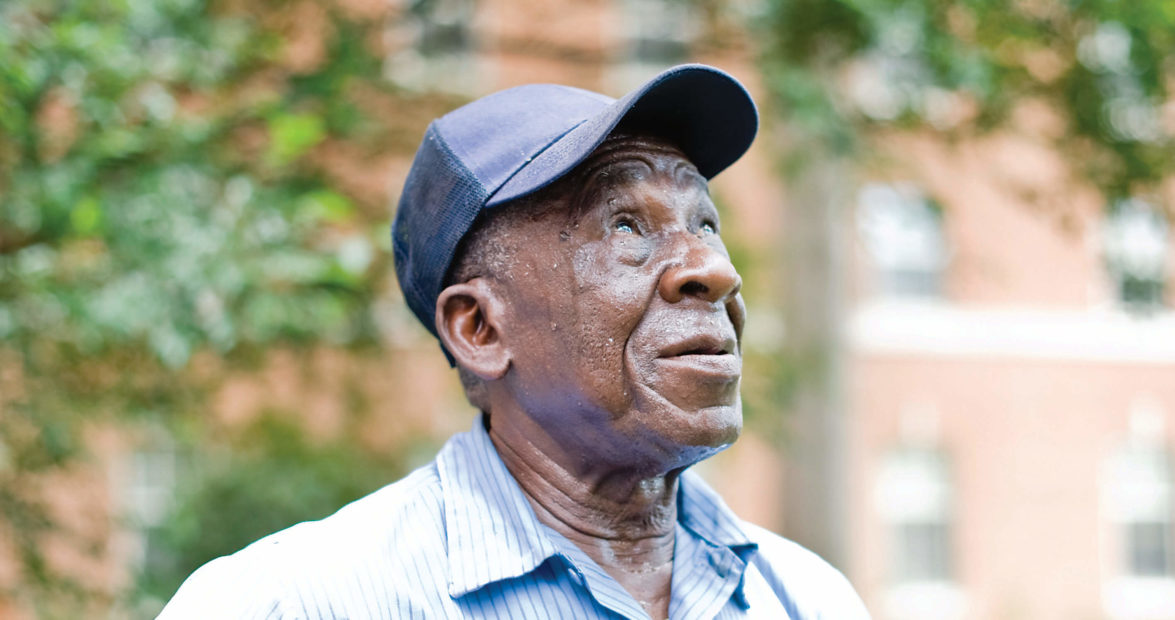 EDITOR’S NOTE: This story was originally published in September 2010.

Although much of the University of North Carolina at Chapel Hill campus seems to be perpetually under construction, it never seems to lack for trees. There are some areas of true arboreal serenity, and even in the less-covered spaces where students and faculty walk, there are trees and shrubs that can provide insulation. Walking through this setting, I meet William “Bus” Hubbard, a man who is part surgeon and part artist, a man who creates beauty by cutting away what is ugly, a man who is largely responsible for creating and maintaining the green splendor of the campus.

Hubbard is sort of an institution within the institution here. He’s been the grounds department’s resident Tree Surgeon — he cares for the trees — since the 1950s. Just a few months before Hurricane Hazel hit North Carolina, the young man from Chatham County was working for a construction company building the hospital in Chapel Hill when he made a career switch that would last a lifetime.

“I got tired of trying to push a loaded wheelbarrow up a board, and I heard about a job opening in the grounds department at the school. I got the job the same day I applied for it,” he recalls.

A half-century later, every time I talk to Hubbard, one phrase keeps coming to his tongue: “I love my job.”

“What has kept you here all these years?” I ask him.

“I love my job. I like coming to work every morning. I like the people I work with. I like cuttin’ trees. I get a lot of satisfaction out of what I do. I just enjoy it.”

Riding in the truck

Hubbard sits down in one of the grounds-keeping buildings on campus. It’s a cloudy day, and the grounds crew is about finished. He sits in an old metal chair, his body erect but comfortable. Although it’s not a particularly cold day, he wears a denim jacket. There are flecks of sawdust on the jacket, residue from his labors. Hubbard trims trees, you know.

Hubbard grew up on a farm in Chatham County, but soon realized that farming was not something he wanted to do for the rest of his life. He and I share a love of the land and some of the travails that go with it. We talk about hauling fertilizer in 200-pound bags, about cropping tobacco in the hot sun, and about how hard it was to make a living farming.

An old aphorism comes to mind: “Farming is a great life if you’ve got another way to make a living.”

That’s kind of why Hubbard came to Chapel Hill. Initially, he continued to live with his family and commuted.

“Back then, the school would let somebody drive one of the trucks home, and all of us that worked down that way would ride back and forth to work on that truck,” he says. Later he moved to Durham, where he lives now. He provides his own transportation these days.

“One reason they let us ride the truck was ’cause, on 25 cents an hour, we couldn’t afford to get to work any other way,” he says, laughing.

Hubbard is in good shape physically, particularly for a man 76 years old. After all those years of climbing trees, I wondered how he had avoided disabling injuries. I figured all that climbing and exercise helped.

“Well, exercise helps, but my first supervisor, Mr. Dunsmore, was a good teacher,” Hubbard says. “He taught me how to climb and to rig my ropes so I wouldn’t fall. He told me I had to trust myself and my ropes.

“When he started teaching me, he’d go up on the tree with me to help build my confidence. He’d pick a tree where nobody would see me if I made a mistake. Took the pressure off me. I learned by doing. I wasn’t afraid after I learned to trust my ropes.”

Hubbard still uses the rope riggings today to prune the trees and says, “Definitely don’t use any spikes to climb a tree. Worst thing you can do.

“We got more machinery now,” he continues. “When I first come, we just used all hand tools. When we had to rake leaves, it was done by hand, and we’d rake the leaves into a sheet. Lifted it by hand and hauled it away by hand. It was hard work, and you had to keep up. The older fellows would leave you behind if you didn’t keep up.”

And when the storms came, it was still manual labor that cleaned up the wreckage. “When the trees got blowed down, I’d be the one to saw ’em up. We’d have a crew of usually three men. Sometimes we’d have to work around the clock, sleep in the shop a few hours, then get back at it. Everybody worked after a storm. When it snowed we had to clear every walk before we could go home. There’s a lot of walks on this campus.”

Rules for getting along

Listening to Hubbard reminisce about his years at UNC made me wonder how he was able to maintain such a career. I asked him what advice he would give to a young man who wanted to follow in his footsteps. He came up with what I call Bus’s Rules for Getting Along:

“Never make a man mad. If the folks you work with get stirred up, leave ’em alone till things get right.”

“Don’t stop work to talk with the boss man when he comes around. If he asked you something, answer him. Otherwise, keep on working.”

“Know what you’re doing, and learn to do it the best you can.”

“If you don’t like what you’re doing, go find something else ’cause you won’t do a good job, and that’s not fair.”

“Always respect the other man’s job. Even if you can do it, it’s his job.”

On my last visit with Hubbard, we meet at the William and Ida Friday Center for Continuing Education, in a relatively new part of the UNC campus. The parking lot is divided by rows of beautiful trees whose gold and green leaves contrast with the gray of the concrete around them. It’s almost lunchtime, so Hubbard and the crew are cleaning up before eating.

As the other men load limbs that had been trimmed earlier, I see Hubbard walking toward one of the small trees at the corner of the parking lot. He walks easily, comfortable with the small chain saw. With one easy motion, he starts the saw and immediately begins to trim some of the lower limbs of the tree. In just a few minutes, he completes his task.

I say, “Bus, how did you know which limbs to cut off?”

“You gotta know what you want it to look like,” he says. “Then you cut away everything else.”

For Hubbard, it’s that simple: Come up with a vision, and then take a chain saw to it.