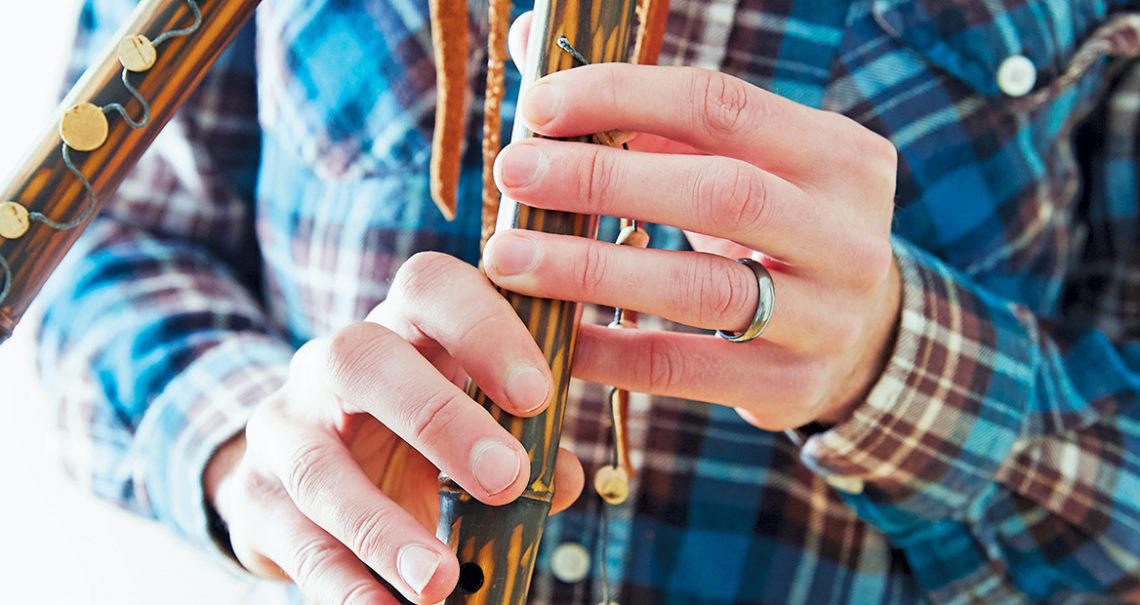 Caleb Byerly opens the door to his backyard storage shed, on the outskirts of High Point, and flips on the overhead fluorescent lights to reveal a cramped but orderly workshop. Saws, chisels, and hammers hang neatly on the pegboard walls; shelves are lined with bottles of epoxy and jars of shellac, bits, and other materials; and in the corners stand racks of raw wood and bamboo. The air smells of sawdust. Leaning against his bench in the center of the space, sitting in a pile of shavings, is a slender, four-foot-tall piece of mahogany carved down to something resembling an elongated lute.

Byerly sets down his morning coffee and lifts the unfinished instrument to his ear. A lithe man in his mid-30s, blond hair thinning atop his head, he closes his eyes and blocks out the summer cicadas outside. He taps the base of the piece with a callused finger. The wood answers back in a soft tone. It still needs work. Byerly continues chipping away at the instrument, shaping it, and all the while he pages through his memory, recalling how the sound changes, how the two strings he’ll attach will reverberate against the body. He imagines this hunk of wood sounds about right. 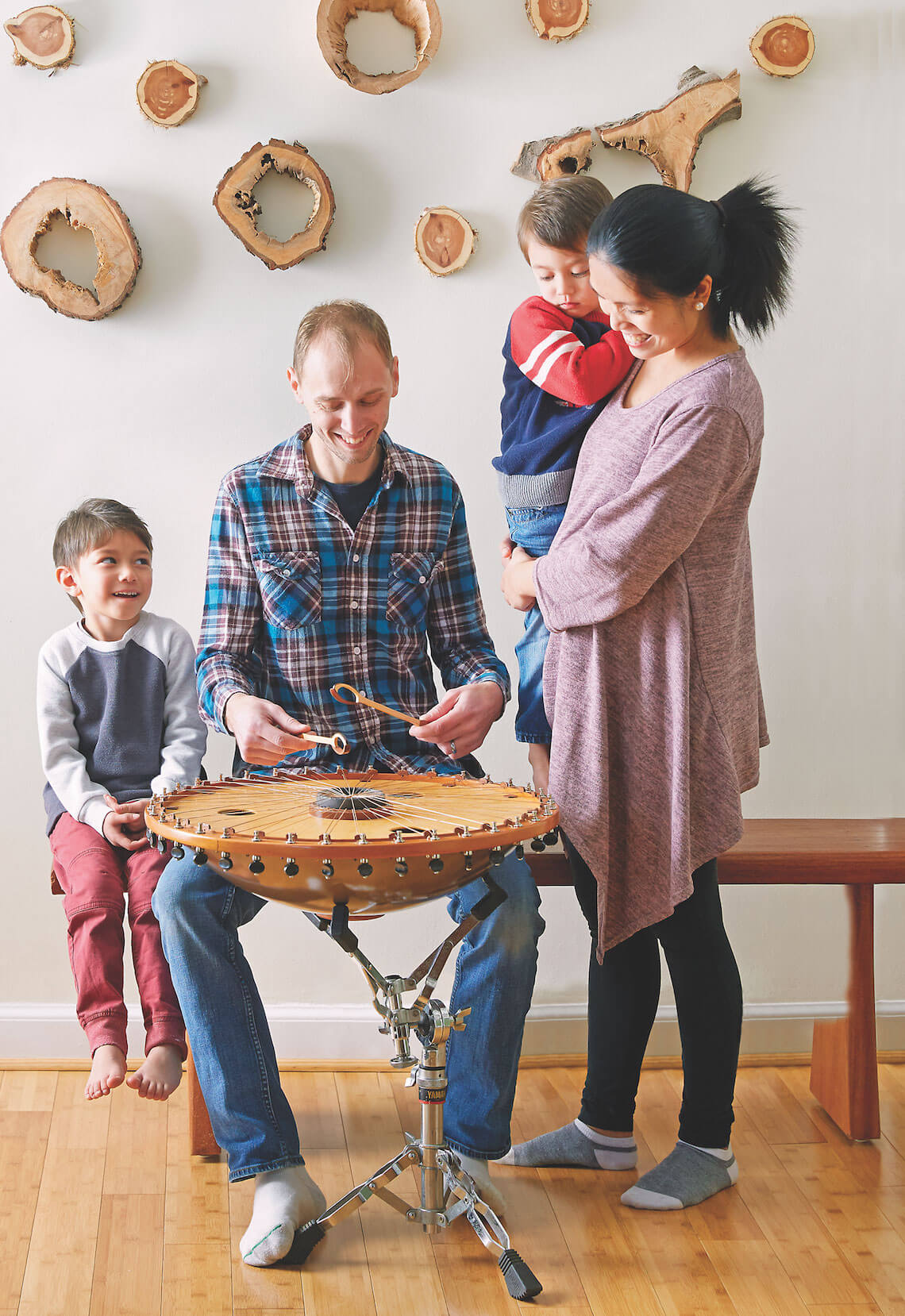 A mission trip to the Philippines inspired Byerly to make traditional instruments, like this salimbaa. His wife, Gladys, and their children are treated to music that hasn’t been heard for generations. photograph by Stacey Van Berkel

He can only imagine, though. He’s built several of these instruments, called kudlongs, over the past decade. But they were all modeled after his first, a prototype that was largely a guess based on his own research as a Christian missionary in the remote jungles of the Philippines.

In 2009, Byerly was working in the mountains with an isolated indigenous tribe called the Tigwahanon Manobo, who he noticed didn’t have any musical instruments besides Western guitars. Byerly, an avid musician, asked where their own traditional instruments were. The elders explained that those musical tools, used largely to worship their ancestral gods, had been abandoned when they converted to Christianity after being visited by white missionaries — outsiders like him. Touched by their loss and stricken with vicarious guilt, Byerly felt compelled to make things right. “I felt that since I was from the West and a Christian missionary, it was partially my responsibility to fix this problem,” he says.

The village elders helped Byerly by sharing their childhood memories, and Byerly studied passages of a Western explorer’s 1800s journal that described Manobo music and instruments in detail. He and the local makers set up shop, gathering wood and crafting tools, and eventually they emerged with their best facsimile of a kudlong. The first time the instrument was played, parents and children danced and sang. Some of the elders wept. “One elderly woman came to me in tears, saying that this was a sound that she hadn’t heard since her childhood,” Byerly says. “I was honored to be a part of that moment.”

“One elderly woman came to me in tears, saying this was a sound she hadn’t heard since childhood.”

Inspired by his experience, Byerly returned to North Carolina and founded Evergreen Missions, an organization that seeks to help indigenous peoples reclaim their musical birthrights and traditions that have been lost to time. In his tiny backyard shed, among the Carolina pines, Byerly handcrafts a symphony of ancient sounds from all over the world.

Behind him, balanced on a peg while its latest coat of shellac dries, is a Scandinavian bukkehorn, used to scare predators away from flocks of sheep or goats — this one was made from the mangled black horn of a water buffalo instead of the traditional billy goat’s horn. Beside that is a five-hole gemshorn fashioned from a polished ram’s horn to simulate the ocarina-like instrument that was used in what is now Germany, Hungary, and Italy until sometime in the late 16th century. In the corner is a seven-string kinnor, a traditional instrument of the ancient Israelites, that Byerly is repairing for a customer. Above it hang two Native American-style flutes hewn from dried bamboo.

Byerly says he “redeems” these instruments, by which he means, in part, that he rescues these artifacts by recreating them. He also aims to help communities reconnect with their heritage by bringing back something that was stolen from them, whether by time, by shifting cultures, or, as with the kudlong, by other people.

Byerly supports his family and Evergreen’s overseas instrument projects by selling these handmade reproductions to collectors, musicians, and other people hoping to get in tune with a part of their cultural heritage. Lately he’s been busy, so much so that he’s had to divide his time and energy among several projects at once. “I like to juggle,” he says. “If I just stick with one thing, I don’t let it flow like it should.”

He sets down the Filipino lute and moves on to a project that feels right for the moment: “We’ll come back to you, kudlong.”

In the process of helping other people reclaim their lost culture, Byerly has also claimed his own Carolina birthright. His native High Point — called the “Home Furnishings Capital of the World” — has been a center for woodworking ever since European settlers began crafting furniture here, among the vast hardwood forests, in the 18th century. By the turn of the 20th century, the area’s more than 40 factories were supplying much of the South with home furnishings.

Even though mass production has scaled down in these parts, the tradition of craftsmanship remains strong. Woodshops in garages, basements, and backyards are as commonplace in High Point as driveway basketball goals. Byerly learned hand-planing and dovetail joints from his father, who learned from his. When Byerly started his own family, he bought his grandfather’s house, the same squat brick ranch where he currently lives, and inherited the workshop shed out back.

Byerly also picked up a love of music through his family — he remembers the towering stacks of vinyl records in his grandfather’s house, everything from bluegrass to jazz. But none of his relatives were necessarily accomplished musicians. Byerly developed his musical abilities through church, as a means of worship and a way to use his voice to express his love for God.

“He was always a tremendous guitar player and drummer,” says Marshall Petty, a 40-year woodworker from Greensboro, who went to church with Byerly and later became a member of the Evergreen Missions board of directors. As a missionary, Byerly discovered that the connection between music and spirituality crosses all cultures. While working in the Philippines, he found his life’s calling — the point where his woodworking, musicianship, and religion all intersect. (It’s also where he met his future wife, Gladys.) But the learning curve to combine all these interests was steep. He knew, for instance, how to play a guitar, and he knew how to build a chair. But he didn’t really know how to build a guitar. He leaned on his community back in High Point, including Petty, who makes 18th-century reproduction furniture, to hone his craft for the delicate work of instrument making. Villagers helped Byerly collect tools and usable materials around their settlements. They all worked together to make the instruments as authentic as possible, and then to teach others how to build them, too. 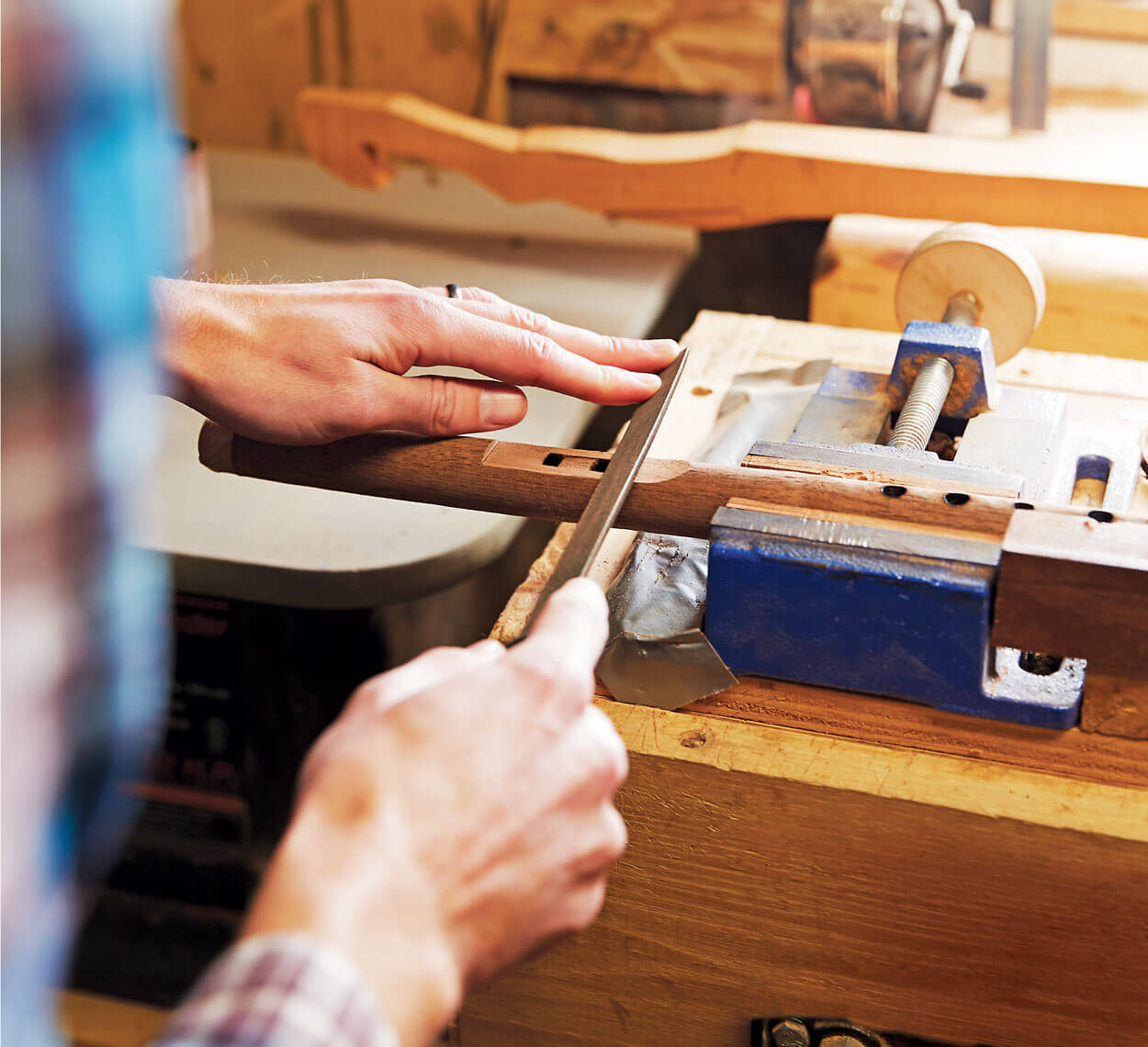 In his workshop, Byerly shapes the mouthpiece of a Native American-style flute made of walnut wood. photograph by Stacey Van Berkel

“We had to make the tools to make the instruments,” Byerly says. “But before that, we had to make tools to make those tools.” At first, it would take six months, including his research into the details of the sound and appearance of each instrument. When it was time to start building them, Byerly and the locals took long journeys into the jungle, camping on the mountainside and hunting for food at night. By the end of these journeys, they had redeemed not only the kudlong but also a number of drums, shakers, flutes, and knocking blocks to accompany the lute.

When they returned to the village and played for people, the true power of what they had accomplished hit Byerly like a second baptism. “There was a sound released over the land that had not been heard for more than 60 years,” he recalls. “It wasn’t only a sound — it was their sound. It spoke to their identity and who they were created to be.”

“It wasn’t only a sound — it was their sound. It spoke to their identity.”

In the decade since, Byerly and his fellow Evergreen missionaries have made many return trips to the Philippines. They’ve built other instruments for other tribes, including the 30-string, bowl-shaped salimbaa, which had been taken from the Tinananon tribe by its enemies more than a century ago. And they’ve set up workshops for locals to practice making and learning to play their ancestral instruments. But it’s the shared experience of craftsmanship, of creating something good and true together, that’s almost as powerful as the music itself.

Back in the shop, Byerly has set the unfinished kudlong aside and has pulled down one of the Native American-style flutes. The design is fairly simple, at least compared to the kudlong or the salimbaa — just a simple pipe, little more than a foot long, with six finger holes, tapering off to a mouthpiece at the top. It’s a generalized model, a sort of amalgamation of similar instruments from various Native American tribes. But this particular instrument is very North Carolina because it resembles the flutes that are believed to have been played by the Cherokee and other tribes in this area long ago, and also because of the way it’s made.

Byerly harvested the bamboo for the instrument, with permission, from a neighbor’s property, and he dried it in his own backyard. Then he cut it and sanded it down. Now, at his workbench with his dust mask on, he’s drilling the holes. He picks up a chisel next and begins carving a mountain scene inspired by the western Piedmont, complete with a river colored with flakes of North Carolina emerald. For the final touch, before everything is set beneath a finishing coat of shellac, the artist signs the flute with the chisel: Caleb Byerly ’19.

He removes his dust mask and examines his work from all sides, proud of the artistry. Bringing the flute to his lips, he improvises a tune to test it out, something he feels in the moment. And if you close your eyes and listen to the high tones of the woodwind over the drone of cicadas, played in loose time to the rustling pines, you can almost transport your mind to another era, centuries ago, when this land, that sound, and the person who originally made it were last in harmony. Then, you open your eyes to see a modern-day woodworker, a musician, a believer, completely at home in this place and time.