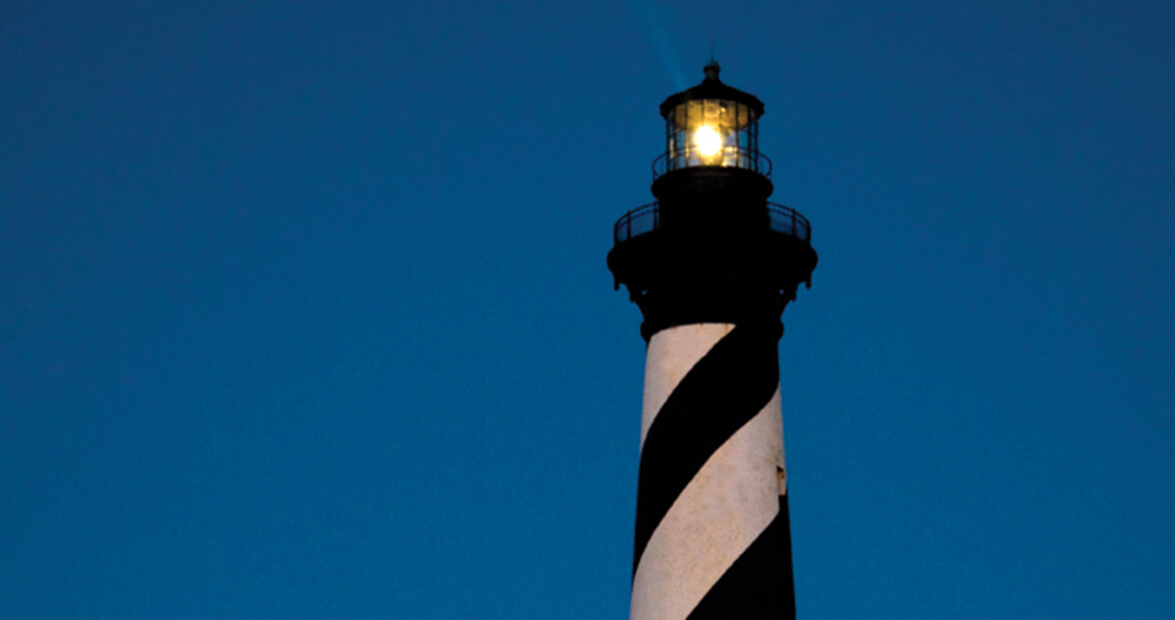 Once a month, under the full moon, Cape Hatteras Lighthouse keepers invite visitors to be mischievous. They sneak people in after hours. Trespassers must bring their own flashlights. I have mine with me as I drive into the park. Night cannot disguise the twisted shapes of trees stunted by salty winds.

I pull into the park and go past the nature trails, until I finally see the light. The beacon that guided thousands of ships through dangerous shoals is not exactly a comforting sight. It glares into the car with wince-inducing intensity, and I flinch as if caught by a patrolman in some place I shouldn’t be.

The wave of rebellious excitement grows as I enter the deserted parking lot. Only two groups of 30 are smuggled in each evening during these Full Moon Tours. The few stealthy shadows I follow to the lighthouse speak in low tones as if they, too, savor the sensation of breaking rules. We pass a sign that notes park hours are 9 a.m. to 6 p.m. Our rendezvous is set for 8:15 p.m.

Cape Hatteras Lighthouse no longer has actual keepers. It’s managed by the United States Coast Guard and the National Park Service. Park rangers and volunteers lead the tours, and, as they ask us about our vacations, I hear French and Russian accents as well as distinctly local tones. Several area families are present and plan to sneak in with me.

A national historic landmark, the lighthouse is the tallest in the United States, standing 210 feet. In the late 1800s, every one of those feet mattered to mariners sailing the “Graveyard of the Atlantic.” Ocean currents near the Outer Banks provide great sailing except off Cape Hatteras, where the warm Gulf Stream meets the cool Labrador Current. Storms and giant swells confounded sailors’ efforts to navigate the coastline’s shifting sandbars, known as the Diamond Shoals. Hundreds of shipwrecks rest in these sands, sunken testament to the necessity of a Hatteras light.

The first lighthouse was completed in 1803, destroyed in 1860, and was, essentially, a disaster from start to finish. Sand-colored, only 112 feet above sea level, poorly maintained, and dimly lit, it was of virtually no use to passing vessels. The second and current lighthouse was first exhibited December 16, 1871.

While of tremendous aid to mariners, this Cape Hatteras Lighthouse has a difficult history. Surf tore at the land until it finally reached the tower in 1935. The lighthouse was supplanted by a skeleton steel framework. Public works programs restored the shore so that by 1942 the U.S. Coast Guard, on the lookout for German U-boats, was stationed safely in the unlit tower.

The lighthouse was lit again in January 1950, but erosion continued. The Visitor Center exhibits a fascinating map highlighting how the entire island has shifted south since the late 1800s. The land simply disappeared from beneath the tower. In 1999, the National Park Service arranged for the lighthouse to be moved inland. All 210 feet of it, including every one of the 269 steps. Twelve stories, which I now climb in the dark.

The light flashes overhead in a straight beam that seems to reach out to its range of 24 nautical miles. I hear the faint scuff of the light turning every 7.5 seconds and ocean waves on the shore.

We enter the tower, and I smell the salt. It seeps from the red bricks, which have been sponges for the damp breeze for more than 100 years. They have withstood the weight of thousands of storms and tens of thousands of visitors. I avoid the handrail and trail my fingers along the bricks as I climb.

The ascent has a universal effect — hearts beat harder, breathing grows quicker. Everyone gets a little hot and sweaty. Couples get to feel anew that first spark that brought them together. Children get to feel naughty, exploring a place they’re not supposed to be.

At the top, the rush of emotions stills. The shush of the ocean waves mixing with the hum of the rotating lens soothes visitors. The moonlight
glimmers on the water. I am privileged to experience this eventide moment — the same way keepers might have felt on calm nights.

But my light is not powered by whale oil or kerosene, like those from the 1800s. It’s an aviation-type, rotating beacon of brightest white, and, when it flashes, an optical illusion cuts it short, so it looks like a hand held out to restrain the sea. Defiant, like me and all these people who have come here after hours.

This time I, not a patrolman, wield the flashlight. Walking down, down, down the spiral stairs is like falling in love, wobbly kneed and dizzy. I am not surprised to learn that several engagements have occurred here.

Cape Hatteras Lighthouse is one of those landmarks like the Empire State Building and the Golden Gate Bridge that every dedicated tourist must see. But for those who would prefer a less tourist-y visit with a bit of off-limits zing, the Full Moon Tour is the answer.

Special night climbing tours are offered during the summer months. Ticket sales for the full moon night climbs may be reserved online beginning three days before the tour via recreation.gov.