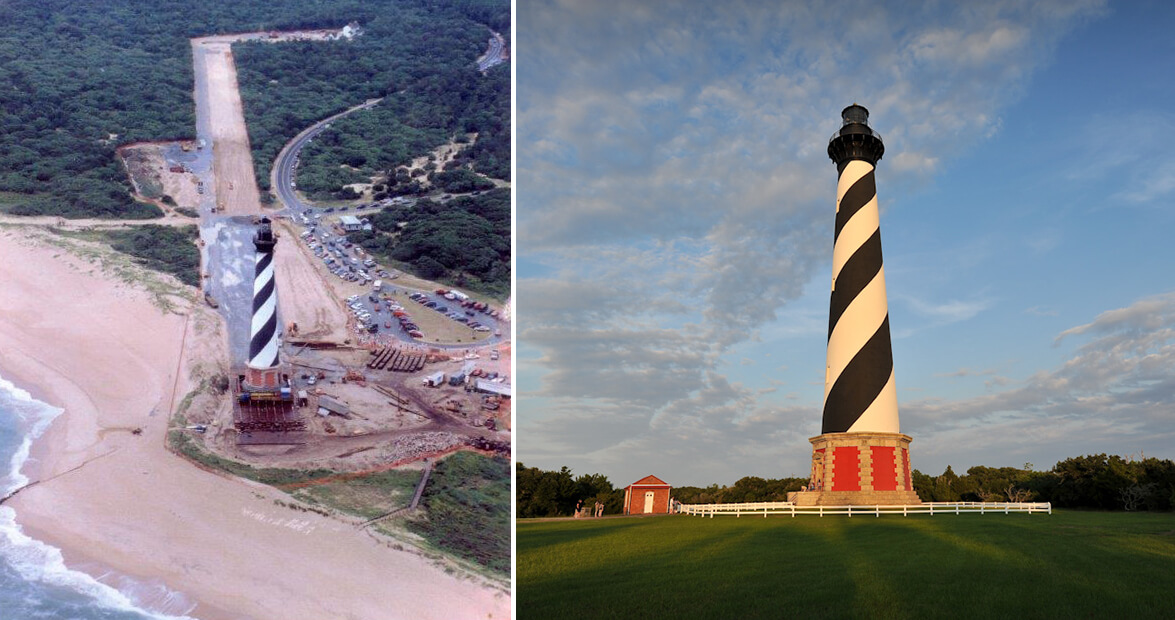 Photograph on left from Moving Hatteras: Relocating the Cape Hatteras Light Station to Safety by Bruce Roberts and Cheryl Shelton-Roberts. Photograph on right by John Buie.

When you stand at the foot of Cape Hatteras Lighthouse today, craning your neck toward its top, you’ve got to wonder how they ever found someone to move this thing.

Were straws drawn? Was it a game of Nose Goes? Or, in true Katniss Everdeen fashion, did some chump volunteer as tribute?

Beach erosion is nothing new on an ever-changing barrier island. But in the late 1990s, the receding shoreline got to be too much for the trusty lighthouse with its iconic barber pole stripes. Hatteras had to move, or it would eventually be besieged by waves in the decades to come. Relocating it would be a tall order — a 193-foot-tall one, to be exact.

“I don’t know if I’d want to be the foreman on the move for that very first lift and push,” says Chris Cabral, a supervisory park ranger for Cape Hatteras National Seashore, with a laugh. “I’m sure they didn’t sleep much.”

A lot of folks didn’t sleep well in the months leading up to what was coined “the move of the millennium.” Some tossed and turned at the thought of its relocation, while others saw it as the only option. People argued. They filed lawsuits. The move gave rise to divisiveness formerly unseen by this close-knit community of hardy islanders — but that’s only because everyone cared so deeply about it. And sometimes, when people care deeply, they care loudly.

Like the wind and rain of a winter nor’easter, the love that’s shared for this lighthouse is something fierce. Of all the chapters in its 146-year history, its most recent is the one to prove it. 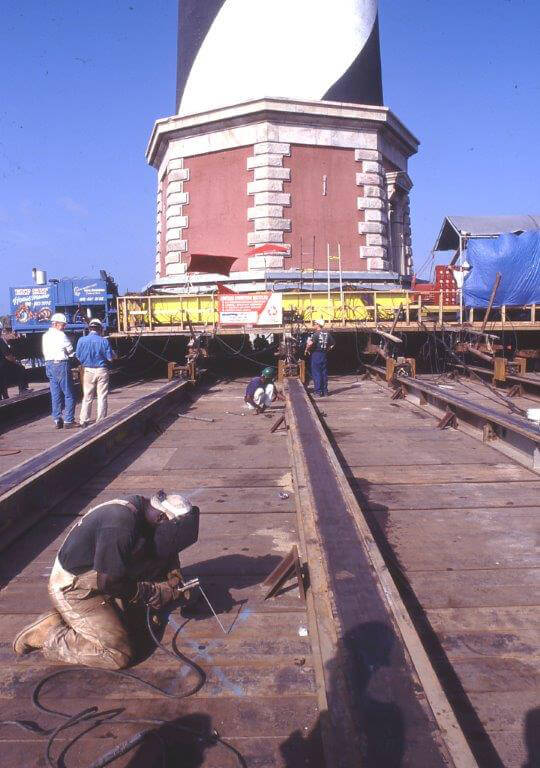 When the second Cape Hatteras lighthouse was built in 1870, a solid 1,500 feet separated it from the shoreline. It wasn’t long before the tides of the Atlantic began to encroach its base. Come 1920 — just a half-century later — the ocean had advanced within 300 feet of the station.

“This has been observed ever since there were keepers here,” Cabral says. “The ocean kept coming in, and it wasn’t retreating.”

The erosion had progressed so quickly in the 1930s that the United States Lighthouse Board, which was later merged into the United States Coast Guard, decided to decommission the light. But by the time the 1950s rolled around, erosion had slowed and the light was relit. It wasn’t until Hatteras began to once again lose a considerable amount of beachfront in the 1980s that locals began looking for a long-term solution.

There were three options: They could build a seawall around it, and the lighthouse would later form its own island; reinforce the protective jetties; or move it. Many agreed that the last of the options would have the smallest impact on the environment and the greatest longevity, but not everyone was on board. The discussion went on at length before Congress passed a relocation budget in 1998.

Bruce Roberts founded the Outer Banks Lighthouse Society alongside his wife, Cheryl Shelton-Roberts, as a way of garnering support for the move, but he remembers the worries some of his friends had about moving the landmark.

“When you look at it, you just stand there in the sand and say, ‘How in the world can they move a lighthouse?’” Roberts says.

It had been done before, but never on this scale. Cape Hatteras Light Station is a behemoth, taller than any other in the country. Joe Jakubik was the man for the job. He had successfully orchestrated the relocations of several smaller lighthouses around the country before he became project manager for this move.

He explains the move and its preparatory work, which began at the end of 1998, in simple terms.

“The first step of the process on the lighthouse itself was to mine underneath the foundation,” Jakubik starts off.

During the mining process, movers placed steel beams under the structure to provide support. The beams’ built-in hydraulic jacks, when pressurized, helped lift the lighthouse. Movers installed special roll beams for the structure to be guided along a track to its new destination.

The trek was slightly more than a half-mile long, which doesn’t sound too treacherous — that is, until you remember it could only be moved five feet at a time. For every five feet forward, the mechanism that pushed it had to be reset. It took 23 days. Once it arrived at its new location, the lighthouse was installed on a new concrete foundation, much sturdier than the thick timber mat it was originally built on.

The project concluded on September 14, 1999. Incredibly, not a single brick was lost in the move. Everyone, including Jakubik, could breathe easy — the potential threat of hurricanes and sheer size of the lighthouse might have weighed on his mind during the move, but the biggest hurdle was winning the support of the community.

“We had to fight for trust,” Jakubik says. “By the time the lighthouse started to move, we turned the corner with people.”

• • •
We often fear what we don’t know. The existence of lighthouses serve as proof. In uncertain times, our stately beacons in the sand are what steer us from harm and point us toward home.

When our beacons face uncertain times themselves, it can be a scary thing. But the Cape Hatteras Lighthouse, the not-so-stationary sentinel we supposed it to be, serves as a powerful reminder of the virtues of change.

“It is, I think, one of the great things people will remember about the Outer Banks,” Roberts says. “The lighthouse was there, and it was saved.”

Come what may in these 17 years and the hundreds after that, let us adjust our sails and look to the light.