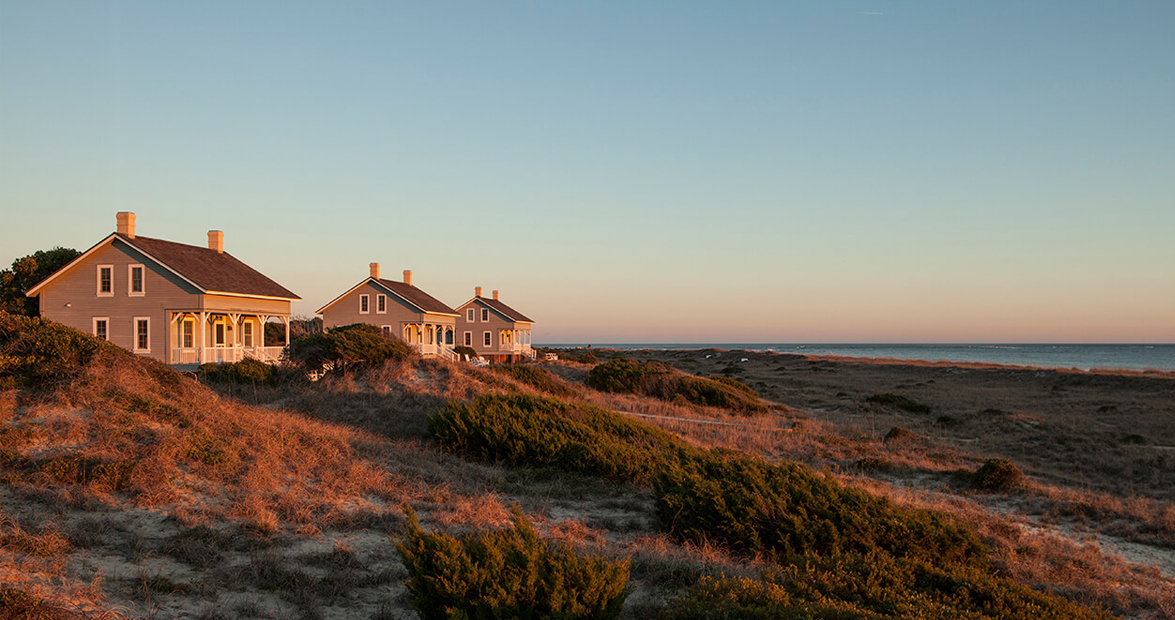 We’re ruled by the sun and the stars, when they rise and when they fall. Our circadian rhythm pulls at us much like the ocean tides beneath our feet. “Come,” the celestial bodies coo. “Have a look around.”

We don’t listen as often as we should. Sunsets instead become a novelty, noticed on the drive home, but only as much as the speckled windshield in front of us allows. And sunrises? Forget them. Saturdays and Sundays are for sleeping in after weekday mornings spent chasing the dog and rallying up the kids and making the coffee. Life often moves from Point A, to Point B, to Point C with little thought, little appreciation.

But off the mainland, a walk away from the southernmost point of North Carolina, there are three little cottages perched proudly on the dunes of Bald Head Island, reminding us all of the simpler times that were and how simple life still can be.

They are Captain Charlie’s I, II, and III, named after the Cape Fear Lighthouse keeper who occupied them alongside his family and assistants from 1903 to 1933. When the lighthouse was decommissioned and demolished in 1958, the cottages remained. Later on, they were turned into places vacationers could stay.

Away from the lights of Southport and the main stretch of the island’s beach homes, there’s a lot to marvel at from the vantage point of the cottages’ shared boardwalk. On a clear night, the Milky Way can be seen with the naked eye, and in the winter, you can watch the sun both rise and set over the Atlantic Ocean.

“If you were Captain Charlie stationed out there, there was nothing but stars. It was wild,” says Susan Grantier, who is the program coordinator for the Old Baldy Foundation, which preserves what is now the island’s only lighthouse, Old Baldy.

People build homes on Bald Head Island to distance themselves from reality. But when you stay in one of these cottages, the effect is magnified. 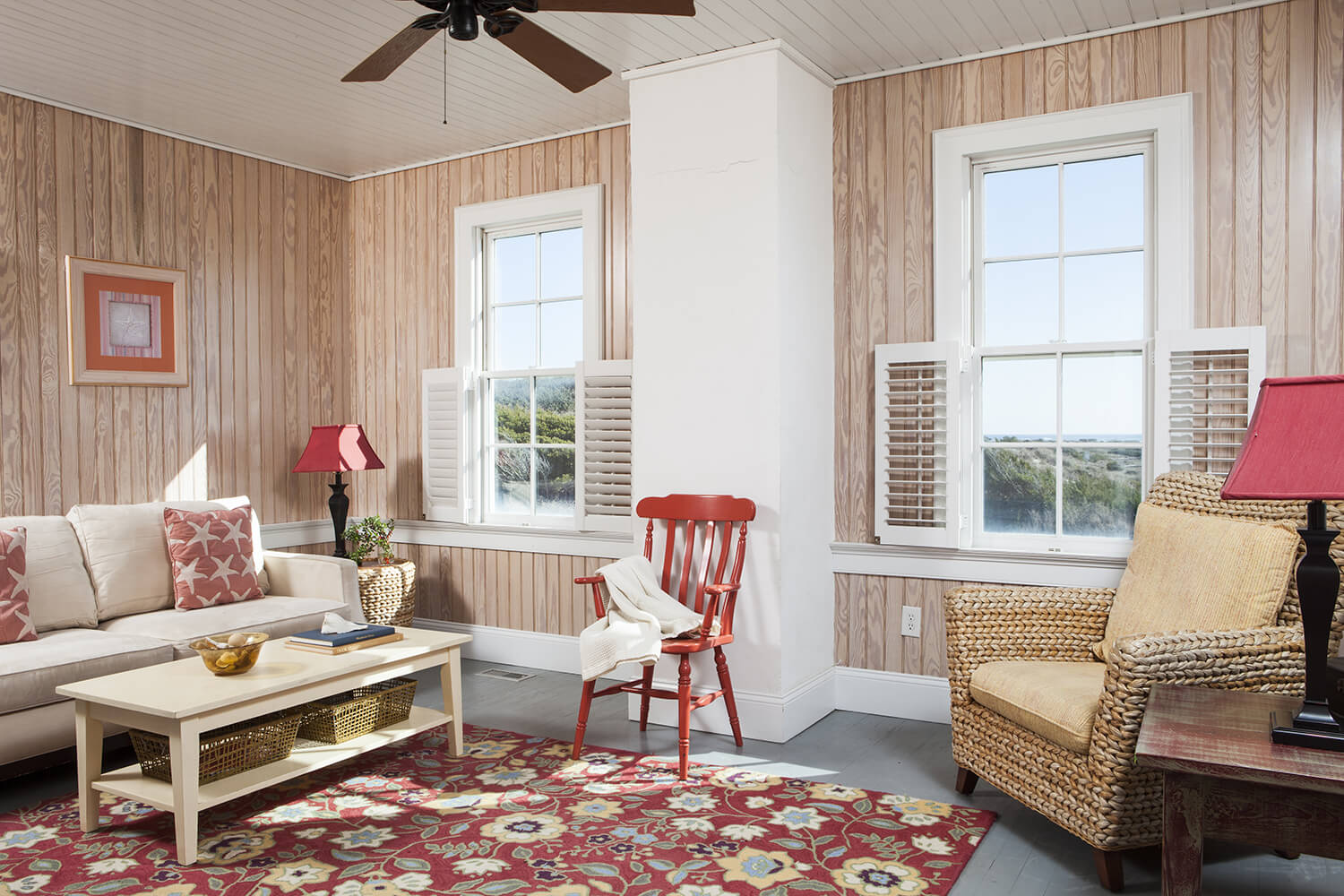 “It’s even more removed, not just geographically, but psychologically,” says Jim Henry, director of development and construction at Bald Head Island Limited. “You just think to yourself, ‘Wow, these people lived out here. There was nothing else here.’”

When you stay in these cottages and look out at the vast ocean before you, you imagine what it would have been like to be Captain Charlie Swan or one of his assistants watching for nearby ships on a stormy night.

The nearby Frying Pan Shoals are treacherous and have caused many shipwrecks. The fact that three people monitored Cape Fear Lighthouse and were each given their own house highlights the station’s importance.

“I think that’s quite a presence of personnel whereas you only need one keeper here at Old Baldy,” Grantier says. Old Baldy, North Carolina’s oldest standing lighthouse, is located near the Cape Fear River entrance and was never intended to help sailors navigate the shoals.

Living out here before modern day conveniences arrived was work, but it was fun, too, especially for Captain Charlie’s children, who spent much of their time growing up in an untamed, natural playground.

There were deer to chase and alligators to be chased by. One bit of lore even exists that one of Captain Charlie’s daughters bet her skeptical brothers that she could swim all the way from the island to Southport. Having spent lots of time with her father, she studied the tides and currents of the Cape Fear River enough to know that if she swam at low tide, she could use the exposed sandbars to her advantage. She succeeded, and they had to pay up. Attagirl.

The family stories linked to the 112-year-old cottages make those who stay in them feel like they, too, can build a life here.

Each renovation nods to the cottages’ history, and they’ve maintained their cozy and inviting characteristics.

“Part of the intrinsic value of Bald Head Island is not just its remoteness but also its little place in history,” Henry says.

The hardwood floors are original to the homes, and they have been painstakingly sanded and refinished. Both the walls and ceiling feature classic, nautical, beadboard paneling. Black-and-white photographs of the Swan family are proudly on display. It’s all about the little details.

And though the cottages’ sizes are modest compared to palatial homes elsewhere on the island, they feel open and are filled with light. One wonders if there’s ever any bickering among those who stay here about who gets what bed because nearly every window features an ocean view. That’s important because when the keepers were away from the lighthouse, they had to be able to easily scan the horizon for ships in distress at any moment.

From the outside, these homes have a subtle New England feel with their chimney flutes and rustic shingles.

“It’s almost like being way out on Cape Cod, but we have better weather,” Henry says with a smile.

But of course, any proper Southern beach house needs a front porch. These cottages’ porches are made whole by creaking screen doors and rocking chairs that are forever in motion. They’re inviting as can be. Henry actually got married to his wife on the porch of Captain Charlie’s III, and several others have done the same. 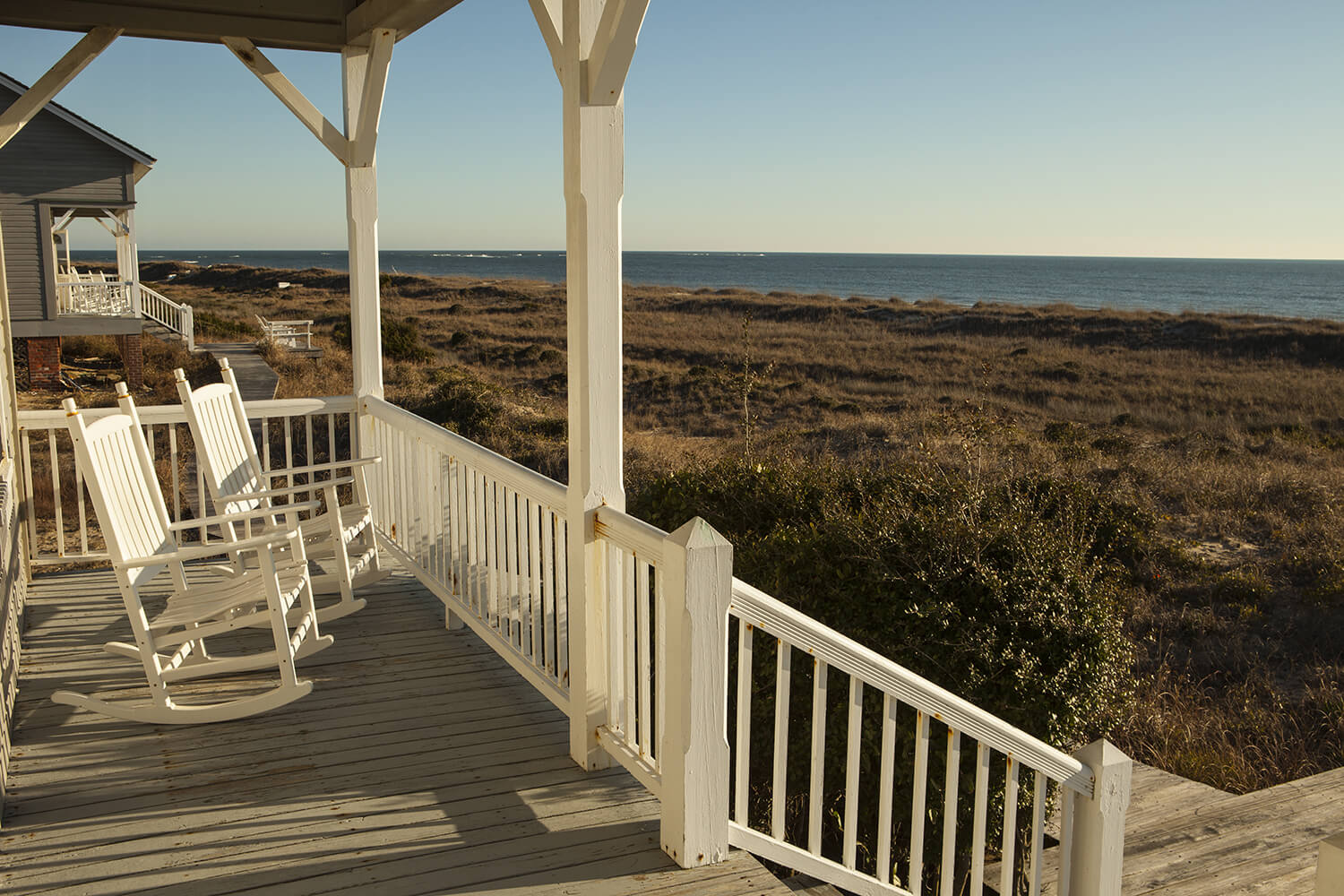 These three cottages have power to turn people into poets. Just flip through the guestbook to see why.

Some messages are simple: “The rum is gone. The skin is burnt. It’s time to go home.”

But many guests tenderly pour their hearts out onto seawater-wrinkled paper, like sand from shoes after a final walk down the beach.

“We are old friends, having known each other for decades through several personal ‘incarnations,’ ex-wife, lover, mother … Yet one thing remains constant, as comforting as the breeze on this porch, the rugged beauty of the sea oats and cedar and the sound of the sea, and that is the magic of the island herself,” one entry reads.

It’s hard to leave this place of such simple beauty — just ask one of the friendly ghosts who are said to haunt the place — but those who love it always find a way back.

Until that time comes and another summer beckons, we cling to the memories made on the porch, when we watched every magnificent sunrise and sunset we have vowed to spend our lives chasing. But it’s on these very porches that we realize these sunrises and sunsets follow us everywhere we go. We just have to take a look around.