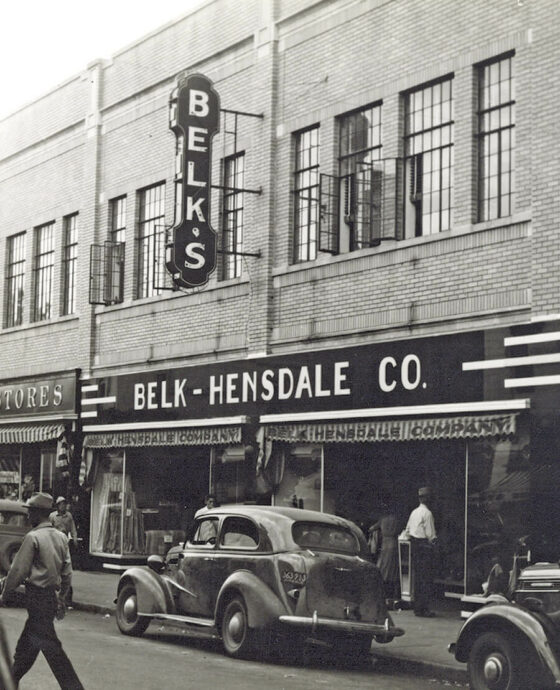 Whether it’s a Miracle on 34th Street with a skeptical Natalie Wood at Macy’s, A Christmas Story with a terrified Peter Billingsley at Higbee’s, or Elf with a perplexed Will Ferrell at Gimbels, classic Christmas movies feature a classic scene in a department store. And in North Carolina, there’s no more classic department store than Belk. For decades of holiday shoppers, a December day at Belk has fulfilled the gift-giving list: a belt for a brother, a nightie for a sweetie, a teddy bear for a toddler, a yo-yo for a youngster. Never mind lunch, a visit with Santa, and the spectacular decorations, from larger-than-life wrapped presents or dangling gold bells to drifts of faux snow amid glittering lights. 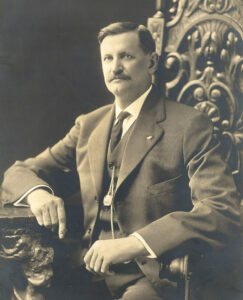 While the aforementioned movies are comedies, retail was serious business for William Henry Belk, who wasn’t quite 26 when, in 1888, he borrowed $500 to open his New York Racket store just steps from his home in Monroe. These days, “racket” is a pejorative term, but in the late 1800s, it designated a store selling a wide range of inexpensive items. While other merchants called their businesses general stores, Belk thought that attaching “New York” would give his emporium big-city cachet. In 1888, North Carolina was still in a post-Reconstruction, largely agrarian economy. Farmers sold their crops annually, at harvest, and had to make the income last for a year. When the money ran out, farm families purchased on credit, and store owners had the upper hand to change prices and credit rates, forcing farmers to negotiate — and often get into money trouble. 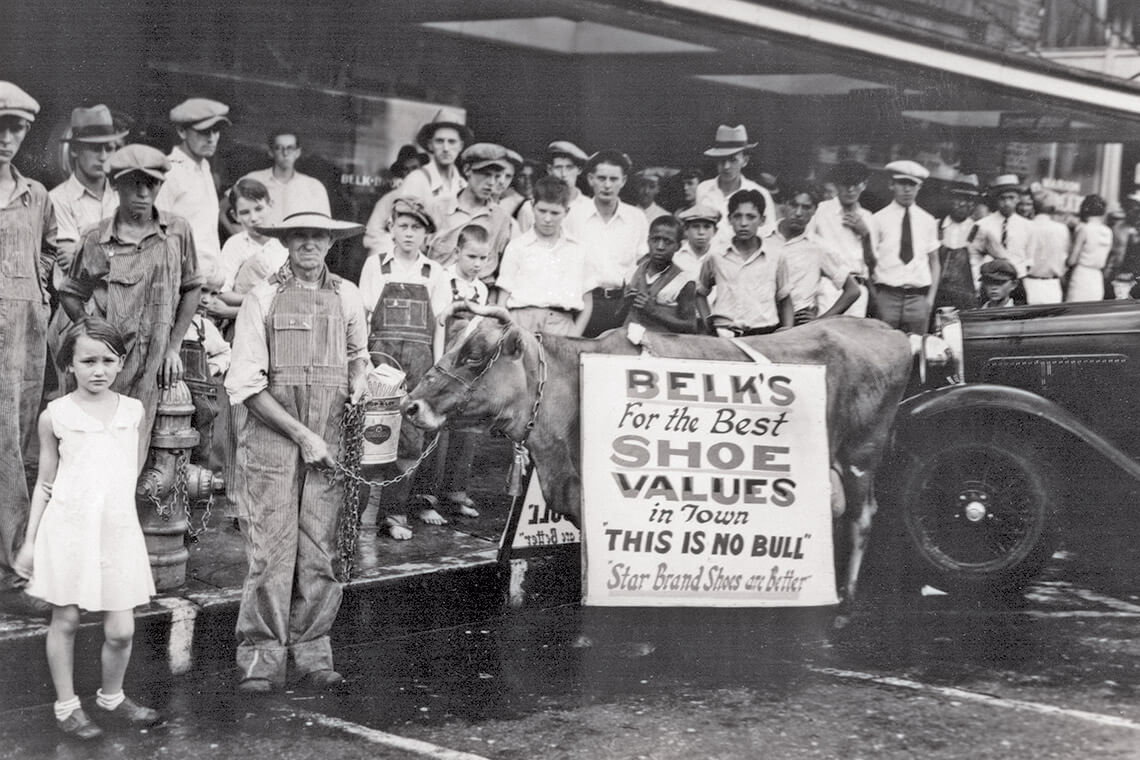 W.H. Belk knew that a livestock-based advertisement (like at the Belk store in Marion in 1932) was sure to turn some heads. Photography courtesy of BELK INC.

Belk had other ideas. Buy in volume, sell at a fixed price — for cash — and advertise. “We want your cash. That ain’t no bull,” reads the slogan painted on a cow — yes, a cow — in a photograph hanging in the Charlotte home of Katie Morris, granddaughter of W.H. Belk. “He was a real marketer, ahead of his time,” she says with a laugh. “His mother was a widow, and he’d worked from an early age.”

Christmas in those days likely meant a new pair of shoes, and the store catered to farmers, with the largest portion of its goods devoted to thread, pencils, underwear, socks, and piece goods. “He sold overalls to the well digger, spectacles to the man’s grandmother, and suits for his Sunday meetings,” wrote Greensboro author Howard E. Covington Jr. in his 1988 book, Belk, A Century of Retail Leadership. The focus on practical necessities stayed that way for decades. Morris well remembers going to the grand flagship store (opened in 1910) on the corner of Trade and Tryon streets in downtown Charlotte at Christmas in the ’60s; there, her mother bought beautiful fabrics from bolts to have her Christmas dress made. 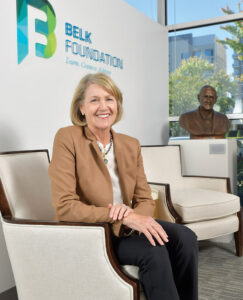 Katie Morris credits her grandfather’s success to his ingenuity and knack for marketing. photograph by Brian Gomsak

Along with cash sales, bargains, and value — “Cheapest Store on Earth” was the store’s motto — W.H. Belk also believed that people were a company’s greatest asset: honest, hard workers with integrity. For Belk, that meant churchgoers, especially Presbyterians, who’d long believed that education was important because it meant you could read the Bible. (To this day, the Belk families are great financial supporters of education.) W.H. and his brother John, who’d left his country-doctor practice to join the family business, expanded by partnering with investors in other towns, hence the combined names familiar to so many North Carolinians: Hudson Belk in Raleigh, Belk-Leggett Co. in Durham, Belk-Williams Co. in Wilmington, Matthews-Belk Co. in Gastonia, and many more.

The goal was that each store would serve — and improve — its specific community, so that more bathing suits dangled on racks near the coast, while more sweaters were stacked in the mountains. These partners were friends, not merely business colleagues. “They came to parties,” Morris says, “and we went on vacations together.” When Hurricane Hazel hit in 1954, Morris and her family left a Myrtle Beach cottage and moved inland to stay with a partner’s family until danger had passed.

In the ’60s, a move toward consolidation to take advantage of the buying power of a more unified business began, a process that would take some 20 years of negotiations and remodeling. The South was becoming more urban, shopping malls were opening, and Belk intentionally shifted from a value orientation to a fashion orientation. Brand names — Anne Klein, Ellen Tracy — were introduced. Morris recalls the thrill of actress Elizabeth Taylor’s visit to the SouthPark Belk to promote her fragrance White Diamonds. Designer Oscar de la Renta was another A-list visitor. “My father could never get his name right,” Morris says, laughing. (And speaking of names: “What is it called,” I ask, to settle, once and for all, an ongoing debate: “Belk or Belk’s?” “It has changed with the times,” she replies. “Belk Brothers, Belk’s, and now Belk.”) 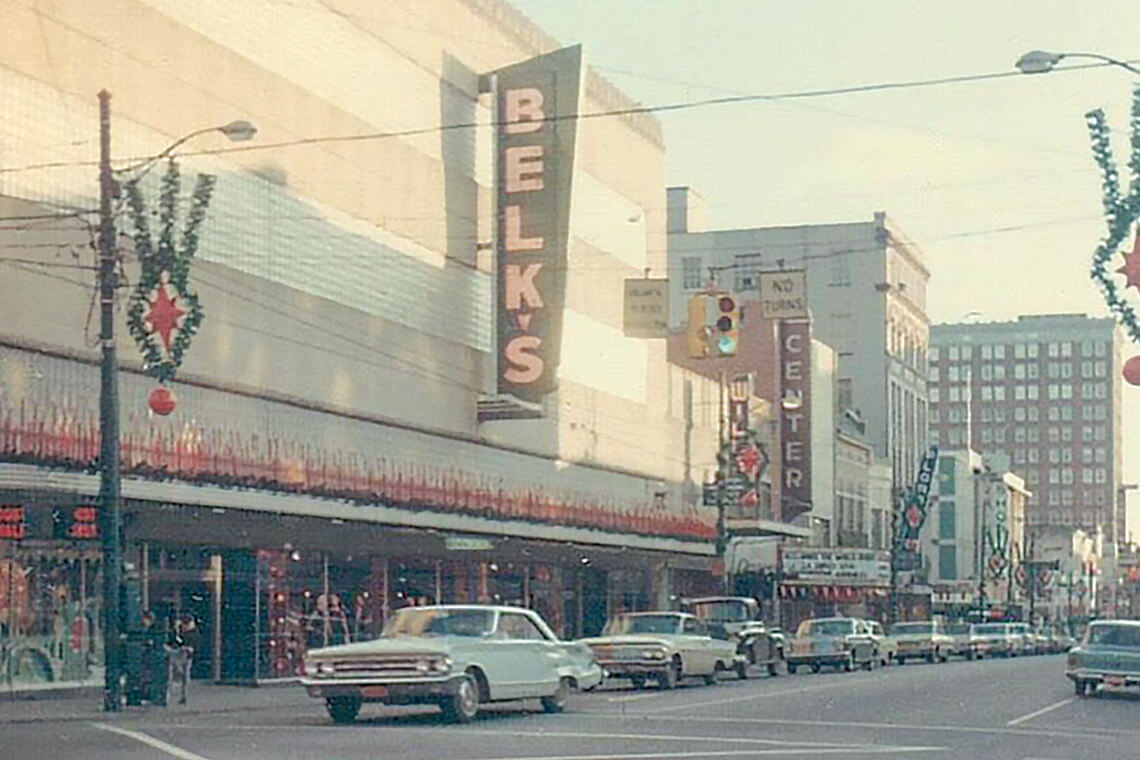 At Christmastime in the mid-’60s, Belk was the crown jewel of Elm Street in downtown Greensboro. photograph by C.W. NOAH, COURTESY OF BRADLEY JUSTICE

Christmas for management, though, was no celebrity romp. “We worked Christmas Eve and were back on the 26th,” Morris says. But for customers, Christmas shopping at Belk was sheer excitement: the splendid displays of largesse; the glitter of gold, green, and red decor; the busyness at the gift-wrapping department. For a friend from Pink Hill, it was eating at the cafeteria on the main floor, and “just the magnitude of the decorations.”

“All three children, my mother, and my grandmother would dress up to meet, shop, and eat at the counter on the main floor,” a friend from Charlotte marvels. “The escalator itself was a thrill, passing by the huge velveteen bows and clusters of bells, trees so decorated that you couldn’t see the branches.”

A friend from Asheboro vividly remembers her local Belk’s wondrous second-floor “Secret Shop,” a child-size store-within-a-store — “the ceilings were low and the door was tiny, and cotton-batting ‘snow’ was everywhere” — where affordable gifts were available for the all-important presents for parents: Wind Song perfume, Old Spice aftershave. Over in Raleigh, Peace College students dressed as elves to assist pint-size shoppers with allowances at the Crabtree Valley Mall Belk’s Secret Shop.

Belk, Inc., was sold in 2015 to Sycamore Partners, a New York private equity firm specializing in retail and consumer investments. But for more than 125 years of this family-owned business, what a heyday it was. New York City has Macy’s and Atlanta has Rich’s and Dallas has Neiman Marcus, but baby, we have our own retail behemoth. North Carolinians take a grand, deserved pride in what belongs to us: barbecue, beaches, and — especially at Christmastime — Belk.