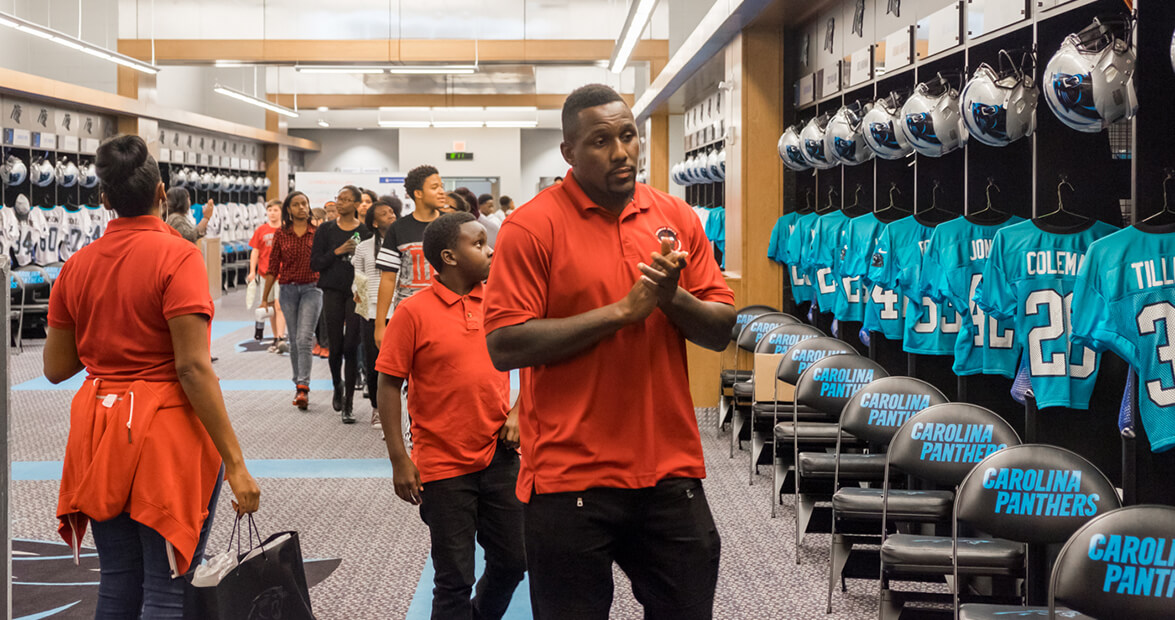 Editor’s note: This story first appeared on ourstate.com in October 2015.

They call him TD around here. It’s a nickname that alludes to touchdowns (though he isn’t exactly the one scoring them) and to football.

As the Carolina Panthers’ longest tenured active player, the game is what he’s known for. Ask anyone who stands in line waiting for his autograph. They’ll point to the backs of their replica No. 58 jerseys that read DAVIS SR.

And during tonight’s radio show at Bank of America Stadium, the Panther Talk team introduces him by name, first and last.

But the kids, his kids — the 30 who are here right now — all call him Mister.

On the field, he’s a linebacker. But on Monday nights — if he isn’t busy tackling and blitzing in front of a crowd of around 70,000 spectators — he’s a teacher. And even if there is a game, Davis still uses Skype to provide some virtual instruction.

The academy Davis runs is a part of his Defending Dreams Foundation, which serves underprivileged children in the Charlotte community as well as Greenville, SC and Shellman Ga.

The children he works with are all in middle school, and yep, their friends are skeptical that the Thomas Davis Youth Leadership Academy is a real thing, too.

“They don’t believe me that we actually get to see Thomas Davis and stuff,” Joshua Hampton tells me. Like any other 12-year-old, he likes to add “and stuff” to the end of many of his sentences.

“[The academy] teaches us how to be great leaders and how to be prepared and stuff,” Joshua says.

During these classes, Joshua and his classmates learn about anything from proper dining etiquette to public speaking. Tonight they’re on a field trip, taking a tour of the stadium where their idols play every week, and learning about various careers associated with the NFL team.

The topics vary each week, but they all relate to Davis’s goal of empowering youth. As someone who grew up in a low-income, single-parent household, he sees a lot of himself in the children who his Defending Dreams Foundation serves.

“I just understand that being a Panther player and going through all of that stuff, I have a lot of information and a lot of knowledge that I can give to these kids so they won’t have to go through the struggles I went through,” Davis says.

It’s his dedication to this cause that earned him the 2015 Walter Payton NFL Man of the Year Award.

The academy is in its seventh year, and there are now high school seniors preparing to graduate who participated in the program as sixth graders.

That’s been especially rewarding for both Davis and his wife, Kelly, with whom he shares four children of their own, but so are the small improvements they notice week by week in the children they work with.

“We hear the stories of them coming back and saying, ‘I sat with somebody I didn’t know today,’ or ‘I helped a student who was about to get into a fight,’” says Kelly, who serves as the executive director for the foundation. “We know that it’s because we helped them in the academy.” 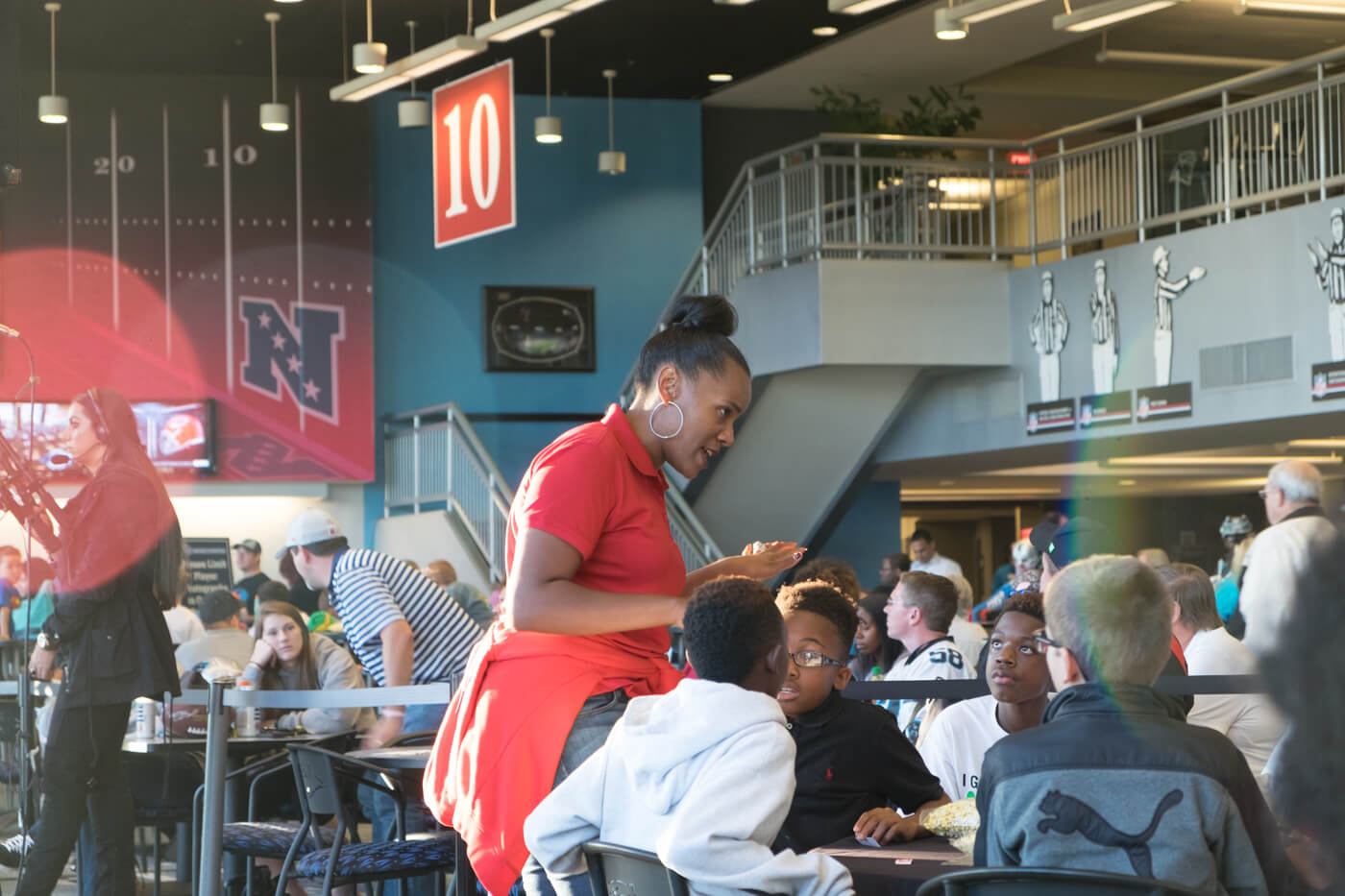 Last week was a bye week for the Panthers, which means the pressure is on as the 4-0 team prepares to head to Seattle for an away game against the Seahawks on Sunday.

No doubt Thomas has a lot to think about between now and then. Fellow linebacker Luke Kuechly is on the mend following a concussion he sustained in Week One, and the Seahawks have dealt the Panthers several close losses in recent years.

But no matter what’s on his mind, just as with any pregame huddle, Thomas has an important message he needs to deliver tonight, too. This time it is to his other team, his pint-sized one, and this message is one that requires calling in reinforcement.

Eugene Robinson, an analyst for the Carolina Panthers Radio Network and former NFL safety, is also here to give an impassioned talk about the importance of having a supportive team during the game’s — and life’s — most challenging moments.

“You are never alone, and there is strength in that,” Robinson says. “When life knocks you down, and it will, I’m with you, baby. I got you.”

The children sit in the rows of the press box, captivated by Robinson’s charisma, while Thomas and Kelly watch from the sidelines. Robinson ends his speech by starting a chant to “Keeeeeeeep POUNDING.” 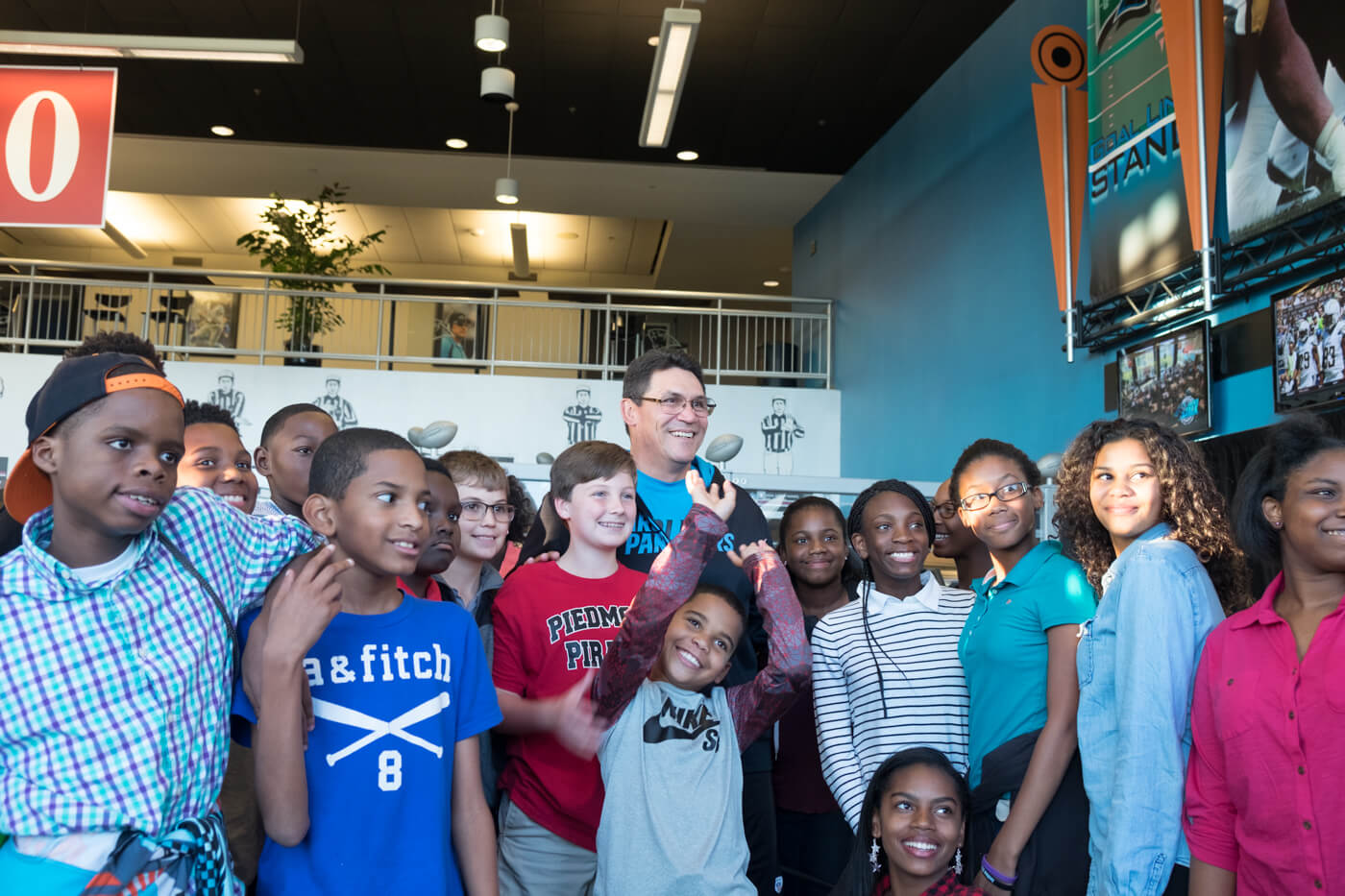 Panthers coach Ron Rivera poses for a quick picture with academy students before a live broadcast of Panther Talk. photograph by Logan Cyrus

Thomas’s speech that follows is much simpler but just as critical. After learning that a couple of students in the class have been struggling with behavioral issues in school recently, he’s quick to remind them about the responsibility of being a leader among peers.

A chorus of “Yes, sirs” follows at the end of each of his sentences. If there’s anyone who can inspire respect so quickly, it’s a linebacker who holds one of the best all-time tackle records for the Panthers.

It’s a matter of tough love, but that’s because these children matter so much to Thomas and Kelly.

“Some of these kids are really searching for someone to listen to them, to genuinely care about them,” Thomas says. “That’s what we do.”

Presented by the Foundation for the Carolinas 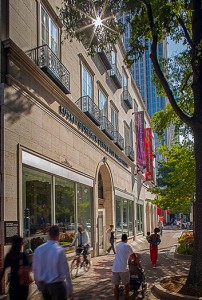 Foundation For The Carolinas is a nonprofit community foundation, with assets of $1.7 billion, serving a 13-county region in the Carolinas. We work in close partnership with donors, civic leaders, businesses, and nonprofits to achieve a wide variety of charitable goals and to inspire philanthropy that will benefit generations to come. FFTC encourages and makes possible charitable giving by individuals of all means to benefit their communities.

FFTC offers an array of philanthropic solutions to help you and your family support the causes you care about most today, with planned giving solutions to ensure your legacy for the future. You focus on the joy of giving, while we handle the burden of administration. Funds can be established with a variety of assets, and we make it easy to get started. FFTC provides tax-efficient giving vehicles that maximize the impact of your philanthropic dollars.

Our collective philanthropy makes us stronger. Contact us today to join the thousands of generous citizens who have invested and shared in our community.