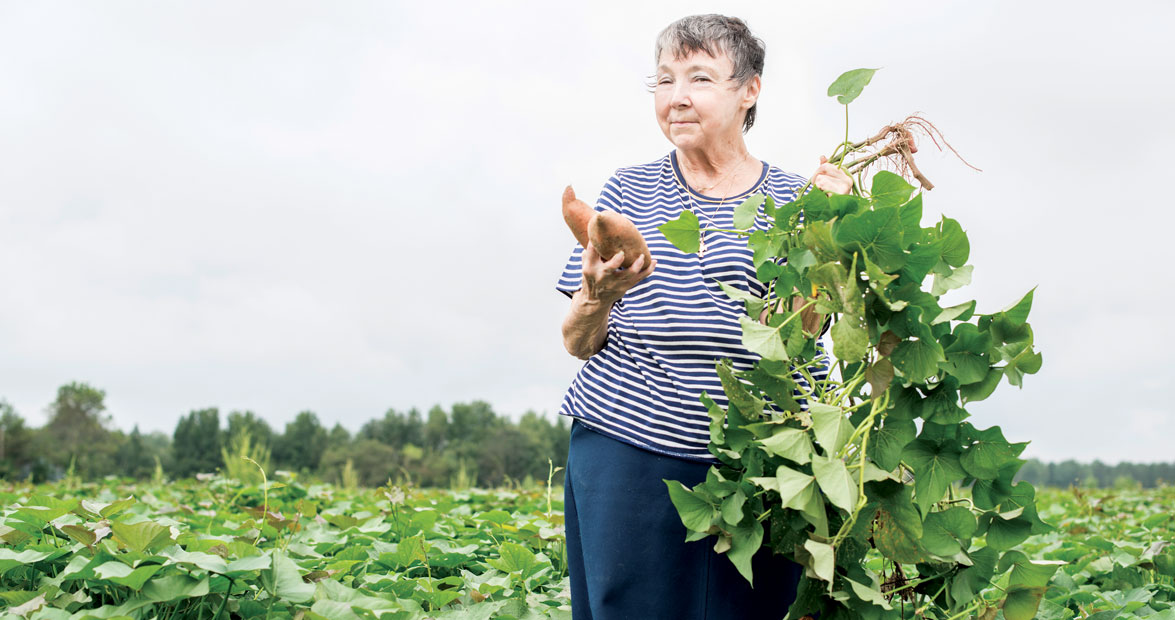 EDITOR’S NOTE: This story first appeared in the November 2012 issue of Our State. Celia Batchelor passed away on September 1, 2018, at the age of 71.

They did it, grudgingly, at the urging of Celia Batchelor’s fourth graders from Elvie Street School in Wilson, a resourceful collection of 10-year-olds who kept up a two-year campaign, earning themselves a nickname: The Tater Tots.

By granting the sweet potato official state vegetable status, lawmakers did more than elevate an overlooked, subterranean vegetable. They showed several dozen kids from some of Wilson’s poorer neighborhoods that it doesn’t always take lobbyists, lawyers, and money to make things happen. You don’t always need a three-piece suit to get a legislator’s attention.

Even if you’re a fourth grader from Wilson, sometimes all it takes is the same persistence and heart that lies inside a sweet potato — the same magic that turns a root vegetable into a soufflé, a lumpy spud into a pie.

“This is going to sound like Don Quixote,” says Batchelor, now retired from teaching, “but we thought maybe we could empower those kids. I remember them telling me, ‘I learned that even kids can make a difference.’ Isn’t that great? I get chills thinking about it.”

Sitting in the public library in downtown Wilson, 17 years removed from the great sweet potato victory, Batchelor takes out a yellow social-studies textbook and turns to page 304. On that page a section explains the three branches of government, a dry but essential piece of grammar-school learning. It shows a picture of a little girl with a big idea, a lightbulb glowing over her head.

“This is probably what kicked off the whole thing,” Batchelor says.

Raised in Wilson, swept off to Georgia after marriage, then relocated to her hometown, Batchelor arrived at Elvie Street in the early 1990s to discover her new school a bit rough. She recalls concertina wire on the fencing.

Many of the kids came from poor households. That fourth-grade class didn’t have much of a sense that the government served the public — all of the public — and that it can be called upon to listen to somebody whose voice doesn’t easily travel all the way to the halls of downtown Raleigh.

In 1993, Representative Gene Arnold, a Republican from Rocky Mount, visited Batchelor’s class and left the students inspired. The state vegetable idea had been rolling around the school and the town of Wilson for some time, Batchelor says. North Carolina produces more sweet potatoes than any other state, growing nearly half the country’s supply. And Wilson sits right in the center of sweet potato farmland.

But the vegetable’s local connection stretches back further than today’s farmers. American Indians were growing sweet potatoes when Columbus landed. Dinosaurs may even have munched on them.

“Everybody in the room had something they liked about it,” Batchelor says. “What can you say bad about a sweet potato? Maybe you would say it’s ugly. I’ll take that. But we had all this ammunition.”

With Arnold’s blessing, the kids launched their state vegetable campaign. But they quickly learned that it takes more than one letter to set the wheels of government spinning. For a long time, spuds went nowhere in Raleigh’s chambers.

When Arnold returned to Elvie Street a year later, a new class of fourth graders, full of the same civic pride, not-so-gently reminded him, “Mr. Arnold, you told Ms. Batchelor’s class last year you were going to introduce a bill about the sweet potatoes.”

Here the story turns slightly sour. The kids’ enthusiasm didn’t move state lawmakers to tears. When Arnold made good on his promise, his colleagues rewarded him with a basket of taters and a tinfoil crown. Sweet Potato King, they called him, more than a little mockingly.

Worse scorn awaited the children in newspapers across the state. The Wilson Daily Times took a curmudgeonly stance in an editorial condemning the kids’ effort as a waste of the government’s time.

“Never mind that having 10-year-olds dictate statewide legislation makes no sense,” The Times wrote in 1995. “Bills declaring state vegetables, drinks, fabrics, rocks, rodents, fungi or soil types should be banned from the Legislative Building on principal as a matter of respect for the taxpayers who are paying $55,000 a day to keep the legislature in session. If even one day of debate went into this legislation — and that may be a low estimate — the taxpayer has been robbed.”

Once the bill reached the Senate, every vegetable with a constituency reared its head demanding fair consideration.

“Many of us think it ought to be the rutabaga,” Sen. Tony Rand, a Democrat from Fayetteville, said at the time. “And that will have to be resolved.”

Back home, the kids kept writing. Young Shaun Griffin penned the most widely quoted and effective words. He promised to hound the state’s political establishment “from now until doomsday. We’re never going to quit, never. We will nag you to death.”

Hundreds of letters followed. The Tater Tots got busy.

Batchelor says the knockout punch came when she fetched a dusty directory of schools across the state and had the children write to fourth graders from Murphy to Manteo.

Elvie Street didn’t find an army of supporters. The state’s 10-year-olds didn’t rally around them in solidarity. But The Tater Tots did catch the attention of an elementary school in Raleigh, and its students joined the sweet potato mission.

Finally in July 1995, the Senate joined the House and inked the sweet potato bill 43 to 3.

“Yes! Yes!” Representative Arnold told The News & Observer in Raleigh. “I’m so happy for the kids.”

The only letdown, Batchelor says, was that the bill passed in the summer when the kids weren’t in school to celebrate. But she saw Shaun Griffin in media interviews, telling the doubters how he learned that even kids could make a difference.

Years later, Batchelor met one of her former students working at a K&W Cafeteria. The student insisted that Batchelor tell all of her coworkers how they helped pass the sweet potato bill.

Another time, Batchelor was idling at a Wilson intersection when a bearded truck driver pulled alongside and repeatedly honked his horn. She ignored him until she noticed that he was a sweet potato boy all grown-up. “Ms. Batchelor! Ms. Batchelor!” he shouted. “It’s me, Donald!”

At the end of her career, after hundreds of days trying to bring civics to life, of telling a room full of fourth graders about Patrick Henry and Thomas Jefferson and why they’re important, Batchelor recalls with special fondness the two years she spent convincing a grown-up world to listen to the ideas coming from growing brains.