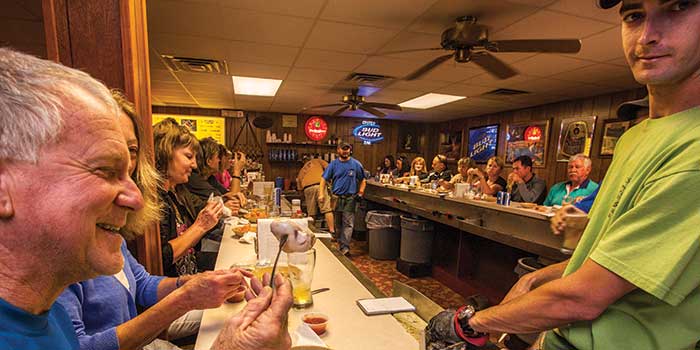 There are no windows in C&H Oyster Bar in Elizabeth City, a blue building that squats beside North Road Street. Plastic siding covers nearly every inch of its exterior. There’s no way to see what’s inside, but everyone lined up outside seems happy.

It’s about 5 o’clock in the evening, and folks are smiling, chatting with one another and catching up on local news. No one is bothered by the wait. That’s just part of the experience at C&H Oyster Bar. After all, a few minutes is nothing compared to the months-long hiatus the restaurant takes from May through September.

Now that it’s open, folks like Evelyn Colonna, from Norfolk, Virginia, are willing to wait for oysters on the half shell.

She sits on a stool at the horseshoe-shaped bar, working on her second dozen oysters. Behind the bar, four shuckers pry open oyster shells as customers fill in available seats.

Evelyn and her husband, Bill, have been coming to C&H for 20 years. Bill is working on his second dozen oysters, too. They’re plump and briny and taste fresh from the sea.

“There are very few places like this anymore,” Bill says. “The good food, the people, the shuckers — it’s interesting to watch ’em shuck.”

Jeremy Clayton shucks oysters for customers like Bill and Evelyn.

He’s one of the younger shuckers among a team of part-timers who work at the oyster bar in the evening while keeping a day job — at the nearby U.S. Coast Guard base, for example, or at the fire station. Most of them have worked here for a number of years. Their experience helps them shuck between 75 and 90 bushels of oysters a week.

“You get pretty good at shucking,” Clayton says, “or else you bleed to death trying.”

They shuck oysters steamed or raw, depending on a customer’s taste. Either way, buckets of oysters emerge from the kitchen and are dumped into a metal trough beneath the bar.

When shell meets metal, a noisy clang sounds. It tells Clayton and fellow shucker Buddy Harris that it’s time to grab their knives and get to work. As clouds of steam obscure their faces, they explain how cooked oysters are easier to open than raw ones. In no time, the two plop a mound of shiny oysters into a plastic bowl and slide it to a customer.

Some eager eaters can’t wait that long. They start throwing back oysters before the shuckers finish. Clayton doesn’t mind.

“It’s kind of like your backyard,” he says, “a relaxed atmosphere, people to talk to.”

It’s been this way since the crowds started coming. But the crowds didn’t come at first.

Tom Cox Jr., the man who opened C&H in 1967, points to a ledger from the restaurant’s early days. On December 11, 1967, receipts totaled just $45.05.
Funny thing is, Cox first got into the oyster-shucking business to make a little extra money.

“I was working at the base in Elizabeth City, and I wasn’t making a lot of money,” Cox says. So he started shucking oysters part-time at an oyster bar named Tuck’s. When its owner decided to sell the restaurant, he sold the kitchen equipment to Cox so he could open C&H. “He sold me his equipment for $200, and it took me three years to pay him back,” Cox says.

Today, in one corner of the restaurant, you can find a framed menu, yellowed with age, when fried oysters cost $1.65 and oyster stew was only a buck.

The menu and the restaurant have expanded since then. Now you can order steamed or fried shrimp, frog legs, barbecue sandwiches, and more. The restaurant includes a larger dining room and kitchen now, too.

The food costs a bit more, but if you order a dozen oysters, the regulars say you’ll usually receive a few extra.

“They always give you big portions,” Bill says. Now that he’s finished his oysters, he’s moving on to a giant mound of lump crabmeat in butter, with a few splashes of Texas Pete. His wife, Evelyn, has a plate, as well.

Across the bar, Lee and Ellen Tolliver settle onto two stools. They’ve been coming here for 15 years, and just recently moved closer to town.

“The joke is we moved down here to be closer to the oyster bar,” Lee says.

He says they eat at C&H nearly every week. On one visit, he says, he ate 12 dozen oysters in one sitting. “I don’t know how I walked out of here upright.”

While the regulars help Cox keep the doors open, like a proud father, he can name the celebrities who’ve visited C&H over the years — Walter Cronkite, Chet Atkins, Catfish Hunter, Wolfman Jack.

As for the lack of windows in the restaurant, it turns out there were windows — plate-glass ones, in fact — before the building was remodeled. But when wayward golf balls from the country club across the street broke one too many windows, Cox had them boarded up.

No one seems to mind, however. The customers come here for what’s inside.

This story originally appeared under the headline, “Shucking Ain’t Easy.”

Peggy Sijswerda favors oysters cold and raw, with a splash of Texas Pete. This is her first Our State story.