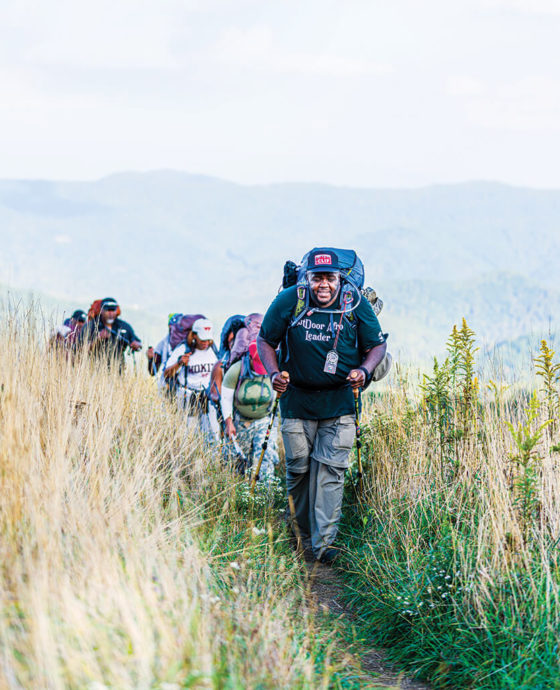 James Smith found himself at his first Outdoor Afro outing about two years ago, when he joined the group for a hike up to Hanging Rock. A former Boy Scout, the electrical engineer from Charlotte soon became a regular on the club’s excursions across North Carolina. At first, he took on the support role of sweeper — the hiker who walks last in a group to make sure no one gets left behind — and then he immersed himself in the organization as a sort of elder statesman of outdoor recreation. After all, he had 40 years of experience on trails. “I was just volunteering to help out,” Smith says. “I didn’t realize until later that people thought I was a leader.”

Today, Smith is one of two leaders of Outdoor Afro’s Charlotte network. Each month, he helps coordinate up to three activities aimed at building community among black nature enthusiasts. Outdoor Afro is a model for a growing number of groups across North Carolina, including the Charlotte-based Issa Vibe Adventures, that bring African-American hikers and campers together for treks into the woods. But while Issa Vibe appeals more to black millennials, Outdoor Afro draws a generally older crowd. Launched as a blog in Oakland, California, in 2009, Outdoor Afro has since spread to 30 states and includes networks in both Charlotte and Raleigh. The idea took form when its founder, Rue Mapp, saw a need to promote safe spaces for African-Americans to enjoy nature. “What we do is create community for black people to be comfortable outdoors,” says Yanira Castro, Outdoor Afro’s communications director.

Nature hasn’t always been so comfortable for black people, particularly in the United States. “For enslaved people, the outdoors was not a safe place,” Castro says. “You were forced to labor under horrible conditions or be chased in the woods.” Even long after slavery ended, nature reserves were not welcoming. “The legacy of the Jim Crow era continued this feeling of danger,” Castro says. When Charlotte’s first public parkland, Independence Park, was established in 1904, black people were denied entry except as servants of white children. In 1927, Morgan Park, in the Cherry neighborhood, became Charlotte’s first park for African-Americans, but it was inaccessible to the majority of the city’s black citizens, who lived in other neighborhoods. In 1939, Jones Lake, near Elizabethtown, became the first state park for black North Carolinians. By the 1940s, more parks were built for African-Americans, and in 1955, the U.S. Supreme Court banned segregation in public parks and playgrounds.

In the decades since the civil rights movement, more impediments to accessing public lands have been removed as African-Americans have gained positions of power. Howard Lee, who was elected Chapel Hill’s first black mayor in 1969, later became secretary of North Carolina’s Department of Natural Resources and Community Development. In 1977, Lee proposed a trail that would run from the Blue Ridge Mountains to the sand dunes of the Outer Banks. His idea became the Mountains-to-Sea Trail that so many hikers enjoy today. And yet, fears of nature among many African-Americans have lingered, as have stereotypes that associate black people only with urban centers. Organizations like Outdoor Afro and Issa Vibe Adventures — neither of which exclude other racial or ethnic groups — aim to shatter those stereotypes, alleviate historical fears, and make exploring nature exciting for everybody.

How, exactly, was the Mountains-to-Sea Trail created? By accident. Listen to Howard Lee, former secretary of the state’s Department of Natural Resources and Community Development, tell the story in the first episode of Away Message’s fourth season, available at ourstate.com/topics/travel/podcasts/ or on your favorite podcast app.

On a late morning along the Appalachian Trail near Hot Springs, Smith leads 12 hikers through lush thickets that are radically green. The group is on an overnight backpacking trip from Lemon Gap to Max Patch bald. Smith is a bigger man, around six feet, 260 pounds, with a quick laugh and confident leadership style as he takes the party up five miles of narrow trail, across running creeks and lichen-covered rocks. He’s in his element here, and the feeling is contagious among the hikers who trail him. Smith finds joy in sharing his love of the outdoors. “I’m inviting these people into my life,” he says. “Outdoor Afro has enabled me to bring more people who look like me out into the field.”

The outdoors has always been second nature for Smith. In school, he excelled at math and science, and he loved being outside. Starting at age 10, he would spend two months each summer at a military-style boys camp in New York’s Catskill Mountains, where he hiked, fished, and built fires to cook his supper. His passion for nature never diminished, but as he entered adulthood, he noticed fewer faces like his out exploring the wild.

“Outdoor Afro has enabled me to bring more people who look like me into the field.”

When Smith discovered Outdoor Afro, he admits that he was a little arrogant at first. Two years later, he applied for the co-leader position and was surprised to find the interview process so thorough and stringent: background checks, reference calls, a full review of his social media accounts. “I expected my years of outdoor experience to make me a shoo-in,” he says with a laugh. Then he gets serious: “They vetted me because we have to maintain members’ safety. We are engaging in activities that many black folks are interested in, but that they may not yet be familiar with. So leaders must be highly competent.”

By the first mile on the trail to Max Patch, Smith and his group experience some difficulties. Despite his earlier warnings to pack light — 30 pounds or less — every member of the group has overpacked and is struggling to carry the big loads up steadily increasing inclines. The hikers have stuffed their backpacks with sandwiches, heavy fruit, camp stoves, and Tupperware — not the dehydrated food Smith had recommended. “Lord, have mercy!” he admonishes good-naturedly. “You guys ignored everything I said.” One member, Tim Clemmons, ends up shouldering both his own pack and one belonging to a weakened hiker — a challenge he calls “humbling.”

Nicolzie Russell calls it a “learning experience.” Having served seven years in the Navy and 13 years in the Army, she is considered the thrill-seeker in her family. She once jumped off a pier in Antigua without quite knowing how to swim, and she learned to love snowboarding in Colorado. But Russell temporarily lost her taste for hiking and camping after her time in the military, where it was more work than recreation. When she discovered Outdoor Afro, she learned that poking around in the woods with like-minded friends could be fun and relaxing. “This is a great way to decompress and take in nature without worrying about anything,” she says.

It’s almost as though a reawakening has happened. Stereotypes notwithstanding, African-Americans have a long legacy of stewardship of the earth. But that history has been buried so deeply for so long that, even among black families and social groups, the information is seldom shared. Outdoor Afro excursions have gotten people talking about hiking, camping, and other environmental activities and issues; training for leadership positions in the organization; and becoming involved in conservation. 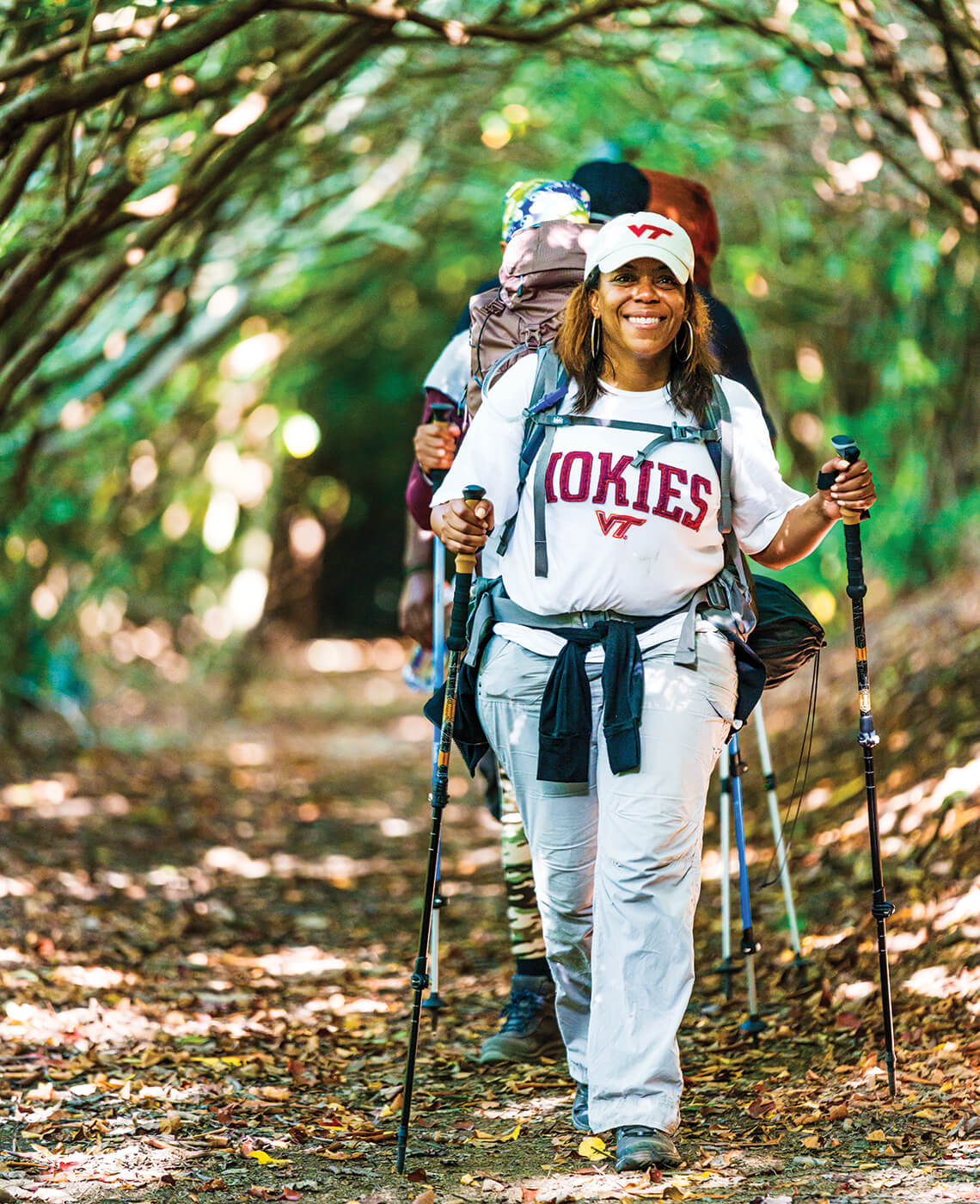 Backpacker Tianti Gardner confidently takes the lead under a canopy of trees on the Appalachian Trail between Lemon Gap and Max Patch. The trail runs next to the North Carolina-Tennessee border in Madison County. photograph by Thomas Moors

“Black people are associated with urban culture,” Smith says, “but cities are actually new to us. We navigated the outdoors for thousands of years and passed this knowledge down through our families.” Slavery and Jim Crow may have interrupted this legacy, but they didn’t stop it. “Most grandparents in the South hunted, fished, and worked the land,” Smith says. “Grandpa brought home a deer; Grandma grew those vegetables that are on the table. And this is just two or three generations ago.”

While on hikes, Smith encourages discussion of black history, of black figures like Harriet Tubman, who risked her life by hiking from Maryland to Pennsylvania to secure freedom for herself and others. “She wasn’t only liberating people; she was doing it in the dark by the stars,” Smith says. “I tell people this at night so they can appreciate how dark the woods are, and how proficient she was. Tubman navigated utilizing skills passed down through her family.”

Around the four-hour mark, Smith’s group runs into its biggest obstacle yet: a large, old oak tree, freshly fallen and completely blocking the already narrow mountain path. To the right is an embankment; to the left, a steep drop-off with little room to maneuver. There’s no choice: They have to scale the trunk. Smith goes first, stabbing his trekking pole into the embankment so that it functions as a handrail, then reaching back to pull up the next hiker. He remains encouraging: “Come on, everybody, we got this!” he cheers, as each hiker makes it to safety. But he later confesses, “My stress level went through the roof. There’s always the chance of something going wrong.”

Russell finds such experiences exhilarating. “The edge of the mountain, the obstacles, stepping over trees, and the possibility of sliding down the mountain if you misstep — it’s all very sobering,” she says. “But we trusted James.”

The big reward comes an hour later, when the group reaches the grassy, domed Max Patch bald shortly before sunset. Seeing the 360-degree views of the Appalachian Mountains and the night sky from 4,600 feet is life-changing. The trials of the day fade.

Far away from the noise of the city, Clemmons becomes philosophical: “Why haven’t I ever seen the Milky Way before?” And Smith answers: “Because Charlotte is only 750 feet above sea level, in a city with light pollution. You’re seeing, for the first time, what the sky really looks like.”