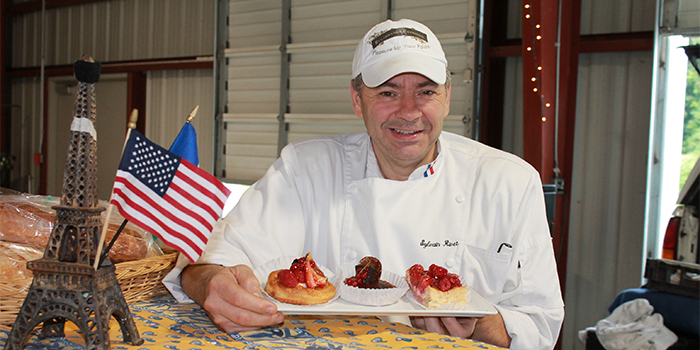 Chef Sylvain Rivet was born in Paris and traveled the world for his culinary career. It’s a long way from Paris to the Gastonia Farmers Market. But Rivet, now a Charlotte resident, is creating a loyal following at the market because of the French pastries and other baked goods he makes to sell there.

“He came over to visit, and when he came, he brought this huge box of pastries, and I thought, ‘This is just what Gastonia needs,’ ” says Carol Shrum, market manager. Shrum says Rivet has “a way with people” and takes time to explain ingredients to each customer.

Rivet has been selling items at the market since February. Almond croissants are one of his best sellers. Fried croissant doughnuts are new to his lineup. 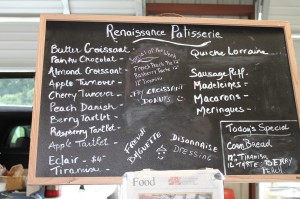 A chalkboard at the Gastonia Farmers Market lists items made by Sylvain Rivet, chef and owner of Renaissance Patisserie. photograph by Hope Yancey

“I want to create a destination,” Rivet says of his effort to introduce a little piece of France to Gastonia.

Rivet, 50, began cooking early as a chef’s apprentice from about age 13 to 18. His formal training was not in pastries, although he did learn the basics of baking.

Baking and pastries, however, have become favorite pursuits. “I like the precision,” Rivet says.

A few highlights of Rivet’s professional background include experience as a consultant for a catering company, as a culinary instructor teaching classical European cuisine and restaurant management, and as an executive chef.

“This is my paycheck,” he says of when former students thank him for motivating them to do their best.

Rivet once owned an award-winning restaurant, Amuse Bouche, in Simi Valley, California. In addition, he served as a private chef to celebrities, including members of entertainer Michael Jackson’s family. A framed photograph of Rivet with Oprah Winfrey, for whom he also has cooked, is displayed in his space at the market.

His career has taken him to Brazil, Japan, Mexico, Thailand, and numerous other locales. In fact, he met his wife, Jo-Anne, in Mexico while he was working and she was vacationing there from Los Angeles. 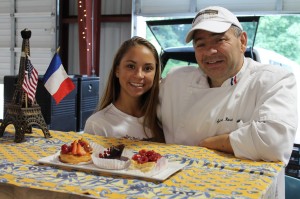 Rivet and his wife, who works in banking, moved to Charlotte two years ago from California. Their daughter, Jessica, is 14.

“She’s part of my business,” Rivet says of his daughter, helping him at the market on a recent day. But he notes that Jessica aspires to a future in the fashion industry.

There is a sense of community at the market, and Rivet likes it when people stop to say hello, even if they aren’t buying anything.

John Carroll of Rhodesdale Farm in Kings Mountain walks over to speak with Rivet. Carroll supplies the peaches Rivet uses in the summer, and Rivet baked him a memorable peach blackberry pie. The crust, Carroll declares, was “absolutely the best pie crust I’ve ever tasted.”

Preheat oven to 325° and arrange ramekins on a large-rimmed baking sheet.

In a medium saucepan, over moderately high heat, combine heavy cream and milk, 1/2 of the sugar, vanilla bean seeds and pod, and bring to a boil, stirring to dissolve sugar.

While heavy cream and milk are heating, combine egg yolks with remaining sugar and whisk. Gradually add about 1/3 of hot cream and milk to the yolks, whisking constantly. Then add remaining hot cream and milk, and stir to fully combine. Strain custard through a fine-mesh sieve into a clean container. Carefully ladle or pour custard into ramekins, filling them to the rim.

Place baking sheet in oven and carefully pour enough hot water into pan to come halfway up the sides of the ramekins. Bake until edges have set but center still jiggles when the ramekin is gently shaken, 20 to 25 minutes.

Remove ramekins from water bath and let cool on rack for 30 minutes. Then wrap individually and refrigerate for at least 3 hours.

To serve: Sprinkle top of each custard with a thin, even layer of brown sugar, using about 1 tablespoon per ramekin. Use kitchen blowtorch or broiler to evenly melt and caramelize sugar. Serve immediately.