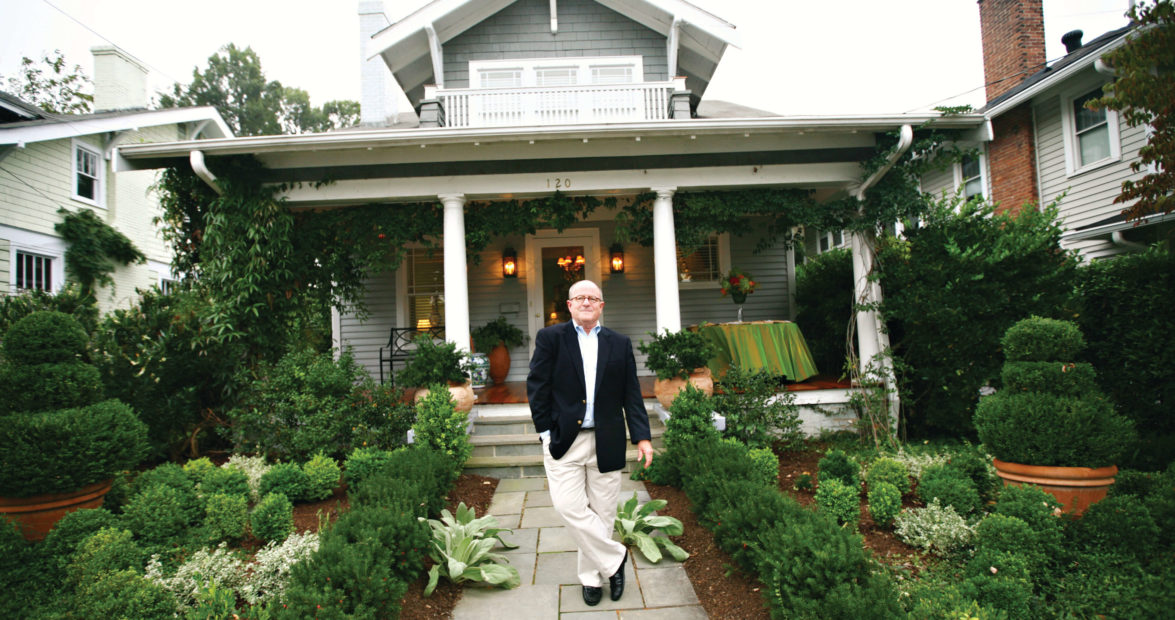 It happens in an instant. Garden designer Chip Callaway sees a garden in his mind. The space. The light. The plants. They all come together in Callaway’s sun-kissed head.

When that happens, he immediately starts moving. He waves his arms. He strides around in his Harry Potter specs and blue blazer and Bass Weejuns, showing you what will go where. The words tumble out.

Dennis Quaintance has seen it happen. He calls it the “I got it!” moment.

At that point, Quaintance knows, the best thing to do is to stand back.

“It’s like working with a chef. You don’t want to say, ‘What about this and that?’ You stay out of his way and let him cook. That’s when Chip’s cooking.”

Paul F. “Chip” Callaway’s leafy concoctions cover the East Coast. His gardens grow around private homes from Nantucket to Palm Beach, and around public venues from the Alexander Graham Bell House in Washington, D.C., to the Greensboro Historical Museum.

His work has wowed dignitaries both foreign and domestic — from Britain’s Prince Charles to North Carolina’s high sheriff, Andy Griffith.

A darling of the photosynthesis set, Callaway has even done gardens in England, a land fairly choked with green thumbs, but he remains firmly rooted in North Carolina. He operates out of side-by-side bungalows — one home, one office — in Greensboro’s historic Fisher Park.

His attachment goes back to his childhood in Mount Airy, where he and other kids sat up summer nights waiting for a neighbor’s night-blooming cactus to open.

“We sat there until our flashlight batteries burned out,” says Callaway.

Both sets of his grandparents lived on farms — one in Low Gap, the other in Flat Rock — and they introduced him to plants that seemed more animal than vegetable.

In the garden, he met snap dragons, foxglove, bleeding heart, and baby’s breath.

In the woods, he knew hearts-a-bustin’, lady slippers, and toad lilies.

Callaway was enchanted. He learned how to propagate his happiness. He ordered bare-root roses through newspaper ads and grew them in a pen where his dad, an oil distributor, once kept bird dogs. He took cuttings from boxwoods around the family’s home and plugged them into river bottom land where his family grew gladiola bulbs for a Dutch company. To keep the flowers from sapping the bulbs’ energy, he clipped the buds and sold them, along with his roses and boxwoods, to the proper ladies of Mount Airy.

He tarried on his way to Sunday school in hopes that an accomplished gardener named Will Merritt would invite him to work in his heavenly yard.

“I read a sign in a garden one time that said, ‘One’s nearer to God in a garden than anywhere on Earth,’ and I took that to heart,” says Callaway.

As a young man, Callaway strayed from the garden into a career in journalism. He had a flare for words, and writing seemed a more legitimate profession than gardening in those days, so he interned with several big newspapers during his college years and went to work for the Atlanta Journal-Constitution when he graduated from North Carolina State University.

He gravitated to home-and-garden stories, which kept him close to his bliss and exercised his knack for storytelling. But in time, he reverted to the garden. An interview with Atlanta landscape architect Dan Howard was an epiphany.

About half of Callaway’s work is in North Carolina. He has created about 500 gardens here, most for individuals’ homes. The work — especially around Cashiers, Highlands, Blowing Rock, and Roaring Gap — has been lucrative. His projects routinely ring up at six figures.

With a wink in his voice, he describes his typical client this way: “They’re into green on several levels.”

His big break came from a private client soon after Callaway earned a master’s degree in landscape architecture from NCSU.

Dick Jenrette — a Raleigh native, University of North Carolina at Chapel Hill alumnus, and founding partner of the Wall Street investment firm Donaldson, Lufkin & Jenrette — had just bought Ayr Mount, an old plantation house in Hillsborough, and he wanted to restore the gardens. He asked fellow preservationist Robert Stipe, a professor at NCSU, whom he should hire. Stipe recommended Callaway, who had written his thesis on the original gardens at a similar property right down the Eno River. Callaway got the job.

“It was like a benediction,” Callaway says. “It gave me instant credibility.”

Later, Callaway restored the grounds of Jenrette’s mansion on The Battery in Charleston, South Carolina, after Hurricane Hugo ravaged the house and garden in 1989. Britain’s Prince Charles was due to visit in a few weeks. Callaway moved heaven and lots of earth to restore the greenery to its previous state.

“Isn’t it wonderful you didn’t lose the lovely garden?” the Prince commented on a tour of the mansion.

In many ways, Callaway remains a writer, composing gardens the way he might compose a story: with an eye for impact, texture, juxtaposition, and underlying structure.

He talks about the need for editing plants, for revising as you go. He talks a lot, and smoothly, using his extensive vocabulary.

Like his gardens, he’s a blend of decorum and abandon. He might wear button-down shirts, but he also tosses off jokes and zingers with ease, which is part of the reason he’s a frequent lecturer at flower shows, garden club meetings, and symposia.

A man of the earth, yes; Mr. Greenjeans, no. And that appeals to clients.

“He’s able to be technically competent while being just ridiculously charming,” says Greensboro’s Quaintance, chief executive officer of Quaintance-Weaver Restaurants & Hotels. “He’s a hoot. You pay part of his fee for the garden design and part of it because he’s just so much fun to be around.”

Guests especially like the Don Rives Cloister Garden at the O. Henry.

“There’s a colonnade and an orangery at the end. It has all of this symmetry and rhythm and proportions — the Golden Mean sort of thing — but when you’re looking at the plantings, they’re organized in a disorganized way. … People will say, ‘I feel so comfortable here,’ ” Quaintance says.

The public can see another Callaway garden in the antebellum cemetery behind the Greensboro Historical Museum. Callaway teamed with Greensboro philanthropist and plant lover Jake Michel to refresh the graveyard, the burial place of former North Carolina Governor John Motley Morehead. Callaway insisted that the cemetery reflect its era.

“Graveyards were much more like botanical gardens in the 19th century,” he says. “They were really places of public pride.”

The three-year project, including tombstone restoration, cost about $100,000 and made the cemetery burst with life, especially around Easter, when it wears the pastels of camellias, daffodils, dogwoods, and phlox.

“It turned out very well,” says Michel. “It’s got everything under the sun.”

To Callaway, plants and history are intertwined. That goes for personal history, too. He loves to get heritage plants — plants linked to meaningful people.

He keeps ginger lilies, old camellia varieties, and cast-iron plants that were passed down from Elizabeth Lawrence, a North Carolina garden writer, through the women of the Wilson Garden Club.

He has crested irises and Cat’s Grave boxwoods from the late Burke Davis, a North Carolina Literary Hall of Famer and gardening aficionado.

He has a rare evergreen dogwood from J.C. Raulston, a famed horticulture professor and one of Callaway’s mentors at NCSU.

He has a redwood tree from William Lanier Hunt, a giant among Southern horticulturalists and namesake of the Hunt Arboretum in Chapel Hill. Hunt gave Callaway the redwood as a seedling in a Styrofoam coffee cup after the two discovered that Hunt’s sisters had once lived in Callaway’s home in Fisher Park. Hunt worked in the garden when he visited his sisters.

Hunt died in 1996, but Callaway thinks of him when he looks at the redwood — now 30 feet tall — and when the delicate pink lilies known as Naked Ladies bloom in the garden.

“He said he remembered planting them,” Callaway says.

The people-plants connection pops up again in Callaway’s work for the Andy Griffith museum and playhouse in Mount Airy. The buildings are across the street from where Callaway helped Will Merritt in his garden. They also hark to a tie between Callaway and Griffith, both Mount Airy natives.

When they first met, Callaway was about 5. He and a girl named Laurie Morefield rode in a convertible with Griffith during a parade in Mount Airy. Their picture was in the local paper. Callaway remembers nothing but the picture.

He met Griffith again several years later when Griffith visited a rehearsal of South Pacific at Mount Airy High School. Callaway was one of the male leads.

“He was very eager to talk about my dad because my dad had been his Sunday school teacher,” Callaway says.

Many years passed before he met Griffith again, at the dedication of Andy and Opie bronzes at the playhouse. Callaway had created a dry creek and garden around the life-size bronzes, which appear to be walking to a fishing hole.

About four years ago, Griffith asked Callaway — he calls him “Chipper” — if he would take on the grounds of his new Colonial Revival home in Manteo. The project took six months to design and install.

“It’s one of the best things I’ve ever done,” says Callaway. “It’s a series of garden vignettes that hook together into one landscape. It’s sort of my style. I love to do rooms that lead to other little rooms, places to sit and ponder.”

When Callaway ponders his career, he thinks he could not have been as successful anywhere but North Carolina.

He has history here, so much history that knowing what grows in the state’s three climate zones is second nature.

“I think all of my life, I’ve been trying to recreate the sense of awe and mystery and drama that I experienced when I would go into my grandparents’ gardens,” he says.

Sarah P. Duke Gardens
Duke University, Durham
There’s no admission to this privately supported gem in the heart of west campus. “The floral displays in the formal garden are unparalleled in North Carolina,” says Callaway. “Whenever you see wisteria blooming in North Carolina, get to the Sarah Duke Gardens.”
Call (919) 684-3698 or go to
hr.duke.edu/dukegardens
J.C. Raulston Arboretum
North Carolina State University, Raleigh
In Callaway’s perfect world, the arboretum would be the capital’s most visited site. “It’s an utter treasure,” he says. Also free to the public, this oasis is named for the late J.C. Raulston, a revered horticulture professor and mentor of Callaway. Raulston used the arboretum as a proving ground for plants he picked up on travels abroad. The research mission is ongoing. Revel in the color during a summer visit to the bedding plant area.
Call (919) 515-3132 or go to
ncsu.edu/jcraulstonarboretum/
Elizabethan Gardens
Manteo
To learn what thrives in briny air and sandy soils, get thee to the Elizabethan Gardens, a memorial to the first English colonists who set foot on North America, the “lost colonists” of Roanoke Island. The gardens are done in the style that was popular in England at the time.
Go to elizabethangardens.org, and look under “The Garden” and “Plants by Season” for pictures and descriptions of what’s in bloom.
Daniel Stowe Botanical Garden
Belmont
HGTV has named this place, just west of Charlotte, among the 20 great gardens in the country. Attractions include an orchid conservatory and tons of programs and classes. Through August 22, catch an exhibit called “Come Sit a Spell: Views of the Southern Garden,” featuring a giant sod sofa.
Call (704) 825-4490, or check dsbg.org.