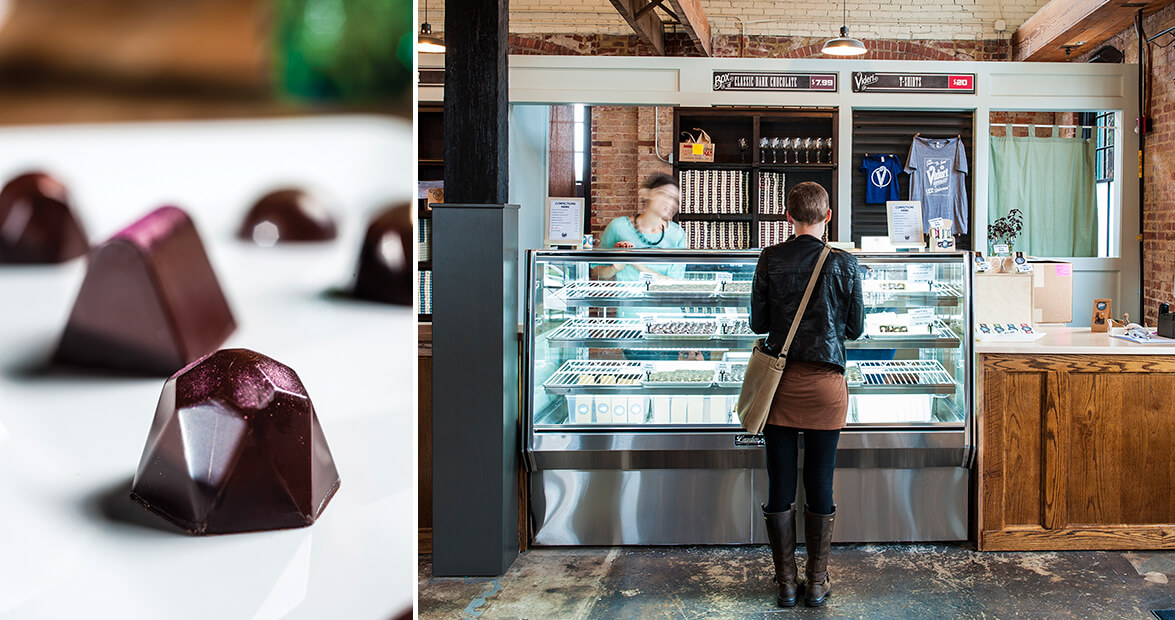 Inspired by culinary destinations such as San Francisco and Paris, chocolatier Casey Hickey likes to feature flavors from all around the world in her sweets. “You kind of get to travel with your taste buds but do it in a setting that’s not your typical candy shop,” Hickey says. Her shop’s name, Twenty Degrees Chocolates, acknowledges just how precious high-quality chocolate can be, as cacao trees grow only 20 degrees from the equator. But there’s no need to go to the ends of the earth for great chocolate — it can be found in the shop’s decadent truffles, such as black forest, raspberry chipotle, and pink champagne. Since Twenty Degrees Chocolate is housed within Petit Philippe, a wine shop owned by Hickey and her husband, be sure to also pick up a bottle of your favorite red or white while you’re there.

From Minneapolis to Costa Rica and then to Asheville, chocolate has taken Dan and Jael Rattigan on quite the journey. Before the couple got married and started operating an award-winning chocolate shop, they were two graduate students making truffles during a date early in their relationship. “I had kind of a little electric epiphany moment where I just realized chocolate was the path to my happiness,” Jael says. “I shared that with him. He kind of held me to task with that statement.” Having one another’s support, the two left school, bought a school bus, converted it into an eco-friendly RV, sold their belongings, and headed to Costa Rica where they bought a cacao bean farm. After opening a restaurant called Bread & Chocolate in a small Caribbean village, they later moved to Asheville where they would eventually open French Broad Chocolates. Throughout it all, the couple seeks to be intentional about bean sourcing and maintain the integrity of ingredients. “We’re trying to make a positive impact in our community as we were called to do so,” she says.

What started out as a hush-hush side job during a career crossroads, The Secret Chocolatier turned into a full-fledged family affair owned by pastry chef Bill Dietz, his wife Karen, their daughter Robin Ciordia, and her husband Andy. They make a point to treat you like family, so you won’t find any preservatives or additives in their chocolate. “You need to eat those truffles right away,” says Robin Ciordia. “They don’t last a year. They shouldn’t last a year.” The shop’s chocolate makes even the most strong-willed person weak in the knees, so consider the short shelf life a non-issue. The sea salt butter toffee is always a nice treat. Its dark chocolate shell complements its light crunch so well that “people get slightly addicted to it.” 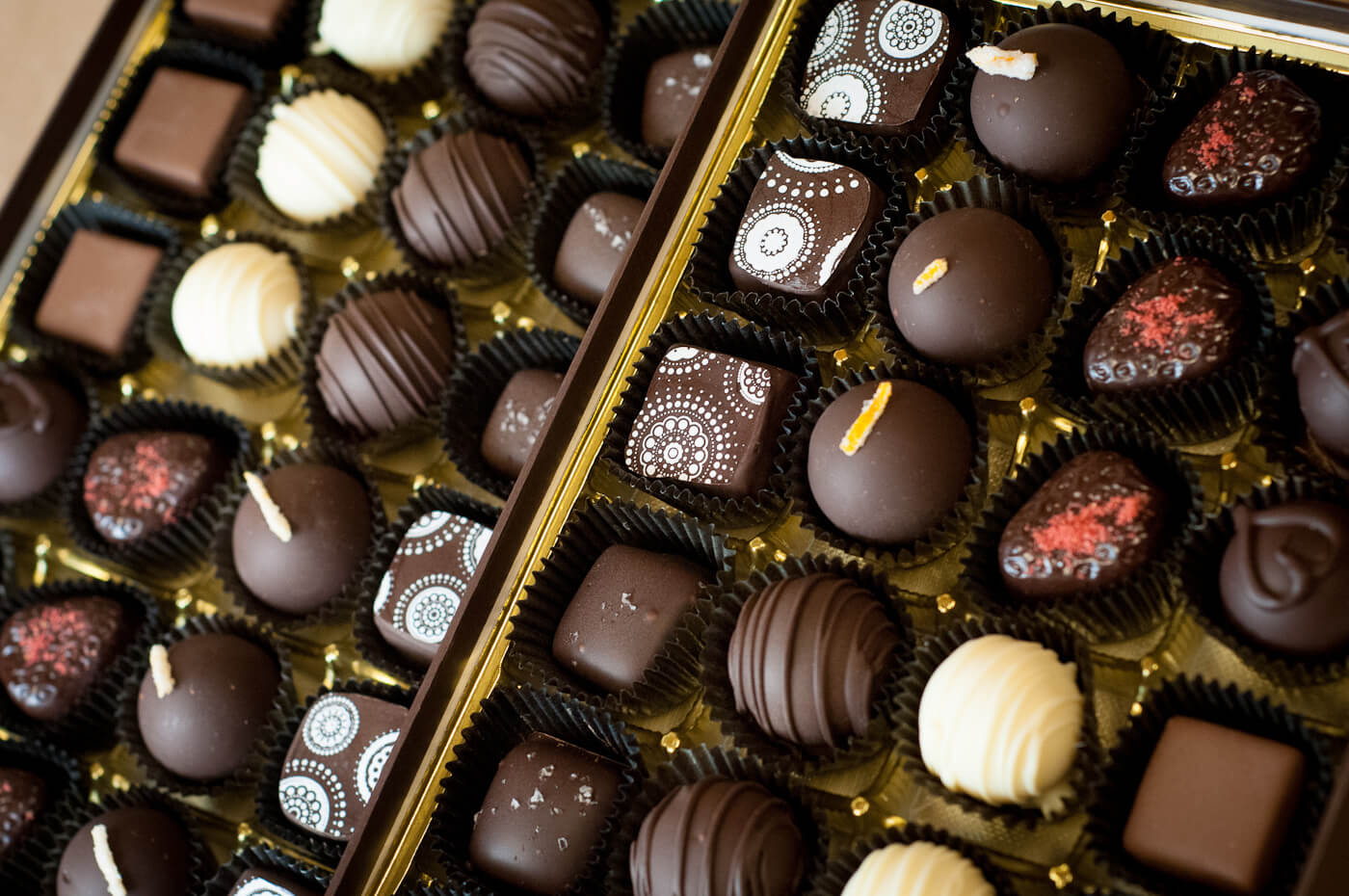 When Hallot Parson and his business partner Danielle Centeno opened shop in 2008, Escazú was one of the few bean-to-bar chocolate shops in the entire country. While the number of shops that source their own cacao beans is still small, Parson says building strong relationships with cacao farms has been rewarding and an important aspect to making great tasting chocolate. “The chocolate is only as good as the bean when you get it,” he says. In January 2015, Escazú was one of four N.C. chocolate shops that won Good Food Awards. French Broad Chocolates, Black Mountain Chocolate, and Videri Chocolate Factory were also recognized, indicating what might be a burgeoning chocolate scene in the state. “Being part of what is clearly a growing movement of artisan food in North Carolina is really exciting,” Parson adds. 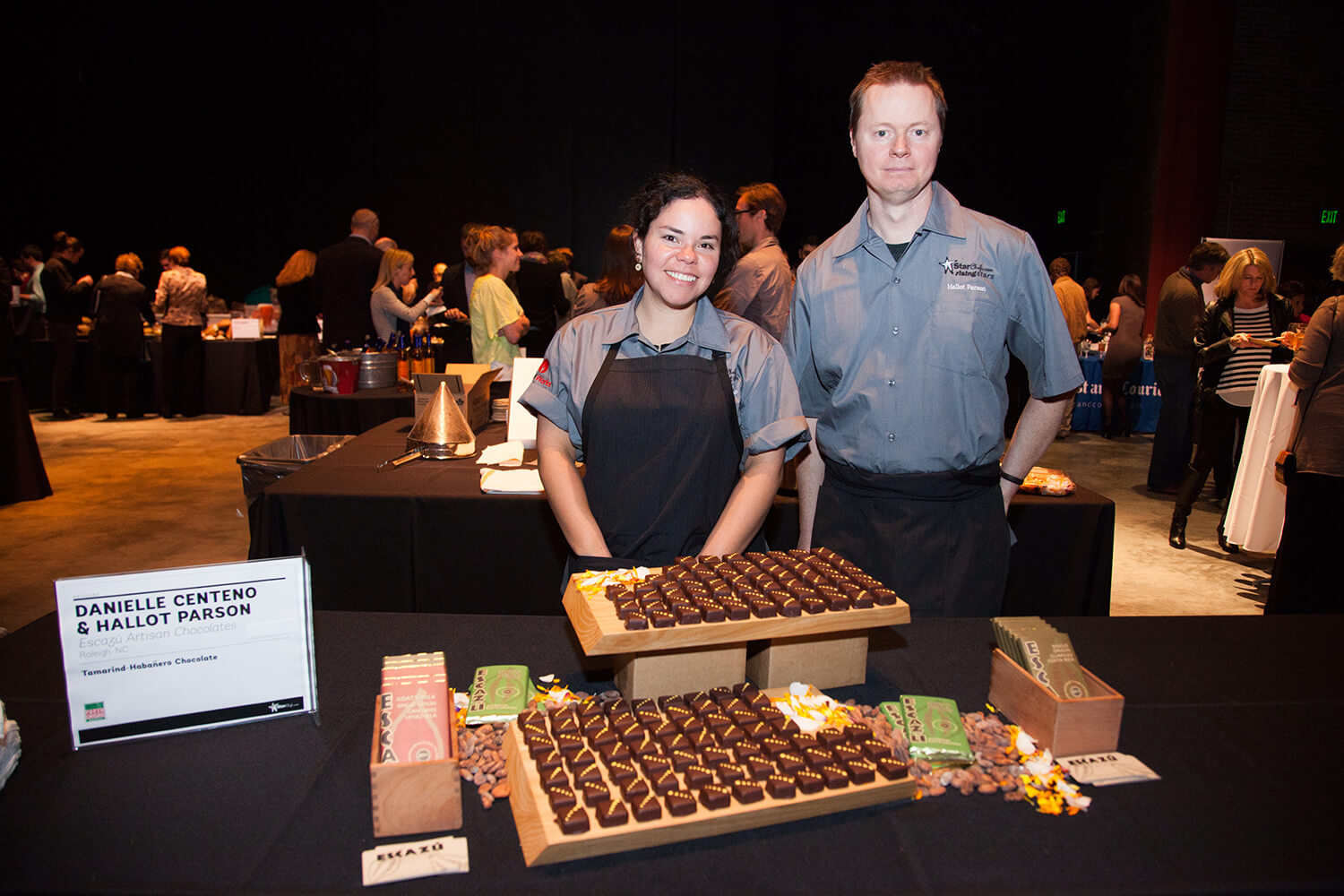 Had Lin McKay never broken his arm while playing Frisbee with his best friend, Mike Shafer, during a lunch break, barCHOCOLATE might have never come to be. Before the incident, McKay and Shafer had both been looking for an escape from their unfulfilling desk jobs and wanted to turn craftsmanship into a profession. But the question remained: What craft would they practice? They toyed with many ideas, including the possibility of going into airplane detailing industry, but their career path took a much sweeter turn. After McKay broke his arm, he spent the next month on the couch watching a good bit of television, when he saw an Anthony Bourdain special featuring a Spanish chocolatier. Then, as he describes it, “something just clicked.” The two went into business together, and they never looked back. “When we stumbled upon chocolate, I think the thing that was most surprising to me was how much I love it and how much I’m willing to invest in it,” says McKay. As for what it’s like to work with your best friend? “We always tell everybody we meet that you should never go into business with friends or family, but I say Mike and I are exceptions to the rule.” Their dynamic and fun-loving approach to business is apparent in their product. 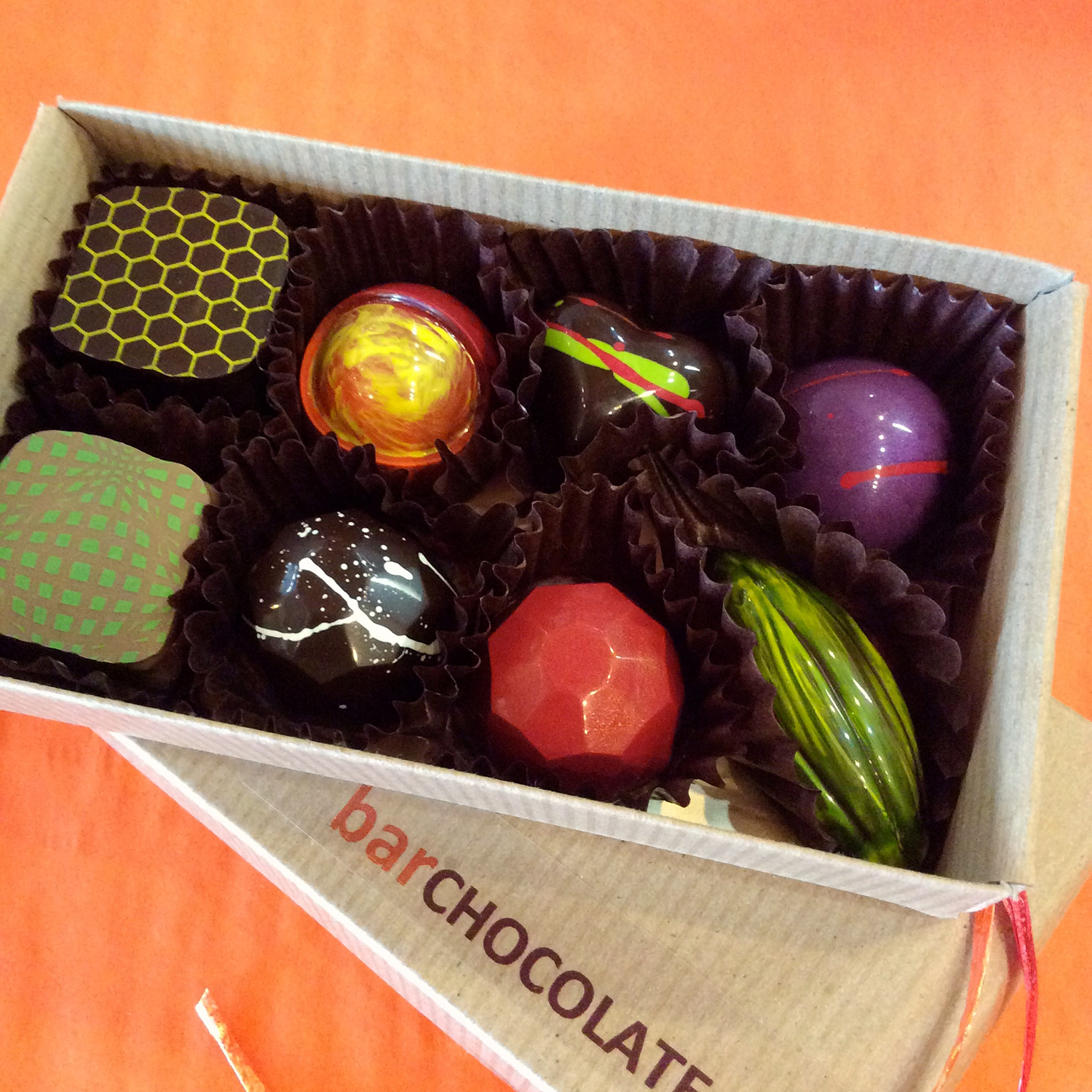 Starr Sink, co-CEO of Videri Chocolate Factory, thinks the shop should put a camera on the front door to record the reactions of customers who walk in. “They go ‘Ah, oh my God, it smells so good in here,’” Sink says. “Every single day, that is what I live for.” The bean-to-bar factory and shop makes a point to be transparent about its chocolate-making. The shop’s name is a tribute to North Carolina’s state motto: “Esse quam videri,” or “to be, rather than to seem.” The factory offers tours, and if you come at the right time, you might even get to taste a cacao bean as Sink’s husband, Sam Ratto, roasts them. After living in California for some time, Sink, who is a Winston-Salem native, is happy to find such a supportive — and thriving — chocolate community back in her home state. “It’s so nerdy and awesome,” she says. “And it’s so reinforcing to be around other people who dream about chocolate.” Dream about chocolate, the folks at Videri certainly do, and it shows in their flavors. 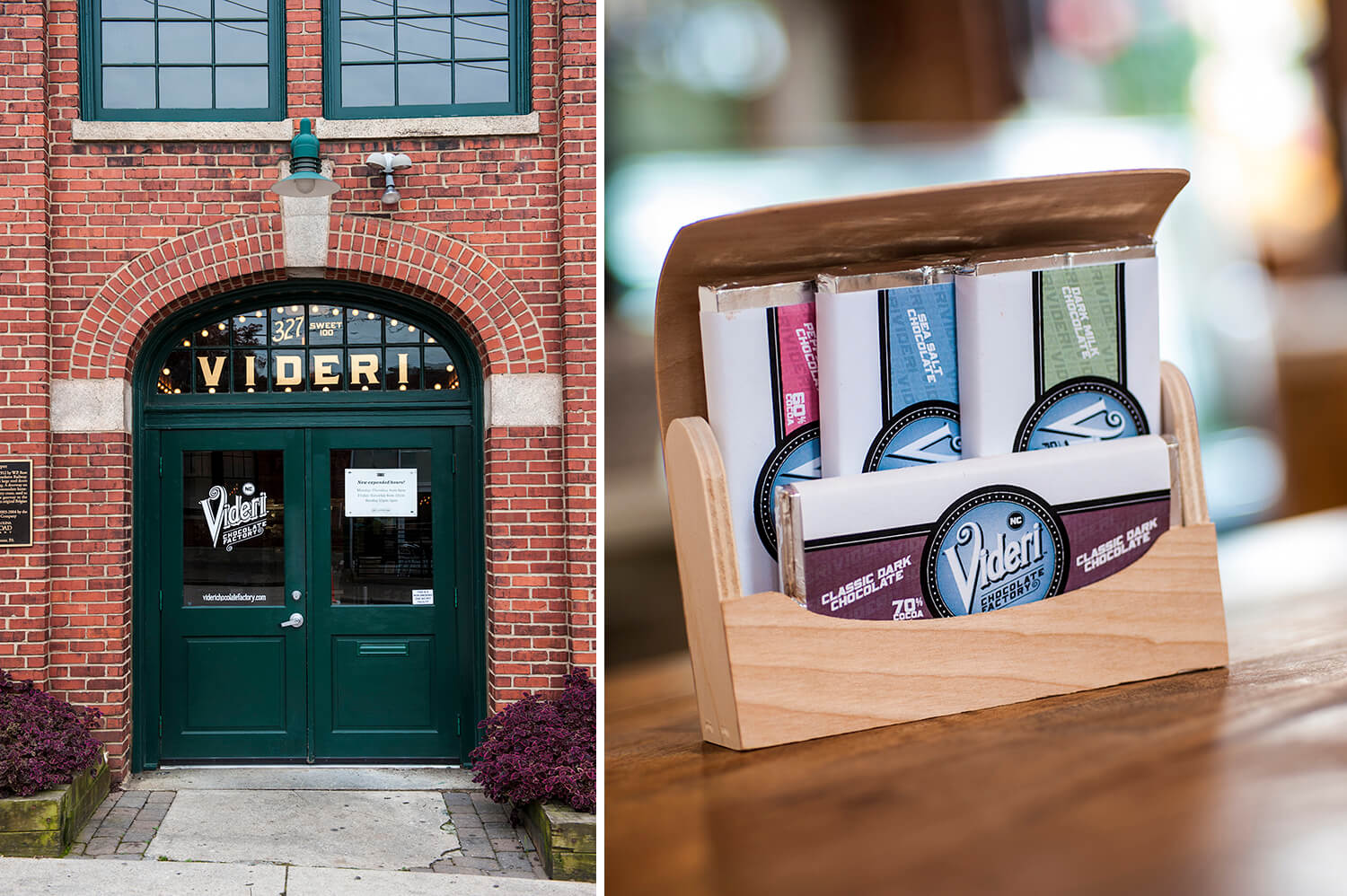 Make no mistake: Chocolate is never simply chocolate. “That is the equivalent of saying red wine is red wine,” says Brent Peters, chocolate maker at Black Mountain Chocolate Factory. Looking to do something that was more hands-on than his career as a lawyer, Peters thought back to when he worked at a chocolate shop to help pay his way through college. Realizing a passion for chocolate had been there all along, Peters and his wife opened up shop. “To have a product that we can point at, hold, share, and enjoy — that has been extremely rewarding,” says Peters. He loves to pass along his chocolate wisdom to others. Just drop in the factory for a behind-the-scenes tour and chocolate-making lessons. 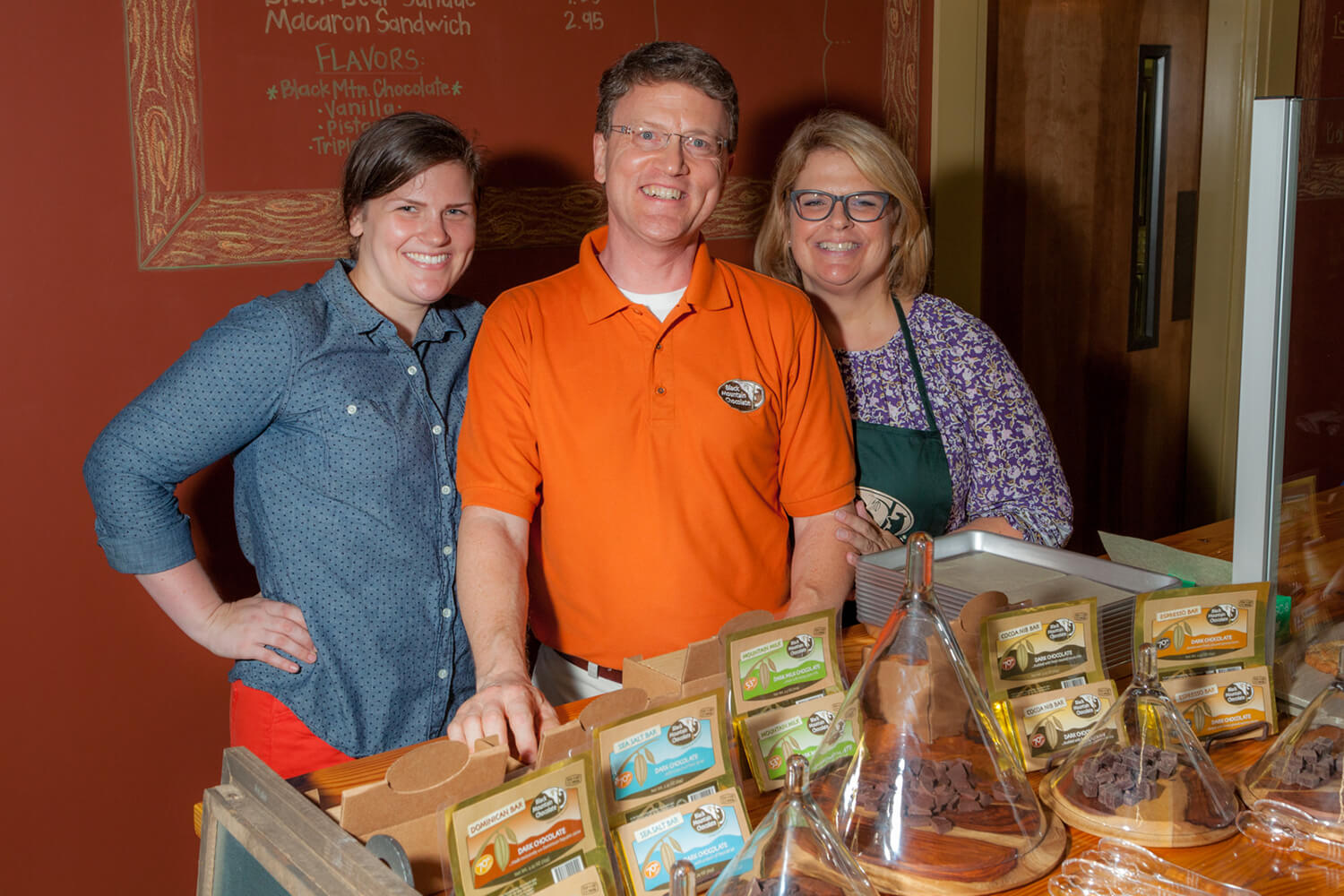 At The Chocolate Fetish, a family-owned shop, one of the most rewarding aspects of being a chocolatier is “providing people with little moments of happiness,” says general manager Elizabeth Foley. After her parents purchased the shop in 2001, Foley later joined the team full-time and has been using her background as an artist to create incredible chocolate sculptures ever since. For a one-of-a-kind gift, Foley suggests one of the shop’s playfully decorated high-heeled chocolate shoes. “Those are really fun. What woman doesn’t love chocolate and shoes?”

Matthew Shepherd never went to culinary school, but in turn, it’s allowed him greater freedom. “The lessons have been harder learned, more things thrown away,” he says. “But on the other hand, I’ve never had anybody teach me, ‘Don’t do that. That won’t work.’” The innovative chocolatier instead got his confectionary inspiration from an unlikely source: his professional background in perfumery. “It taught me how to layer flavor just like how you would layer fragrance with a perfume,” Shepherd says. With Matthew’s Chocolates use of natural oils instead of extracts, the shop’s sweets consist of nothing more than pure, unadulterated goodness.

Brasstown’s chocolate sophisticated and indulgent, but it’s fun, too. After all, it is chocolate we’re talking about. Owners Rom Still and Barbara Price have sourced cacao beans from different regions of the world to give each of their artisan chocolate bars a unique flavor. Try their Ecuador 75% bar, which won at the 2016 Good Food Awards.