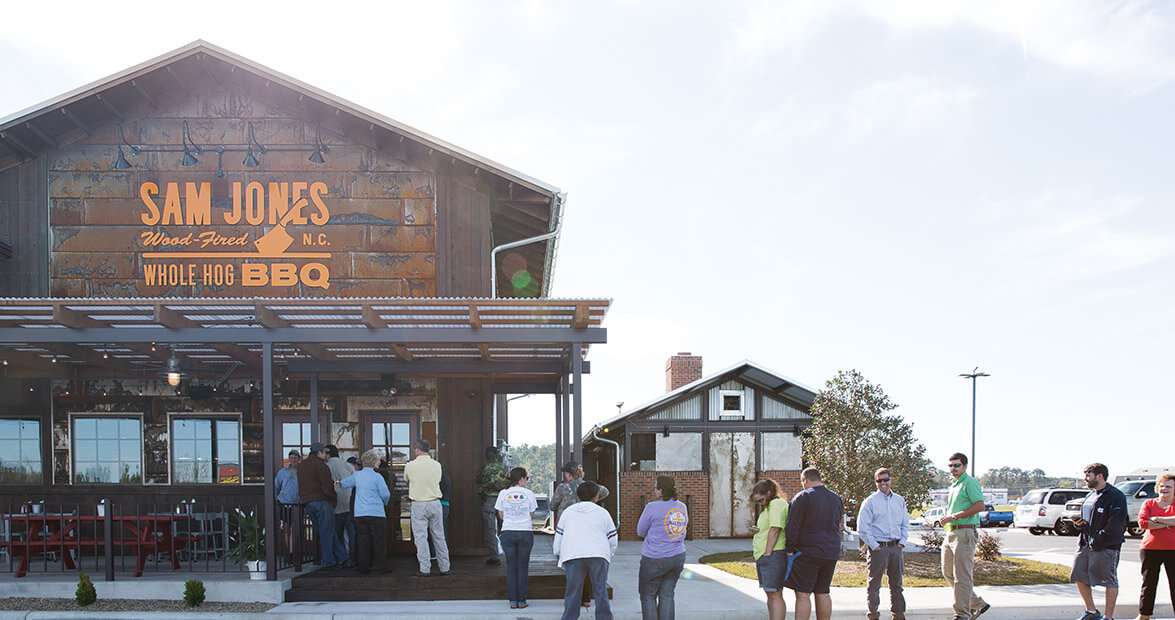 Sam Jones remembers the day down to the heat index: It’s 20 years go. He’s 14 years old, and he’s arm-deep in a bowl of coleslaw at his family’s legendary restaurant, Skylight Inn.

It’s a sweltering summer weekend in Ayden, an eastern North Carolina collard town that seems to have more ditches than people.

The Skylight, the barbecue bedrock that Sam’s grandfather, Pete, launched in 1947, is much the same as it was when it opened, an oblong brick structure off NC Highway 11 with a massive heap of split hickory dumped unceremoniously in the back.

The family’s hickory-smoked, eastern-style barbecue is mythical in this part of the state. And so is Sam’s grandfather, Walter B. Jones, or “Pete” to his friends and family. Pete is the “Mafia Don” of the Jones family’s small, but deep-rooted barbecue empire, a hard-bitten man with prominent cheeks, a thousand-yard scowl, and a stubborn streak to put a hog to shame.

A smokehouse, heavy with the scent of burned wood and meat, abuts the kitchen, where the air conditioner is wheezing in the heat. Family business can be a thankless enterprise. Longer hours, more work, and less pay. But there’s work to do, and this is a hardworking family.

A teenager, Sam is hesitant to stick with the business. One of Sam’s buddies talks about his plans to open a pawn and gun shop.

“You know you hate this job,” his friend says. “There’s a job there for you if you want it.”

“I hope the ol’ boy’s in heaven. And I hope that he’d look down and see that line to the door and be happy for us.”

“Man, when do I start?” Sam replies. “Is there air-conditioning?”

After high school, Sam did briefly leave the family business for a stint studying business administration at Pitt Community College in Winterville. But he came back. You can push family away, Sam says, but not for long.

Today, he’s clad in a black polo shirt, blue jeans, and boots. A slight man, Sam’s leaner than his grandfather but with the same round face and deep-set eyes.

When Pete died after a heart attack in 2006, by most accounts, Sam inherited a slumping business. Yet in the years since taking over the Skylight, he’s revitalized this barbecue bastion, earning it national attention, rave reviews, awards, and last year, expansion.

He’s opened a “spin-off” of Skylight Inn, simply named Sam Jones BBQ, in a shopping center on the outskirts of Greenville. The barbecued pork and chicken will remain the same, but Sam’s adding beer and wine.

Don’t ask Sam about the name of the restaurant. “I’m a low-key guy,” he grumbles, in a laconic drawl that’s made for delivering punch lines. “When I walk into a room, I don’t want people to know it. But the branding people, folks who are a lot smarter than me, say that should be the name.” 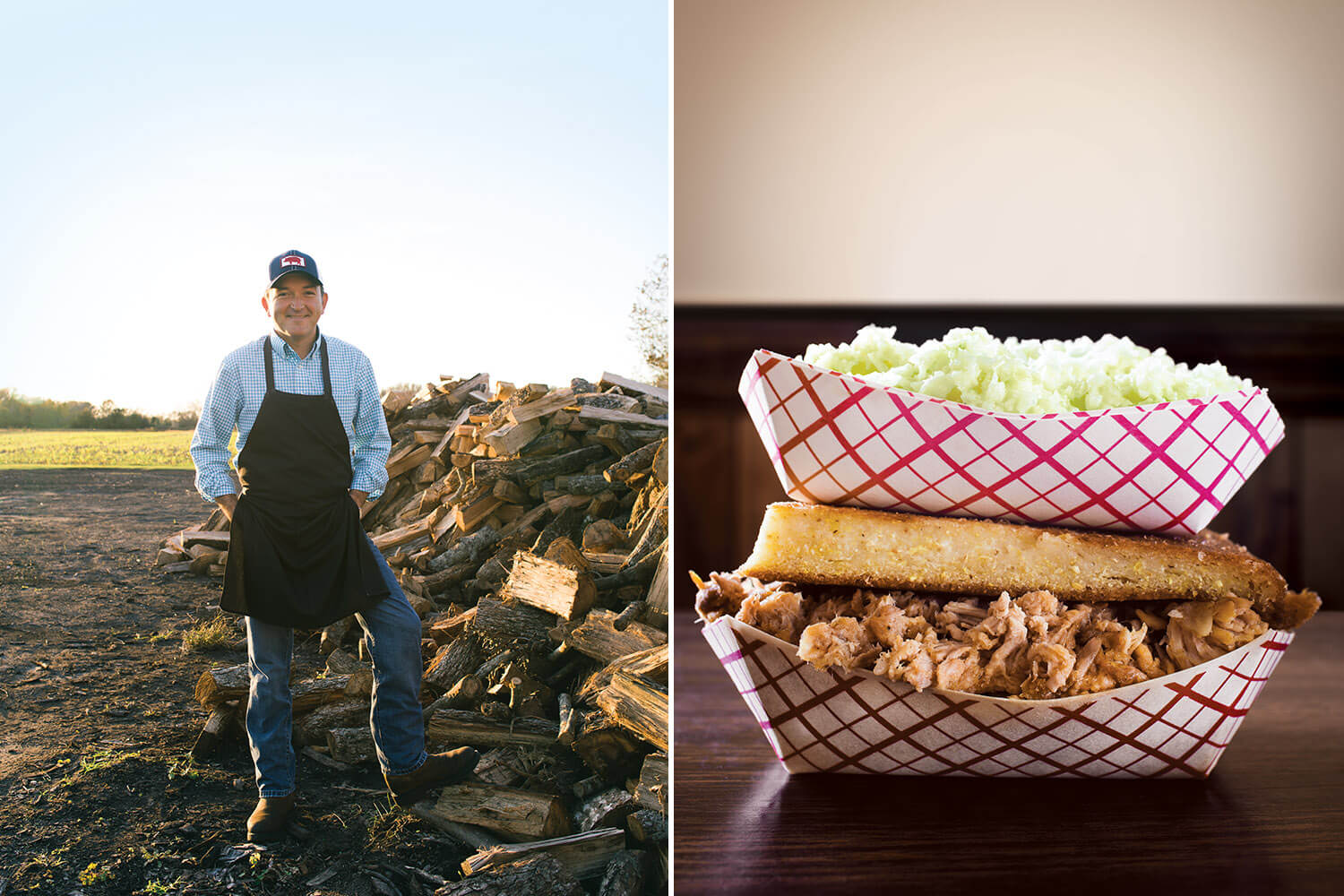 Sam Jones has reinvigorated Skylight Inn with a combination of innovation, like cooking higher-priced hogs, and tradition, like using strictly wood. The results of these hours of hard, hot work (right): a meal of barbecue, cornbread, and slaw. photograph by Johnny Autry

This isn’t a story about barbecue, but if it were, it would start like this: Jones family barbecue tastes old. Not old as in lacking freshness. Old as in classic, imbued with the hickory coals it was smoked over for nearly a day. Old as in the recipe hasn’t changed since Pete cooked it when he was 17.

It’s lightly seasoned. The vinegar-based sauce, dusted with black pepper, is best used as a dressing, not as a sauce. That way, you can taste the natural flavor of the pork.

Blistered and mixed within the meat, the hog’s skin is the single most divisive aspect of the Jones family’s barbecue, wedging connoisseurs firmly into two camps: those who love it, and those who hate it.

Served, of course, with coleslaw and a flat, heavy cornbread that’s more grit cake than anything else, the barbecue is a delicacy and a masterwork.

But this is a story about family, and most families are not perfect. There are bruised feelings. “My grandfather,” Sam says, “was not the type to say ‘thank you.’”

But there’s also a deep, hard-won respect for family. It’s a love that seems callused, sturdy, and cyclical in nature.

Shortly before his death, Pete pulled Sam aside. That night, for the first time, Pete taught someone else how to finish the books at Skylight. Within three months, it was Sam’s business to run.

Pete’s presence is still felt at Skylight today. Evidence of his accomplishments — the commendations from presidents, the scores of barbecue competitions won, and the myriad newspaper clippings and awards — adorn the walls.

In one prominently posted letter, North Carolina’s former agriculture commissioner Jim Graham thanks Pete for shellacking his mustard-loving competitors to the south during the 1981 BBQ Bowl in Washington, D.C.

“Frankly, I wonder what the South Carolina folks were thinking about when they agreed to compete with North Carolina chefs,” Graham taunts. “Obviously, they didn’t stand a chance, especially with you in the competition.”

Sam shies away from this kind of trash-talking. “I believe there’s a place for all kinds of barbecue,” he says diplomatically.

When Pete died, Skylight’s customers were shaken. Business plunged. Sam was reluctant to continue the tradition, but allowing his family’s barbecue name to die with his grandfather was something that Sam just couldn’t abide.

“That would be giving up conquered ground,” he says.

So Sam began cooking higher-priced hogs, and although the restaurant’s low prices inched upward, the changes sparked a second life for Skylight Inn.

These small improvements also brought renewed attention, features on the Travel Channel and the Food Network, guest spots in culinary conferences across the country, and heaps of awards, including a medal from the James Beard Foundation, tantamount to an Academy Award in cooking.

To think that barbecue, for years, “was in the armpit of the culinary world,” Sam says.

All of this, from a family that lived in poverty for decades, in a shambling little town on eastern North Carolina’s coastal plain. 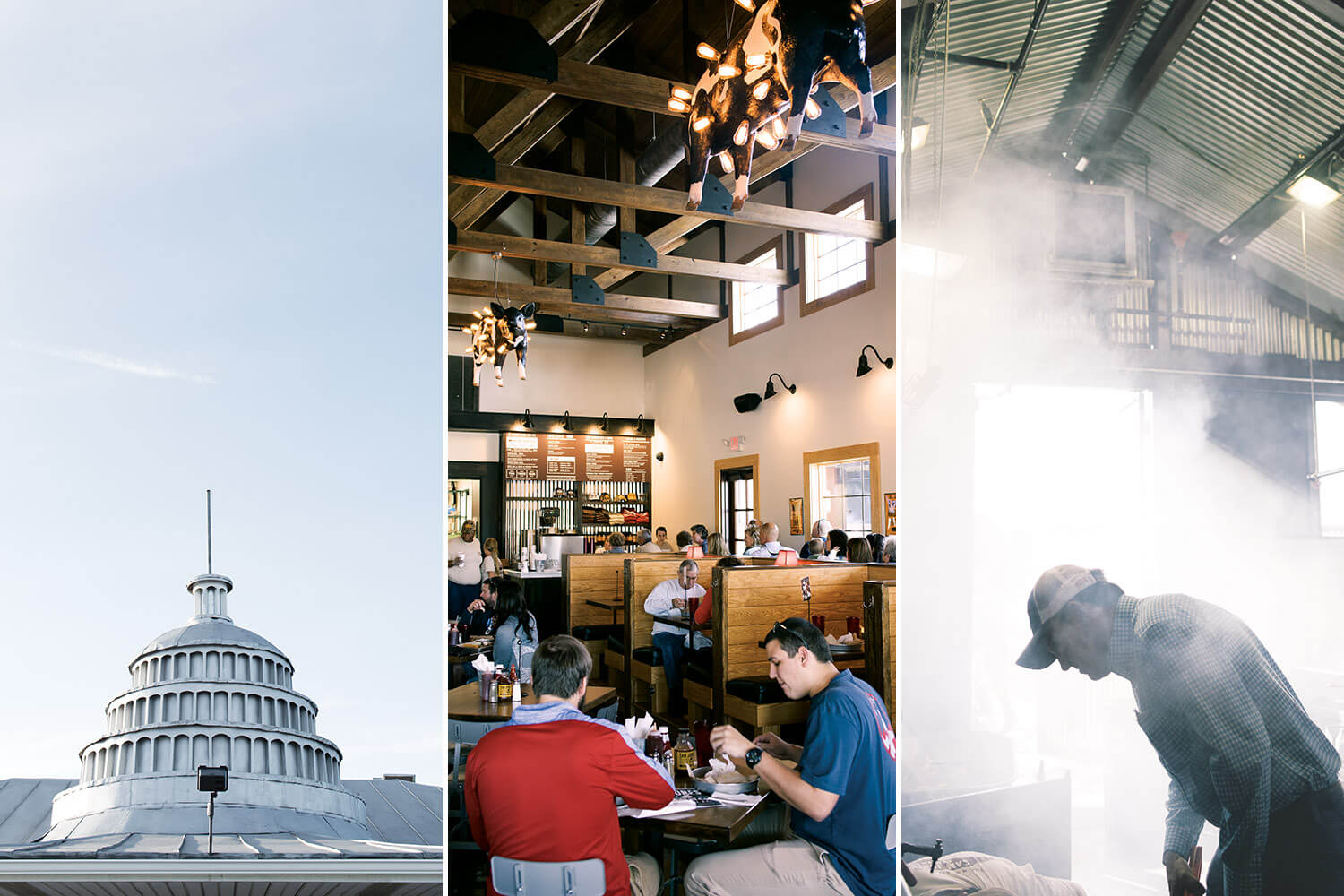 The dome of the Skylight Inn (left) is a beacon for barbecue lovers. photograph by Johnny Autry

Here we are on a chilly day at Skylight Inn, with its rooftop dome that beckons barbecue lovers from as far as hundreds of miles away.

“Skylight’s a destination,” Sam says. “And we’re not near anywhere.”

Nonetheless, the restaurant teems with people — some wearing blue jeans and T-shirts, others in suits and ties —all of them waiting in a line that coils to the back door. Never mind that outside, rain falls in cold sheets. Skylight Inn is weatherproof.

By the counter, Sam talks with a customer who is wearing a red-checkered button-up, blue jeans, and boots. “Glad to hear you’re expanding,” the customer says.

Despite the compliment, Sam’s not sure what old Pete would think. Pete disdained change. He staunchly opposed installing a fountain soda machine in Skylight, preferring bottled sodas instead.

What would he think of Sam Jones BBQ, with the sprawling bar and the  hog light fixtures, ribbed with lightbulbs, hanging from the ceiling?

“I hope the ol’ boy’s in heaven,” Sam says. “And I hope that he’d look down and see that line to the door and be happy for us.”