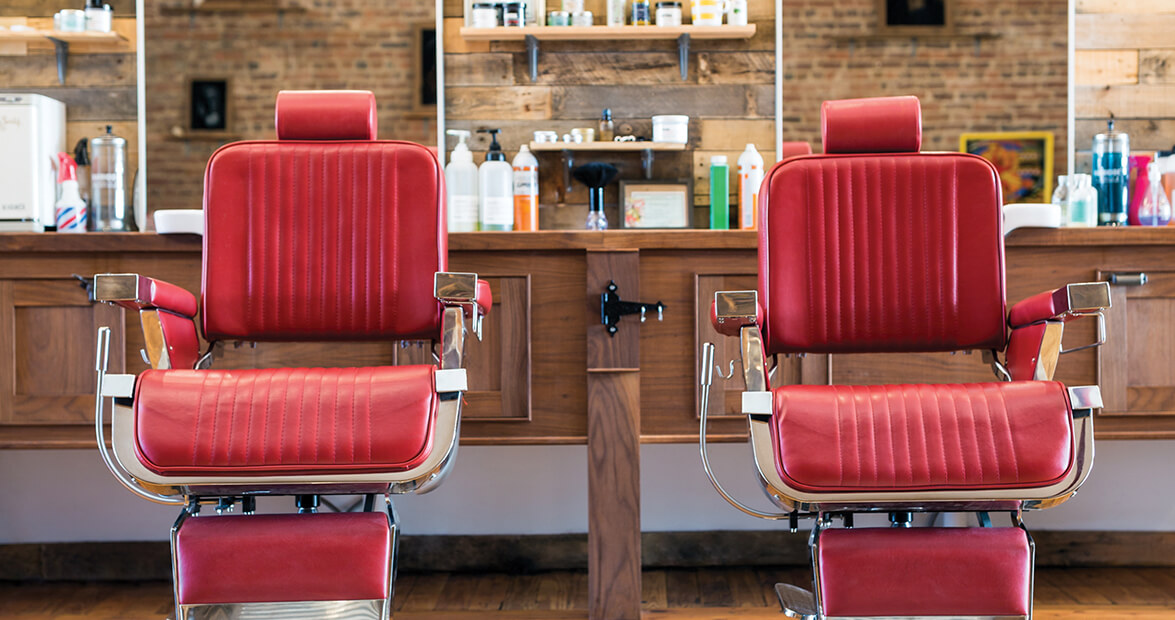 If you’re a parent, admit it: Somewhere, you have an envelope of fine locks gathered from the linoleum floor underneath a barbershop or beauty parlor chair, where your child sat on a padded board balanced on the armrests and got their first haircut.

My mother cut my hair until I was 6, a battle of wills and squirms that left me with the occasional scissor-slip scab. For my first-grade haircut, I went to the Bon Ton, on Main Street in Rutherfordton. The Bon Ton was an old, brick, two-story building that had once been the county jail; supposedly, the ghost of a hanged inmate still loitered around — I mean haunted — the basement.

The ghost didn’t worry me as much as the plastic full-body tent that Miss Mattie snapped around my neck before raising the swivel chair — thump, thump — with a herky-jerky foot pump. The counter was crowded with canisters of Aqua Net hairspray; a cylinder of mysteriously blue Barbicide, black combs sticking out like straws in a milkshake; scissors drying on a towel. Above, fluorescent lights buzzed like insects. Pastel posters on the walls featured models showing off hairstyles and smiling beatifically. Not me. Afterward, invisible millimeters of hair were left behind. Going to the beauty parlor simply meant trading neck nicks for neck itch.

I envied the boys who came to school with new barbershop crew cuts. The fuzz, 90 degrees straight up from a pale scalp and even as rug nap, begged to be grazed by a palm. Crew cuts were a sign of spring, like baseball. Later, the style wasn’t as charming on my middlest: His was an accidental crew cut. “About a half-inch,” he told his barber, and that’s what he wound up with: a half-inch of hair. As opposed to the oldest, who, as a high school junior, sat down in the barbershop chair, requested a “No. 0,” and got that, too: shorn. To support a friend undergoing chemotherapy, he’d elected to be bald. I cried, not because of his pea head, but at the thoughtfulness behind his intentional hairlessness.

These days, you may have to look harder to find them, but barbershops and beauty parlors still exist, with names like “Kut ’n’ Kurl” instead of “Chop” and other scary-sounding places in big cities. The former are beauty parlors, and the latter are salons, and their differences go way beyond rural and urban.

Salons are non-gender-specific. Beauty parlors, though, focus mainly on women, and barbershops on men. I’ve never seen a red-white-and-blue pole outside of a beauty parlor, and I’ve never seen one of those mammoth, hoodlike hair dryers, where you disappear to your nostrils, in a barbershop. Beauty parlors stand alone, or are found inside of someone’s house. A barbershop, though, nearly always has a sidewalk outside. Men didn’t go into the Steel Magnolias beauty parlor — though, come to think of it, Dorothy and the Cowardly Lion did get their curls re-ringletted at the same beauty parlor. Still. That was the Emerald City, not the South.

Women of earlier generations had weekly, set-in-stone appointments to get their hair done, and that’s just how it was termed, too: “getting my hair done.” Nowadays, you get a “blowout,” which has nothing to do with tires.

I don’t miss pin curls, those red stripes left on cheeks by slept-in bobby pins. But I do miss that beauty parlor smell, of something slightly singed mixed with eye-watering chemicals, the humid musk of hair and skin, the sweet florals and fruits of shampoos — a collection of scents, somehow intimate, that was yesterday’s aromatherapy.

Barbershops and Bon Tons are out there, surviving and styling. Look for the revolving stripes. Look for the signs that say “Kut” instead of “Cut.” Look for “Walk-Ins Welcome.”