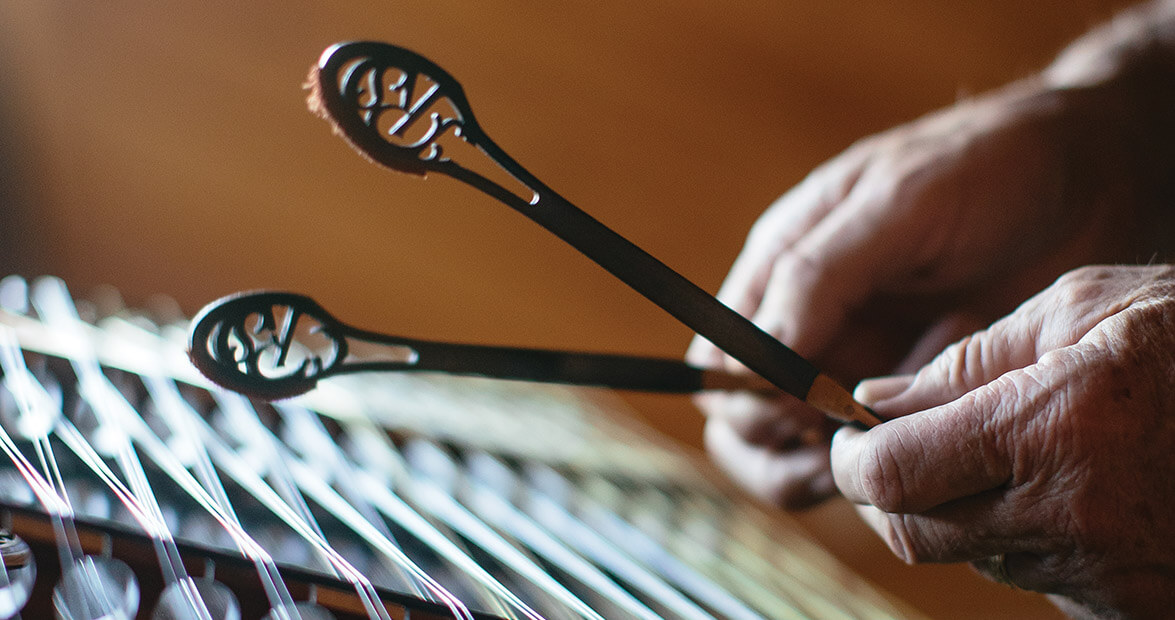 There I am, a college sophomore on spring break, ambling along the midway of the Union Grove Fiddlers Convention in Iredell County, when I hear the strains of a tune I recognize but don’t know the name of. I follow the sound, softer than that of a harpsichord, percussive but melodic, the notes tripping over each other and lingering in the air.

I turn the corner of a tent and see a pretty young woman standing before a trapezoidal wooden box of an instrument, tapping it with bent sticks — hammers — held in each hand. She smiles at me and keeps playing, hammering the doubled courses of strings by muscle memory, her hands quick and nimble. It’s the first time I’ve ever seen a hammered dulcimer. Before I can even ask, she names the song: “Garryowen.”

I listen for as long as she keeps playing. It occurs to me then that if I could ever play that song on that instrument as well as she can, I would know something like joy.

“Garryowen” is an old Irish quickstep that dates back to the late 1700s, from near Limerick, and its lyrics celebrate the drunken antics of the local miscreants. Legend has it that an Irish trooper was playing the tune on a tin whistle as Gen. George Armstrong Custer’s cavalry rode into the valley of the Little Bighorn.

I think no more about hammered dulcimers or that tune until many years later, when my wife, Jill; my stepson, Patrick; and I rent a cabin up a winding dirt track on a remote ridge. The closest town is Black Mountain, 15 miles east of Asheville. One afternoon, we wander into Black Mountain’s visitor center and spy hanging on the wall an exquisite hammered dulcimer, made by an artisan named Jerry Read Smith. Smith started making dulcimers of all kinds four decades ago, and has helped establish the Black Mountain-Asheville area as a kind of hammered dulcimer haven.

Down the street from the visitor center, at Song of the Wood, Smith’s showroom full of gorgeous instruments built from curly maple, Sitka spruce, tulip poplar, and black maple, I can’t resist picking up a pair of hammers — surprisingly light — and tapping some strings. The hammered dulcimer is tuned in fifths, which makes it easy to find a chromatic scale and a simple melody.

Strangely enough, the hammered dulcimer was not born in the mountains. It has its origins in ancient Greece and the Near East, found its way to Europe with returning Crusaders as early as 900 AD, and was adapted to the dance repertoire of the British Isles.

The hammered dulcimer is versatile, able to sound classical pieces and folk melodies. More portable than a piano, it crossed the Atlantic and traveled to the mountains, and by the 1800s had become a familiar sight in lumber camps. It fit in with the musical traditions of the Scotch-Irish who settled the mountains — perfect for jigs and reels, for setting a percussive rhythm under fiddle tunes. It sounds mountainy.

Not far from town, world-class dulcimer virtuosos like Joshua Messick (whom I meet playing on the street outside of Song of the Wood) perform at Perelandra — Smith’s hand-built concert hall. The stage backdrop is a bank of tall windows that look out into the misty Blue Ridge. The studio itself is a musical instrument.

I leave Song of the Wood carrying a dulcimer of my own, with 20 courses of strings across two bridges. Back at our hideaway cabin, I set it up and hammer away. And before too long I can pick out the jaunty melody of “Garryowen.”

Halting at first, then trotting, and at last galloping for joy.