Take Mike and Theresa Lowe. Though they dated all through high school, when he asked if she’d marry him, Theresa wanted to think about it overnight. “I didn’t know if I knew what love was or not,” she says. The next morning, Mike called her on the phone. “Did you decide?” he asked. “Well,” Theresa said, “I reckon I will.” After 45 years of marriage, here they are, ribbing each other about who remembers the story better. 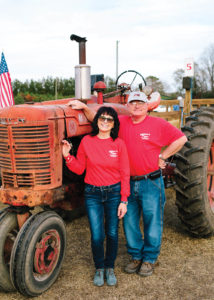 A few years later, the same sort of don’t-know-what-you-don’t-know-’til-you-act situation presented itself to the pair of lifelong Onslow Countians. Mike was working at DuPont and Theresa was working at the airport when Mike “got the notion to come back and stir the dirt again,” he says. As a boy, he’d worked his father’s tobacco farm in the Back Swamp community near Richlands, and he just plain liked farming and “the smell of dirt.” He planted some corn and beans on the family land, and Theresa hatched the idea to make a few extra dollars with a Christmas tree crop. Yes, in Onslow County, not on the high-elevation slopes of western North Carolina. “We grew Virginia pines,” Mike says, and shakes his head. “Aggravating trees. Pretty, but they tend to lean. We didn’t even think about how we’d sell them and didn’t know the Nantucket pine tip moth loves them either.”

Every evening after their regular workday, Mike and Theresa would “walk the trees.” While his pals spent their days off hunting and fishing, Mike was spraying, shearing, and fertilizing. “I just wanted to be here,” he says. Theresa, meanwhile, was in the treetops. Literally. To trim them, she learned to walk on drywall stilts.

Mike built some furniture and Theresa fashioned some Christmas ornaments for a small gift shop, and they “opened on a whim” the Saturday before Thanksgiving in 1986. People came. “You know,” Mike says wonderingly, “it did well.” In 1990, more than 1,400 trees sold, and “that was when we realized how important the military is.” In nearby Jacksonville, Marines were deploying to Desert Storm, and having a Christmas tree was vital to families back at Camp Lejeune. “We ran out of trees,” Mike says, but the pair were already old hands at making things work: “We’d take the bottom of a Virginia pine, drill a hole in the trunk, and put the top of a white pine in it to make a full tree.”

The labor necessary to succeed was so enormous that the couple was faced with a decision: keep their jobs, or cultivate Christmas trees full time? Mike left DuPont in 1991, “and we still didn’t know what we were doing,” he said. “People thought we were crazy to make a living just on trees.” Maybe for good reason. A very pregnant Theresa was trimming treetops when her water broke. Unable to locate Mike on the farm, she drove herself to the hospital to deliver their daughter Caitlin. And, on the way, she stopped at the florist to order herself two dozen pink roses. Some nights, they worked until dawn, sawing holes in walls at 2 a.m. to enlarge the gift shop. A theme developed: When a need arises, handle it yourself.

Trees were fine for the winter season, but “we needed money to run through our fingers the rest of the year, too,” Theresa says, so she put in strawberry plants. Apple trees came next — 300 of them. Decades on, “we have one left,” Mike says. “They’re not so happy here; blight got them. We were stupid that way.” You have to admire their determination, though, their gumption to keep on keeping on. And when you’ve got strawberries and apples, and two or three acres of pumpkins, and you love experimenting in the kitchen, as Theresa does, you might as well make some strawberry jelly and apple butter and pumpkin pies to sell. (And still: “We didn’t know what we were doing,” Theresa says. “Those first years we bought pumpkins from Iowa. That’s the road we had to go down to get here.”) Jelly in the gift shop was fine, but other sweet goods required a bona fide bakery, which came along in 1994. 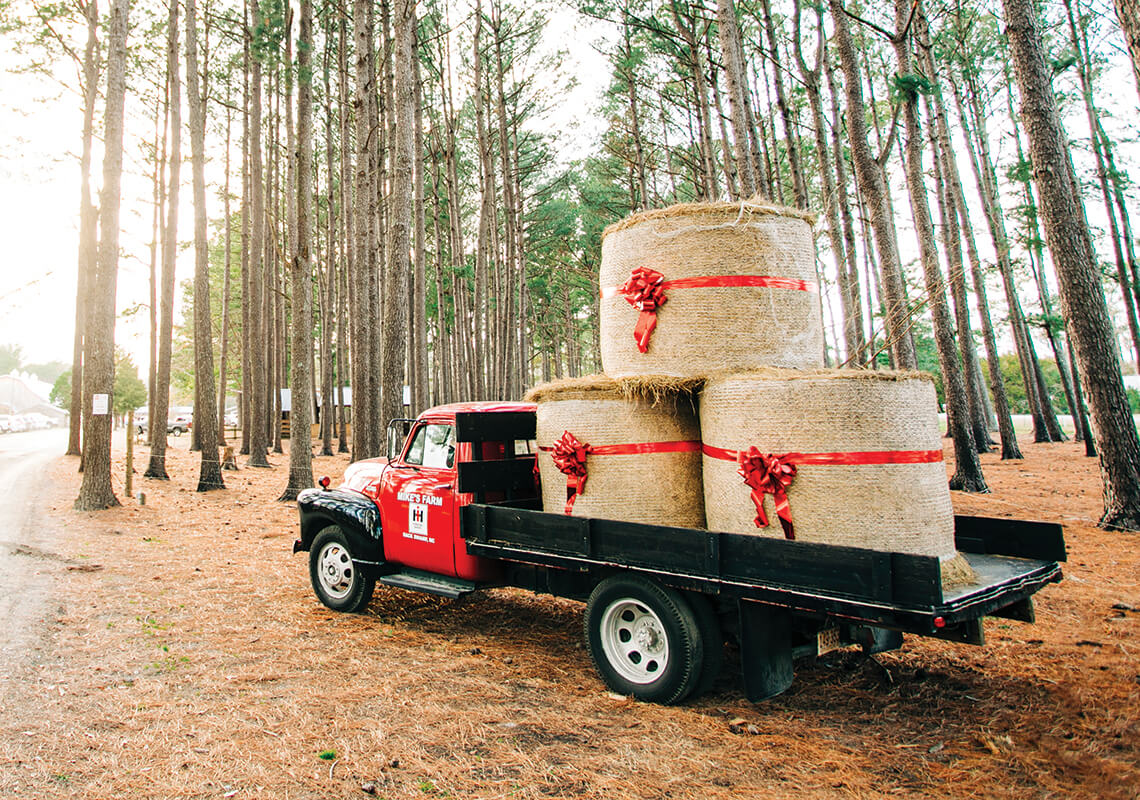 Then, five years later — “Why did we build the restaurant?” Mike rhetorically asks. “Because I wanted to,” Theresa says. And because with school groups visiting the pumpkin patch, and folks taking hayrides, and families making the farm a Christmas tradition, people got hungry and started asking whereabouts they could find a bite to eat. And when the restaurant began to have to turn away overflow crowds, they first doubled the size of the dining room and then, in 2002, added the Banquet Room for additional seating.

Wouldn’t you know that couples began asking if they could have their wedding receptions at Mike’s Farm? So up went The Barn, reached by curving walkways, welcoming with grapevine-and-burlap wreaths on the doors, to accommodate 200 in its warm, wooden interior. Later, lovebirds wanted to have their wedding ceremonies on the grounds, and here came The Deck, an intimate outdoor space secreted within vines and pines and magnolias.

Soon, Mike’s Farm found that it had become one of Onslow County’s top attractions.

To show their appreciation for all of North Carolina, the Lowes decided to give the rest of the state a say somewhere. Enter the most recent addition to the farm, the North Carolina Products Barn, built in 2019, that features handmade goods representing all of the state’s 100 counties so you can “shop local” from Alamance to Yancey while standing in Onslow. In the light-filled expanse beneath a restored Farmall tractor displayed high in the loft, vintage pie safes and hutches and chests hold oyster shuckers, salsas, cornmeal, muscadine juice, jewelry, peanuts, pottery, pillows, pipes, photography, soaps, socks, hand carved pens, handloomed throws, hand-tooled leathers, and hand-lettered cards. At one end of the barn, sample North Carolina wines; at the other, sip artisanal coffee with a piece of fudge in every flavor and color at a counter created especially by Artisan Leaf in Wilson.

Yet that’s just the bare-bones, dirt-to-barns origin story of Mike’s Farm. Every endeavor, every addition, bears the stamp of Mike and Theresa’s devotion to detail and constant, hands-on work. Walking through the bakery, Theresa stops to straighten a canister, stoops to retrieve a speck of trash. Behind the counter, Mike’s sister rolls her eyes at a perfectionism she’s come to expect. She manages the bakery that sells Mike’s Farm’s signature 10-layer cakes, a confection of thin layers covered in scratch-made icing so gorgeously drippy, so generously pooled on the platter, that it’s no wonder the family sells hundreds in a single holiday season. 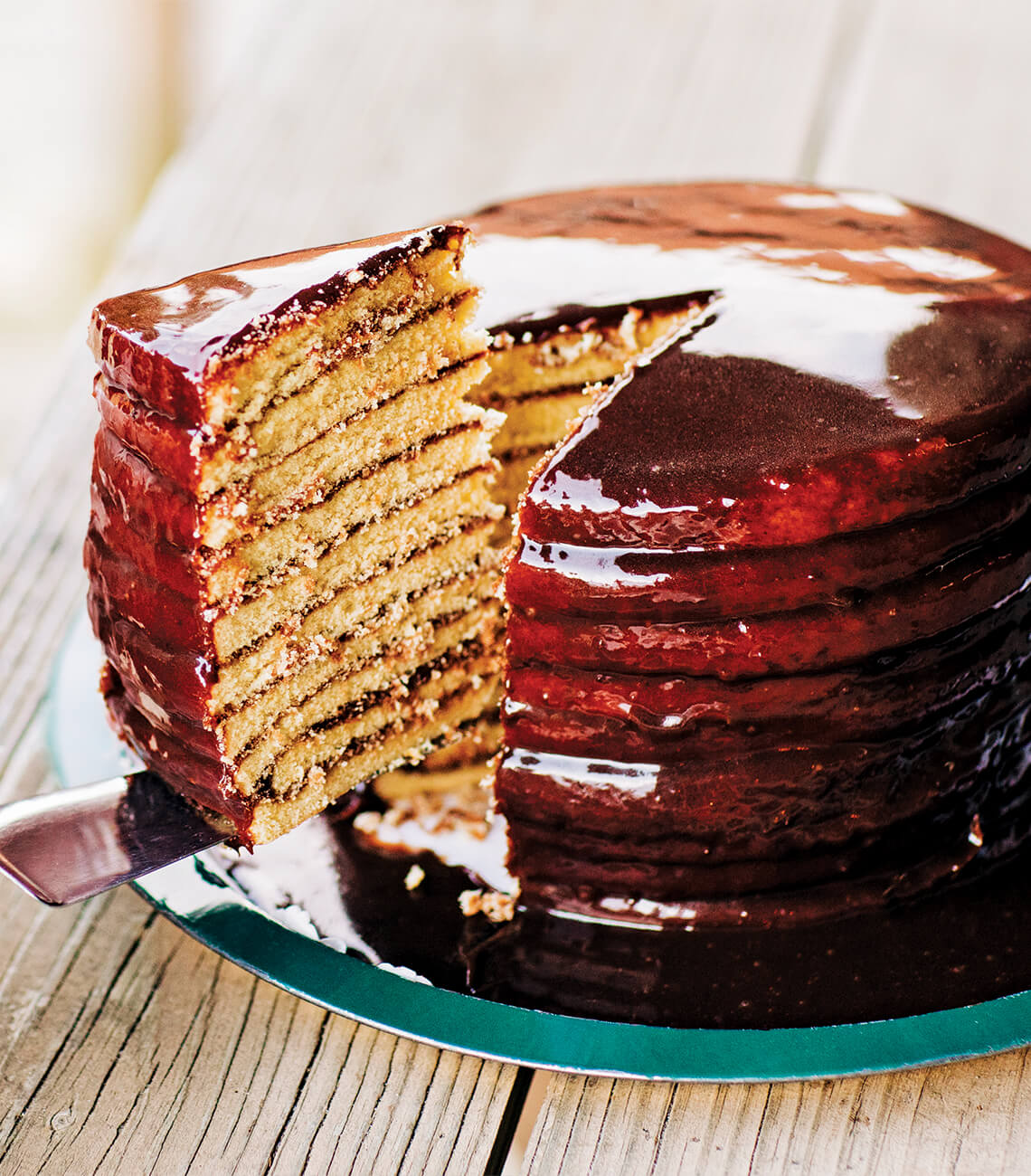 The signature 10-layer cake is a declaration of the Lowes’ love of delicious food. photograph by Matt Ray Photography

On the vast front porches, dozens of rocking chairs are lined up beneath hanging ferns that Mike and the staff rotate daily, carefully picking off any less-than-perfect fronds. Because when that first crisp day arrives each year, the customers start coming. School groups and seniors and families and civic clubs and campers from as far away as Nebraska and as nearby as Wallace. They arrive for hayrides and dinner shows, shopping and pumpkin-picking, Santa visits and light displays, animal petting and … eating. Believe it: On any given Saturday, the restaurant serves more than 1,000 people. The only meal is supper, served family-style in bowls for the table. Dishes are simple and homemade from Theresa’s own recipes: roast pork loin, fried chicken, creamed potatoes, corn, green beans, plain and country ham biscuits, banana pudding, strawberry shortcake, and pumpkin pie. Oh, and don’t forget the meal’s main attraction. The macaroni and cheese is a dish so famous, so delicious — baking instructions that read “Cheese will be stringy in the center” is a good indicator — that the wait time for a table can stretch to five hours. True to form, the couple has added a food truck so folks can easily get their mac ’n’ cheese (Mike is partial to pork gravy poured over his) and picnic on the grassy grounds. Though the restaurant — divided into decor-themed areas called The Shed, The Barnyard, and The General Store — closes at 8 p.m., it stays open and serving as late as it takes to get everyone fed.

Mike and Theresa stay as late as it takes, too, seven days a week, working until 1 a.m. and back at 6 a.m. Theresa’s pedometer has clocked 25,000 steps in a single day during the holiday season. Many years, their Christmas tree at home — if they had a tree at all — was never decorated beyond a single “Baby’s first Christmas” ornament. “We’ve never, in 35 years, gone anywhere on the weekend,” Mike says. “We will not leave this place. If we’re open, we’re here. Even if we go somewhere during the week, we realize this is where we want to be. We’re just country people.”
The couple has come a long way from drywall stilts and a notion to stir the dirt, but they’re still doing, still thinking, still growing. Theresa has been experimenting with cheesecakes for the bakery, and she dreams of adding an upscale mini golf course. “I haven’t talked Mike into that,” she says, giggling. Meanwhile, you can walk over the covered bridge or check on the goats or have your picture taken behind the scene with a farmer with the cut-out face or just sit in a rocker and enjoy the farm until supper’s ready. Mike and Theresa have it all in hand. 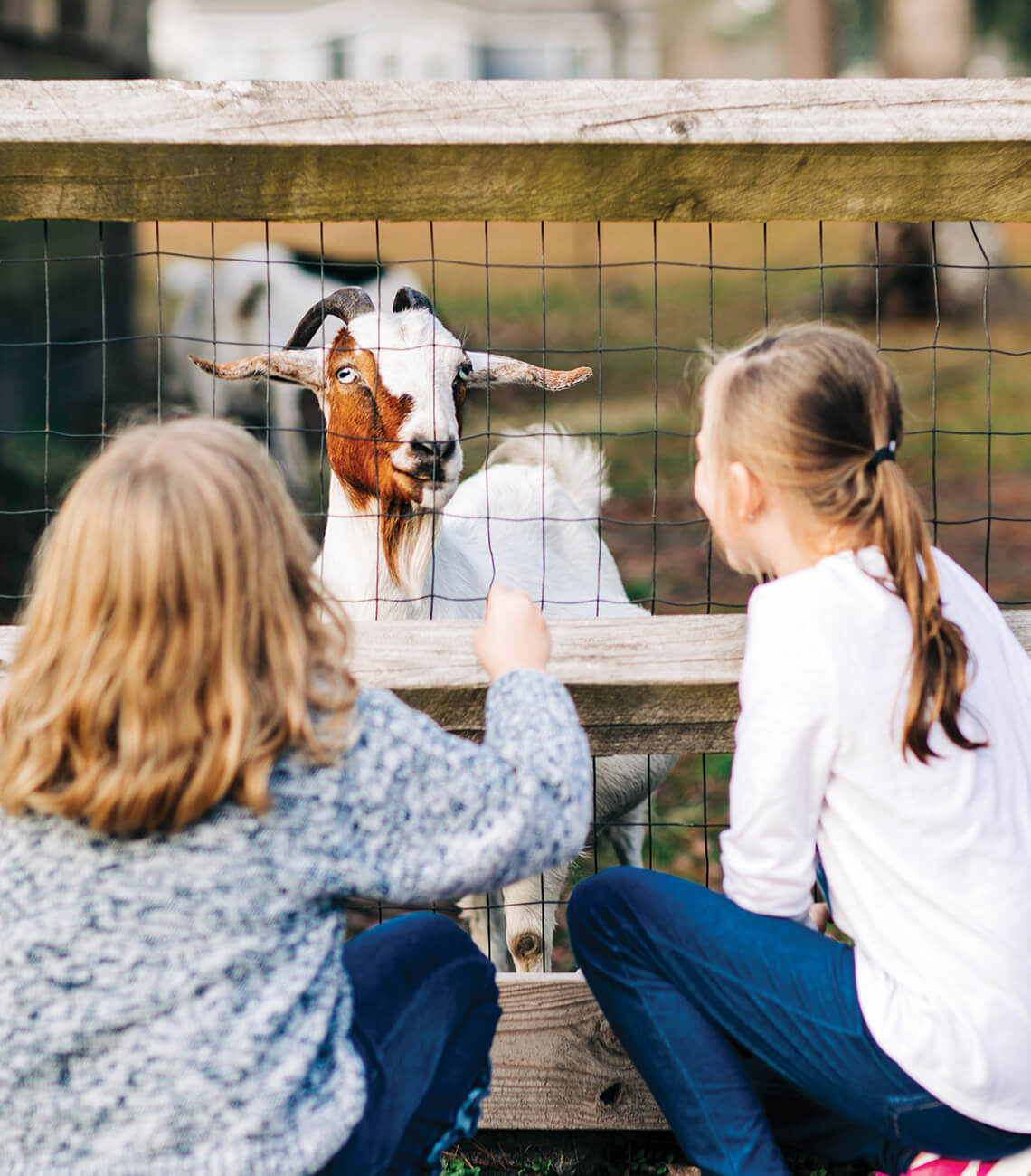 In the barnyard, a dozen goats — and a menagerie of other animals — earn treats for being cute. photograph by Matt Ray Photography