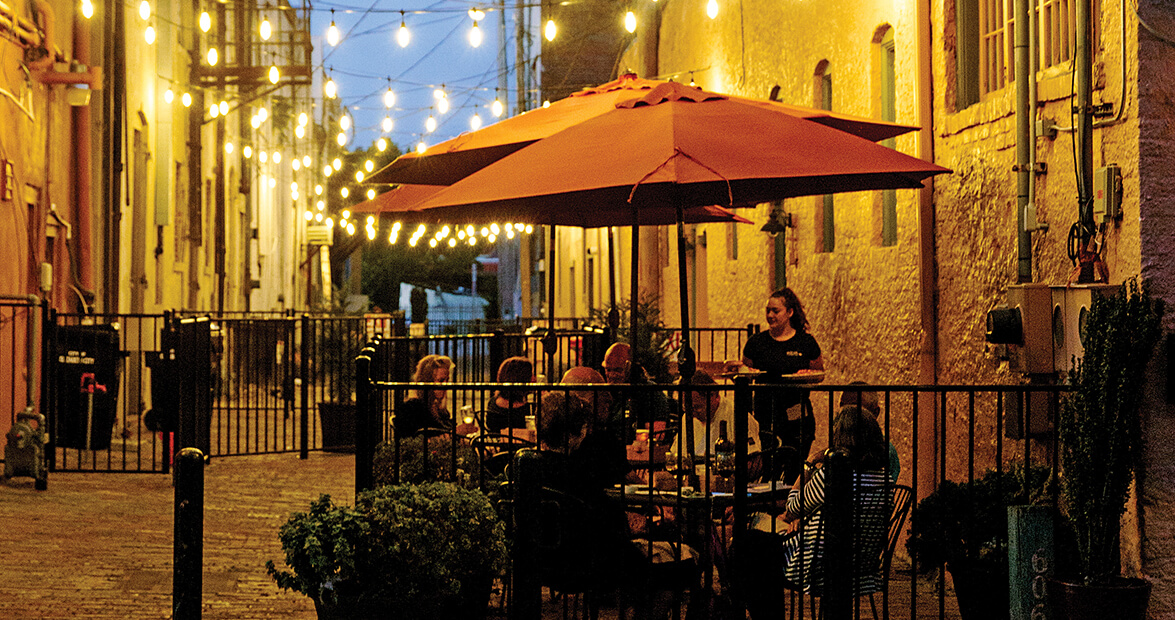 The half brick in my hand is fractured across its middle, and whatever red it once had has long since drained or soaked away, for there is no doubt that water was involved in its faded fate, its dull brown tone. On half of its long side are seven barnacles; on its fracture are nine. The same man who pulled it out of the Pasquotank River, attorney Russell Twiford, later gave it to me.

Perhaps the old underwater foundation that the broken brick came from — which Russell estimated to be about 30 by 120 feet sitting in less than four feet of water — was a portion of some Pasquotankian Atlantis, a customhouse from centuries ago slowly submerged by rising waters, which lapped around and rotted it all and sent its remains downriver to the sound.

Not the brick, though. That stayed put, where now-forgotten hands had laid it, out of sight, scarcely submerged, now in the service not of commerce, but of memory.

In the 1950s, beneath the open-arched cupola of the Elizabeth City primary school’s bell tower, in that plain, airy brick building, I recall our devoted teachers Miss Susie Morrisette and Miss Annie Wood Harris showing us the way to sit up, take notice, and draft our letters onto standard handwriting-training paper, pages with solid blue lines within which to place the capitals, and dotted blue lines halfway between the solids, below which to form the lowercase letters.

When we moved over to third grade in the big brick S.L. Sheep School — with its Works Progress Administration Art Deco style — my letters were sagging and bending improperly, and Miss Norris found it necessary to grade me down. No matter: It was in the Sheep School’s auditorium that I first trod the boards and spoke lines from a stage. Across the street, our fourth-grade class met among the big people of Elizabeth City High School, the Yellow Jackets. In a bright room behind this school’s dark brick, Colonial Revival facade, Miss Audrey Austin read to us from The Black Stallion. She followed that fabulous exotica with mysteries from the coastal and sound country, and we came to feel and understand that our own land was as important and as full of history and mystery as anywhere on earth. 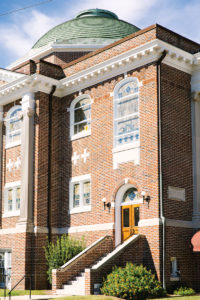 So it felt important, too, when I was deemed old enough to walk in the afternoons from the fine old school, to which my father had also gone, to his law office downtown. In charge of my own steps, I both witnessed and was overseen by the large and small buildings I passed daily on that walk, like the Southern Hotel at Main and Road streets, its brick a deep oxblood, and, around the corner, the tidy two-story brick headquarters of the northeastern region’s booster-publisher Palemon John, where he had published his North Carolinian newspaper decades earlier, and where barber Harry Umphlett later ran his celebrated and much-sought chambre d’amour, the Marriage Chapel.

Just two short blocks away, I could see the grand First United Methodist Church, a great green dome atop it and Flemish-bond courses of brick and Ionic columns holding it all up. Yet I would continue down East Main Street toward the water, walking slowly across the brick pavers of Elliott Street (Baltimore Block imprinted on many of them) and then past the Pasquotank County Courthouse, the tall, bell-and-clock-towered brick building and its powerful Corinthian portico, behind which sat the courtroom where both my grandfather and father practiced law and held forth, and where I sometimes got stationed down front on a long, ash-blond bench to watch and listen and hear, over and over again, the words justice and mercy.

Next to this was the United States Courthouse, tan brick over limestone, a slate hip-roof with three portholes — circular dormer windows — up top. And then the enormous, city-block-size Hinton Building, which everyone called the Carolina Building because the moviehouse — the Carolina Theatre — lay at its street-level heart.

The whole building’s great footprint took up everything from Main Street back to Colonial Avenue, and from McMorrine to Martin streets. It seemed to me to have everything: a drugstore; a five-and-dime; the Oxena News Stand with papers and magazines, fountain drinks, small toy cowboys and soldiers, trucks and jeeps; and that beloved movie theater. Here, Elvis sang “Love Me Tender” on the silver screen; a life-size Robby the Robot took tickets to Forbidden Planet at the door; a radium-infused skeleton even flew out on a rope-and-pulley rig from stage left to the balcony and back into the wings during the acid-vat scene in the Vincent Price film House on Haunted Hill.

From the windows of my grandfather’s and father’s law office high up on the top floor, I watched giant, Macy’s parade-size balloon characters float down East Main toward the water, through this broad brick canyon, during our triumphant Potato Festival Parade each year, and, too, I looked out upon the holiday parades, featuring the elaborately dressed golden Yellow Jackets, the Elizabeth City High School band, and the African-American P.W. Moore High School Band, astonishingly choreographed, with its breakout sessions that simultaneously startled and thrilled the audiences lining East Main.

Everything I could see, looking out my father’s window, spoke to what a boomtown Elizabeth City had been, for this feast of brick before and below me told so many tales. Across the street, the elegant, 1926 jeweler’s building proclaimed SELIG up near its roofline, and delighted the eye with its Delft-blue tiles set about buff brick (fired locally by the Elizabeth City Brick Company, now 125 years old and still selling, though no longer making brick), with a lovely line of sculpted golden waves rushing along a narrow blue field below the second-story windows. Facing Selig’s, the side-by-side Kramer and Lowry-Chesson buildings echoed each other with their tall, arched, third-story windows. Forty years ago, I walked through a storage-closet door on Chesson’s second floor and straight into the antique past of vaudeville, into the empty, long-unused Academy of Music theater, its old drapes torn and falling, its seating removed, dust everywhere but no ghost light, or even the thought of a ghost light, to keep all thespian spirits at peace.

Now, that theater has been reborn, rechristened the Maguire Theatre in honor of the renovation’s benefactor. On the day of its gala reopening, I watched a fogbank move slowly upriver toward downtown, enveloping as it did the old Beveridge House, built out on brick stilts above the Pasquotank, and, too, the red-brick Normanesque-style home that Texas Oil Company distributor Miles Clark built for his bride back in the Roaring Twenties. 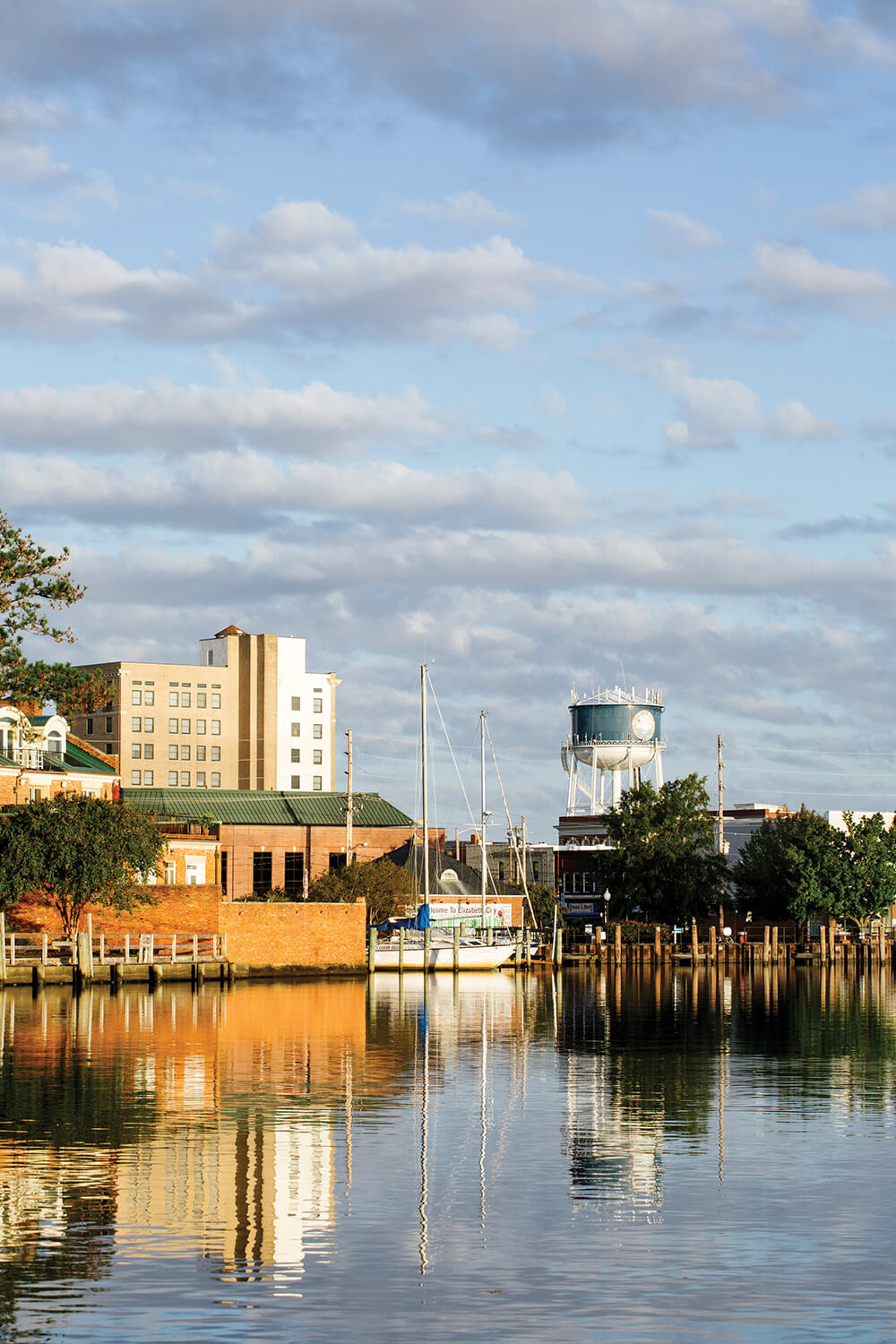 The 1927 Virginia Dare Hotel, the first and only Albermarle skyscraper, towers over the river port. photograph by Anna Routh Barzin

From the ’20s also came our first and, 90 years later, still our only skyscraper. On East Main, and on side street McMorrine, stood the tall, tawny, nine-story brick tower of the Virginia Dare Hotel, all decked out with an arcade and a balustrade above. In its heyday, the Virginia Dare hosted white-linen-tableclothed Sunday midday dinners: fried chicken, mashed potatoes, green beans to die for, iced tea you sugared yourself.

Across from the hotel was the Gothic Revival Christ Episcopal Church, its octagonal bell tower and parapet visible from downtown. Nearby, the old brick Citizen’s Bank once wore a witch’s cap atop its front turret, and in Christ Church’s graveyard, two large brick vaults still lie a few feet behind wrought-iron fencing, large cedars looming over the hallowed ground.

Most of all this, which I took in during childhood and embraced forever in my heart, still stands in Elizabeth City today. An epic fire on March 1, 1967, laid waste to the vaunted brick Carolina Building, though, and now the very memory of it is nearly as old as the once-central piece of town life was on the cold night it burned.

Yet none of this feast of brick existed a couple of centuries ago, excepting only the long-submerged downriver foundation whence came the barnacled brick.

Into our land of vast swamps and dense pine barrens — where for 10 millennia men and women and children (the first peoples, the land-bridge pilgrims) had lived in dwellings of twining vines and sticks and hides — came Europeans wanting more permanence to their homes and shops than they perceived the Algonquians had yet attained in their stockade-encircled tents and long-houses. So to establish and protect themselves in these low precincts of dark dirt and mud and muck, the newcomers turned to the one handcrafted artifact that they thought could do it all for them: brick.

Many decades later, we stride about and marvel at Elizabeth City, Betsy, Queen of the Albemarle, the riverport that kept on coming into its own every time a builder hired a mason who, with string and rule, went right to work, setting a new brick building in place, the deep red look of the watertown deepening still. No one who called for these old buildings, no one who laid out their courses and stacked and mortared them into being, not a one of them yet lives — but the buildings do. And they speak to us with authority and color, the morning sun rising over the broad river and the swamps to the east and lighting up every shade of red on the side streets, and on both sides of Main.

Brick by glorious brick do I remember and love it all, and I always will.