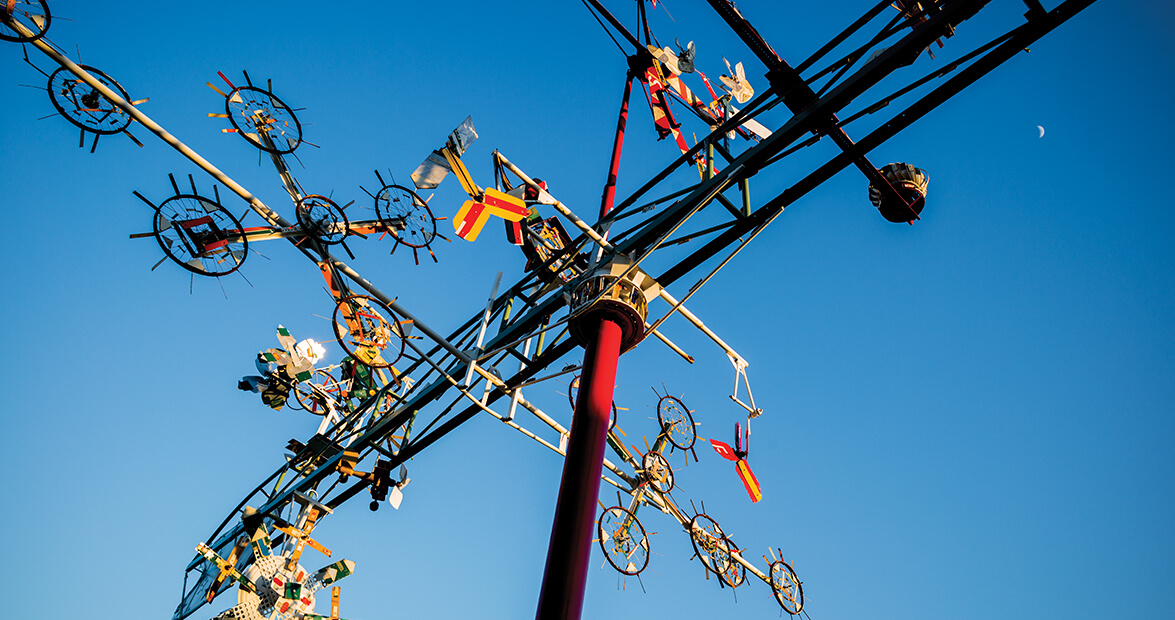 The broad tobacco leaves stretch across the flat expanse of a tabletop, every vein and wrinkle on display. The leaves are encased in gleaming epoxy, but they may as well be preserved in amber, perpetually golden and free of pests.

At dinnertime at Jac’s Grill in Wilson, people cozy up to these tables adorned with spreads of Wilson’s longtime bread and butter. George Newsome sits next to his wife, Charlotte, at the bar. He’s worked for years in the tobacco industry and had his buddy, Louis Thorpe, design a “unique bar” for his office at Top Shelf Tobacco. “He said, ‘Let’s get some tobacco leaves and see what I can do with it,’” Newsome says. “So he got the leaves, and the first project he did was my bar.”

People loved the tobacco leaf motif. They wanted the bar, or at least a table with the same golden-leaf chic. So toward the end of 2014, Newsome and a couple of other guys launched a business together, turning wrinkly, fresh-from-the-curing-barn tobacco leaves into dashing decor, and called it Artisan Leaf. “I feel like it’s distinctively North Carolina,” Newsome says. “And of course Wilsonians love it.”

Like the tiny veins in those sprawling leaves, tobacco has permeated life in Wilson for generations. Many natives will tell you they grew up on, worked on, or had family who owned — or still own — a tobacco farm. In the 1880s, tobacco replaced cotton as the go-to moneymaker in Wilson County, and the Coastal Plain’s sandy soil proved ideal for growing bright leaf, flue-cured tobacco, the kind prized by smokers from Paris to Shanghai. Bright leaf made North Carolina a superstar tobacco producer, and Wilson was the gold standard.

You can almost smell the fragrance from a billion leaves at the warehouses on an August day.

In 1890, Wilson opened its first tobacco market, and over the next 30 years, it earned the title “The World’s Largest Bright Leaf Tobacco Market.” More than a dozen brick warehouses blossomed around downtown. The Farmers Warehouse. Smith Warehouse. Liberty Warehouse. Hi Dollar. Big Dixie. Big Star. Every August on the opening day of the selling season, rows of waist-high bundles of bright leaf covered the floor in shaggy brown piles. And oh, the scent: a rich, sweet, intoxicating smell wafting throughout town. Joe Noulles, who worked in tobacco for 25 years, likens it to the scent of a pipe: “It was just a wonderful aroma.”

Opening day was big on stagecraft, too, with the rapid-fire chant of the auctioneer and the presence of TV cameras. The governor often showed up, or a senator, and always the state agriculture commissioner. President Jimmy Carter came once. So did Perry Como. There were tobacco parades and beauty queens. The city started a baseball team called the Wilson Tobacconists, known today as the Wilson Tobs.

“We were built on tobacco money,” says Joe’s wife, Lindsey, who works in the Wilson Visitors Center. Drive along West Nash Street into a neighborhood lush with magnolias, poplars, and oaks, and you’ll pass grand homes with tall columns and broad porches. These houses were built in the early 20th century by local tobacconists who owned warehouses. 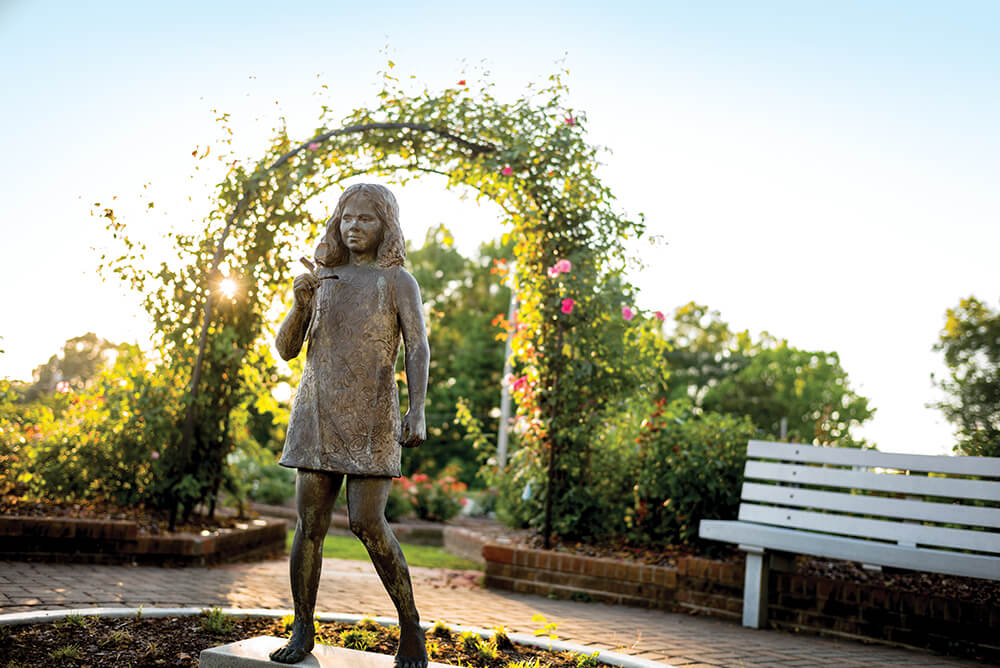 The Wilson Rose Garden, which blooms from May to October, features about 1,200 rose plants and sculptures like Child With Rose. photograph by Charles Harris

While you’re in the neighborhood, you can stroll through the leafy grounds of Barton College. Be sure to stop for lunch at Dick’s Hot Dog Stand on the corner of Nash and Pearson streets. The sign says “Wilson’s Famous Landmark Since 1921”; that’s when Greek immigrant Socrates “Dick” Gliarmis opened the diner. Today, his 88-year-old son, Lee, and grandson, Socrates (everyone just calls him “Soc”), are in charge.

At a table inside sits 72-year-old Judy Anderson. She’s a Wilson native, so she knows tobacco: cropping it, grading it, suckering it, barning it, trucking it — why, she was driving a tobacco truck at 16. Loved that job. “It was big, big, big, big,” she says of tobacco. “We had buyers that came in from Egypt. It’s completely different now.”

In short, it’s not as big as it was back in the day. Beginning in the 1930s, the federal government regulated the tobacco market to control supply and demand. When that quota system ended in 2005, so did the auctions; now, growers sell directly to tobacco companies. Warehouses closed and became weedy brick shells. Most of them still stand, in an area of downtown called the Tobacco Warehouse District. Some have found a new purpose: Farmers Warehouse, for example, is now the Public Tire Warehouse, and developers are converting the Hi Dollar Warehouse into commercial space and 86 apartments.

Meanwhile, the city has sown other economic seeds. Two major employers are Bridgestone Americas and Merck. Branch Banking and Trust, or BB&T, was founded in Wilson and, while no longer headquartered here, still has its eight-story building in downtown, while the original two-story building remains in the Tobacco Warehouse District.

But you can no sooner extract tobacco from Wilson’s identity than you can cars from Detroit or steel from Pittsburgh; the product is part and parcel with the place. The plant itself is a beautiful thing; it’s no wonder that the bar in George Newsome’s office, inlaid with rich orange leaves, had people oohing and aahing and asking for their own. 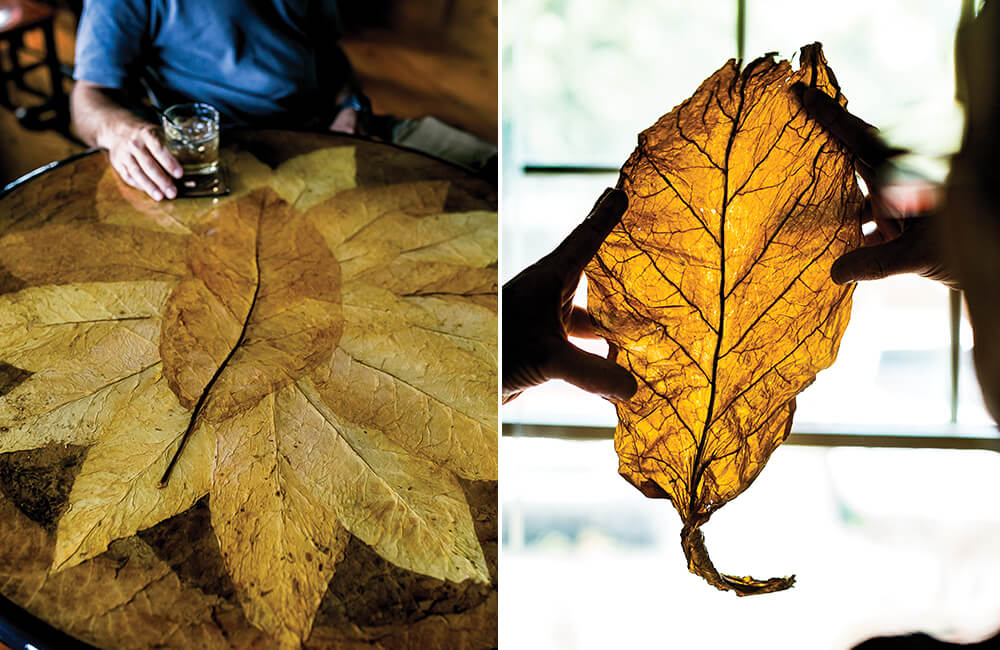 Newsome’s day job is importing and exporting tobacco around the world. But he and two other men, Sebastian Correa and Reggie Harrison, are turning a new leaf in the tobacco trade, showcasing leaves not as a commodity, but as stylish art pieces. “We talked about it over a few beers,” Newsome says, “and finally we decided to go for it.”

They founded Artisan Leaf, using light-hued tobacco leaves from local farms and getting the darker stuff — burley and cigar leaves — from other states and overseas. Correa, who studied art at Fayetteville State University, is responsible for most of the craftsmanship. He makes coasters, bar stools, tabletops, wall art, and wall panels used as wainscoting or as decorations. Orders have shipped to New Jersey, Wyoming, and as far away as Indonesia. But the hometown clientele is the most grateful, and the most gratifying.

“You’ll have older ladies come in and they’ll start crying,” Newsome says. “They grew up on a farm and there are so many memories that go on with it. It’s incredible how it touches people.”

Artisan Leaf’s work touches people because tobacco has so thoroughly touched this community. Looking at these tabletops, you can almost smell the fragrance from a billion leaves at the warehouses on an August day. Livelihoods were made and a city became famous on these leaves.

They’re the essence of Wilson’s heritage, now being shown to the world as a work of art and a thing of beauty.

Watermelon, whirligigs, and a baseball “Walk of Fame”: three things you must eat, see, and do in Wilson. 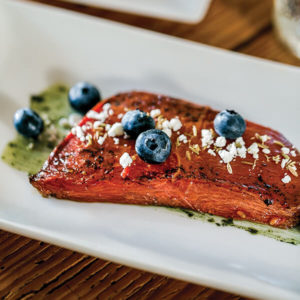 SoCo Farm and Food
In a renovated tobacco barn, wine glasses sparkle in the soft glow of a chandelier fashioned from 72 Mason jars. SoCo — that stands for Southern Comfort — is the centerpiece of the 11-acre farm owned by Jeremy and Kimberly Law. “I think the South is the perfect place to be a chef because of the proximity of ingredients,” Jeremy says. • soconc.com.

[Left] It looks like meat, but this SoCo specialty is actually watermelon.

Whirligig Park
Scrap metal fired Vollis Simpson’s imagination. He made what he called windmills, contraptions that whirl and clatter and spin through the air. Simpson died in 2013, yet his legacy stands tall at the two-acre Vollis Simpson Whirligig Park. The park is set to open in 2017, but you can visit while it’s still under construction. • wilsonwhirligigpark.org.

NC Baseball Museum
Catch a Wilson Tobs game at Fleming Stadium, and while you’re there, be sure to tour the North Carolina Baseball Museum. The museum celebrates our state’s role in the national pastime, and showcases memorabilia from North Carolina baseball players like Jim “Catfish” Hunter, Luke Appling, and Buck Leonard. • ncbaseballmuseum.com.

Two local landmarks give Wilson a vinegar-soaked reputation for barbecue.

Bill Ellis does barbecue big. His empire started out modestly enough in 1963, when the then-29-year-old opened a barbecue and hot dog stand on Downing Street. Since then, it has grown into a cavernous buffet restaurant with long tables and long lines, especially after church. • (252) 237-4372 or bills-bbq.com.

Less than two miles away is Parker’s Barbecue, where the waitstaff wear white paper caps and serve chopped ’cue, fried chicken, and seafood. Parker’s opened in 1946 as an oyster house and barbecue joint. Eventually, the oyster house was phased out, but the barbecue still packs in the crowds. • (252) 237-0972.