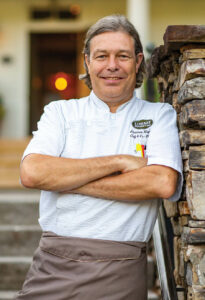 Johannes Klapdohr, a fourth-generation chef originally from Germany, leans over the pickled oak plank that overlooks the open kitchen of his Library Kitchen + Bar restaurant. It’s 5 p.m., opening time, and patrons are already being seated at two-tops, and outside, and on stools at that ideal kitchen watch spot. Klapdohr is studying a dish with kohlrabi. “Kohlrabi is the coolest vegetable on the planet because it looks like a root vegetable but actually grows aboveground,” he says. Kohlrabi is popular in northern Europe, but farmers near Klapdohr’s restaurant in Sapphire once knew nothing about it.

Now, thanks to chef-farmer collaborations, they’re growing the vegetable for many of the Library’s menu offerings, such as tonight’s filleted and sautéed coriander trout with ricotta gnocchi, Carringer Farms’ kohlrabi variation, butternut squash cream+ sauce, and almonds. “Kohlrabi is a perfect example of something I grew up eating with my grandparents,” Klapdohr says. “A locally grown vegetable with a different origin.”

Klapdohr landed in Sapphire after spending seven years as chef de cuisine at Old Edwards Inn in Highlands, where he met Marvin Gralnick, a visual artist and the founder of the women’s clothing store Chico’s. In 2009, Gralnick bought the previous iteration of the Library, inside Sapphire Valley’s oldest structure. Built around 1864 as a farmhouse on a working farm that provided vegetables and dairy products to the Fairfield Inn, the frame building became a private dining club in 1992 and was named after the inn’s lounge, The Library, where books likely lined the walls.

“It was a traditional restaurant, rustic and dark, complete with a dartboard,” Klapdohr says. He and Gralnick set about renovating it to reflect their vision: “We were two artists — his on the wall, mine on the plate — and we knew that so many people who live on this plateau have traveled the world and are very sophisticated guests,” Klapdohr says. “We wanted to elevate this area to a status that can compete with New York and Chicago. And it’s working.”

Is it ever. Gralnick’s artwork, colorful canvases reminiscent of Picasso, decorate the airy, light-filled space, while three stone fireplaces echo its farmhouse origins. A collection of antique copper cooking vessels dangles from a beam beneath the vaulted ceiling, and an elevated row of books — another nod to the building’s past — runs the perimeter of the room. One side boasts a mirrored, blue-lit cocktail bar; the other has that open kitchen bar, where diners can observe the restaurant’s primary artistry: the food.

Here’s a place where, while water is served in a Mason jar, a “snack” on the menu is griddled wild onion and sweet chili cornbread, and an entrée is Louisiana crawfish tails, brown butter and scallions, sautéed piroshki, and dill crème fraîche with Savannah River caviar.

The menu changes every few weeks, depending on what’s in season. Tonight’s soup is a creamy, fall-colored blend of Carringer Farms’ squash and parsnips, served with Okinawa sweet potato chips drizzled with California blood orange oil. Local fishers and foragers show up at the back door with fresh-caught trout, mushrooms, pokeweed, and branch lettuce, and Klapdohr also manages to secure rarer ingredients — like some of the only beluga caviar in the state. 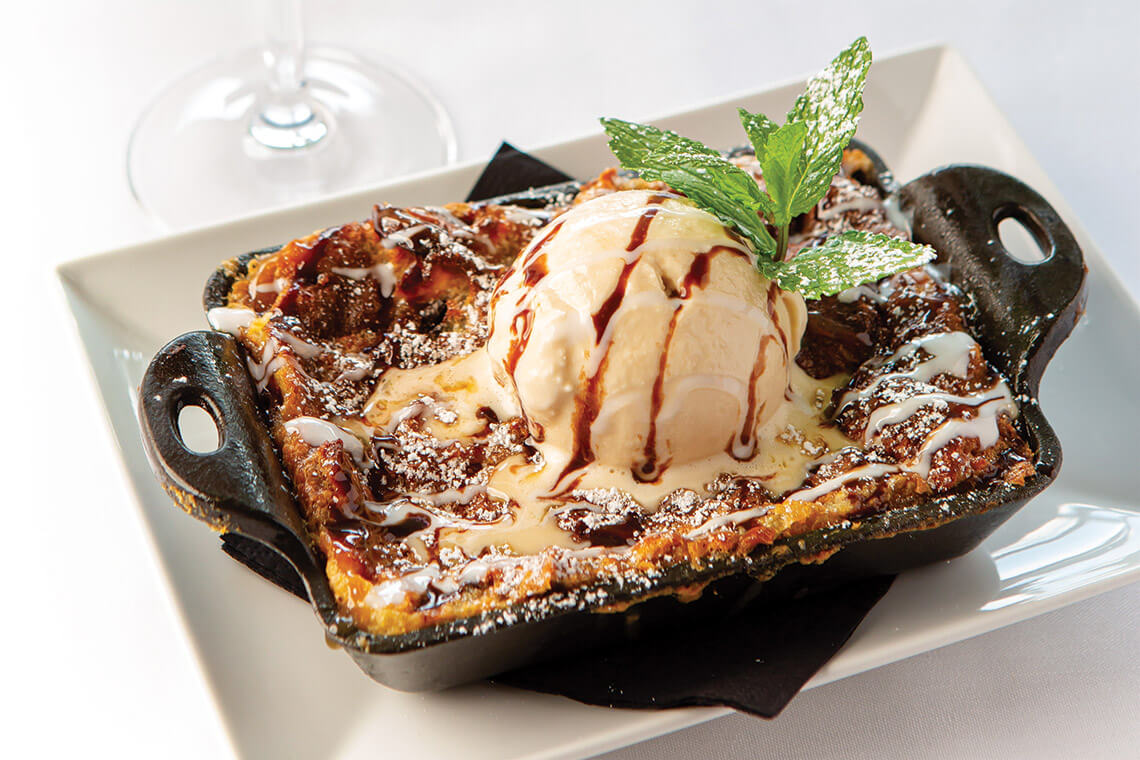 At the Library, the chocolate croissant bread pudding with caramel ice cream never leaves the menu. photograph by Tim Robison

For guests who sit at the lacquered bar, surrounded by antiques inherited from Klapdohr’s parents’ restaurant — a heavy iron sausage grinder, coffee grinder, and cheese grater — the food prep is on full view. “A lot went into the open kitchen concept,” Klapdohr says, “because we’re focused on guests having an experience, not just a meal.”

Presiding over the main dining area is a huge antique French chandelier dripping with prisms. “That’s the only surviving piece from the New Orleans Chico’s store when [Hurricane] Katrina hit,” Klapdohr says. “It falls into the same concept of a worldly but family-friendly, community restaurant, the idea of an old building being brightened up, like we hope we’re doing to this area of the mountains.” The Old World combined with the new extends from the life-size Nutcracker standing guard at the entrance, to the old Farmall tractor protected beneath the roof of a shed, to vegetarian and vegan selections.

Yes, but … what are piroshki? “An Eastern European dish,” Klapdohr explains, “traditionally made with cheese and potatoes. Old-fashioned comfort food wrapped in dough, then poached or roasted.” The chef glances over his shoulder. “Stop!” he calls to an assistant and runs to remove a fingerful of tiny greens atop white asparagus soup. Apparently, there is such a thing as too much kohlrabi.