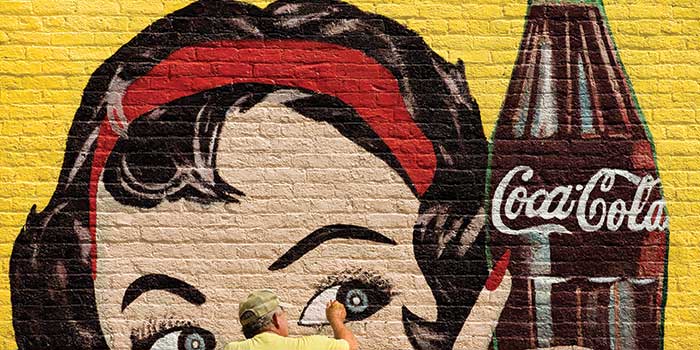 He comes and goes like a ghost, leaning his ladder against brick buildings in Salisbury, Mebane, Concord, and other downtown areas in North Carolina. You might see him, paintbrush in his hand, paint can by his side, squinting at the spot for his next stroke of red or white. He works quickly, staying just a few days, and he seldom leaves a signature.

For the past half-century, Andy Thompson has painted, and more recently restored, Coca-Cola mural advertisements across the state.

Just days after his high school graduation in 1958, Thompson started painting signs for Coca-Cola Bottling Co. Consolidated in Charlotte, the only job he’s ever had. In the late ’80s, he retired when the company stopped painting on brick, but he continued reviving the murals as an independent contractor, thanks to funding from civic groups and businesses. Fifty-five years after he first started painting, the 72-year-old continues to revisit his works, as well as those of his predecessors.

“I’ve done beaucoups of them,” Thompson says. “People just didn’t restore them, and the buildings were torn down or painted over.”

The fate of the fading ghost signs changed in 2011, when Coca-Cola Bottling Co. Consolidated decided to help fund their restoration.

On February 9, 2011, workers in Concord dismantled aluminum siding at 2 Union Street, revealing a mural of a smiling woman holding a bottle of Coca-Cola and the message, “Things go better with Coke.”

The old advertisement was in great condition, since it had been shielded from sunlight by the siding and the wall’s northwest orientation.

“If they get more sun they aren’t going to last as long,” Thompson says. “The red especially is going to fade quicker than anything.”

The Coca-Cola bottling company agreed to fund the necessary restoration of the mural along with community preservation organizations and local businesses.

Thompson completed the project, making sure to restore the signature, “Hampton 5-24-66,” belonging to original painter, Clarence W. Hampton. Thompson left no signature of his own.

Just three days after the project to resurrect the Concord mural began, one of Thompson’s other restorations in Henderson County went up in flames.

The Coca-Cola mural was painted on the roof of a community gathering spot, the Green’s Six Oaks convenience store in Tuxedo, locally known as Roscoe’s.

But Thompson doesn’t grieve the loss of his work.

“If it hadn’t burnt down, they would’ve had to put a new roof on the building anyway,” he says, shrugging off what might be considered a tragedy to any other artist.

Fortunately for Henderson County, another of Thompson’s restorations remains on the side of The Wrinkled Egg, a shop just five miles north in the heart of Flat Rock. It is one of the few remaining Coca-Cola signs painted on wood.

No two murals are alike. At Dick & Jane’s Tapas & Martini Bar in Mebane, the outside mural depicts a woman holding a bottle with the slogan, “Lunch Refreshed.” In nearby Burlington, at 147 North Main Street, an elfin man holds a bottle next to the caption, “Work Refreshed.” At 303 Main Street in Hendersonville, the ad declares: “Relieves Fatigue and Exhaustion.”

Other, simpler designs, like the one on the building that housed the bottling plant from 1918 to 1930 at 6th and Graham streets in Charlotte, depict a solitary bottle and the words “Charlotte Coca-Cola.”

Thompson is hesitant to pick a favorite mural or even to try to tally the number he’s painted.

And with the revived support of the bottling company, he has even more wall murals in the works, including a large-scale landmark in Mount Airy.

“I got another one — I’m just waiting on good weather now — in Franklinton,” Thompson says. “I just need about three or four good days.”

Having recently returned from Vienna, where he edited The Vienna Review, Christopher Anderson is now fully aware of ghost signs everywhere and may be spotted gazing at one in any given town in North Carolina, trying to decipher what it reads. This is his first story for Our State.