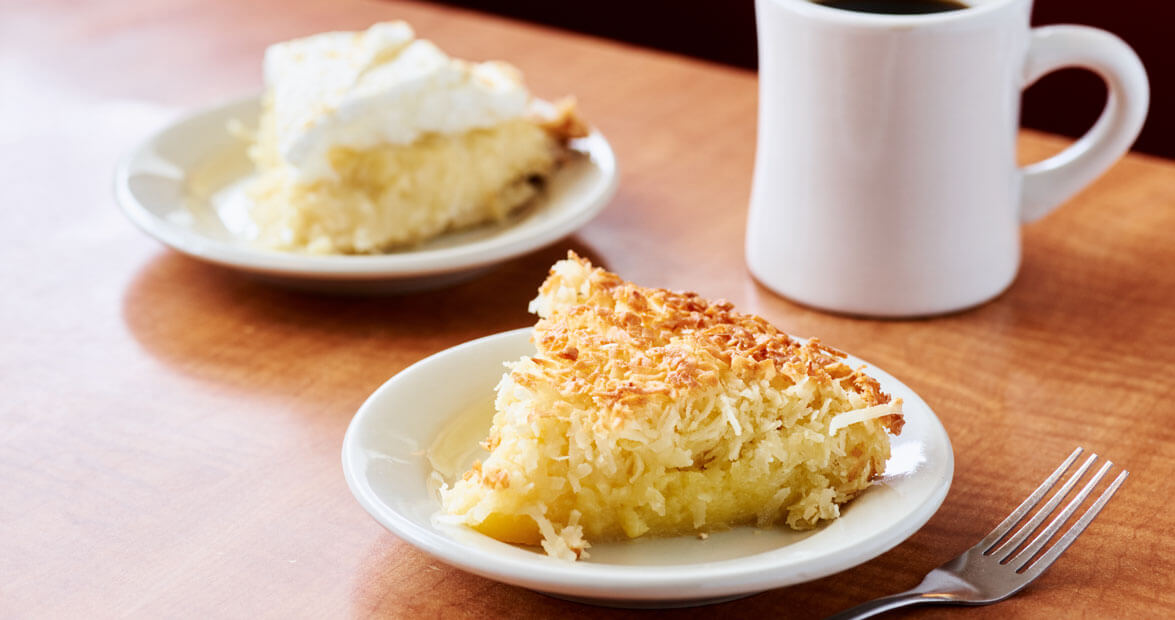 “My father won World War II for us,” Jimmy Blake says. “He got out in 1946, then opened Blake’s on July 4, 1947. My parents had been married about a month.” Indeed, Colon and his bride, Inez, weren’t ones to sit around. After a short honeymoon, they opened their namesake family restaurant. More than 70 years later, it’s still the go-to spot in Candor for meatloaf and creamed potatoes. And it’s still family-run — now by Colon and Inez’s son Jimmy and his three brothers. “Consistency is our key to success,” Jimmy says. “And nice, friendly folks.”

Folks like Vivian Cook, who follows the restaurant’s classic dessert recipes, with a few creations of her own. “I feel like we have the best desserts we’ve ever had,” Jimmy says. Take the coconut custard pie, which has been on the menu since the ’50s. Its secret? As Cook describes it, the filling “makes its own pie shell.” Just combine shredded coconut, sugar, milk, eggs, and flour; pour into a pie dish; and bake. Recently, Cook has added a new customer-favorite, coconut cream pie — in a pastry crust, with meringue on top — as well as fried apple hand pies. The best part of her job: “That feeling when someone out front says, ‘Hey, y’all did a real good job.’ ”

To try this pie, you’ll have to go straight to the source. But we’ve got home bakers covered, too. This recipe comes to us courtesy of Sheri Castle, an award-winning professional food writer, cook, and recipe developer.

For the filling: Whisk together the sugar, eggs, egg yolk, and flour in medium bowl.

Bring the milk to a bare simmer in a medium saucepan over medium heat. Add the hot milk to the egg mixture in a slow, steady stream, whisking constantly. Pour it into the saucepan; cook until the pastry cream thickens and boils, stirring constantly, about 4 minutes. Remove the pan from the heat.

Push the pastry cream through a fine sieve into a glass or metal bowl. Stir in the coconut, vanilla extract, and coconut extract. Press a round of buttered wax paper or parchment paper directly onto the surface to prevent the formation of skin.

Chill until cold, at least 2 hours. Scrape the filling into the pie shell. Cover and chill overnight.

For the topping: Toast the coconut in small heavy skillet over medium heat until lightly browned, stirring occasionally, about 3 minutes. Cool completely.

Just before serving, beat the cream, sugar, and coconut extract in a bowl using an electric mixer until it just holds stiff peaks, then spoon on top of pie. Sprinkle evenly with toasted coconut.

(Can be prepared up to 4 hours ahead. Cover and refrigerate.) Serve cold.