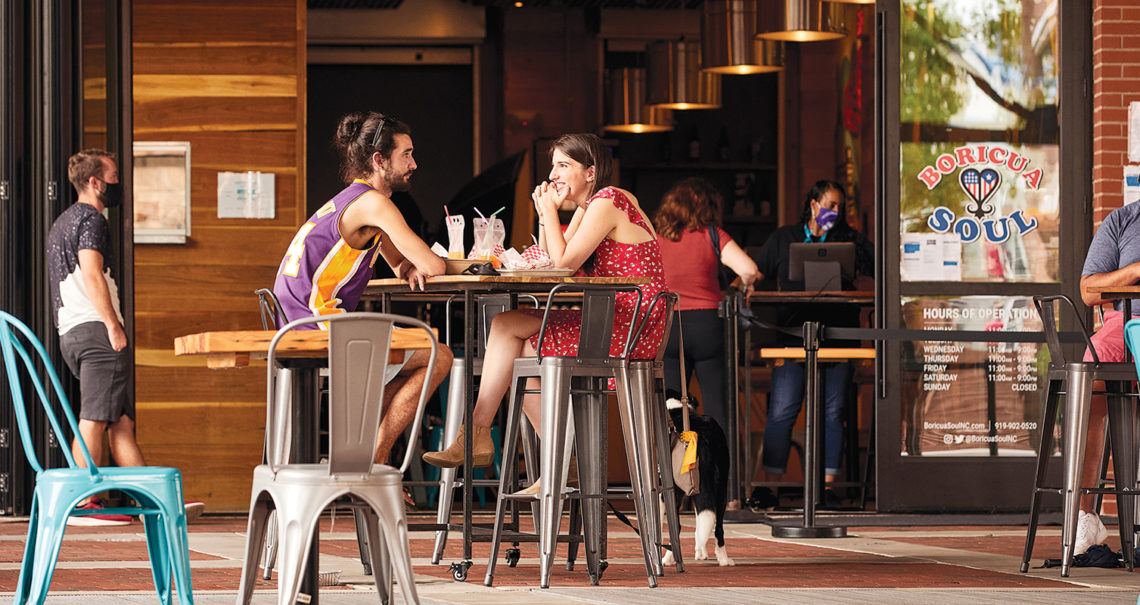 Southern cooking is often Grandma’s cooking, which was definitely the case for Toriano and Serena Fredericks. Beans and greens cooked low and slow. Fry oil shimmering in a cast-iron pan. Pork — often a whole hog — that took all day to prepare, but was worth it when the family was celebrating something. Even just being together. 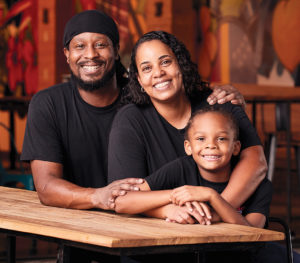 Inside Boricua Soul, a mural featuring Toriano and Serena Fredericks’s grandmothers watches over the couple and their son, Devin. photograph by Alex Boerner

For the Frederickses, these traditions converge at Boricua Soul, their restaurant in downtown Durham. In 2015, the couple quite literally test-drove a concept blending their grandmothers’ cooking: On a food truck dubbed “The Soul Patrol,” they’d roam Triangle-area office parks and food truck rodeos, delivering family histories and food memories through a takeout window.

Today, at their brick-and-mortar spot, Serena and Toriano pile paper trays high with foods inspired by intersections that they’ve discovered through their families’ kitchens, from North Carolina and Georgia to Puerto Rico and New York City.

Take the Boricua Soul Bowl: A glossy heap of collards huddles next to a tangle of shredded pork — though this isn’t the eastern-style barbecue it appears to be. It’s slow-roasted Puerto Rican pernil, topped with quick-pickled red onions. A scoop of mac ’n’ cheese fits comfortably beside a scoop of arroz con gandules, a Puerto Rican staple of rice speckled with pigeon peas. Crunchy, salty tostones — slices of green plantain, smashed and fried twice — look like bursts of sunshine atop a platter that shines light on a nuanced story of the South, rooted in Black foodways and cross-cultural influences.

When Toriano first began cooking in North Carolina, folks challenged his Southern food authority. “You don’t know anything about cornbread,” he recalls hearing. But he did: Although technically from Connecticut, Toriano was raised by his grandmother Emma Thompson, a Georgia native whose Sunday dinners attracted more than just family. “Sometimes, people showed up just because they knew she had something cooking,” Toriano says. “The table was filled with collards, cornbread, mac ’n’ cheese, fried chicken.”
Like millions of Black Americans of her generation, Thompson moved north during the Great Migration. In hindsight, Toriano realizes that Southern soul food appears on Black family tables around the country for that very reason.

Serena’s influences originate from her maternal lineage in Puerto Rico. She grew up in Queens, New York, where her grandmother Alejandrina Jimenez gathered the family. “During the holidays, my grandmother’s house was a hub of family, food, music, and dancing,” Serena says. “Many of the dishes we serve in the restaurant are the holiday foods I grew up eating.” 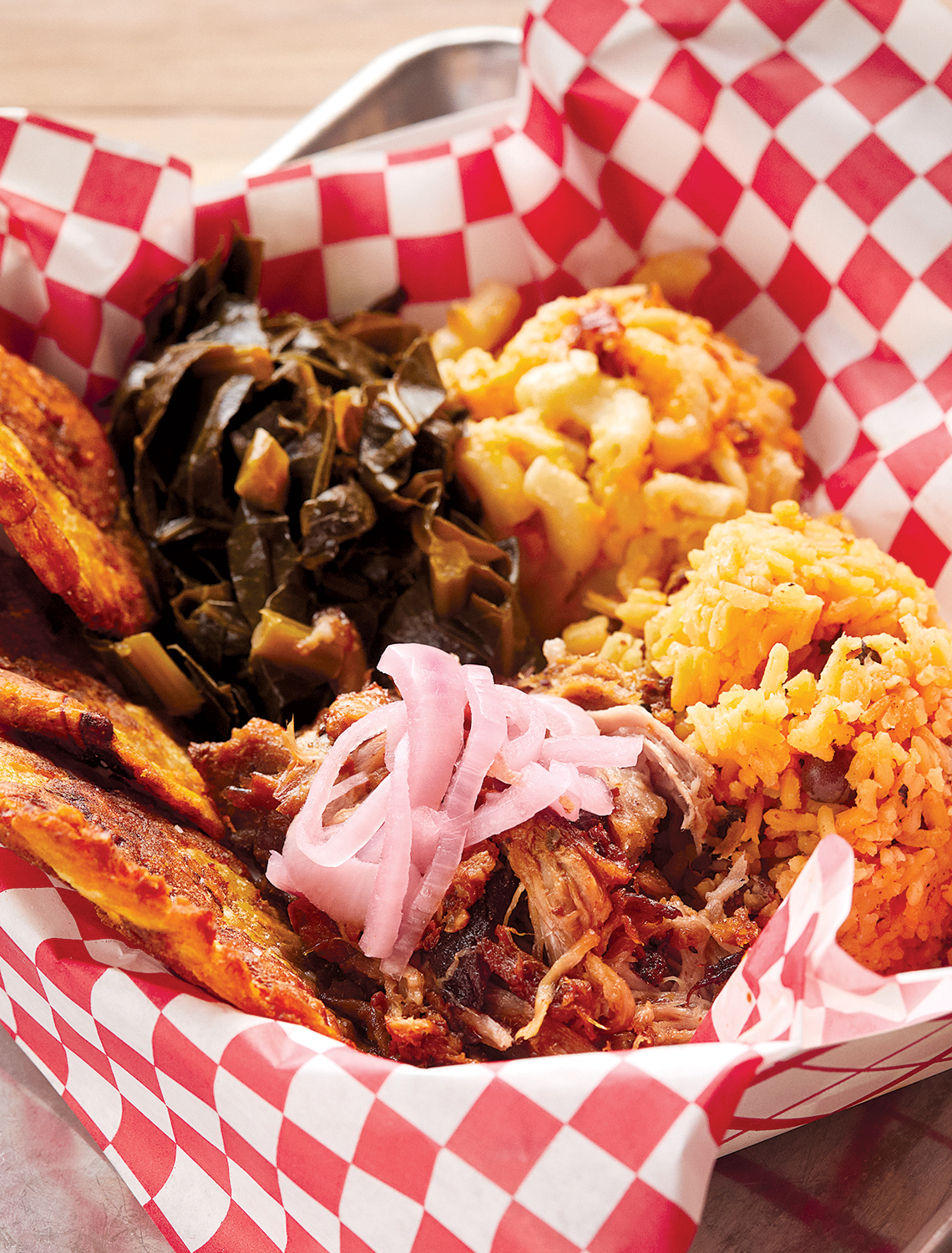 The Boricua Soul Bowl combines staples from the South and Puerto Rico. “It’s what I’d usually throw together and eat at the end of every shift on the [food] truck,” Toriano Fredericks says. photograph by Alex Boerner

The two food traditions share a common source, Toriano explains. “Soul food was passed down through the hands of descendants of African slaves influenced by the Native Americans in America and the Europeans who brought them.”

“This is the intimate relationship that has existed for centuries between the Caribbean and the American South,” says Von Diaz, a Puerto Rican-born, Georgia-raised cookbook author, journalist, and professor. “In that way, Boricua Soul isn’t doing anything revolutionary. They’re reclaiming the naturally existing intersections between their ancestral culinary cultures.”

The Frederickses opened Boricua Soul — their first restaurant — in late 2019. While their peers rework the existing model during a pandemic, the couple jumped into the game at a moment when a playbook no longer exists.

But having worked within the constraints of a food truck has given them freedom now. With ample kitchen space, Toriano fries up empanadas faster, filling them with collards and black-eyed peas, barbecue (yes, eastern-style), and sweet potato cheesecake. He’s made new staples, like chicharrones de pollo, a Puerto Rican play on fried chicken, and is experimenting with jackfruit. And customers continue to flock to Boricua Soul’s patio.

“Even with its challenges, we have remained authentic to who we are as people, as a family,” Serena says. “[Customers] have been so supportive of us. We are grateful.”