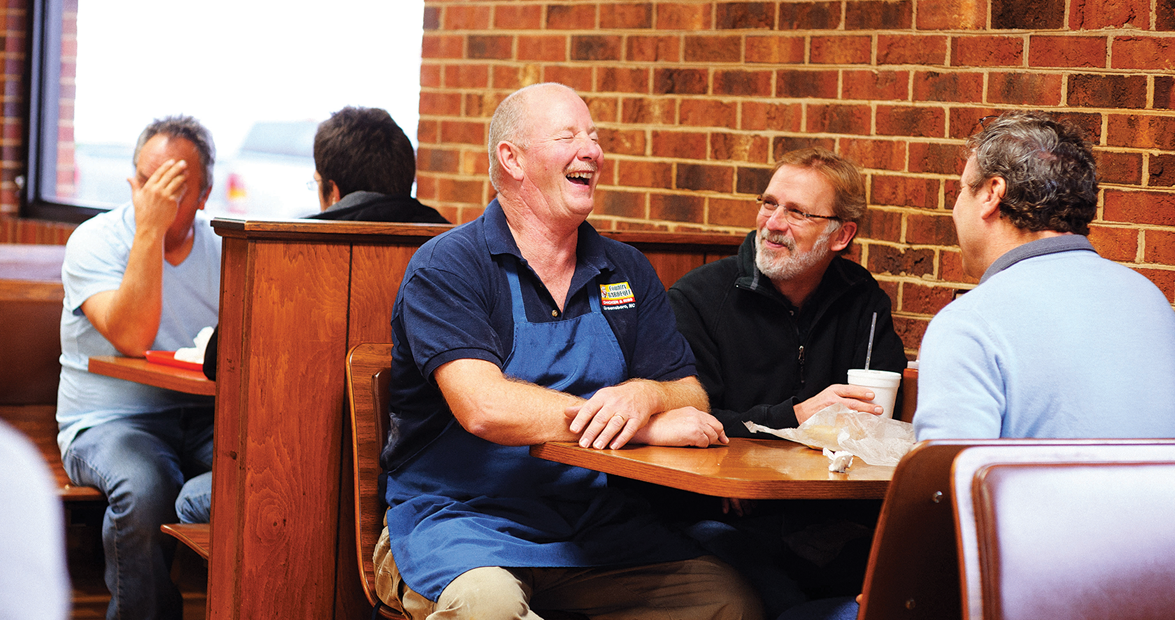 Greensboro residents love Country Barbeque. Yes, the food is good, but even owner Tony McPherson will tell you that it’s not much different than other Piedmont barbecue places. The decor isn’t bold: brown on brown with a little brown thrown in to mix things up. Yet the staff members are warm and kind and know more than a few of the regulars by name. But you expect that from a 33-year-old restaurant.

To understand why customers return to Country Barbeque again and again, you have to look outside, at the world that surrounds it.

Country Barbeque is situated at the heart of West Wendover Avenue, a major artery connecting Greensboro’s suburbs and High Point to the Gate City. This stretch of roadway is crammed with car dealerships, big-box stores, and chain restaurants, all competing for commuters’ attention with ever-changing brighter, louder advertising.

Amid all the luxury cars and buy-in-bulk discount stores is a yellow-and-red sign with a pig in a chef’s hat. The sign doesn’t promise fancy or new. It offers simplicity and consistency.

Inside Country Barbeque, no one’s putting on airs. The restaurant draws mostly working-class folks dressed in worn jeans and stiff work shirts. Although a few businessmen in white collars and sharp ties do roll up their pressed sleeves to the elbow, a proper precaution before digging in. When the plates, trays, and sandwiches arrive, knowing customers reach for Tony’s barbecue sauce, sweet and tangy with a ketchup base.

That sauce and the Country Barbeque business were born in the tiny kitchen of a single-wide trailer in Lexington in 1975. Tony grew up working in Lexington’s long-standing barbecue restaurants, including local favorite Hill’s Drive-In, which is no longer around. He later worked for the Stamey family, a barbecue legend. When he was 24 years old and recently married, Tony decided to strike out on his own. He partnered with his brother Dewey and after spending weeks testing sauce recipes on everyone they knew, they opened their first place in a rented storefront in High Point.

The business did well, and by 1980 Tony and Dewey bought property on Wendover Avenue and built the Greensboro restaurant. They hoped the new location would help their business step out of Lexington’s shadow. But Tony doesn’t hesitate to credit the value of his experience working with some of barbecue’s biggest names.

“I owe a lot to all those men I worked with,” he says. “I learned how to cook pork and make sauce and run a restaurant, but more than anything, they taught me how to run a business.”

Tony also knows that Country Barbeque wouldn’t be successful without his own family. Tony and his late brother Dewey worked together until 1993. And Tony’s younger brother Jerome has managed the Wendover location since it opened.

Jerome is the Greensboro restaurant’s most identifiable character. His large frame would be intimidating, if not for his constant smile. The jolly giant greets almost every customer who walks in.

“I love to talk to people,” Jerome says. “We have so many good, hardworking people that come here regularly, and you get to know them. … With everything moving so fast anymore, I think sometimes people just like to have somewhere they can go and get a good meal and talk to someone they know.”

The brothers say their upbringing is one reason they’ve done so well.

“When you grow up poor, you don’t have a lot of options,” Tony says. “We didn’t want to go to work in a mill, and this was one of the few things we knew how to do. Frankly, having so few choices turned out to be a blessing in disguise for us.”

Comfort in a biscuit

Customers appreciate that Country Barbeque doesn’t try to be anything other than what it’s always been: a simple barbecue restaurant modeled after some of North Carolina’s most revered pork places.

“It’s not fancy or anything like that,” says longtime customer Frank Stevenson. “It’s just always good, and the people are friendly, and it’s where we’ve always come.”

Frank retired about 13 years ago, but he still meets his former coworkers at Country Barbeque for breakfast once a week. It’s a tradition they’ve followed for decades. Frank’s favorite is the tenderloin biscuit, a cut of chicken-fried pork as big as a man’s palm between a biscuit large enough to lock your jaw.

“Every Thursday I look forward to that tenderloin biscuit and having a genuine conversation with all those guys,” Frank says.

Frank may have retired and his work routine may have changed, but those tenderloin biscuits are a constant. Customers rely on those Country Barbeque constants — tenderloin biscuits, trays of chopped pork, sandwiches served in deli paper, squeeze bottles of sauce — to give them comfort as everything else around them changes.