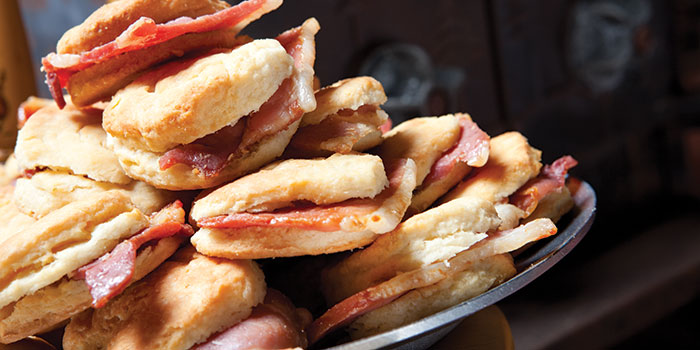 Henry West follows a path covered with brown pine needles until he reaches Westwater Country Ham, where he pushes open a door, and breathes in the smell of cypress wood and aging ham.

This morning unfolds like every other morning in the 42 years since Henry opened Westwater in 1971. At about 8:30, he travels the short path from his home to his business next door in about three minutes. Along the way, he stops to admire the camellias, azaleas, and rhododendrons he’s planted in the sandy, eastern North Carolina soil.

Inside the shop, Henry positions himself behind a counter, next to a bronze 1902 National cash register. Behind him, a bright landscape painting of a pond edged by pine trees and azaleas hangs on a wall of cypress-wood paneling.

Today, two women are among the first customers. They’re here to order their country ham for Christmas, the most hectic season for the business. Henry pulls a pen from his shirt pocket and jots down the important information. Name. Telephone number. Whole ham or sliced.

Bart was an outgoing and curious young man when he married one of Henry’s daughters in 1978. In 1980, he joined the country ham business. He’s the manager.

As Henry continues to write down the orders from the two women, Bart quizzes them about where they came from and how they heard about the little ham house in Warsaw, on back road N.C. Highway 24-50, in Duplin County. Henry leaves most of the talking to Bart, but he accepts the customers’ money and mashes a button to open the cash register. A bell rings and the money drawer opens. Ding. Swoosh.

In the early days of Westwater Country Ham, Henry doubted his business. He had opened it to achieve simple goals. He wanted to work less, live more; to make money, not lose it; and to create something, not merely manufacture it.

He was 43 at the time, and up to that point he had owned and operated a slaughterhouse for 19 years. The work drained him.

He once tried to open another business, a business based on something he loves: landscaping. Henry fell in love with that when, as a boy, he took a trip to Wilmington with a schoolmate whose father drove them down to see the gardens at Orton Plantation and Airlie.

In 1961, Henry opened Westwater Gardens and Nursery. He kept one foot in that business and one in the slaughterhouse. He hoped the garden center would take off. It didn’t.

He stayed in the slaughterhouse business for another decade.

“But it just got to the point where the slaughterhouse became too much for me to handle,” Henry says. “So I sold it.”

By the time he sold it, he knew how to cure country hams. He had cured them at the slaughterhouse to supplement income. And although Henry wasn’t attracted to the task of curing ham the way he was attracted to landscaping, he had to work, so he did.

A ham at any hour

In the early days, when Henry worried that people wouldn’t buy enough country hams to keep his business open, he rigged up two bells to a cedar post. He set the post in the ground at the entrance to the path he walks from home to work. One bell was cast iron and the other electric. For the electric bell, he buried a wire and ran it the length of the path to his garage, where he installed the receiver. Whenever someone needed a ham after regular business hours, she could either mash a button to ring the electric bell or tug on the cast iron bell.

Henry says that almost invariably, as soon as he sat down for dinner, one of the bells would ring. He would rise from his chair at the table, apologize to his wife, trudge back to Westwater Country Ham, and fill someone’s order.

That’s the way it was in the beginning. Henry has uninstalled both bells now. He’s only open regular hours, Monday through Friday. No weekends. No more dinner interruptions.

When he’s not at the front helping customers, Henry helps Bart monitor Westwater’s three other employees, who move the hams through the curing process.

Each stage in the process mimics one of three seasons: winter, spring, or summer. Westwater follows the same timeline as when farmers held hog killings in the winter, salted the hams, and let them dry through the spring and summer. The process is just sped up: It takes about three months for a ham to become a country ham.

Standing at the counter inside Westwater Country Ham, few customers ask about the landscape painting, of a pond edged by pine trees and azaleas, that hangs on the wall behind Henry. They don’t give it a moment’s thought.

But the pond pictured is Henry’s pond. He built it behind his house in 1961, around the same time as he opened his garden and nursery center.

And it holds a special place in the name Henry gave to his business: He combined his last name, West, with “water,” thinking of his pond, to come up with Westwater Country Ham.

When Henry built the pond, he planted pine trees to buffer it on all sides, and he pressed cypress tree seedlings into the mud along its banks. He constructed a covered bridge, a fountain, and a windmill to add to its appeal.

When the pine trees matured he cleared paths through the woods. When his garden center closed, he planted what inventory he had left — the camellias, azaleas, and rhododendrons.

Later, Henry spent the daytime maintaining his landscape, and at night he cured hams. Customers rang the cast-iron bell if they needed a country ham when Henry was out wandering his property. He always hurried back to help them.

Henry owes a debt to country ham because it allowed him to follow his desire. He’s reminded of this every day, when he walks to work in the mornings and stops to admire the beauty of his creation.

Jeffrey Turner is a strategic communicator with MMI Public Relations and a former assistant editor at Our State.