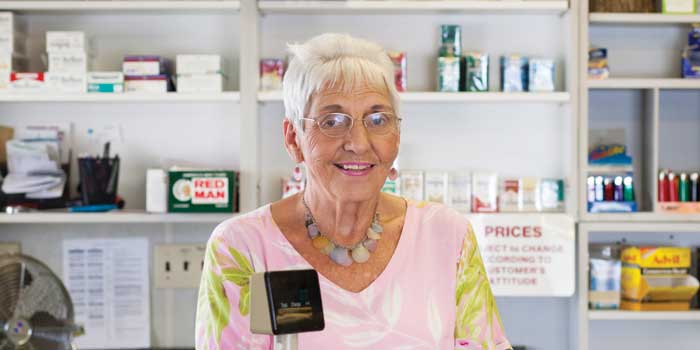 Mary Elizabeth Byrum wears her titles with pride. Her nickname, Libby. Her real nickname, Nana. And the name she calls herself, the Surrogate Grandmother of New Hope.

A 76-year-old small bird of a woman with a fluff of white hair, gold-rimmed glasses, and a neat house dress, she takes little nonsense and dishes as much sass as food at her restaurant, Byrum’s Grocery & Grill at the crossroads in New Hope.

If a couple of customers get to talking and don’t pick up their take-out orders, Nana marches over with the brown paper bags and declares, “Next time I’ll bring it right over, so your hot air can keep it warm.”

Even the list of specials ends with attitude: “If you can read — this is the menu!”

Nana and her family have spent 40 years living and working on the corner of South New Hope and Armstrong Ford roads. From the outside, Byrum’s Grill & Grocery still looks like the convenience store that once occupied the building, with plate-glass windows and security bars folded back from the double glass doors.

You’ve passed places like it hundreds of times while pulling off the interstate for a tank of gas or speeding down a country blacktop on your way to the beach or the lake.

Inside, a few traces of the building’s convenience store past remain. A single rack of chips and candy, boxes of BC Powders and cigarettes behind the cash register. But beyond the register, the store gives way to a cafe with flowered plates on the walls and a list of weekday specials like country-fried steak, meatloaf, and chicken casserole. They serve cheeseburgers and pimento cheese sandwiches, plus breakfast every morning at 5:30.

“We cook with fatback,” Nana says. “Cholesterol, too.”

While Nana runs the cash register, her children and extended family handle the kitchen. Her son Greg is the tall man behind the counter making jokes and taking orders. Nana’s daughter, Amy, works the grill with help from her son and daughter-in-law. Matt Young is almost family. He started working here when he was 14 and still comes in on his days off from the Gaston County Fire Department.

The only one who isn’t behind the counter is Nana’s son Olin, a minister in Gastonia. But he’s often at one of the tables grabbing a bite and checking in.

“We all share and swap off,” Amy says. “We all multitask.”

Nana was born in Belmont, just up the road. Her late husband, Olin, was from Waxhaw, on the far side of Charlotte. Those places were a long way apart in the 1950s. But someone brought Nana and Olin together on a blind date, and it worked. They built their house here in New Hope in 1973.

Buying the local corner store in 1985 was Olin’s idea. For years he was a salesman for Cato, a women’s clothing company.

“He wanted off the road,” Nana says. “He just wanted something on his own.”

Olin died on Christmas Eve four years ago at age 75. Now Nana and her children run the store six days a week, coming in at 5 a.m. to prepare for the early risers.

Although the kids do the cooking at the cafe, Nana brings in her own chowchow and apple butter. And she makes the desserts — small coconut, pecan, and buttermilk tarts in miniature pie tins with tender crusts.

Until four years ago, Byrum’s was a construction workers’ place. With suburbs rolling out from Belmont and new houses filling up fields, dusty drywallers and splattered painters crowded in at breakfast and lunch. The place was so full they lined up along the walls to eat.

Since construction almost came to a halt in 2008, business has slowed by half. Although people from the community still come in steadily for breakfast and lunch.

David Conner, Mitch Mims, and Steve Earley gather at a back table in the morning. One calls himself a builder, “if building ever comes back.” Another is retired: “Nothing to do and all day to do it.”

“The economy has kicked it a little,” Earley says.

But Nana declares that they’ll hang on as long as they can by not skimping on product when times are lean.

“People would rather pay a little more for quality,” she says. “They’re not customers. They’re friends.”

You won’t find New Hope on many maps. Most people who pass through on the way to Daniel Stowe Botanical Garden down the road or Twin Tops Fish Camp across the street assume they’re in Belmont or some far-flung arm of Gastonia when they reach the crossroads.

Byrum’s has a Gastonia address and phone number, and only someone with a memory that reaches as far back as Nana’s can still recite the New Hope borders: “Seven miles and cross Seven Oaks Bridge, and you’re in South Carolina,” she says, jerking her thumb in one direction. “Two miles up thataway,” flapping a hand the other way.

“I guess we live here so no one can find us,” she says.

About four miles away, U.S. Highway 74 stretches across the state lined with places to get breakfast or lunch, places with drive-through windows where you don’t even have to get out of your car.

So why would you stop at a small crossroads between Gastonia and Belmont? Why take the time to pull over at a place like Byrum’s with a parking lot full of pickups?

Because places like Byrum’s aren’t just stores or cafes. In little communities barely big enough to have names, these businesses hold North Carolina together.

Kathleen Purvis is the food editor for The Charlotte Observer. Her most recent story for Our State was “High on the Hog” (January 2012).